A great speech is not only about the words you speak but also about how you speak, including the tone and body language. What about a great speech that warms the heart? That goes a step further. It gives birth to myriad emotions within you and is remembered always.

Here are the top ten heart warming speeches made by Indians. Don’t be surprised if some ‘famous speech by an Indian’ does not make it to the list, as we have new entrants. It is because the criterion here is that it needs to warm the heart. The list is as per the year in which it was delivered. 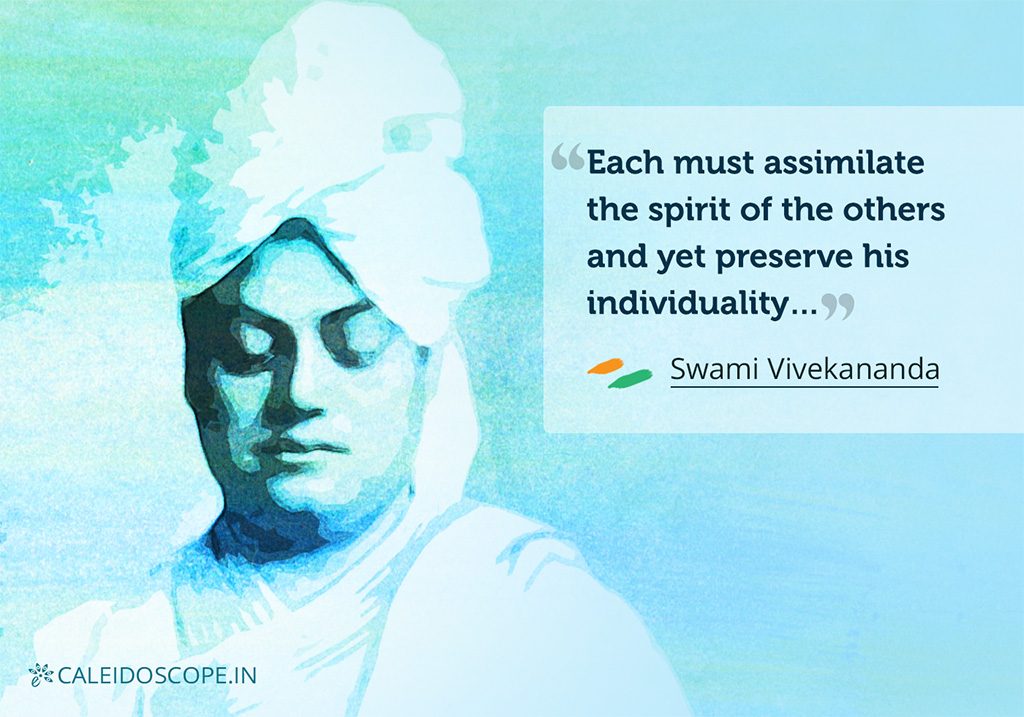 Swami Vivekananda gave this speech at the World Parliament of Religions at the Art Institute of Chicago in 1893. His initial salutation, “Sisters and brothers of America” got a standing ovation from the 7000 plus present there. Not only did this speech introduce Hinduism to North America but also sought to explain the reason for disagreement between different religions. He also said that for Indians, religion was not the need of the hour and that he sought aid for the impoverished people of the land. His lecture left a deep impact on the Americans.

We Recommend…
Swami Vivekananda: A Biography 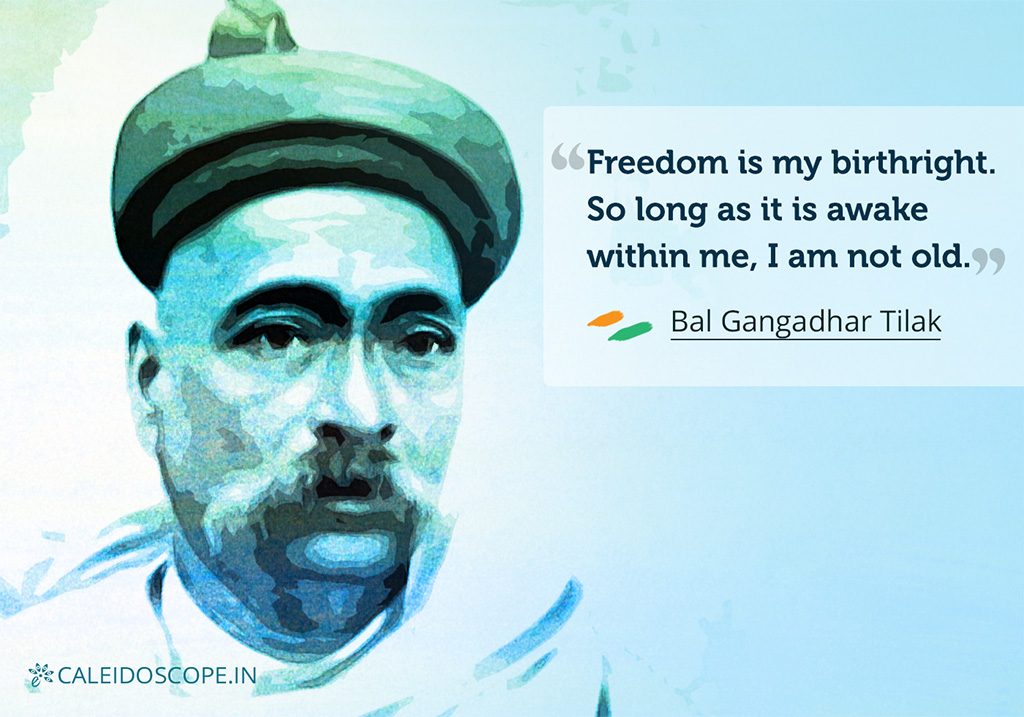 “Freedom is my birthright. So long as it is awake within me, I am not old.”

In 1908, Bal Gangadhar Tilak was sentenced to six years imprisonment at Mandalay Jail in Burma for his rebellious writing. To revive the Nationalist Movement when he returned, he founded the Home Rule League in 1916. Together with Annie Besant, he toured the country telling people in simple language the meaning of home rule or Swaraj. Thus the nationalist spirit slowly began to see a re-awakening. Tilak gave this heartwarming speech, at the first anniversary of the formation of the Home Rule League, in 1917, at Nasik. 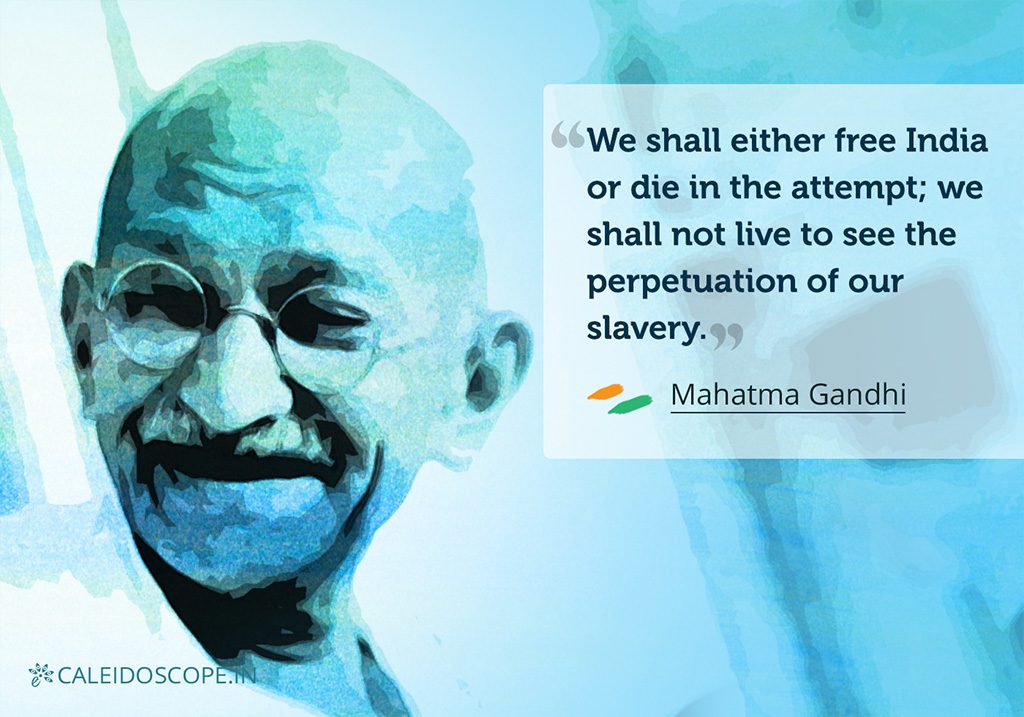 “We shall either free India or die in the attempt; we shall not live to see the perpetuation of our slavery.”

Mahatma Gandhi spoke these words on August 8, 1942 while addressing the A.I.C.C. at the Gowalia Tank Maidan (now August KrantiMaidan) in Bombay on the eve of Quit India movement. The words ‘do or die’ in the speech reinstates his strong belief in the fact that determined passive resistance was the best way to free the motherland from the British rule. The words were strong enough to make the people of the land rise up as one for freedom, causing uproar and eventual imprisonment of many. Read full speech here.

We Recommend…
The Story of My Experiments with Truth Mahatma Gandhi 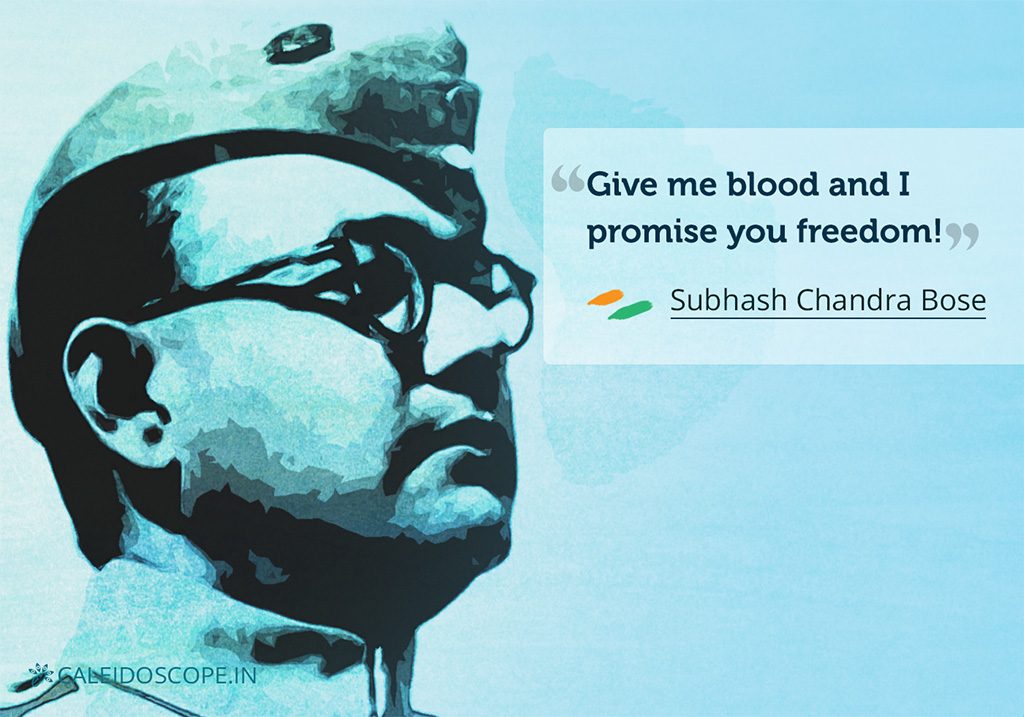 “Give me blood and I promise you freedom!”

Netaji said these words in Burma in July 1944. He escaped his house arrest in Calcutta in 1941 and escaped to Germany to establish the India Legion. But when he began to face difficulties he moved to Singapore where he started the Azad Hind force. This army fought the British but the campaign failed. Bose, however, refused to give up hope. He strongly believed that the British were fast losing ground and India would surely taste freedom soon. Thus was delivered Bose’s best-known speech which inspired the youth and became their anthem during India’s struggle for independence. Read the full speech here. 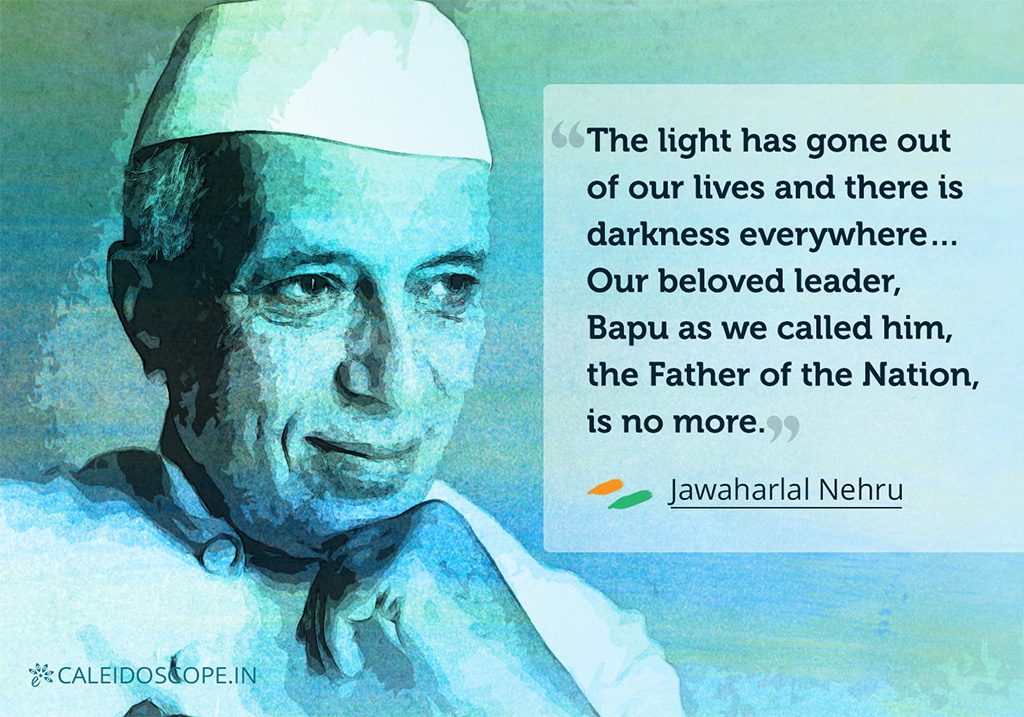 “The light has gone out of our lives and there is darkness everywhere…Our beloved leader, Bapu as we called him, the Father of the Nation, is no more.”

Jawaharlal Nehru delivered this moving speech extempore on 30th January 1948 following the assassination of Mahatma Gandhi. The helplessness and the sorrow of the masses was reflected in his voice too when he spoke unrehearsed over All India Radio. The good orator that he was, his choice of words and phrases brings out the poise that he maintained even during the hour of sorrow. He also made a plea against communalism while asking the people to remain calm. Read the full speech here.

We Recommend…
The Discovery of India by Jawaharlal Nehru 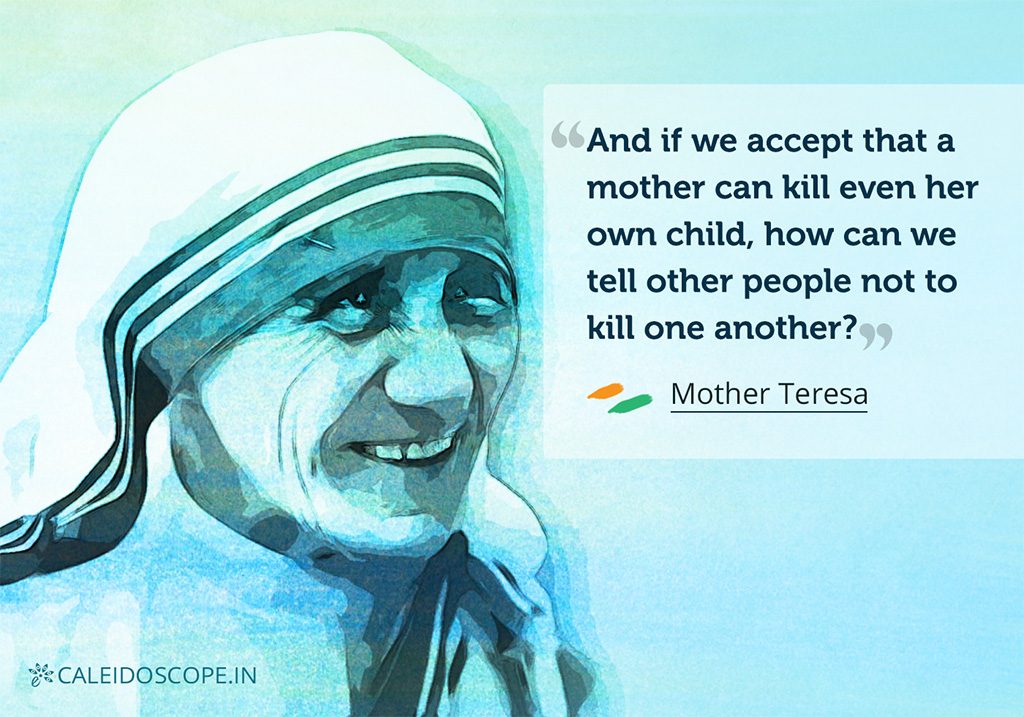 “And if we accept that a mother can kill even her own child, how can we tell other people not to kill one another?”

In 1994, when Mother Teresa spoke at the U.S. National Prayer Breakfast, it startled many. Even though a nun, she didn’t shy away from offering definitive views on topics like abortion. In front of a gathering of over 3,000 people she criticized abortion even though two staunch supporters – President Bill Clinton and Vice President Al Gore – sat right there, uncomfortably. Robert Dugan, an official of the National Association of Evangelicals said that her speech was “as bold a prophetic confrontation as I’ve ever witnessed.” Watch the full speech here. 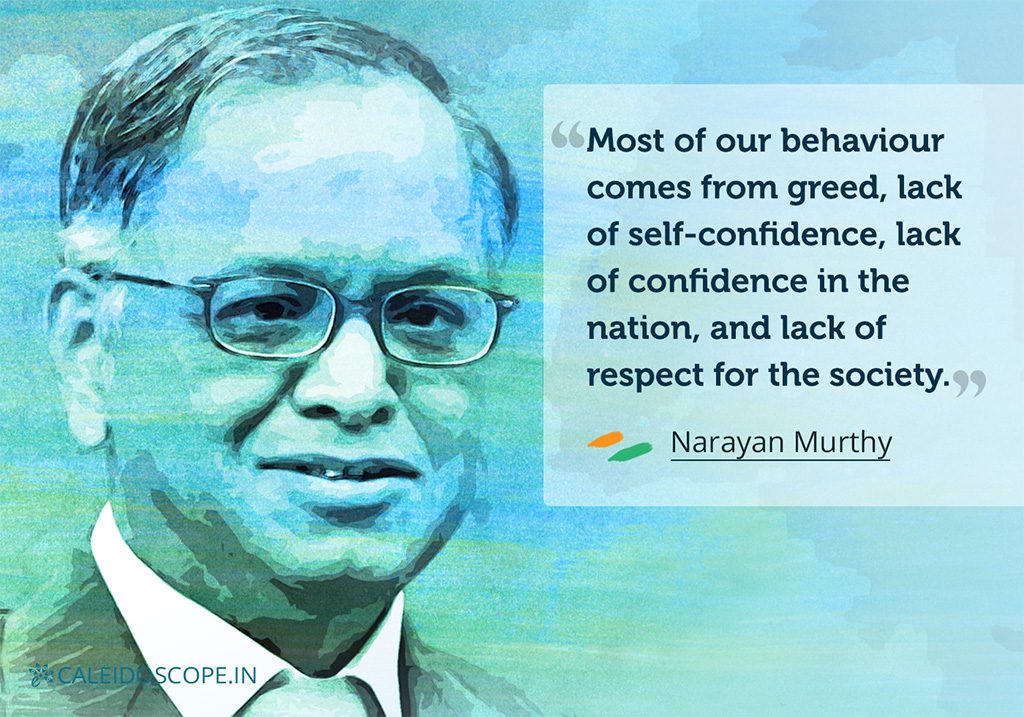 “Most of our behaviour comes from greed, lack of self-confidence, lack of confidence in the nation, and lack of respect for the society”

In 2002, Narayan Murthy delivered this speech on The Role of Western Values in Contemporary Indian Society at the Lal Bahadur Shastri Institute of Management in Delhi. By comparing Indian and Western cultures, Murthy eloquently tells how the former lacks in civic sense. Through a didactic tone he urges the Indians to bring about a social change. He uses witty remarks and allusions. The urgency in his voice will make anyone sit up and listen to him. The words were honest, factual and inspiring. Read the full speech here. 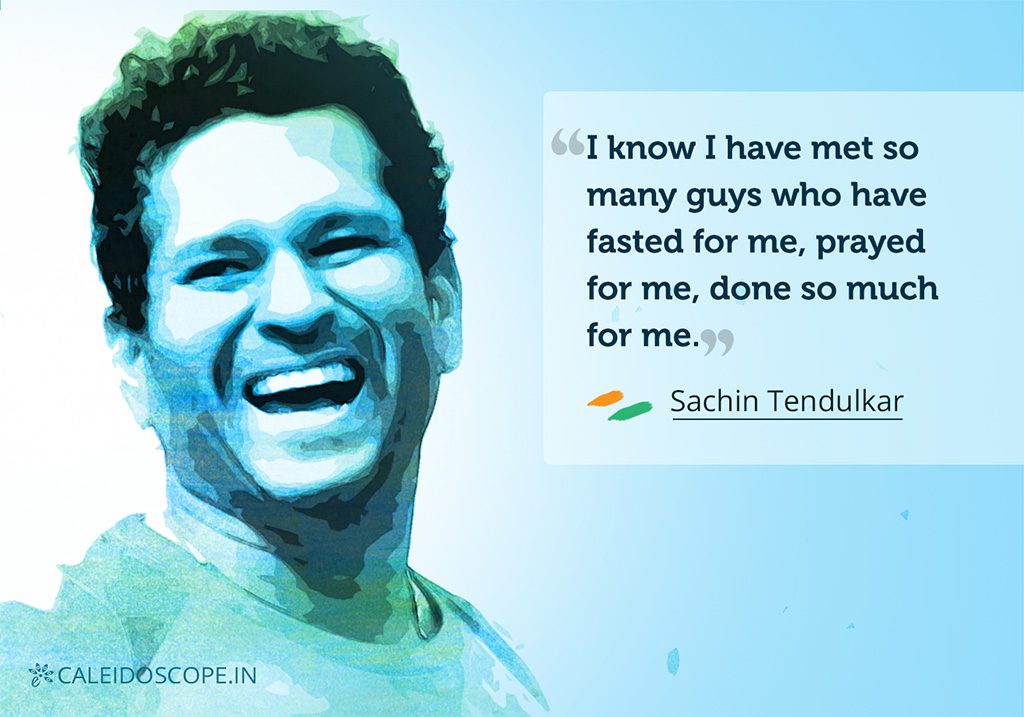 “I know I have met so many guys who have fasted for me, prayed for me, done so much for me.”

Sachin Tendulkar played his last day of international cricket at the Wankhede Stadium. And millions witnessed the farewell speech of the ‘master blaster’ in 2013 after India sealed the series against West Indies. Everyone present including his mother and former colleagues were left emotional and misty eyed including the man himself who rarely lets any emotion show on his face. Sachin had surely hit a straight six into every one’s heart with his speech. Watch the full speech here.

We Recommend…
Playing It My Way by Sachin Tendulkar 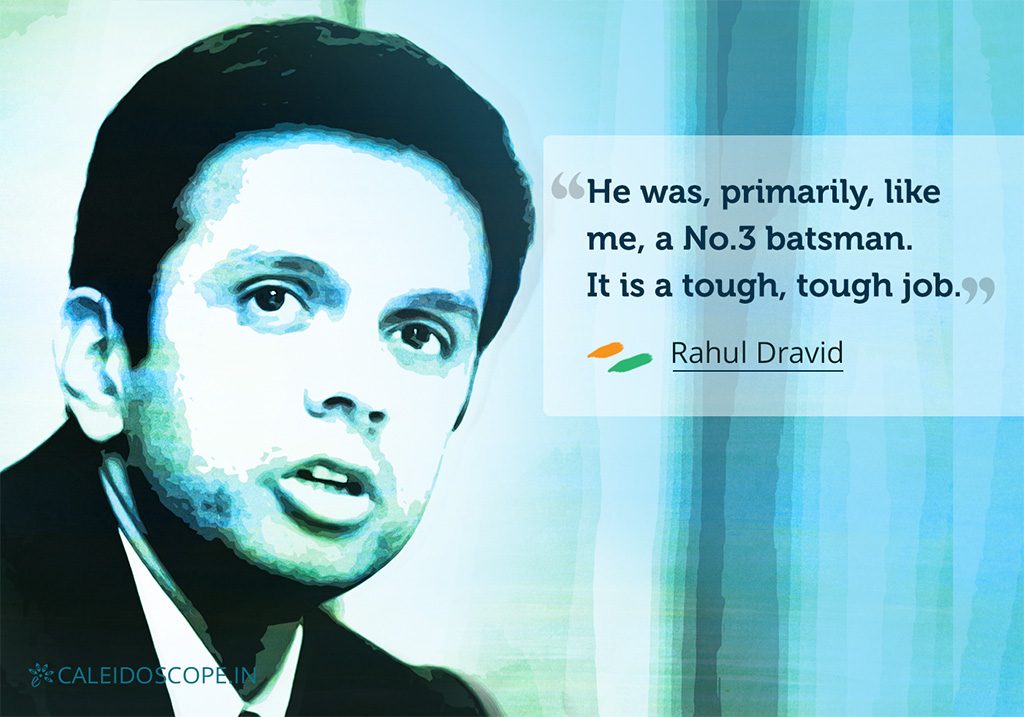 When Rahul Dravid spoke at the Sir Don Bradman Oration in Canberra in 2011, he became the first non-Australian to do so. His speech reflected his character – precise, erudite, meticulous and thoughtful. It was indeed heartening to hear the gentleman of Indian cricket speak about the greatest legend that the sport has ever seen. And when the occasion was over, the nature of conversation had changed. Instead of talking about the grand venue, it centered more around the speech and the speaker. While many adjectives have been used to describe this speech, the oft-repeated one has been ‘insightful’. Listen to the full speech here. 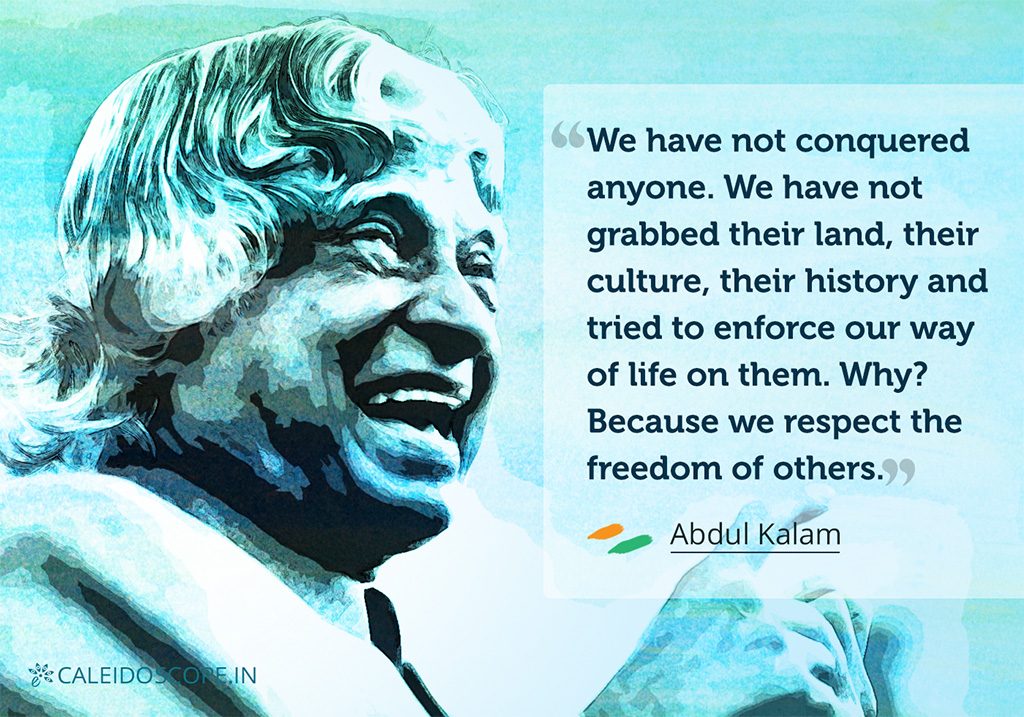 “We have not conquered anyone. We have not grabbed their land, their culture, their history and tried to enforce our way of life on them. Why? Because we respect the freedom of others.”

In the speech that Abdul Kalam delivered at the Indian Institute of Technology, Hyderabad in 2011, he outlined his visions for India. He pleads his countrymen to become more involved in the nation-building process. And his speech gains credibility because he speaks about his experiences at the Indian Space Research Organization. He manages to unite the listeners by using the term ‘we’ instead of ‘I’. It is definitely one of his finest speeches because not only is it dignified throughout, but the words also pull you out of your comfort zone by the sheer simplicity and hard truth of it. Read the full speech here.

We Recommend…
Wings of Fire: An Autobiography of Abdul Kalam

We Recommend…
The World’s 100 Greatest Speeches