Gutsy Indian Sports Women, We are Proud of You

India is really strange! At one end, our nation is troubled with problematic social issues such as gender discrimination and female foeticide; on the other end, some gutsy women are proving that the country offers the right platform to excel. These tough women are excelling in tough sports which were once considered completely a male bastion! This article is a tribute to some of those gutsy Indian sports women who have conquered new peaks and proven it in a male dominated world. 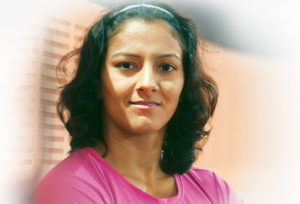 Coming from a family of wrestlers, it would have been natural for Geeta Phogat to take up wrestling. However, when you realise she grew up in Haryana and without a single female wrestling champion to emulate, it is a stupendous feat that she really did! In fact, her inspiration comes from another sport: Karnam Malleswari! Encouraged by her father, Mahavir Singh, Geeta Phogat began wrestling in 2000. She rapidly rose in this male sports bastion to become a national champion and win gold in the 2003 Asian Cadet Championship. After winning the gold in the 2007 Junior Asian Championship, she moved to the senior level. Geeta became a national celebrity when she won the gold in the 2010 Commonwealth Games held in New Delhi. Geeta feels confident about her chances in the 2012 London Olympics since she has defeated both the World and Asian champions in her 55kg weight category. While she is the first Indian woman wrestler to qualify for the Olympics, sadly, her equally talented younger sister, Babita Phogat could not qualify! Pic courtesy – India Today 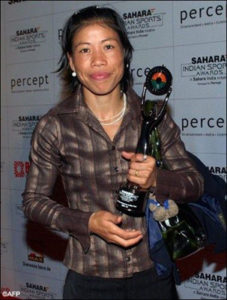 Another tough woman breaking the male bastion is M C Mary Kom. Unlike Geeta, she has nothing to prove. She has been the world champion, for an astonishing five times in the last decade. It is hard to believe that her first gold in the world level came way back in 2002, Women’s World Amateur Boxing Championships. Another astonishing feat was her comeback after a two year sabbatical for her pregnancy, which earned her the title, ‘Magnificent Mary’ from the International Boxing Association! However, in her early days, Mary Kom had to hide her pugilist interests from her family in Manipur. After she participated and won the silver medal in the 2001 World Amateur Boxing Championships at the age of 18, her family realised her seriousness. An Olympic medal is missing from her kitty since boxing for women has just been introduced in the London Olympics in 2012.Pic courtesy – MSN India Sports 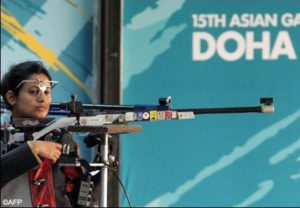 Heena Sidhu, Shagun Chowdhary, Annu Raj Singh and Rahi Sarnobat – if all of a sudden, four Indian women are competing in the shooting event in the London Olympics, the credit should go to Anjali Bhagwat for pioneering this game. Yes, the immense popularity attained by Abhinav Bindra in 2008 did contribute significantly, but Anjali Bhagwat was already a well known icon for women’s shooting by that time. She was the first Indian female shooter to feature in an Olympic final in 2000, first one to win ISSF Champion’s Trophy in 2002 and the first one to win the gold in the World Cup in 2003. Although she has won 31 gold and 23 silver medals in international competitions including four golds in 2002 Commonwealth Games, an Olympic medal eluded her! Pic courtesy – MSN India Sports 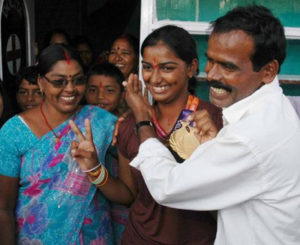 This autorikshaw driver’s daughter from Ranchi is bound to make waves at the 2012 London Olympics. Deepika Kumari, the 18 year old daughter of Shivnarayan Mahato, already has the world at her feet: World Youth Archery Championships in 2009, gold medals at the 2010 Commonwealth Games, and World Cup gold at the individual Recurve event in 2012. Despite being ranked world no.1, success has not got into this humble village girl’s head. She still recounts the struggle her parents had to undergo to buy her equipment to practice. Apart from aiming for mangoes with stones in her village in Jharkhand, the Tata Archery Academy in Ranchi played a major role in honing her skills to become a world champion! Pic courtesy – MSN India Sports 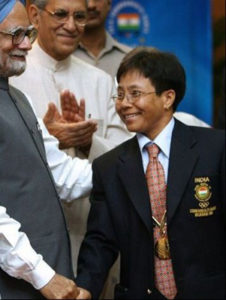 Kunjarani Devi is another Manipuri strong woman to gain limelight in the international sports arena. This diminutive weightlifter began her career with a silver medal in World Women’s Weightlifting Championship in 1989 and she followed it up with successive medals in seven world championships. She won bronze medals in both the 1990 Beijing Asian Games as well as 1994 Hiroshima Asian Games. Controversy arose when the Indian Weightlifting Federation preferred to choose Karnam Malleshwari for the 2000 Sydney Olympics citing that she has better chance in her 69kg weight category than Kunjarani in her 48kg weight category. While her compatriot basked in the glory of winning the first ever medal in the Olympics, Kunjarani faded away from public eye after she was slapped with a six month suspension due to drug use in 2001. However, she made a spectacular comeback in 2006 when she won the gold medal at the Melbourne Commonwealth Games by lifting a Games record weight of 166kg. Pic courtesy – MSN India Sports 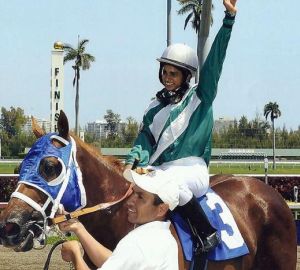 Yet another male dominated sports conquered! Aparna Das Battula becomes the latest one to take over another men’s sports. She is not only the first Indian woman jockey but also the first Indian woman jockey to get a jockey licence in the US. During her college years, she began training for horse riding at the Bangalore Turf Club. However, after her training she tried her to get a licence as a jockey on the Indian Horse Racing circuit. After a few years of unsuccessful attempts, she applied for a scholarship at the North American Racing Academy (NARA), Kentucky, US. At a young age of 23, she is not a licenced jockey, she has also won her first race with her horse, ‘River North’. Pic courtesy – The Hindu 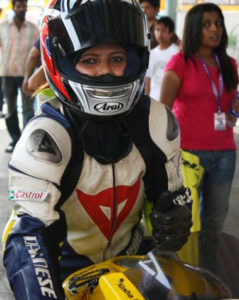 KhatronKe Khiladi, MTV Stuntmania, MTV Roadies – umpteen number of reality shows on TV depict happening women doing some daredevilry to achieve instant fame. However, none of these dare devils are actual bikers. Rarely would you find a biker woman displaying her skills in a motocross or bike racing event. Fortunately, Alisha Abdullah arrived on the Indian racing scene as a breath of fresh air. This super bike racer began her career in go-karting and won the 2004 MRF National Go-Karting Championship and the Best Novice Award in the National Formula Car Racing when she was just 13! Being the daughter of famous racing star R A Abdullah does help! Pic courtesy – Alisha abdullah.in

This woman is really unbelievable! Rachel Thomas is India’s first civilian woman skydiver who began skydiving way back in 1979. Since then she has put in 24 years in the sport, represented India in style & accuracy competitions, later as a international judge and also as a delegate for India in parachuting commissions. She hosted the First International Parachuting Commission in 1994 at Agra which was attended by 35 Countries by 150 Delegates. Rachel Thomas has 650 freefalls to her credit which was done mostly abroad. She has even skydived on the North Pole in 2002 which is yet another first for an Indian! Pic courtesy – Women Skydivers of India