K V Gururaja and his World of Frogs

I was having the most interesting conversation with a researcher called K V Gururaja. We were talking about frogs (anurans). There were times during the conversation when I listened agape, like when he told me about frogs that engage in deadly combat and one particular bull frog even strangles other frogs to defend its territory. Dr. K.V. Gururaja has been studying frogs for the last 15 years. His fascination for them was brought about, curiously, by his love for birds! During his master’s degree, his professor suggested that he study the birds in the university campus. Having already listed them, he wanted to do something else. He was then introduced to the world of amphibians and has not looked back since. Even now, he is constantly spellbound by them.

Frogs in India: Then and Now

Before independence, the British, Dr. Gururaja told me, had conducted a systematic study of frogs in India. Later in the 1940s, a zoologist named C.R. Narayan Rao, contributed most to the field of amphibian study, by describing around 19 species of frogs. Since then, very few new frog species have been discovered. Amphibian study requires people to spend long hours in the forest at night and there were very few researchers, who did this then. Another important reason was that people rarely looked at any frog species as an undiscovered one. It was only after the peculiar-looking Pignose Frog was described in 2003 that more people became interested in frogs. There are currently 345 different species of frogs, toads, salamanders and caecilians (together called amphibians) in India. Some of these species are found exclusively in the Western Ghats habitat. As interest in the field of amphibians grows, more species are being discovered every year. 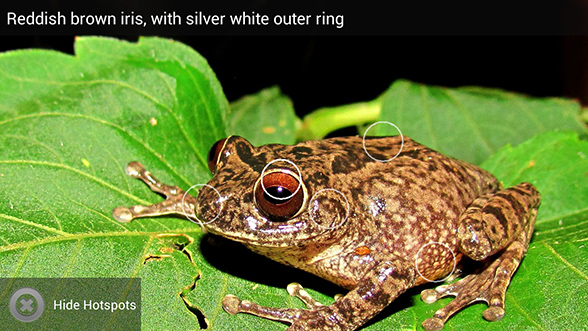 Where Frogs are Found and What They Do

As our conversation progresses, I begin to understand why Dr. Gururaja is so passionate about Anurans. Frogs, like all amphibians, are cold-blooded creatures that have to bask in the sun to maintain body temperature. They tend to become active only during the night, when the temperature becomes cooler. This is when Dr. Gururaja sets out to study them with a torch in hand. His day begins at 9 in the night and goes on till the wee hours of the morning. He feels there is so much to study about frogs since there is such variation in their behaviour and habitat. They have four broad habitats: aquatic, terrestrial, fossorial (living underground) and arboreal (tree-dwelling). Some frogs occupy extremely specialized habitats; for instance, the Ochlandra shrub frog found exclusively inside the hollow reeds of Ochlandra bamboo, which is used to make flutes. Or the Pignose frog which lives 8 metres underground and surfaces for only 15 days in a year! 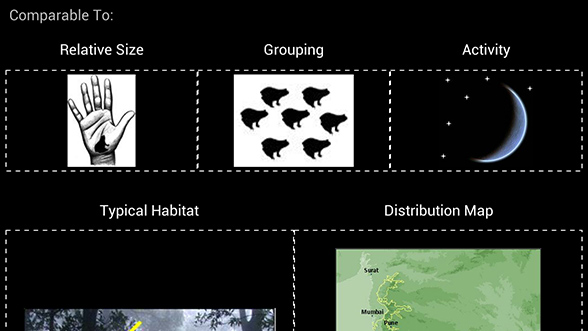 Information about the Ponmudi bush frog on the FrogFind app

Frogs have an intriguing behaviour too. In an environment where there is a lot of ambient noise, male frogs have a tough job signalling to others by croaking. Some frogs (torrent frogs – Micrixalus saxicola) complement these auditory signals with visual ones. They extend their limbs outward repeatedly in an act called ‘foot-flagging’, to signal other frogs that they are defending their territory. Dr. Gururaja’s favourite behaviour is of a frog found in a specialized habitat called Myristica swamp. Once the monsoon is over, the female of this species carries her mate on her back to a stream, where she makes a cavity to lay her eggs. She then carefully covers it up and goes away. Dr. Gururaja is intrigued by questions like why they wait till the monsoon ends and why they cover up their eggs!

During monsoon, K V Gururaja is frequently invited to go on nature trails conducted by different organisations. He leads people into the forest to teach them about frogs and toads. He tells me that there is an increasing interest in amphibians over the past few years. Kids especially, find them fascinating and they do not have any inhibitions about touching them. Wildlife photographers join in on these trails and document the anurans they see. This helps getting more people interested. 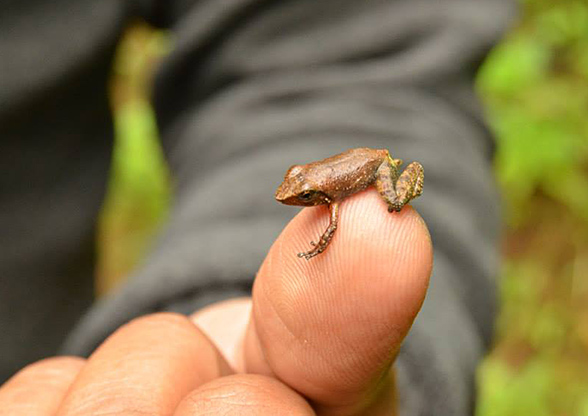 Habitat loss and fragmentation are the major threats that are faced by frogs. There are 17 Indian frog species that are listed as critically endangered by IUCN, indicating a high risk of extinction. Frogs legs are a delicacy in some parts of southern India. India used to be a major exporter of frog legs, until a ban was imposed in the 1980s. There are still places in Kerala and Goa where frogs legs are sold. Pesticides sprayed on crops, which find their way into water bodies also harm frogs as most species lay eggs in water and tadpoles are unable to grow in contaminated water.

Invite Frogs to your Garden

Frogs are an important link in the food chain as they curb the population of pests like mosquitoes. Dr. Gururaja tells me that fewer frogs are found in city due to unfavourable conditions. Keeping a small pond in your garden can help to attract them. Apart from being relieved of the mosquito population, you will also get a chance to study their behaviour.

Talking to KV Gururaja about frogs was like learning about friends that were close to his heart. There is no other animal that makes him tear his eyes away from frogs, except for the snake. They share his interest in frogs, albeit for a different purpose. I learnt quite a lot about frogs in the one hour that I interacted with him- enough to pique my interest and make me want to go frog hunting so I could watch some of their behaviour first hand.

Last year, Dr. Gururaja wrote a book called the “Pictorial Guide to Frogs and Toads of Western Ghats”, covering 73 of the 156 species of frogs and toads found in the Western Ghats. Soon after the book was published, two software developers approached him, wanting to develop an Android app based on the book. After lengthy conversations and emails sent back and forth, FrogFind was born. It is India’s first ever mobile application to identify frogs and is a delight to use. Frogfind contains information about the habitat, distribution, key identifying features, time of activity and ecological status of frogs and toads in a visual and intuitive manner.
The app’s next version will allow users to find frogs in a 10-kilometre radius around them and will be released on the iOS platform. The team will also be working with the India Biodiversity Portal to enable the app to identify frogs based on their call, which is unique to each species. Version 2 will be used as a citizen science project, where wildlife enthusiasts and lay-persons can identify frogs and capture the location of where they were found. This helps scientists to monitor and build distribution maps of different species, over large areas.