Stand Up Comedians In India Who Are Revolutionising The Way India Thinks!

The exposure that the Indian audience and viewership have received for stand-up comedy has been on a splurge since the last few years. With online platforms like Hotstar and Amazon Prime Video, several young talents have been able to put forth much of their content and develop their sets with experience.

Here we present a few of the excellent new-age stand up comedians in India who will make you think with their comic sense.

Sumukhi stepped into the land of stand-up comedy in 2013, when she had joined the improvisational comedy show, ‘The Improv’. Her ability to captivate the audience with her well-rounded performances first stood under limelight through her character of Sumukhi Chawla in the mockumentary web series named ‘Better Life Foundation’. Her titular role in Amazon Prime Video’s ‘Pushpavalli’ and her brilliantly portrayed character in ‘Go Straight Take Left’, co-written with comedian Naveen Richard, are two of her most recognised endeavours. Her earnest and bold personality is fresh in the new-age comic industry, and she also offers a strong, feministic vision of things.

The 2012 victor of Comedy Central’s India’s 3rd Best Stand Up Comedian has popular acts like ‘Kaksha Gyarvi’, ‘Hain Humare’, ‘Chacha Vidhayak’ and ‘Haq Se Single’ to glorify his crown. Popularly known as ‘Sakht Launda’, Khan has also been part of the mentor’s panel in ‘The Great Indian Laughter Challenge’, judged the second season of Amazon Prime’s Comicstaan and is an inspiration to many new-age and aspiring comics. 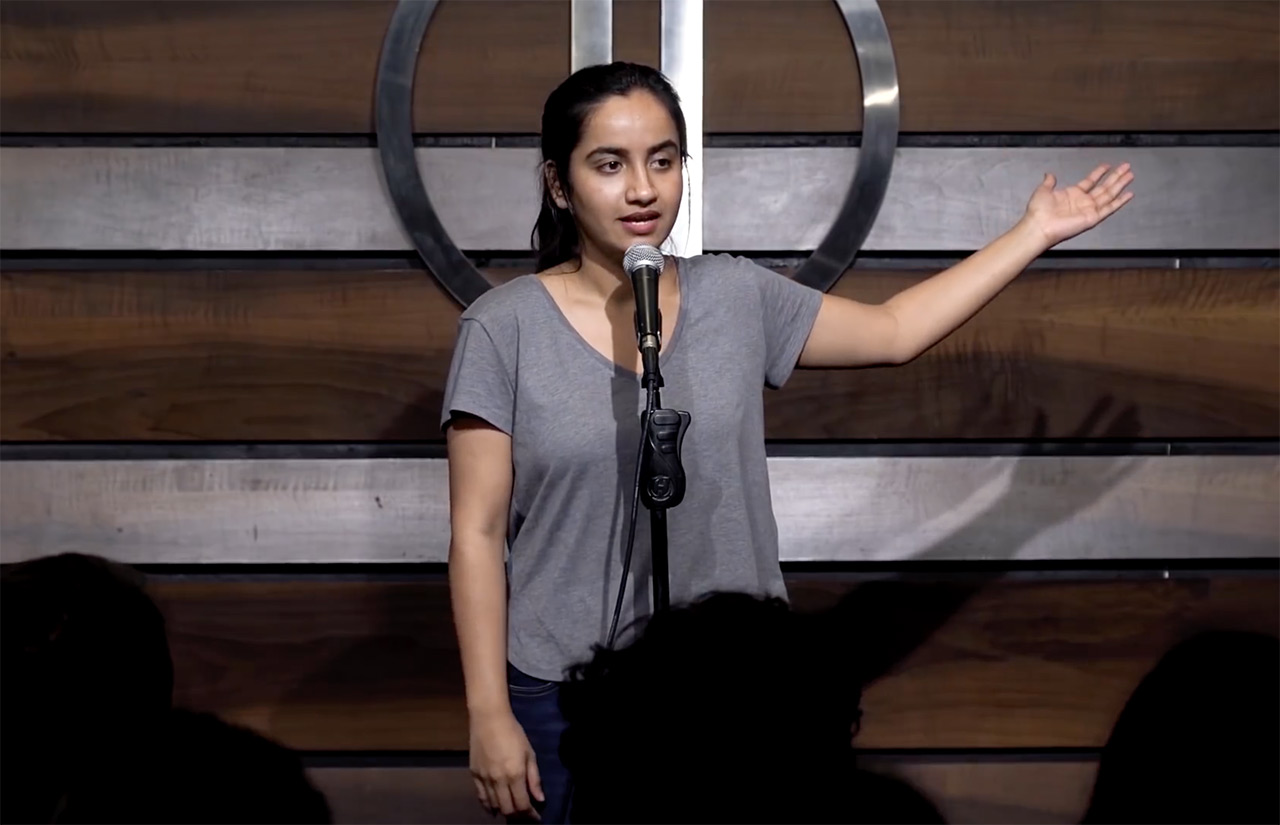 A smart ball of cheerful energy, Urooj Ashfaq first dug her stronghold in the TLC show ‘Queens of Comedy’, where she battled as a finalist. Urooj has travelled across  India putting up her bright and hilarious stand-up acts, and also put her wits to best use as a writer on numerous comic projects, including the likes of ‘Better Life Foundation’ and ‘Die Trying’. Taking unfaltering steps into the controversial field of religious bigotry, her set titled ‘Uber Driver and Grandmother’ is her first independent YouTube venture. 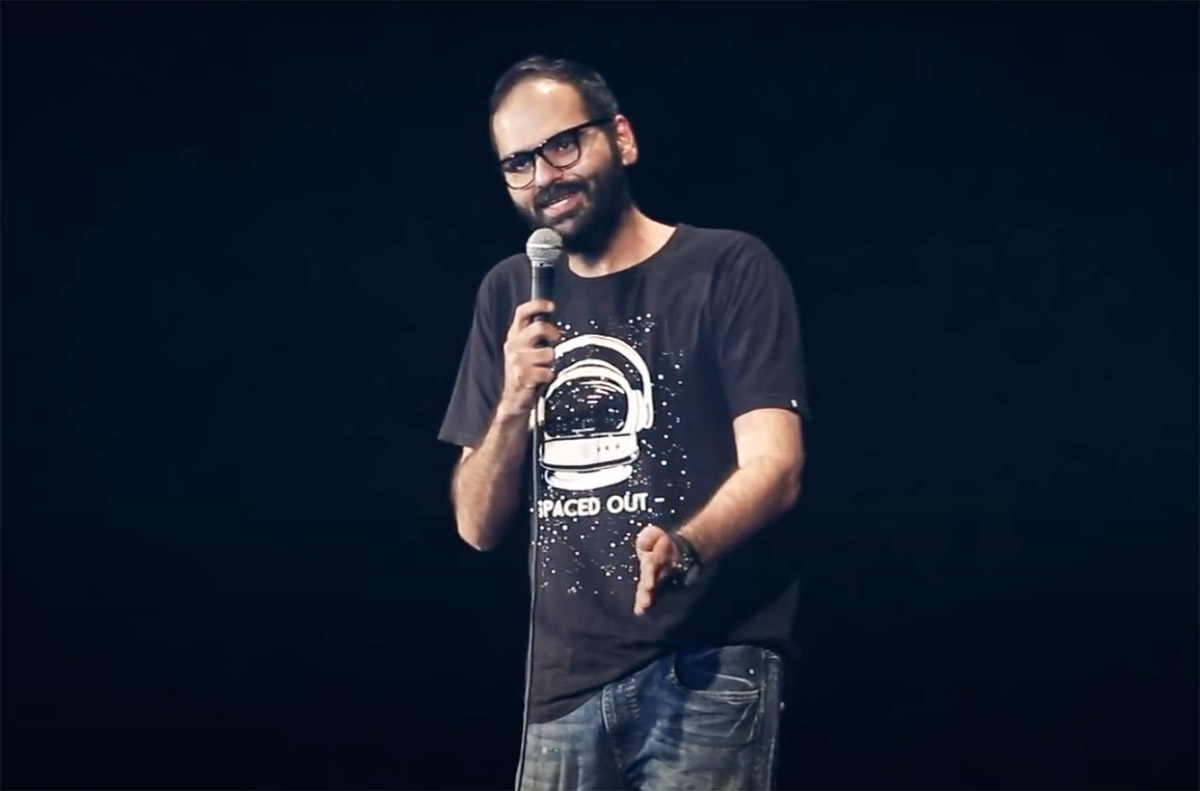 Notable for his observational comedy and political satire, Kamra started the web-series ‘Shut Up Ya Kunal’ in 2017, featuring conversations with guests and clips and segments of news and debates that were edited humorously. His March 2017 Youtube video ‘Patriotism and the Government’ brought in a surge of controversy, where he mocked demonetisation and fanatic nationalism.

Having debuted as a stand-up comedian in the first season of Comicstaan, Mohanraj, with her scrutinising wit, has written scripts for shows like ‘Son of Abish’, ‘Behti Naak’,  One Mic Stand, On Air with AIB and the second season of Comicstaan. A performer of various venues of comedy like NCPR and Canvas Laugh Club, Mohanraj’s interaction with the audience is a major part of her performances, which revolve around her personal observations and perceptions. 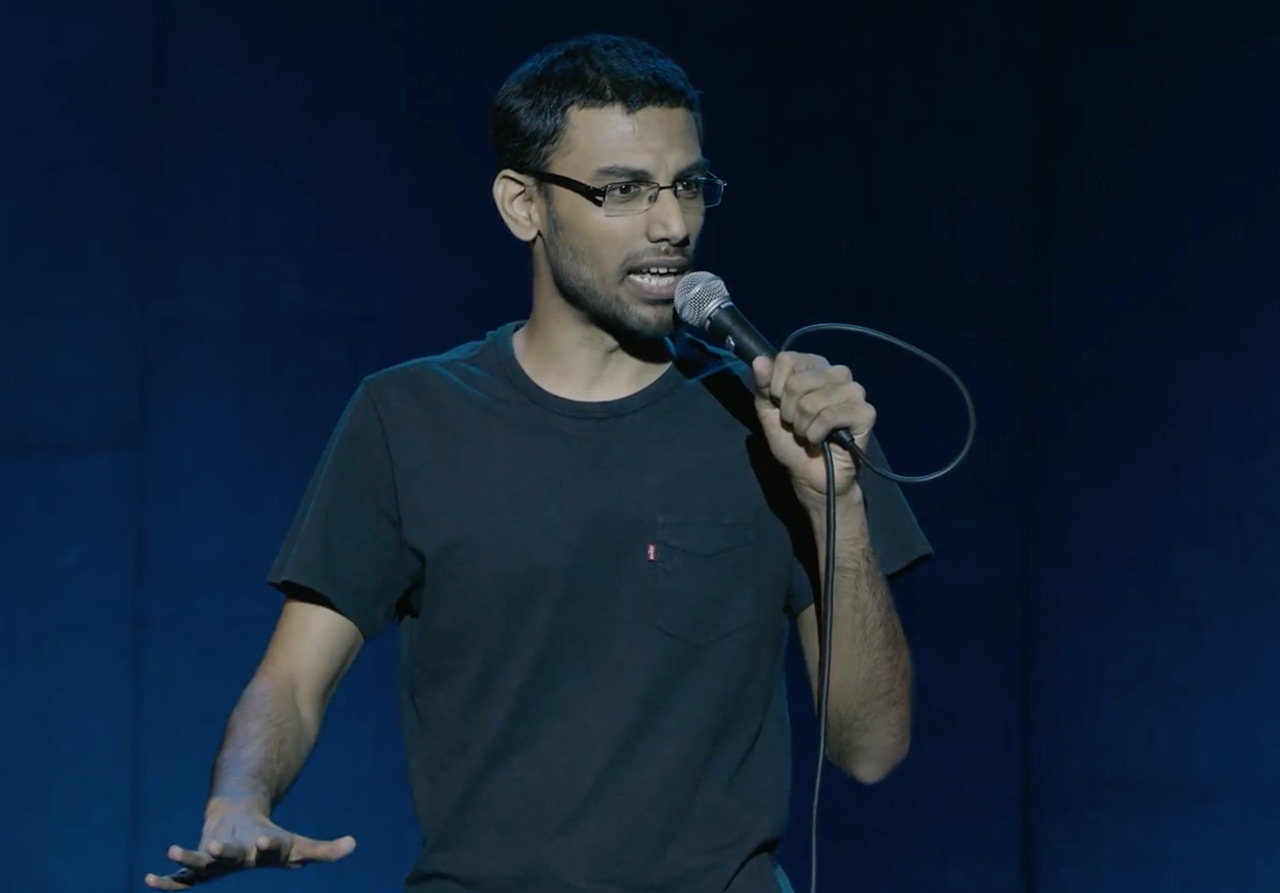 Biswa Kalyan Rath made a prominent mark in the Youtube comedy series ‘Pretentious Movie Reviews’. He delivers a set unlike any other where he makes derivations from his education at IIT-Kharagpur, his knowledge in mathematics and language, and his introspective observations towards life. His comedy special titled ‘Biswa Mast Aadmi’ is shaped with sarcastic clarity and full of ironic anecdotes. Biswa’s unique style of making his lines land on the audience using ranting techniques gives an exciting flavour to his performances and is even enhanced by his self-assured personality.

Subramanian has been performing since 2014, when he broke into the stand-up scene by winning competitions like Virgin Pants and Canvas Laugh Club. He also won the first ever YouTube Comedy Hunt, along with his friend Kumar Varun, for their channel Random Chikibum. His popular one hour solo is titled ‘Kal Main Udega’. Drawing his inspiration from the reality of the common lifestyle, Subramanian aims to shape his comedy such that his audience can find relatable events and feelings in his performances.

Leaving his job at “Bain and Company’ to pursue his passion for comedy, Abhishek Upamanyu of Delhi uploaded his first ever video titled ‘Indian Insults and Comebacks’ on Youtube in 2016. He speaks of things as they are, deftly utilising his style of delivering quick-witted and blatantly honest lines. His excellent skills in observation and perception is evident in his two popular comedy shows ‘Thoda Saaf Bol’ and ‘Jealous of Sabjiwala’.

One of the first Indian women to endeavour into the land of stand-up comedy, Aditi Mittal was invited by the BBC for the prestigious 100 Women Conference in London in 2013. She performed her first solo show ‘Things They Wouldn’t Let Me Say’ at the Canvas Laugh Factory, Mumbai. Her next specials are called ‘Girl With Mic’, ‘Global Village Idiot’ and ‘Mother of Invention’.  Creator of Dr. (Mrs.) Lutchuke, Mittal has said that her brand of humour is personal; her material significantly ranges over diverse topics and fields.

Anubhav Singh Bassi secured his roots deep and strong in stand-up comedy when he debuted at an open mic event at the Canvas Laugh Club in 2017. Exposing the absurd norms of examination and evaluation system for studying law, his Youtube video titled ‘Cheating’ had been a major breakthrough in 2019. Bassi’s sets are mostly nostalgic and his content is based on retrospection, especially on his own journey, and is evident in the episodes of his tour set ‘Bass Kar Bassi’.

Kanan Gill rose to fame through the YouTube show Pretentious Movie Reviews, along with his partner Biswa Kalyan Rath. His latest Netflix one-hour special titled ‘Yours Sincerely’, sees him looking back at his past life through the letter which he had written to his future self when he was only 15 years old. Gill has performed hundreds of shows all over the world, including ‘Feeling with Kanan’ and ‘All Correct Opinions’, and has also been a mentor in Amazon Prime Video’s ‘Comicstaan’. 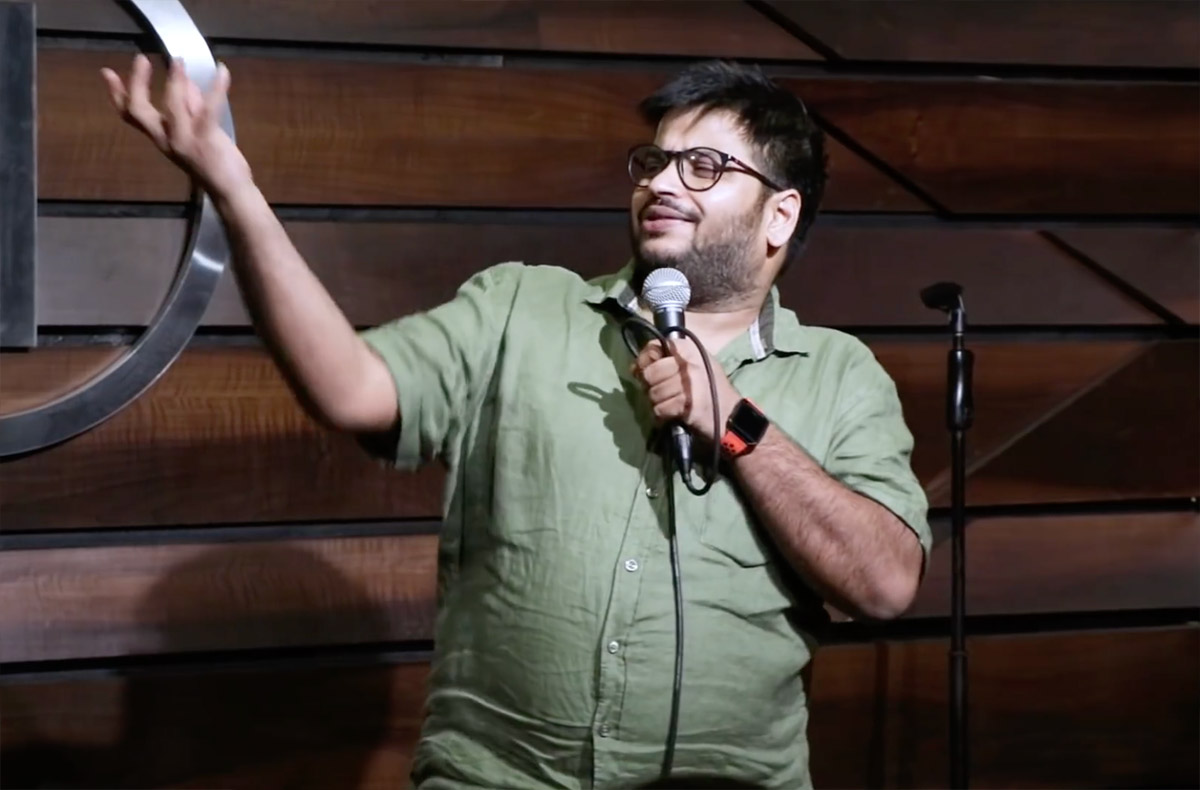 The memorable voice behind several characters in NDTV’s satire ‘Gustakhi Maf’, Sharma leaves an impression on the audience with his acute observations of the struggling youth of India. Sundeep’s stories hit close to home with a deliberate stroke of wit. His one hour special ‘The Sundeep Shawarma Show’ has been received with accolades. 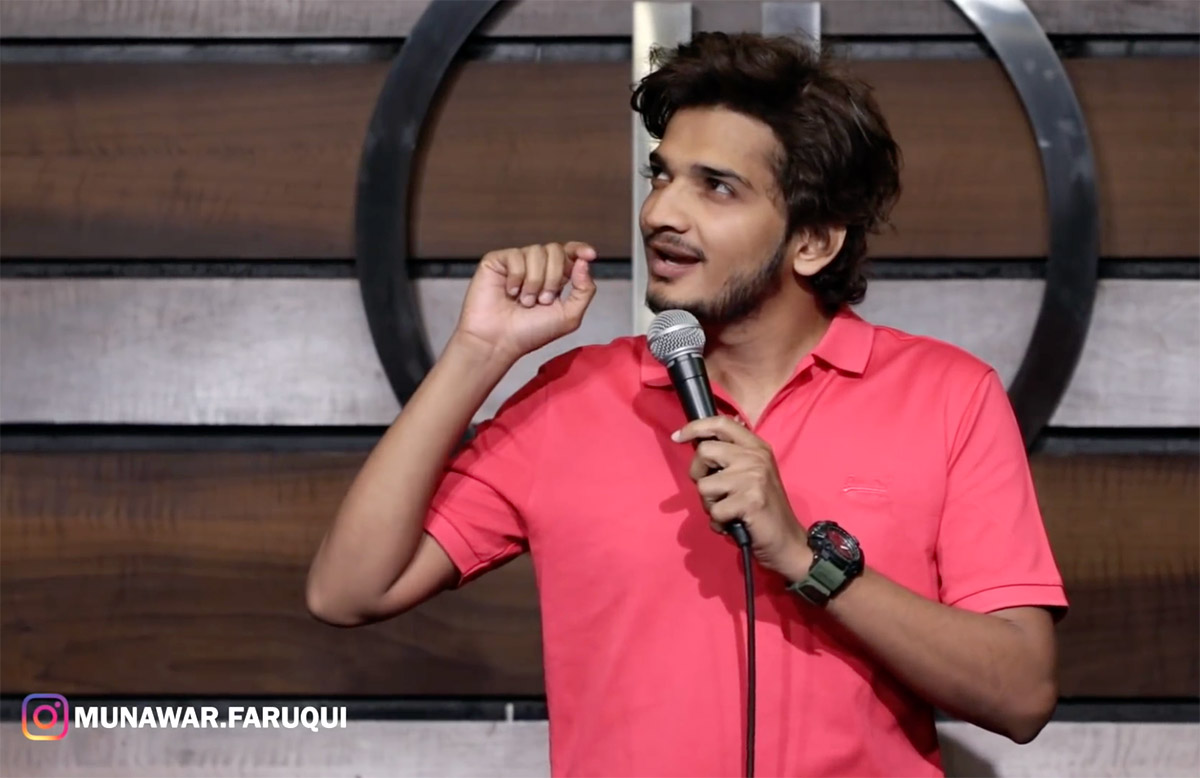 Faruqui’s unabashed socio-political observations are explicitly depicted in his comic acts. His Youtube endeavours are popular among the audience. ‘Nawab, Nehru and Gujarat 2002’, ‘Punjabi Music and Hitler’, ‘Dawood, Yamraj and Aurat’ and ‘PUBG, Arnab and Drugs’ are few of his most viewed skits. 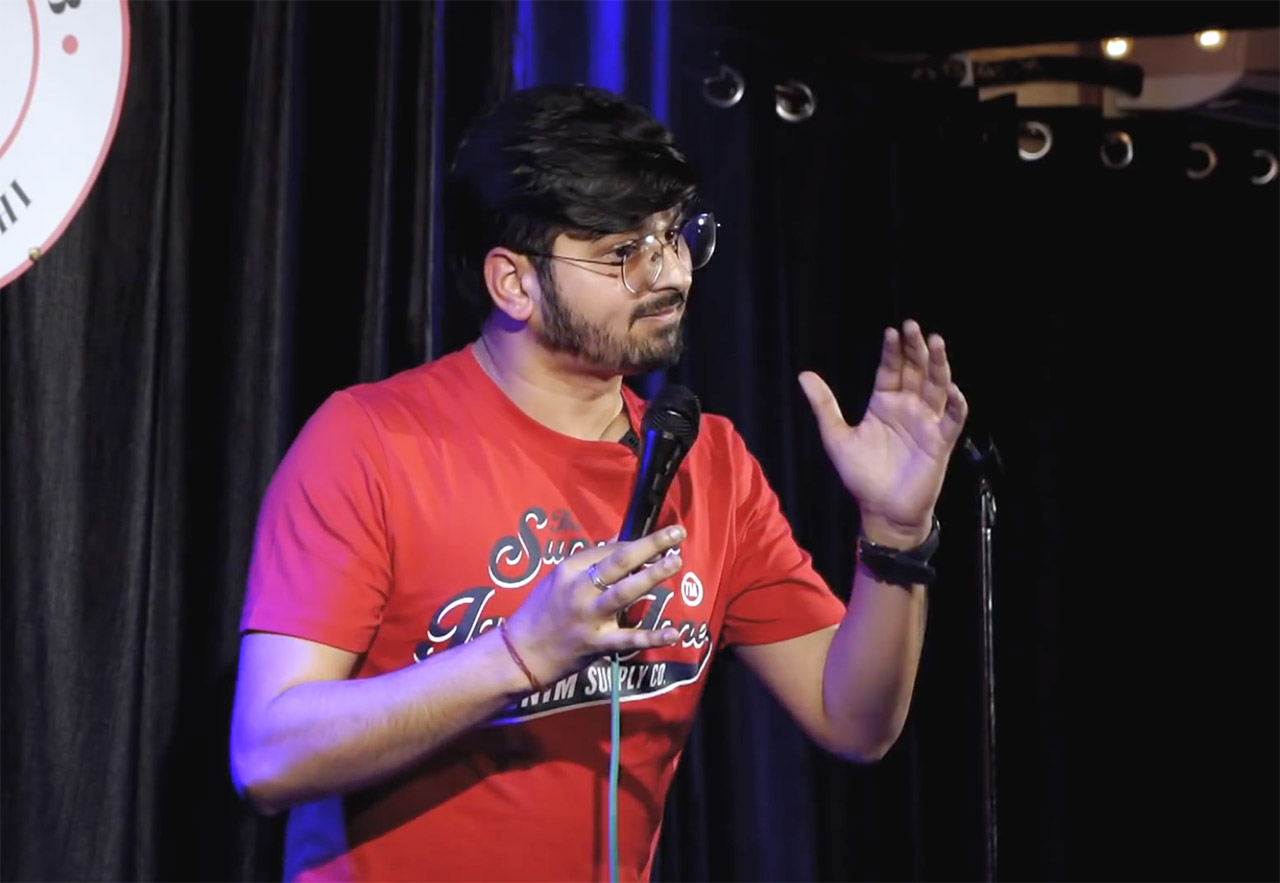 Delhi-based comedian Rajat Chauhan’s, exceptional observation skills render a unique flair of interest to the mundane ways of daily routine and how we deal with it. After completing his engineering, Chauhan decided to follow his passion in the scene of young-age stand-up comedy. Describing himself as a “Storyteller” and an “Attention Seeker”, Chauhan holds shows regularly in the Canvas Laugh Club and other stages. 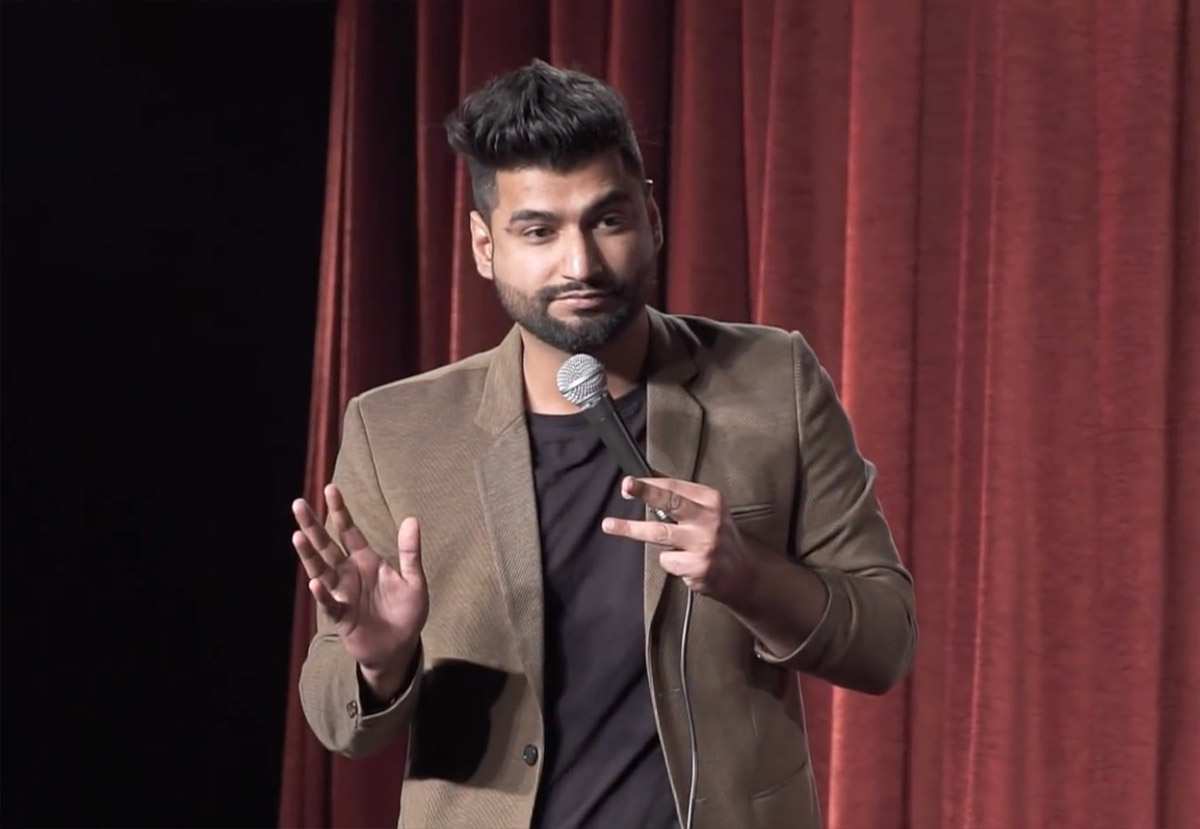 Gujral’s comedy relates to his personal experiences and real-life incidents and people. On the rise since his debut stage show in 2017, Gujral believes that comedy is a natural skill, but requires hard work and dedication to polish it. His Youtube skits include the much-appreciated ‘Indian Reality Shows’ and ‘Shaadi Ke Rasmein’.

Today’s field of Indian stand-up comedy is filled with young voices of brilliant minds. Bold, socially aware, unapologetic and honest, the youth in this ever evolving field present unique outlooks and stalwart values for and towards the society.