In 1893, two men met on a ship sailing from Japan to America. One was an Indian businessman and another was a Hindu sanyasi (monk). After they introduced to each other, the businessman asked the monk where he was heading to. The sanyasi said he was going to represent Hinduism in an international conference in America, while the businessman said he is on a mission to bring steel industry to India. For which the sanyasi replied, “My best wishes for such a beautiful mission. However, I would request you spend time to learn the metallurgical science of making steel, while you try to understand the process of making steel. I would prefer you to start a institute, a laboratory to do advanced research on the subject”. The businessman was awe struck by the sanyasi’s knowledge of science. That sanyasi was Swami Vivekananda.

Swami Vivekananda is such an awe inspiring personality who towers over the visionaries that modern India has seen. Despite being a religious figure, he transcended all barriers – scientists, poets, politicians, all draw inspiration from him. Talking about Swami Vivekananda, Jawaharlal Nehru said “Rooted in the past, full of pride in India’s prestige, he was yet modern in his approach to life’s problems, and was a kind of bridge between the past of India and her present. “Netaji Subhash Chandra Bose said “Swamiji harmonized the East and the West, religion and science, past and present.” It is no surprise that he managed to inspire two differing political ideologues to speak in unison!

Born in Calcutta in 1863 as Narendranath Datta, his first spiritual encounter happened when he met Ramakrishna Paramahamsa in 1881. Although he did not initially accept Ramakrishna as his teacher and rebelled against his ideas, he was attracted by his personality and began frequently visiting him at Dakshineswar. After Ramakrishna’s death in 1884, he established the Baranagar Math and took the formal vow of sanyasi (monk) in 1887.

In 1890, he left his monastery to travel around the world as a Hindu sanyasi, wandering across India and abroad. Beginning with Varanasi (Benaras) his first destination, Vivekananda travelled extensively in India for five years, visiting centres of learning and acquainting himself with diverse religious traditions and social patterns. He developed deep sympathy for the suffering of the poor and resolved to uplift the nation. Living primarily on alms, Vivekananda travelled on foot and by train with tickets bought by admirers. His sole possessions were a water pot, a staff and his books.

In 1891, Swami Vivekananda travelled to Gujarat. While travelling through the desert of Kutch, he had an experience from which he drew an important lesson of life: “For days, I used to travel on foot through the desert. Once when I was very thirsty, I searched for water and found a lake shimmering at a distance. When I approached the lake, it vanished. Then I realised it is just a mirage I had read about. So is it with this universe. We are all travelling in this mirage of the world for years, without knowing that it is just a mirage!”

In December, 1892, Swami Vivekananda arrived in Kanyakumari in Tamil Nadu. He did not have any money to pay for a boat ride that would take him across to a rocky island. He plunged into the sea and swam across to get there. There he meditated for three days and had a vision. He wrote: “At Cape Camorin, sitting in Mother Kumari’s temple, sitting on the last bit of Indian rock—I hit upon a plan: We are so many sanyasis wandering about and teaching the people metaphysics—it is all madness. Did not our Gurudeva use to say, ‘An empty stomach is no good for religion?’

Travel around the world

Later, when he heard about the World Parliament of Religions being held in Chicago, Swami Vivekananda decided to go there to present his thoughts about Hinduism. Vivekananda started his journey on 31 May 1893 and visited several cities in Japan, China and Canada en route to the United States. The Parliament of the World’s Religions opened on 11 September 1893 at the Art Institute of Chicago. On the opening day, Vivekananda gave a brief speech that began with his famous words – “Sisters and brothers of America!”

To illustrate that all religions are equal in their efforts to reach God, Vivekananda quoted Hindu scriptures that said “As the different streams having their sources in different places all mingle their water in the sea, so, O Lord, the different paths which men take, through different tendencies, various though they appear, crooked or straight, all lead to Thee!” Despite the brevity of his speech, it voiced the spirit and sense of universality of the parliament.

Today, when we look back, it is clear that the philosophy of Swami Vivekananda is relevant during these turbulent times. Our nation is still searching for solutions to its problems that have plagued it since the times of Swami Vivekananda a century ago. The businessman he met on a ship was none other than Jamsetji Tata, who was so inspired by his words, that he decided to establish India’s first scientific research institute – Indian Institute of Science, Bangalore!

On his birthday, which is celebrated as the National Youth Day in India, we salute India’s first global citizen! Swami Vivekananda – a truly global Indian! 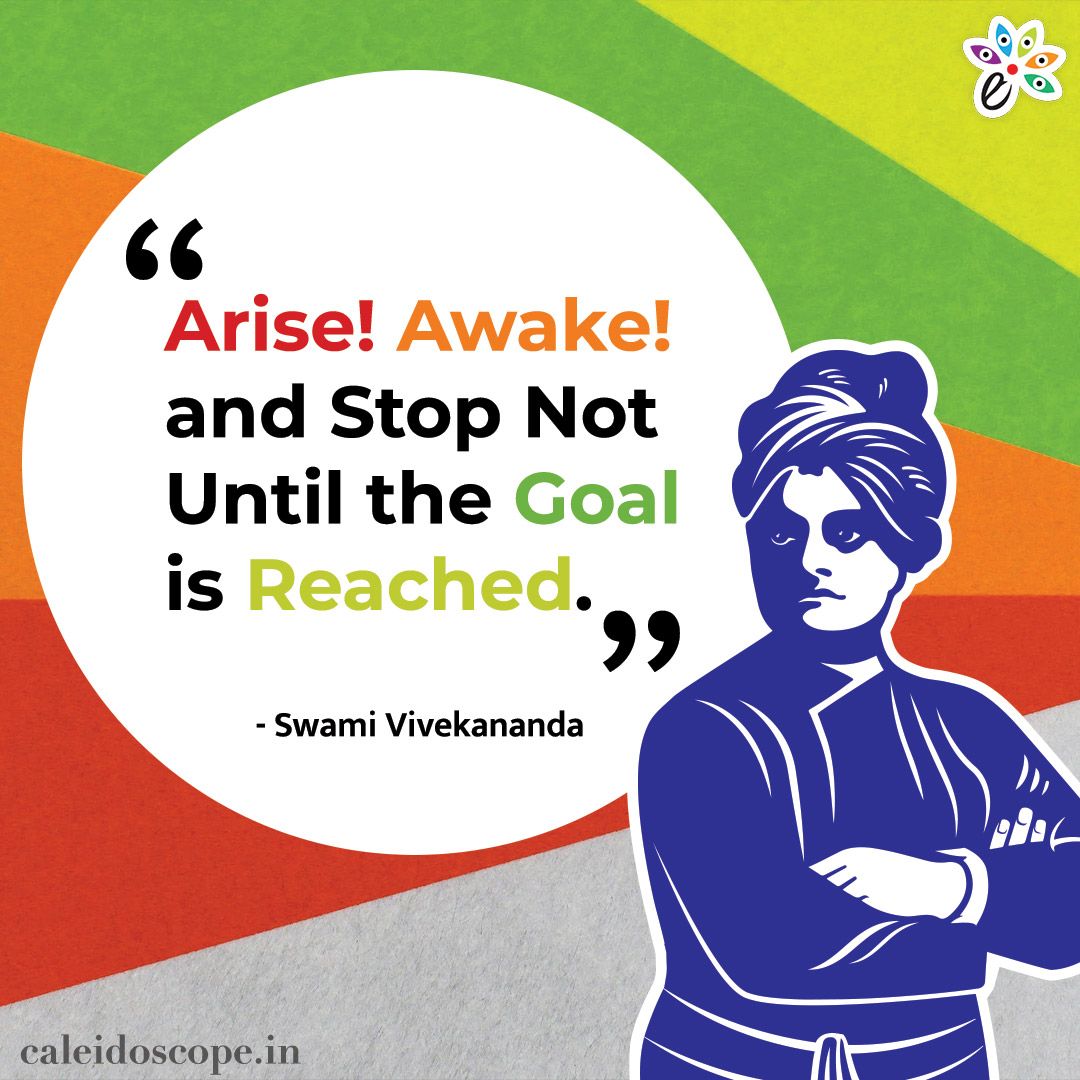 Arise, Awake, and Stop Not Till the Goal is Reached 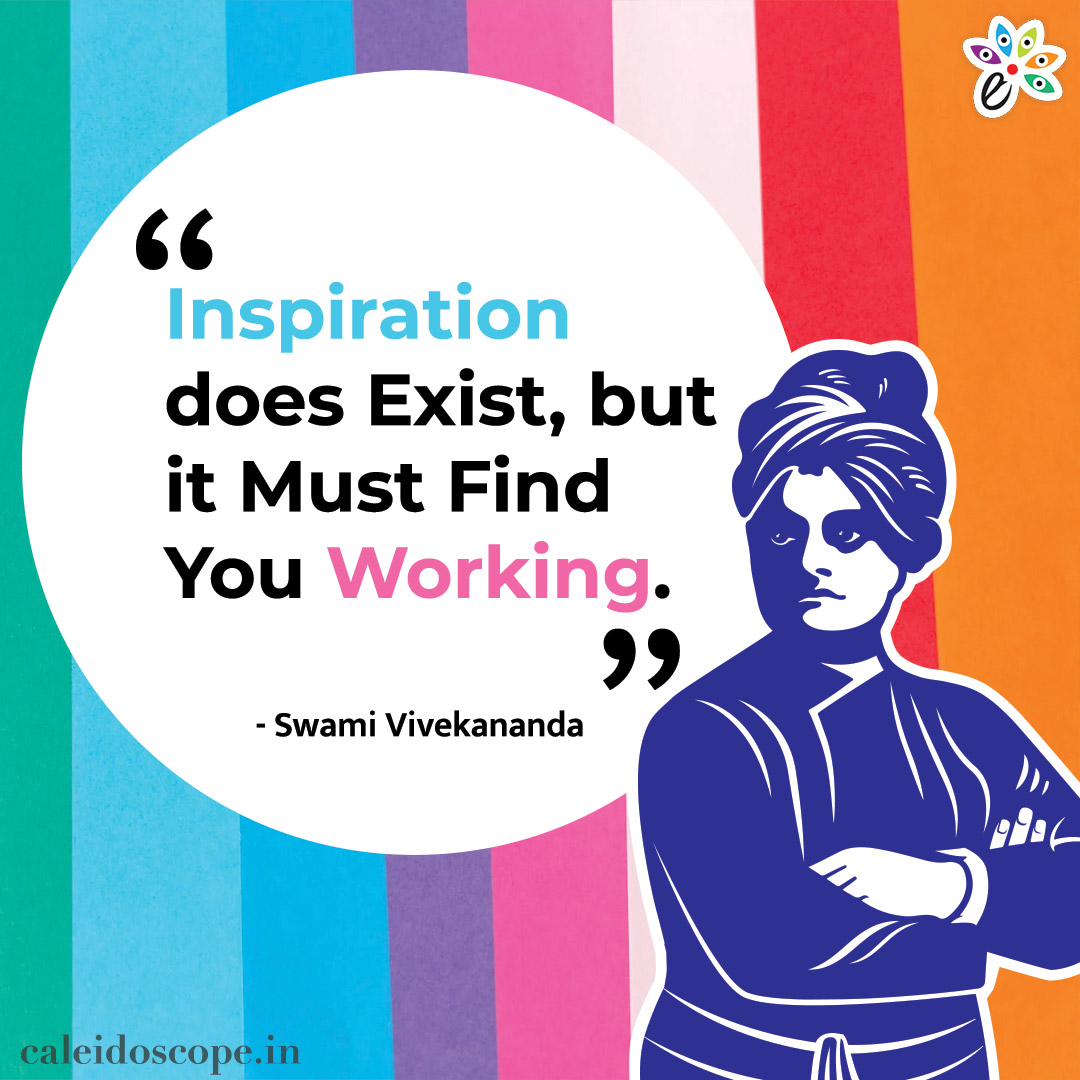 Inspiration does Exist, But it Must Find You Working. 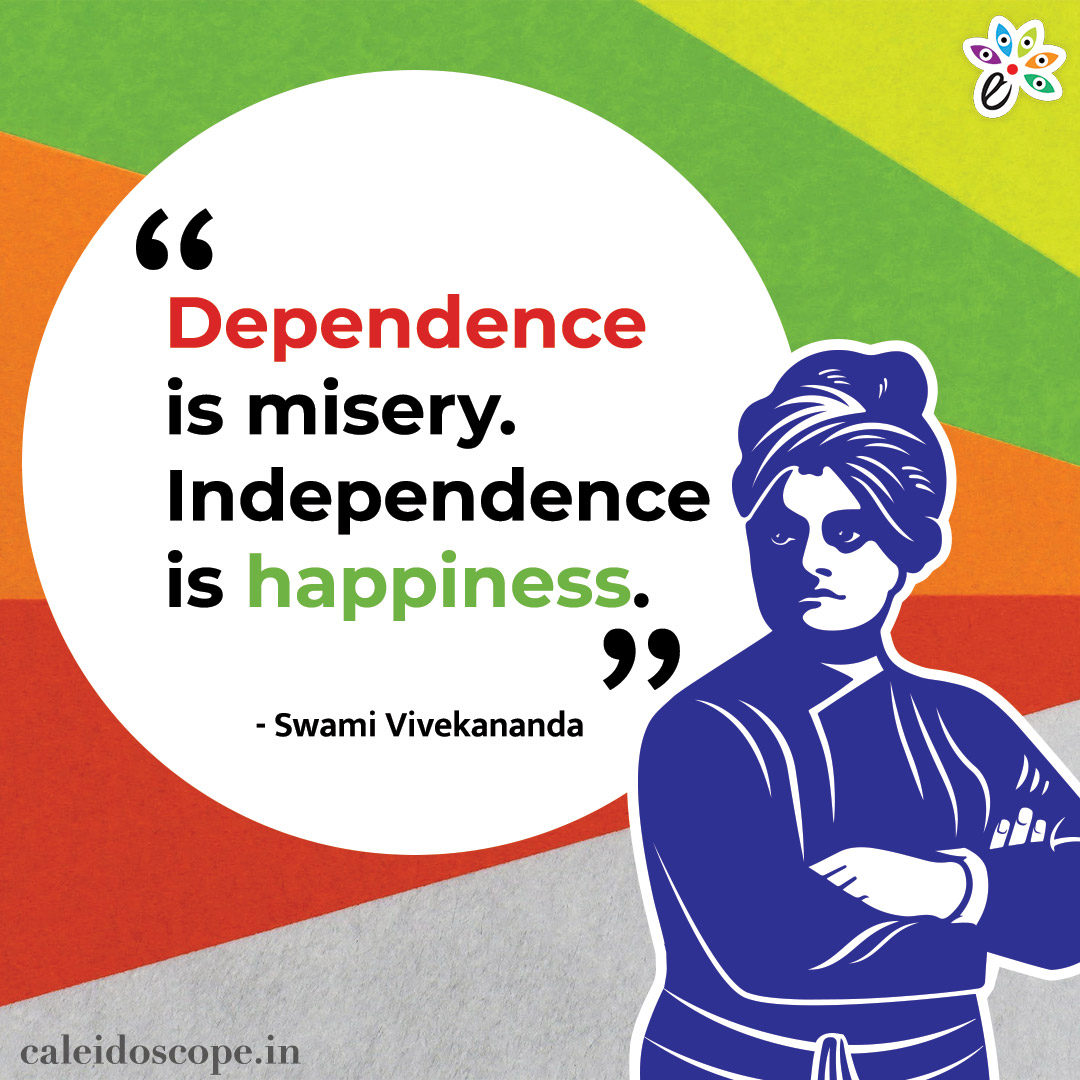 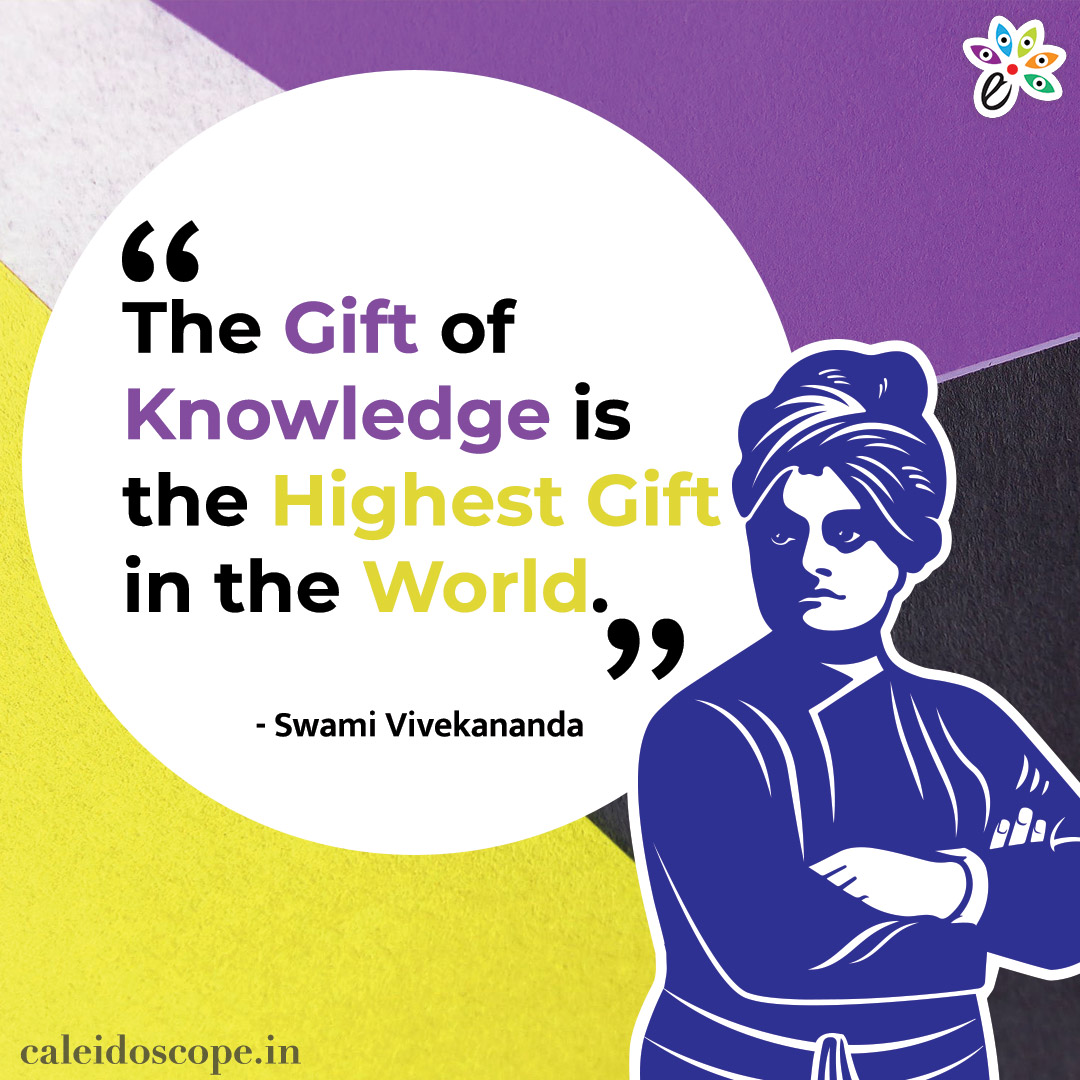 The Gift of Knowledge is the Highest Gift in the World. 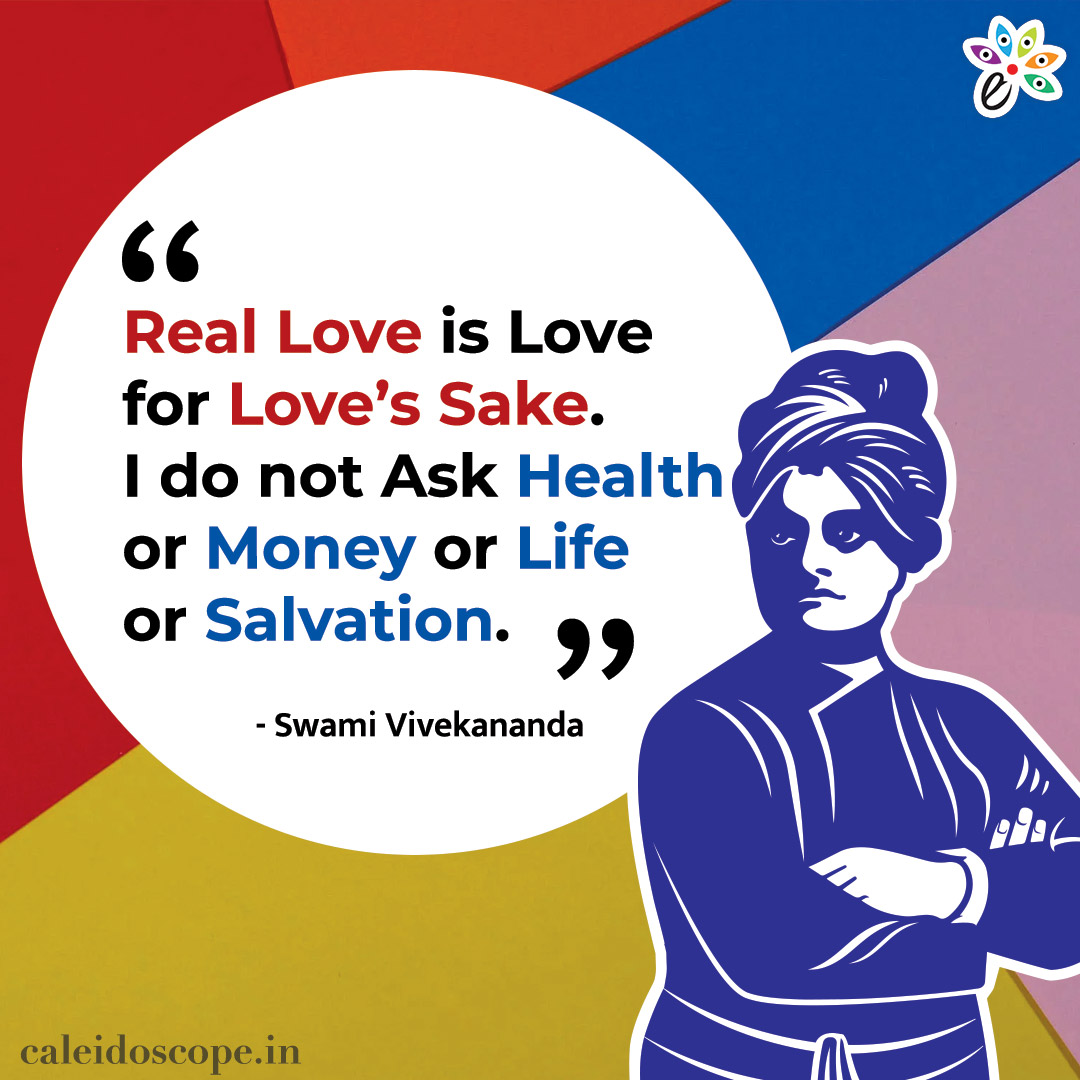 Real Love is Love for Love’s Sake. I do not Ask Health or Money or Life or Salvation. 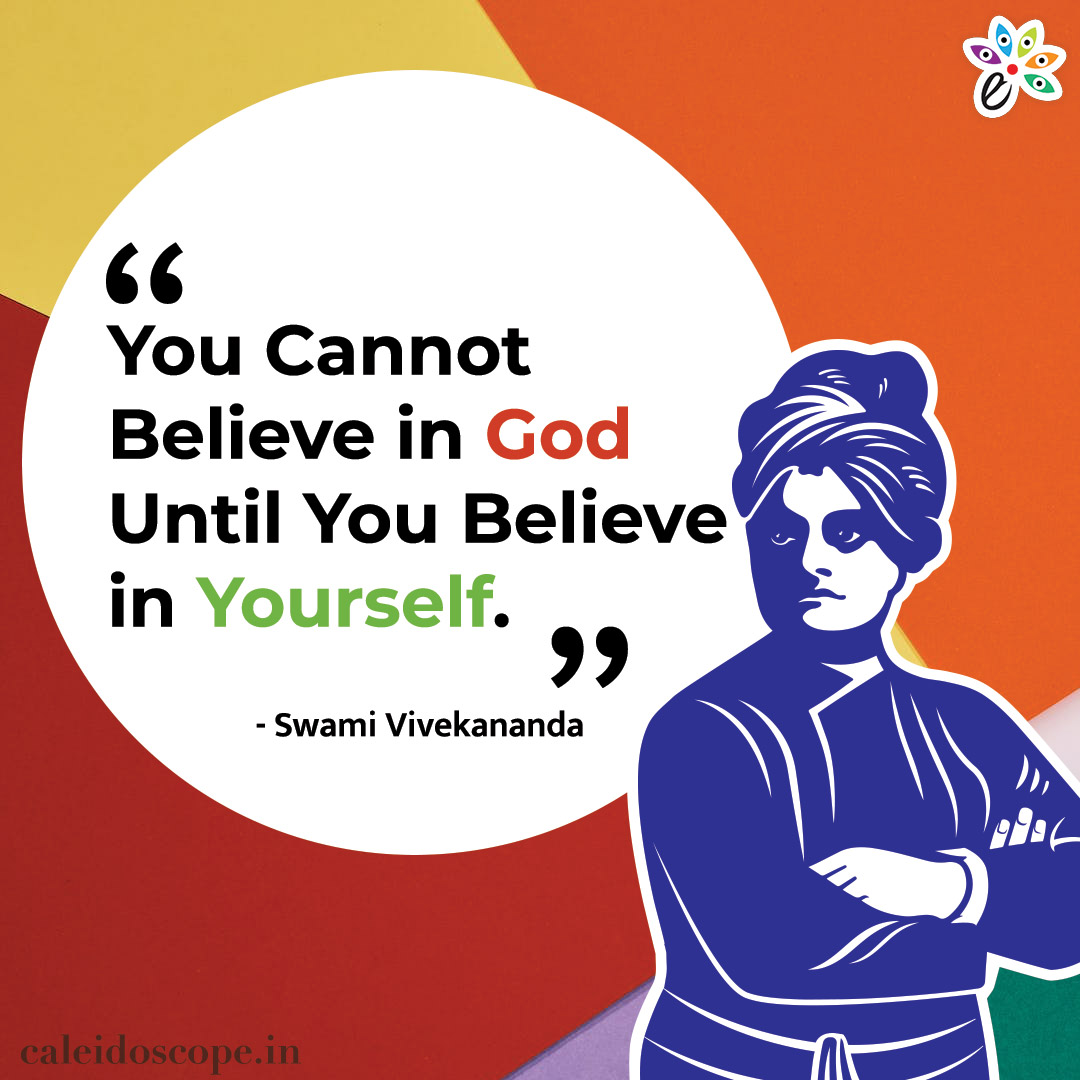 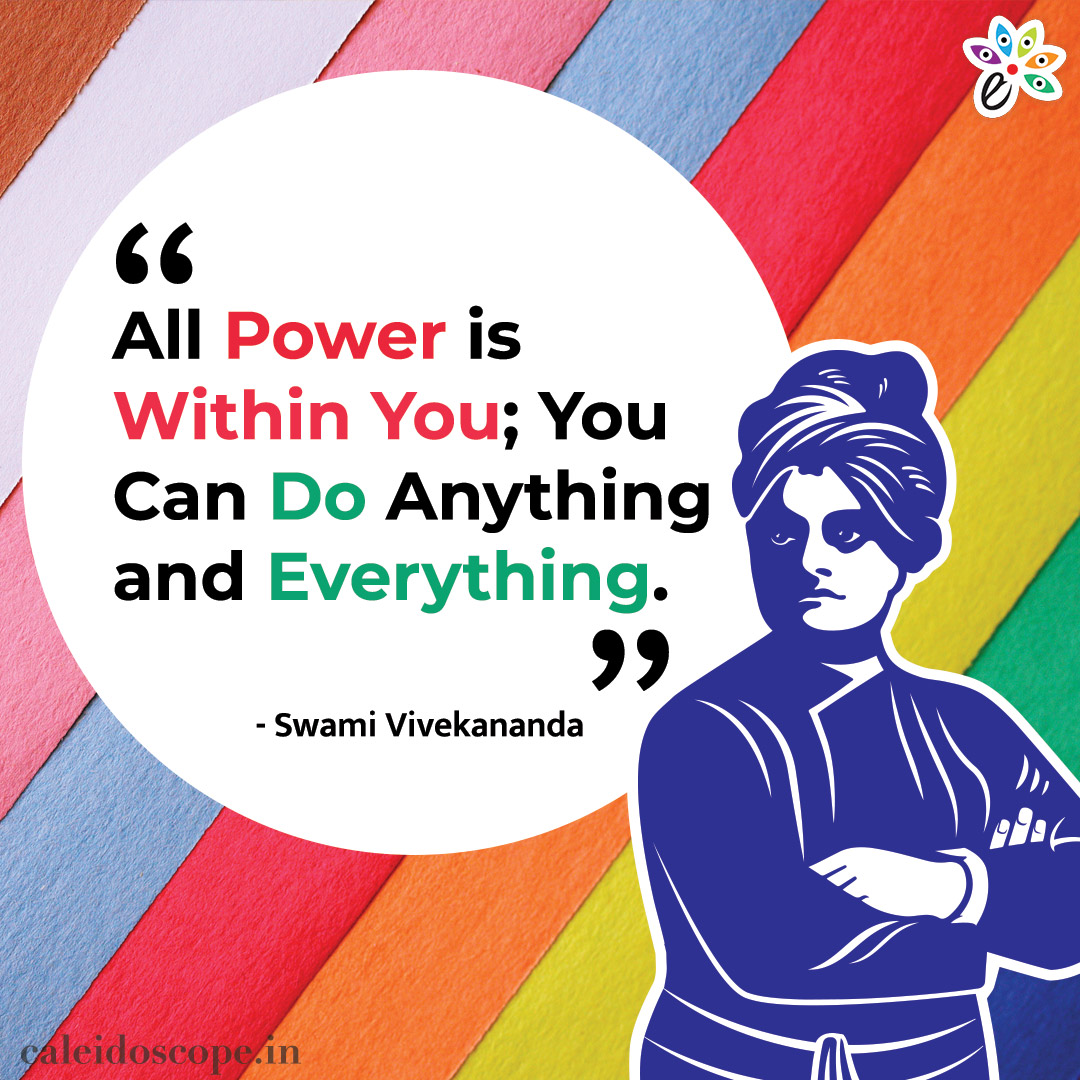 All Power is Within You; You Can Do Anything and Everything. 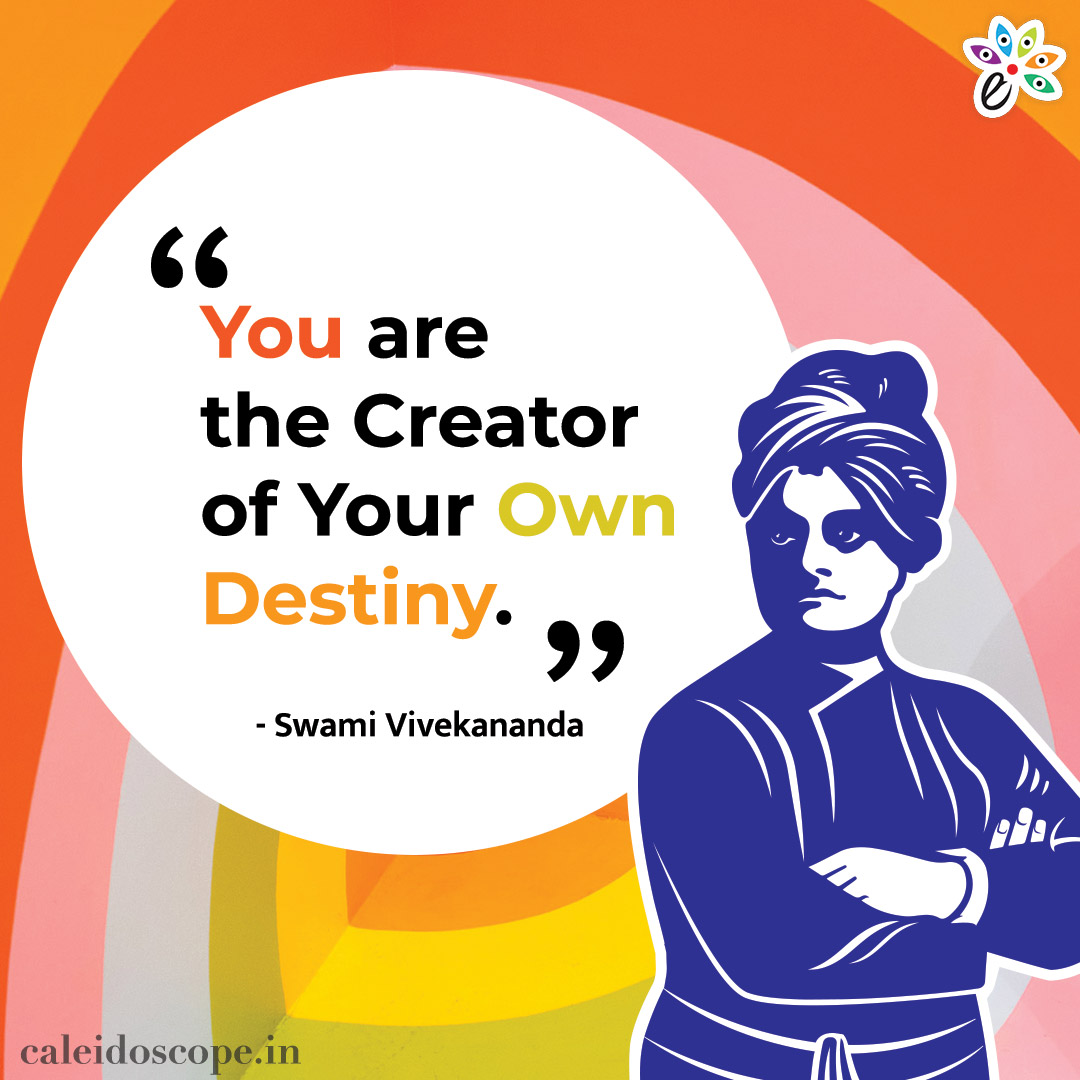 You are the Creator of Your Own Destiny. 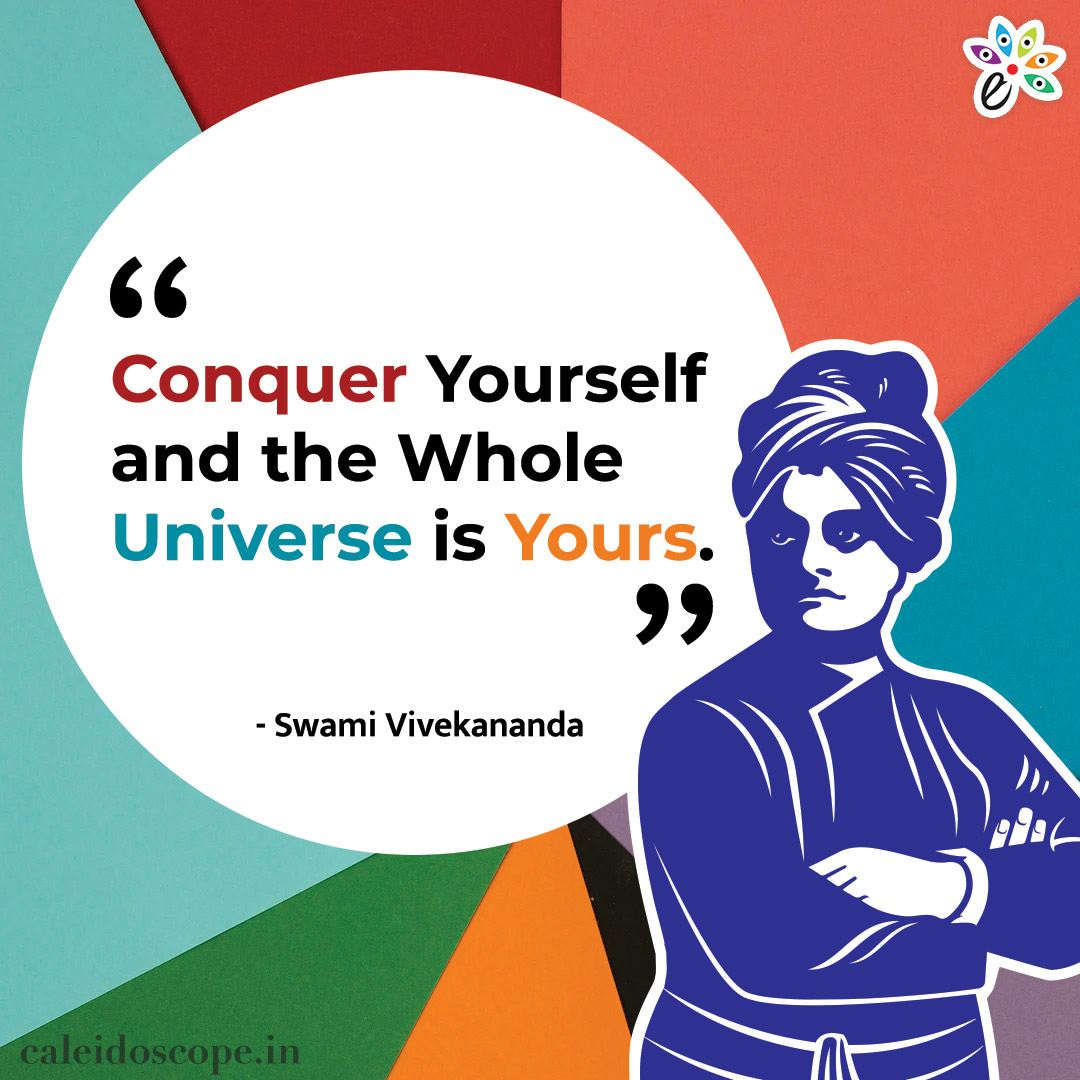 Conquer Yourself and the Whole Universe is Yours. 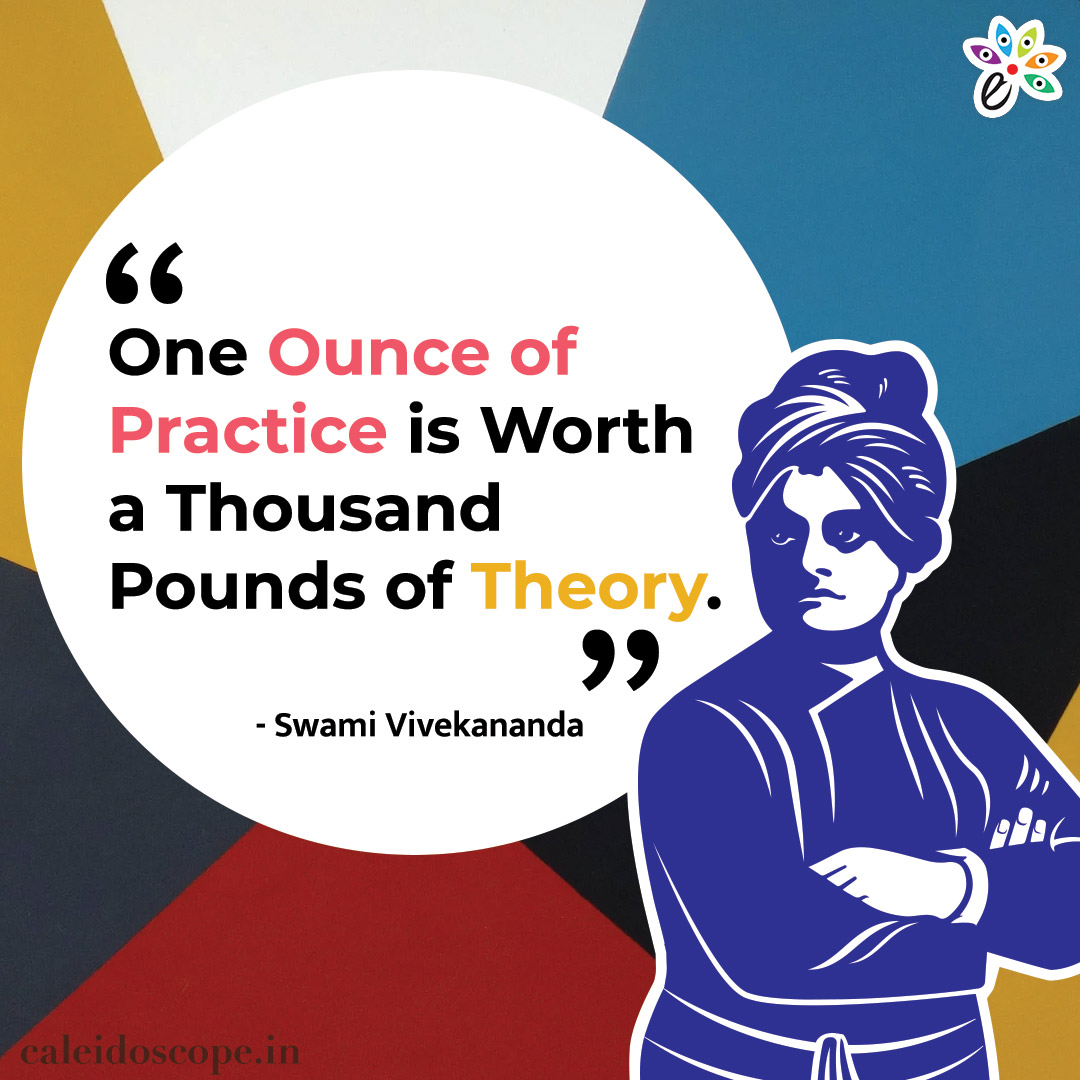 One Ounce of Practice is Worth a Thousand Pounds of Theory.