10 Things You will Witness at the Kerala Boat Race

I have heard my family talk about the traditional Kerala boat race ever since I was a child. With great excitement they discuss the race and watch the entire race on television. Post this there is an extensive review of the same and a long list of could-have-been scenarios. I had never shown much interest in the details or the event itself.

I never imagined that I would be fascinated by this grand spectacle, and obviously, I was wrong. My resistance shattered to miniscule bits when I saw the race for the first time.

I am now convinced that you can resist being excited by the snake boat race only until the day you really see it. Pandit Jawaharlal Nehru was fascinated by it when he first saw the race in 1952 and from that day the list of converts only seem to endlessly multiply. The Nehru boat race, Kerala’s amazing race, is the most colourful water sport in India.

This annual event held at Alleppey on the Punnamada lake takes place on the 2nd Saturday of every August. It attracts thousands of people from across the world and is the biggest competition in this part of the country. Tourists and locals equally bubbling with enthusiasm give this city its festive look. Men and women with obviously large cameras photograph everything from spices to tea shops as they prepare for the mega event. So what really do they come to see? Well, here is a glimpse of the extra ordinary.

10 things you will witness at the Kerala boat race, Alleppey

The back waters and the snake boats. And of course, the race. The snake boats, also called the ‘chundan vallams’ form a major part of the visual treat. They are impressive, have a mighty pointed prow, are 100 feet long and can accommodate the team of rowers of up to 110 members. By the way, the snake boat is considered to be “the longest water vessel used for sports purpose”.

3. A Sea of People with Multitude of Colours

A battle for the best seats in the gallery is an early indication that the race day is here. A sea of people and the multitude of colours flood every visual frame. A few prefer to come in as early as five hours before the race to reserve the spot with the best view. Among the many options available, include the view from the island or from boats floating on the lake. But the most interesting one – only meant for the brave ones – is the stand that is open to people without tickets. There will be plenty of locally brewed alcohol, singing and ardent show of affection for their favourite teams.

But what you must note is that, even here there are a committed few, who will just not compromise on the view!

4. People Fighting to Get the best Views

When there are what seems like a hundred boats and a million people in a single lake, it does get a little busy. A few clashes and a few accidents, you can expect.

And few of a different kind (induced by intoxicating liquors or the belief in one’s illusionary superpowers!)

The ambiance is created not just by the incredibly picturesque race, but also by the music, an essential part of the race. There is music and singing from the boats with enough backing vocals from the crowd. And along with this, is the hysterical cheering when the race is on. It’s a magical atmosphere!

But for some there isn’t a better place than this for drunken contemplation. Finding the inner peace amidst it all.

Trivia: Kerala tops in per capita consumption of alcohol in India. The common belief is that the most amount of planning among the men here happen not before the new financial year but on the day before a dry day.

6. Where’s the fun if the Maharaja does not come to visit his subjects?

7. Women in crisp, neat traditional uniforms, ready to conquer the waterway. The teams are strong and much tougher than they look

8. A few fancy speedboats. Well, why not?

9. As you would have guessed, an overflow of emotions. On the boats, off the boats and sometimes in water. 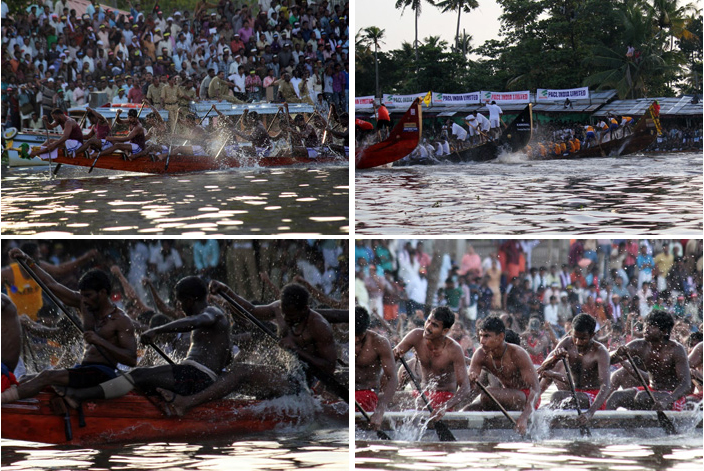 And of course the winners. Winning here is not the important thing, it’s the only thing. They have trained for months to make this happen. The teams have had diet restrictions, have had to stay away from their families and work really hard in the hope that they would win the trophy. A silver rolling trophy, a replica of the snake boat, was gifted by Jawaharlal Nehru after he witnessed this amazing race. The team that wins the trophy become the local heroes until the next August when the battle resumes for that coveted place of honour.This has been an incredible experience for me. One that I can try to explain but what I have managed to write does not do justice to the life or the vibrancy seen at the race.