Book Review – ‘Vignettes Relating to Kathakali and Shakespeare: The Thirasheela Versus the Curtain’ 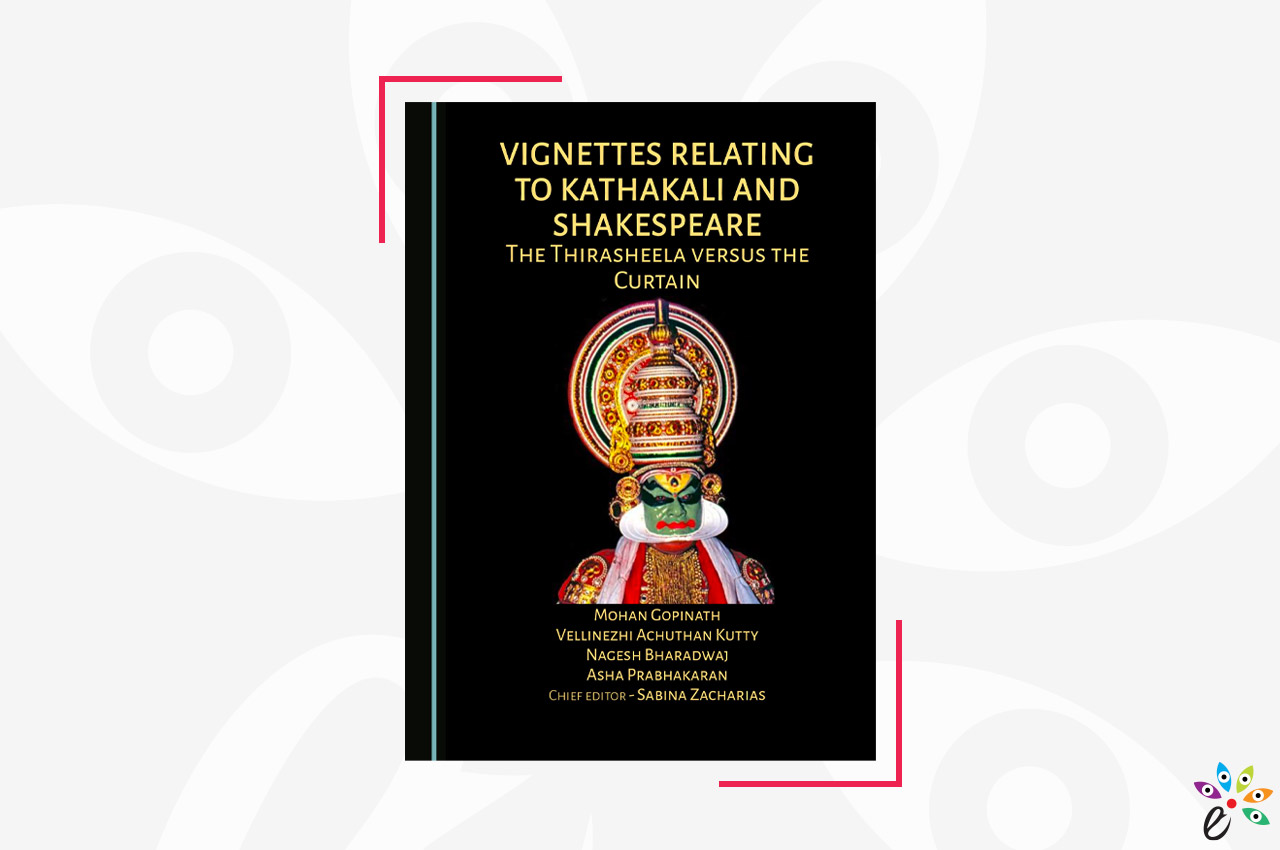 I am very happy to review this book which is a unique blend of Kathakali and Shakespeare.

The book starts with the origins (this is a brief section as the purpose of the book is not to give a history of the dance form) and then moves on to analyse the importance of the training imparted to the actors, singers, and percussionists. It indicates how the people trained in the various disciplines (especially the actors) have to build on the basics given to them during the eight years plus of extremely physically and mentally tough training and bring in their own interpretations to flesh out the characters.  This is backed up with examples on how this is done by different actors. The book moves on to compare the acting of two great actors in Kathakali and Shakespearean drama, and how they interpreted characters – that is, the similarities. These are Kalamandalam Krishnan Nair and Sir Laurence Olivier. The authors chose these because they are for them the avatars in their chosen professions. They have gone into detail about how these two actors conceptualized characters – Sir Laurence as Shylock and Krishnan Nair as Nalan are just two examples.

The book also looks at the difficulties a Kathakali actor has to undergo in depicting complex and nuanced characters and interpreting them in a sophisticated manner exactly as a Shakespearean actor has to do. The way actors ‘get into character’ in the two genres is also explored, along with similarities in the characters such as King Lear and Dakshan (both unfortunately linked by filial devotion). Another pair is Hamlet and Nalan – bound by mind forged manacles or self-imposed restraints. The book also goes into detail on the fusion experiments being made between Shakespearean plays and Kathakali and shows that these are not in line with the traditions of either genre.

The authors cover the new experiments – for example in Kathakali singing – which they say are sometimes also not in line with the classicism of the dance drama and conclude by looking at the way forward. The USP of the book is the comparisons with Elizabethan drama and identifying the ideal type of theatre (perhaps akin to the Globe Theatre) in which Kathakali should be performed. The importance of the singing and the rhythm in Kathakali are also a part of the book.

By the term ‘performing arts,’ the authors mean any form of dance drama or theater and so the readership of the book will be wide as it will also be of interest to actors and the general readers in the west and the east.  It has specifically addressed the fusion of Opera and Shakespeare and the experiments now being done through the medium of Kathakali of converting Shakespeare plays into the former genre.  Both these aspects will be of interest to the reader in the west who will be able to approach Kathakali through more familiar routes; Shakespeare is after all meant for all times. So, the book will be an engaging read for all aficionados of Shakespeare and Kathakali.

There are people who are fond of Kathakali (in India and outside) but find it difficult to understand or come across a book which will cater to their expectations. This book will therefore be of interest to all people keen on developing their understanding of the performing arts, and secondly to the person who is being trained to come into the field of Kathakali as a professional, and thirdly anyone who is a keen follower of the dance drama and the performing arts.

The book, in short, is the only one existing to address both Kathakali and Shakespeare simultaneously and bring out comparable points of reference. The western reader interested in Shakespeare will gain a new perspective on the playwright by seeing his work set against a classical Indian dance form, while those interested in Kathakali will gain a new perspective on the actors’ portrayal of the character by seeing how Shakespearean actors set about the same task.

I would like to see another publication which again picks up on the complex but fascinating theme of this book which is a love song for Shakespeare and Kathakali.

Dr. Mohan Gopinath holds a Master’s degree in English from St. Stephen’s College, Delhi University and has worked as a banker with HSBC, consultant, researcher and teacher. He takes a keen interest in the performing arts. He has written and published papers and case studies across a range of subjects such as leadership, management of change, conflict resolution, banking, protection of the environment and the performing arts. His published books include Business Drama: How Shakespearean Insights Help Leaders Manage Volatile Contexts and The Actor Who Could Connect: the Genius of Kalamandalam Krishnan Nair. He is also a keen tennis enthusiast.