Can you handle the Nafrat… Taksha, a Hindi Rock Band 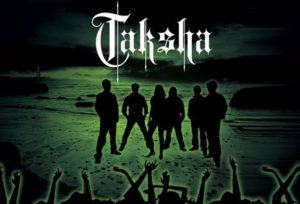 Nafrat… angst… can it be better expressed than through the raw power of rock music… Rock music has an ability to capture the underlying anxiety and anguish within a person. “Khatron mein jeena hain, har lamha sehna hai, ruk nahi jaana hai, rehna hai tujhko bekhauf!” The lyrics and the music from “Bekhauf”, one of the songs in the album ‘Nafrat’, create a blend of melody and aggression leaving you deeply moved by its uniqueness.

Rock music and Hindi… yes, Hyderabad is the city of origin for ‘Taksha’, a unique Hindi power rock band that emerges from a group of seasoned musicians. Their music makes you wonder whether, angst and aggression can be better portrayed in a four minute song. “We believe that a language barrier prevents a wider audience from enjoying rock music”, says Shadrach Prabhu, the lead guitarist. The name of the band also has a story behind it, “The name was a simple choice”, says Anjani, another member, “we wanted to bring out the Hindi quotient that is imbibed in our lyrics and our music; so, naming it after the oldest university in India made complete sense.” The band has a female vocalist, another unique feature in Indian rock music scene.

The six piece Hindi rock band came together in August 2009 and it debuted live just in two months with an original set. The members bring in nearly 10 years of experience in rock music with Shadrach, Maruth and Anjani being were a part of ‘Sledge’, another leading rock band from the city. They work in a regular 9-to-5 job but still make it a point to work on their music with passion. Shadrach, the lead guitarist, was awarded the Best Guitarist at the Castrol Garage Rock National, 2003 for his out of the world speed on the guitar. He is a trained western classical guitarist and has been teaching music as well. Maruth, the rhythm guitarist, has compiled background scores for movies like, Annukojunda oka roju (Telugu) and Angrez. Anjani on the bass runs ‘fullvolumerecords.com’ which takes care of the band’s music. Suman on the drums is a sales manager in an insurance firm. Kiran on the keyboard is an engineer. Shweta, the vocalist is a pass out from Hindu College, Delhi and was selected after rigorous rounds of auditions. 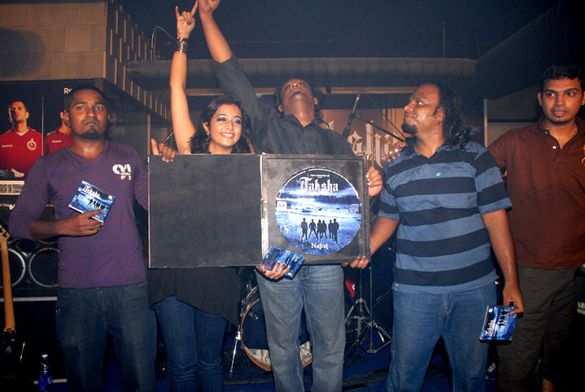 The band has recently launched its debut album, ‘Nafrat’ along with the video release of ‘Bekhauf’, one of the songs. The music brings along with it a unique sense of originality and holds various influences from Western Classical, Progressive Rock, and Symphonic rock. The band did not believe in bringing in influence from Indian folk or classical notes as they wanted to keep the ‘rock’ alive in their music.

Talking about the special feel in the songs, Shadrach says, “The lyrics were contributed by friends after we briefed them about the essence of our music. You would come across numerous oxymoronic emotions in our songs. Nafrat itself has a different edge to it; the main emotion is that of hatred out of love.” The album also contains songs which bring out the feeling of anger, depression, loneliness, intensity, love-hate and also god. The instrumental of ‘Talaash’ is extremely fascinating and so is the song,

Usually, in a rock performance, the audience loves it when cover versions are sung because they can take pleasure of singing along. But Taksha makes it a point to perform only original compositions and it still has been successful in drawing a great response. The band has just returned from a successful tour from Bangalore. “The most important thing to keep the magic going amongst the audience is performing live regularly”, says Anjani with 10 years of experience performing live. Unfortunately, he says there is not much of a music festival culture in India, although rock is mainly promoted through big college events like Strawberry Fields in NLS, Bangalore or Deepwoods Fest of Madras Christian College. These fests provide the much needed platform for upcoming bands to present their talents.

Discussing about music as a fulltime career, Anjani says, “Rock as a genre has not been a part of mainstream music for a long time, although with movies like ‘Rock On’, rock is gradually entering and making it big in the mainstream. We have been playing music for 10 years now, and I can’t recollect a better time for our kind of music than now in the country”. Talented musicians today are finding their way to the top without being patronized. Although, sales through cassettes and CDs is disappearing overtaken by new media like the internet and mobile ringtones, and the members of the band feel that this is going to take them higher for sure. The band is presently in the process of composing their second album and promises its release at the earliest. My advice is, watch out for Taksha, the next big thing from our city of Hyderabad.