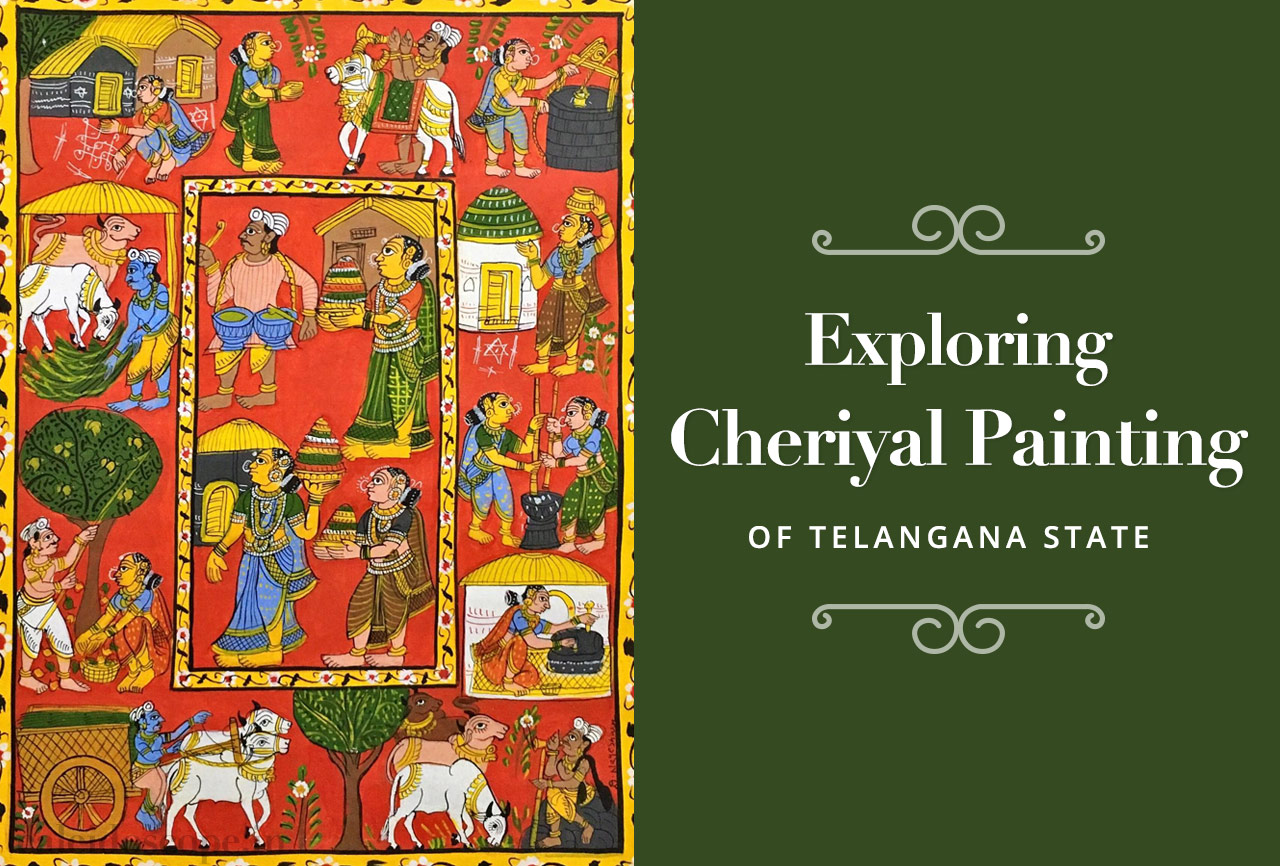 #Didyouknow that around 100 kilometres from Hyderabad in Warangal district of Telangana State in India is a village called Cherial with an amazing art form which is 400 years old? Why is it special? Let us find out. The folk art form of Telangana has scroll paintings, masks and even toys which are well known and well liked. It is an art which is still alive and available to us through efforts by artists who are painting and also by holding workshops and exhibitions by these practitioners. The art and its related items are sold online and at emporia as well.

A Peep into the History of Cheriyal Painting

The art we are discussing started 400 years ago. A scroll from circa 1625 is in the collection of a museum at Hyderabad, Jagdish Mittal and Kamal Mittal Museum of Indian Art. It depicts the legend of Markandeya and Bhavana Rishi.

The scroll format depicts heroes and their exploits, of a particular community or Hindu mythological stories. A stylised version of Nakashi art, it was given this term when Telangana was under the Golconda sultans. However, the art resembles Nayaka art from Vijayanagara with strong local Telangana motifs. This art was popular in Andhra and Telangana regions though it is now centred at Cherial. Historically speaking, in India we have the Phad scroll painting of Rajasthan, Paithan/Pinguli paintings of Maharashtra, Prasastipatra of Gujarat, Odisha and Bengal have the pattachitra. Though the rulers of the area were Muslim, Hindus were a big part of the population and merchants, landlords and the local temples followed their own culture and patronised the art form.

The scroll paintings were used by balladeers called patamavaru, who performed at villages with a group and narrated the story depicted in oanels to educate the people, depicted along with accompanying musical instruments. Each panel of the scroll would depict an episode. The Bhagavata purana, Krishna leela, Mahabharata, Ramayana, Shiva purana, Marandeya purana have been popular themes of the scrolls. Also, local puranas like Daksha Yagya and Madel purana made for the ‘dhobi’ caste, Jambavanta purana for the ‘madiga’ caste and Goud purana for the ‘goud’ caste of Telangana.

While narration, other than the scroll, props like masks, dolls, leather and wooden puppets, were also used. The scrolls were large, 30 to 45 feet in length and 30 to 45 inches in width.

The painting was made on khadi cotton treated with a mixture of starch from rice and a variety of white mud, tamarind paste made from boiled seeds and gum water. This process was followed up to 1850. On this surface the artist made the sketch with a brush or pen made of squirrel hair.

The colours were derived from natural sources. After 1850 mill made cloth started being used and colours were imported from Europe was used. The masks are made from wood, sawdust and tamarind paste. The background is dominated by red and the painting is made using lively colouring. The scrolls used to be consecrated as well, with a sacred ceremony. The balladeer would pay the artist and the scroll would be kept in a temple for 3 nights and then a feast would follow with the sacrifice of a goat. When a scroll got old, the artist would repaint it or it would be fed to the water with a ceremony.

The Cheriyal artists and their art

The format of a scroll was vertical with 20 to 30 panels; the legend starting at the top. Sri Jagdish Mittal, art historian opines that from the 17th to the 19th century, there were eight to ten families of artists from Telangana. About 70 years ago there were few remaining artists who lived around temples of the region. Since 1942 only one family of the descendants of Nakashi Dhanalakota Venkatramaiah has been living in Cherial in the district of Warangal. This is how the name ‘Cherial painting’ came about. He was a great painter of the 20th century. Artists from Karimnagar, Daklu and Appaiah from Hanamakonda were also experts in the field.

There are very few extant examples from the 16th to 19th centuries. The art however continues to this day in different forms. Given that the style of painting shows Nayaka dynasty art’s influence. It can be inferred that the artists may have migrated from Vijayanagara to the prinicipalities of Gadwal and Wanaparthy, spread to North Deccan and also the court of the Qutub Shahis. After 1775, the influence of their patrons from the North Deccan took place, also the scrolls became larger. Further changes happened in style from the 1840s.

Over the last 80 years the balladeers and performers got eliminated and the art got side-lined due to the advent of cinema and television.

Where is the art today? As mentioned, artist D. Venkatramaiah’s descendants live in Cherial, his son late D. Chandraiah, his son D. Nageshswar, and younger brother of D. Chandraiah, D. Vaikuntam have kept the art alive. Son of D. Nageshwar, D. Saikiran Varma works from Hyderabad. His mother Smt. Padma and brother Sravan Kumar are also artists. They are painting vivid artworks to suit both home and office environs, making masks, dolls and innovating to incorporate the art to make keychains, painting on apparel, painting on mobile covers, decorative plaques, and other everyday objects. They hold exhibitions and workshops of the art form regularly (including online classes) to teach art enthusiasts who wish to learn this style of painting. The Secunderabad railway station in Telangana, displays Cherial scrolls of local traditions such as marriage ceremonies and pottery making.

Another artist late Merugoju Chandraiah learnt the art from D. Vaikuntam. His brother Merugolu Madhu works from Lalapet, Secunderabad and has a YouTube video on the painting form, for the interested person. He conducts workshops as well.

Showcased here are few artworks from the studio of artist D. Saikiran Varma which depict scenes from rural life in Telangana, masks, dolls, decorative and utility items as well. The paintings and masks can liven the décor of any home with its sheer colourful energy!

Cheriyal painting has evolved with the times. Initially it focused more on telling a mythological story through a large colourful scroll with the panels depicting episodes but today the art focuses more on village scenes and general themes of life. Also, the deities like Krishna and Ganesha are not forgotten and are painted in the Cherial style. More power to this wonderful art form!

Suggested Read: Types of Indian Paintings That Flourished Through the Ages