Crossover Movies – Have they clicked in India?

Immigrants and their ways of living have often captured the attention of the Indian film industry. ‘Cultural Crossover’ movies, just like the name suggests seek to explore the different value systems and beliefs that emerge when a person or a community crosses cultural boundaries. Indian Diaspora has been in existence for ages now but crossover movies have gained popularity only recently due to the impact of globalization in India and the realization that we do have an audience to appreciate such films!

The typical experiences of nostalgia and of being awkward in a new space create hilarious situations and make for excellent entertainment. Crossover genre movies not only give an authentic portrayal of the ways of living in a cross-cultural set up, but also in their own way plead for an open and more liberal society.
Indian filmmakers in the 21st century have ventured into new frontiers and sought newer challenges, which have resulted in many Crossover films. I have attempted to analyze a few well known Cultural Crossover Indian films and their attempt to explore the “unity in diversity” element that all Indians share along with the alienation that they face in their new cultural set up. 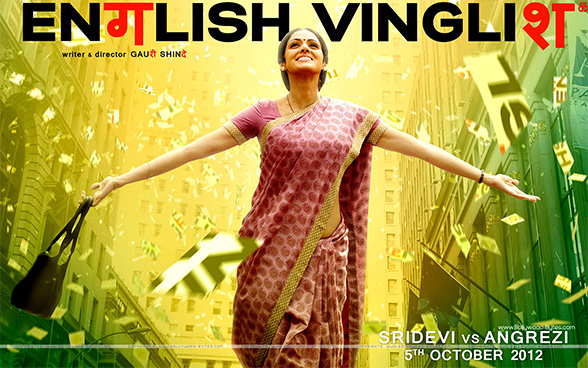 The latest movie that comes under the Crossover category is ‘English Vinglish’, which is directed by Gauri Shinde. Promoted as Sridevi’s comeback movie, it has been appreciated for its freshness in handling a seemingly simple yet complex issue of acceptance. Set in an upper middle class household, Sridevi plays a typical housewife cum mother who is perfect in every sense, and yet feels unaccepted and inferior due to her lack of English skills.
By exploring the insecurity of a woman who develops courage finally to come out of her comfort zone and learn English all on her own, it shows how in India itself, identity and respect still depend on the universal language of our erstwhile rulers. The movie also depicts the universal nature of the issue as the protagonist’s English class is an amalgamation of various nations/races. Hilarious and yet very simple, this movie touched my heart and in a way depicted yet another context in which we find Indian society today.

The most prominent movie that comes to my mind as a crossover film is Mira Nair’s “The Namesake”. Based on the book by Indian American author Jhumpa Lahiri, who herself been recognized as someone who explores her own experiences as an Indian immigrant in US, the movie vividly depicts the feelings of rootlessness, the disconnect with one’s culture and the strive to change oneself as per cultural expectations.
At a deeper level, this movie explores familial expectations and the subtle ways in which relationships between parents and children change over the generations. The protagonist ‘Nikhil Gogol Ganguli’ is named after a renowned author, but he changes his name in the movie as its uniqueness becomes an embarrassment to him. He feels his new name fits in better with his circle and is able to handle conflicts of assimilation in his mind. However, some incidents force him to think over his name. Tabu and Irfan Khan were phenomenal as the lead characters and the film did fairly well at the box-office. 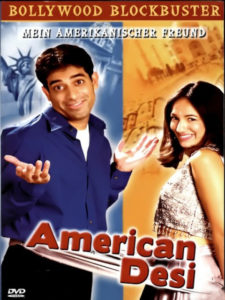 A classic in the crossover genre, American Desi identifies the pain of the confused and uncomfortable Indian boy who wants to adopt American ways. He wants to be something that he obviously is not. The movie is a light romantic comedy and in the process of exploring the romance, the hero realizes the worth of his heritage and finally comes to value and love it.
Directed by Piyush Dinker Pandya, the name of the movie belies the light romance that it depicts throughout. However, at its core it does touch areas that would affect any young confused second generation Indian in America who wants to “fit in” within a culture by shunning his Indian background and prove himself as good enough for his lady love.

Hyderabad Blues is a comic depiction of a US-returned software professional to his hometown. Varun, the lead character played by Nagesh Kukunoor, the director himself, returns to his country after a good 12 years. Everyone in the neighborhood is curious to know about him and all the aunties want to pair him with their daughters. However, the protagonist is irritated with all the attention coming his way and is immersed in wooing a girl who doesn’t seem to notice him much.
Varun, our hero, is unable to come to terms with the Indian concept of an arranged marriage and is piqued that at every stage of his romance, there is curiosity expressed by others and no privacy to explore the relationship. This movie is essentially the story of the classic Indian software professionals who through the 1990s ventured out of the country and experienced new ways of life. The film was well received by the audience and was featured in many film festivals.