7 years back, our office was giving out books from its library. I randomly picked up a few books out of which was NINE LIVES by William Dalrymple.⁣ ⁣I was unaware of this author and this book looked a little intense for me to finish reading it quickly. I still picked it up and took it home.⁣ ⁣
4-5 years later, I found this book while cleaning my cupboard and I started reading it MAYBE because I became a little mature now (lol, I guess) I enjoy these genres now.⁣ The cover itself was very intriguing because it has a red painted male (I suppose) face only till his eyes, silver and red headdress, jet black kohl around his intense fiery eyes, a design above his eyebrows and on forehead of a turmeric paste and the remaining face is smeared with an orange turmeric paste. ⁣
⁣
Growing up in India, you get a hunch of a state/culture just by looking at a picture. I had a vague hunch of this image to do something with Kerala despite knowing of only Kathakali and relating it to Kerala!⁣ My curiosity further increased in knowing more art forms from Kerala since I knew of only one. I opened the book’s second chapter to know more about this but couldn’t understand much.
A few months back I saw a similar image on Instagram and checked out more posts on this art form. I Googled this art and learned a lot of things about Theyyam and just could not wait to experience this in person!
February 2019

We were near a shrine around 1 pm in Kanahangad, a district in Kannur, Kerala, India. It was the month of February and yet, 30°C. There were some trees here and there to take shelter from the scorching sun. The entire village had gathered to witness Theyaam, a thousand-year-old ritual since the folklore has it that these Human Gods solve all the problems who pray to them.

There was a secluded palm-thatched hut where these dancers were applying makeup. I entered this hut to see a boy applying make up on the dancer’s face which was smeared in orange turmeric. The dancer was wearing a white lungi while his hands and torso were bare. The boy, with the help of a stick and black paint, was drawing loops and spirals on his face.

The palm-thatched hut had a lot of flowers, fruits, camphor, diyas, leaves and mattresses lying around. The dancers, after applying make-up, get ready for the performance. He had two feet mirrored headgear, metal cups on his breasts, fake long metal teeth protruding from both the sides of his lips, orange lips and intense kohl surrounding his eyes!

Some of them start by sinking into a crouching position, their head and body quivering, his hands shaking, his eyes flickering from side to side. Drummers insistently beat the goat hide cenda drums with their hands or wooden drumsticks. As the drummers increase the tempo, the dancers start to dance frantically till the time they are possessed by the Gods. 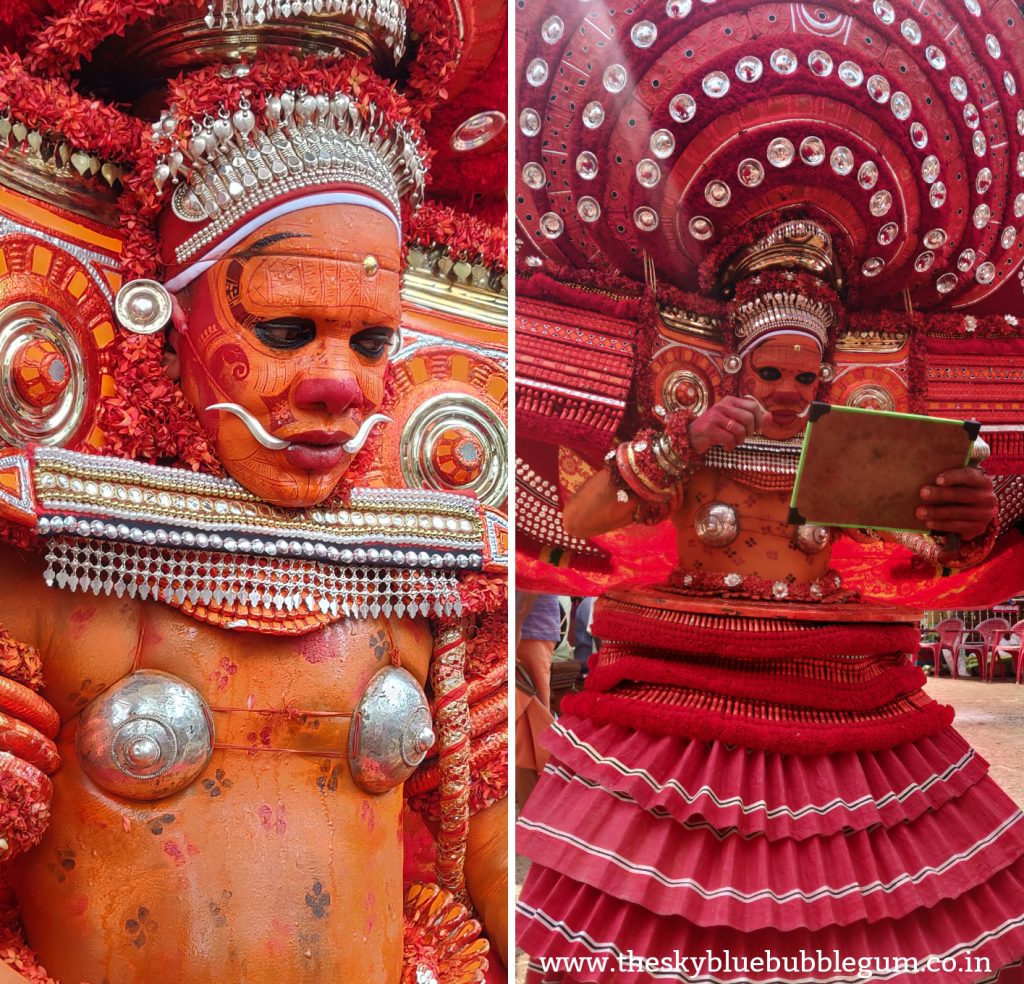 Upon asking these Human Gods about their experiences of Theyyam, this is what they had to tell us.

“How do you feel?” It is difficult to describe. I used to get scared earlier. Fear of me not summoning God correctly, properly. It is the intensity of your devotion that determines your intensity of possession.

“Are you aware of what’s happening?” No. The light stays with you the entire time. Voice changes. You become the deity. You are in a trance – the feeling of being divine doesn’t end only when the headgear is removed.

“What do you feel after coming back from the trance?” It is like a feeling. You do not remember anything. What happens during the performance, is not in your hands. It is just a feeling of offloading something.