Kerala is a land of exhilarating and breathtaking beauty. Composed of paddy fields and lined by coconut trees, with a gentle touch of the forests, it is no wonder that Kerala is recognized as”God’s Own Country.” Set in the southernmost part of India, Kerala is a state where the laws of unity, tranquility, and harmony reign supreme. As a state which reserves high esteem for its rituals and traditions, Kerala has succeeded in preserving its Artforms through centuries. Thus today, Kerala hosts several unique Artforms, which have all passed the test of time and still find audiences among the young and the old alike. From the vibrant Kathakali, which speaks through subtle expressions to the Ottamthullal, which provides social commentary through its lyrical narration, Kerala is home to some of the exuberant artforms of the world. 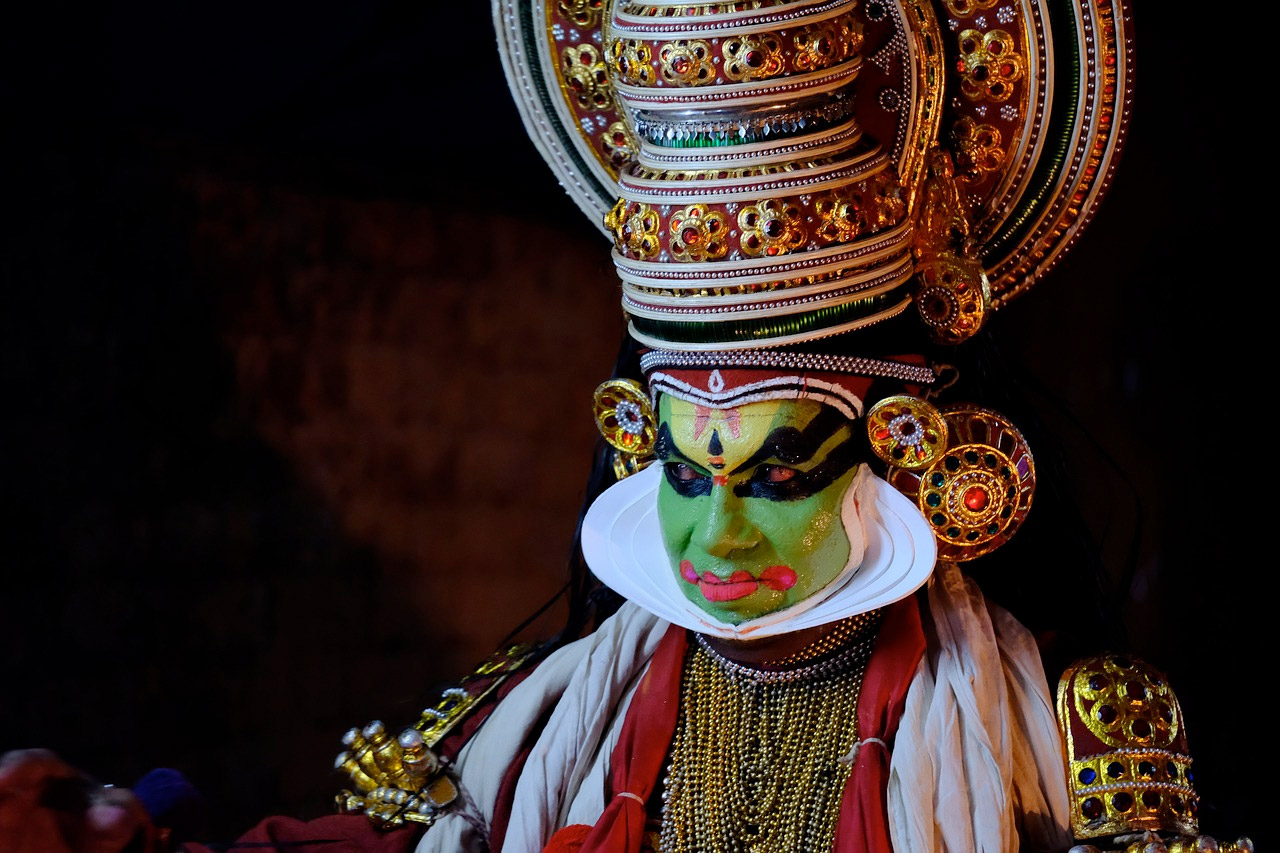 Any discussion on the art forms of Kerala must undoubtedly begin with the great Kathakali, the symbol of Kerala’s rich heritage. Kathakali is the finest of all art forms prevalent in Kerala and is rightly counted as the icon of the state. Kathakali employs a vibrant mix of exquisite makeup, music, and costumes for its performance. It uses music, mudras, and the facial expressions of the performer. The movements of the eye and the coordination between the music and hand gestures are quite critical in deciphering the meaning of the action portrayed.

The artform narrates stories from Indian epics in a unique manner with the help of specific mudras. Hence to comprehend the meaning of the act performed, one must be well versed in the epics. In this art form, every minute detail is of utmost importance, from the colour of the costume to the subtle facial expressions; every element contributes to the interpretation of the act portrayed onstage. Kathakali is the most distinguishing factor of Kerala and attracts art lovers from every corner of the world. 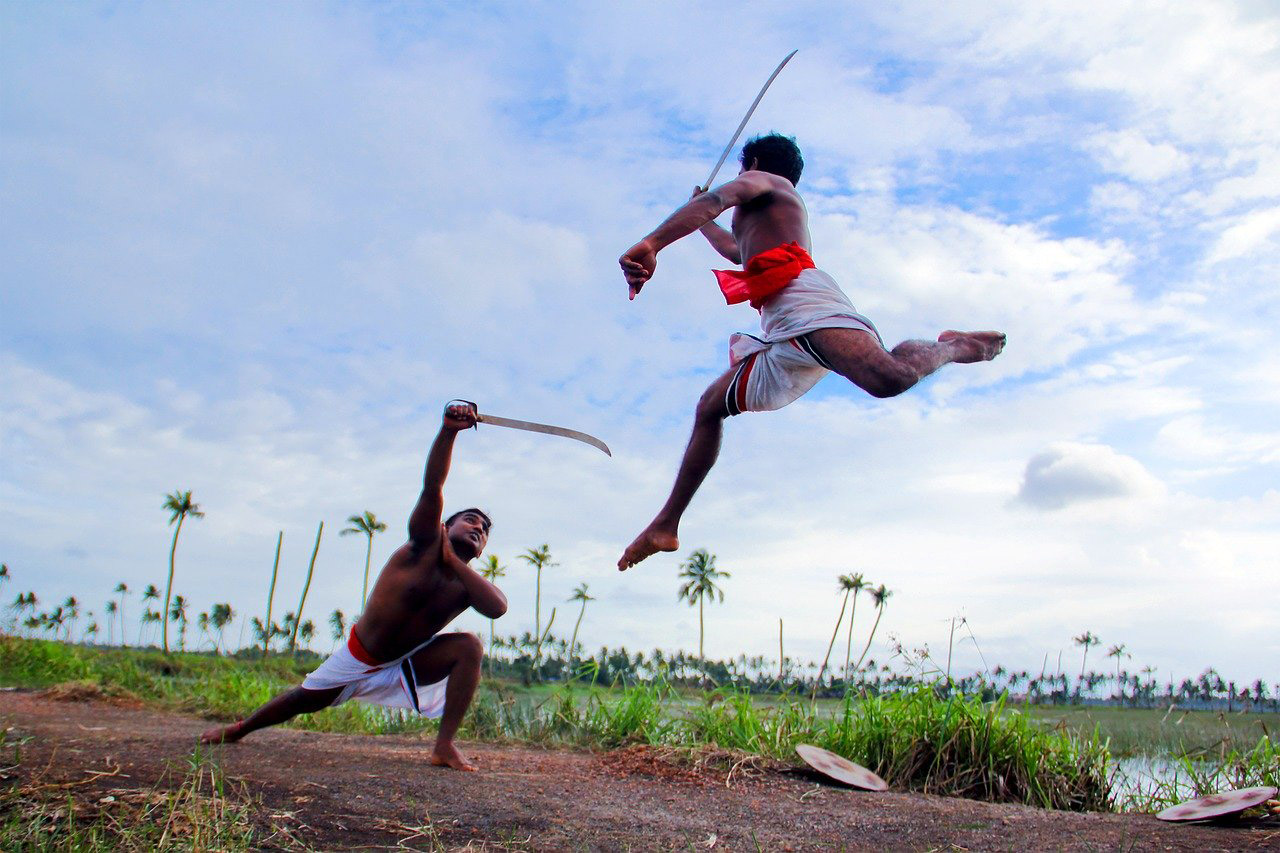 Known popularly as the “Mother of all Martial Arts” in the world, Kalaripayattu is believed to be the oldest of all martial art forms. A method of warfare that is said to have originated in Kerala, about three centuries ago, Kalaripayattu is an art form that will keep the viewer thrilled and engrossed throughout the performance. A defensive art form, Kalaripayattu, is said to be an antecedent of popular martial arts such as kungfu. From yoga to healing, it encompasses several disciplines.

Kalaripayattu uses a wide range of weaponry, including sharpened knives, urumi (flexible sword), long staff, sword, and shield, among others, based on the experience and ability of the trainee. Besides being a Martial art, Kalaripayattu also focuses on unifying the mind and the body of the performers. It lays stress on the flexibility of the body and the concentration power of the participants. It is a stunning visual treat and should be experienced by everyone. The quick-paced movements, extreme focus, and the stunts are sure to keep the viewers at the edge of their seats.

Often characterized as “the poor man’s Kathakali,” Thullal has an interesting tale about its origin. Kunjan Nambiar, who had unintentionally dozed off during a performance of Chakyar Koottu, was ridiculed by the Chakyar. In reply to the ridicule, Nambiar created the art form of Ottamthullal, which discusses social and politically relevant issues. Unlike all the art forms discussed till now, Ottamthullal involves only one performer, who gives out a solo performance.

Ottamthullal is a mix of humorous and witty dialogues sung lyrically. This art is a delicate composition of dance, music, vibrant expressions, colourful costume, and light-hearted humour. Unlike the other forms of art such as Kathakali or Kutiyattam, Ottamthullal can be viewed and understood by anyone. Also, unlike the other artforms that take months of practice, Ottamthullal gives the performer freedom to improvise. The lyrical narration that accompanies the dance is greatly coordinated with the latter; the recitation is mostly lyrical and poetical giving the viewer a unique and brilliant experience.

Kutiyattan is an ancient performing theatre art believed to be at least a thousand years old. It is perhaps the only surviving theatrical art form that is based on the ancient Sanskrit theatre. The word Kutiyattan, which means “performing together,” itself gives us a glimpse of its content. The actors of the stage use tenuous makeup, which itself takes quite long to complete and wear elaborate costumes. Like in Kathakali, every single shift in the facial expression or a slight movement can depict the inner thoughts and conflicts of the character on stage.

Due to its universality and rich heritage, Kutiyattan has been recognized by UNESCO as “a masterpiece of the oral and intangible heritage of humanity.” The actors are required to undergo rigorous training of about ten to fifteen years to be deemed a professional. The actors elaborately portray every single situation that the character encounters. Apart from the serious characters like the Chakyar and the Nangiar, Kutiyattam also hosts a comic character named Vishakha, who gives out humorous lines and speaks in Malayalam, while the other characters use Sanskrit. Kutiyattam is one of a kind of drama that should not be missed if one visits Kerala.

“The Dance of the Gods,” Theyyam is an art form that is said to have been originated from northern Kerala, most specifically from Malabar. It is performed to offer worship and devotion to gods, and hence, it is a kind of a divine art form. The performer usually wears an elaborate costume, mostly coloured red. It is believed that the spirit of the deity is transferred to the performer during the performance. Theyyam is primarily performed in the months between November and December in the north Malabar region mainly, Kannur, Kasargod, etc. The art form is said to be at least 1500 years old and is performed with much reverence and held in high esteem all over Kerala’s state.

Mohiniyattam is a dance form usually performed as a solo performance; it is also based on the subtle facial expression, hand gestures, and body movements, all of which coordinate to narrate deep meanings to the audience. The dancer is usually clad in a simple white sari with golden borders and seeks to represent the usual dressing style of a Keralite woman. Mohiniyattam is an amalgamation of some of the essential elements of Bharatanatyam, Kathakali, Kutiyattam, and Koothu. The musical component of the art form is sung in Manipravalam, a mixture of Sanskrit and Malayalam.

Regarding the other art forms of Kerala, Mohiniattam employs simple and elegant costume and makeup but is not a bit less mesmerizing. The mudras and gestures used in Mohiniattam can signify particular objects and things and are employed to tell a story. Hence, more than just being a dancer, the performer engrosses the audience by narrating the story through her elegant and subtle movements. Mohiniyattam is the soul of all the artforms of Kerala and is one that should never be missed.

The art form is quite ancient but has been successfully transferred from one generation to another. In the olden times, Chakyar Koothu was only performed by the people of the Chakyar community. The Chakyar was the court jester and hence was free to criticize the actions of the king. In modern times, Chakyar Kooth has taken on a new colouring as it represents the mythological and epics in a rather interesting way. Chakyar Koothu embodies humour and uses it to engross the audience to the act. Apart from the solo performer, Chakyar Koothu involves two other instruments, the Mizhav, and the Edathalam. Like Ottamthullal, Chakyar Koothu is also a kind of social criticism and satire of the social situation.

Pulikali is a street art form that is enjoyed far and wide in Kerala at the time of Onam. To perform this art, performers and artists apply black and orange paint on their bodies to resemble a tiger. The other performers will be dressed as hunters. The whole idea behind Pulikai is tiger hunting, and the performers enact the role of the tiger and the hunter in accordance with the music provided. The performance is quite exhilarating and exotic; the viewers are in for a visual threat. Mostly Pulikali takes place on streets and is considered to be a folk art of Kerala. The quick-paced movements and the fast-paced music accompanying the performance add a sense of thrill to the performance. Pulikali is also an art form that is admired by people all over the world.

Padayani is a ritual art form performed in the temples of Goddess Badrakali in Kerala. The Artform narrates the story of Goddess Kali’s victory over the Demon, Darika. The performer wears colorful and vibrant masks and Kolams which represent various Gods and Goddesses. Padayani is also performed to thank the Goddess for the harvest. The performance is spectacular and embodies in it, elements from different art forms across Kerala. It bears a considerable resemblance to the Artform of Theyyam.

The Artform of Kumattikali is mostly performed during the festival of Onam, the state festival of Kerala. The performers wear an outfit that is specially made from a type of grass called Kummattipullu. The colorful and painted masks depict characters from Indian Mythology. The dancers move from house to house, collecting presents from each. Kummattikali is most prevalent in the Thrissur district of Kerala. The performance is accompanied by music from a unique musical instrument named “Onavillu.” .Kummattikali is an art form that is inherent to Kerala and is sure to provide a memorable experience to the viewer.

Thiruvathira is also an art form that is based in Kerala and performed during Onam. On this particular occasion, women dress in traditional Kasavu saree and dance in a circle around the Nilavilak. The dance is quite graceful and has tender and elegant movements, with the rhythmic clapping of hands. Unlike the artforms discussed above, which require strenuous training and years of experience, Thiruvathira is played by every woman. During the Onam season, each house would host a Thiruvathira in their compound and be considered a quintessential part of Onam celebrations.