The practice of folk dances showcases the culture of a region, accentuates their legends and folklore, reiterates their history and also serves as performative gestures of offerings to the gods. The diversity of India boasts of an innumerable variety of dance forms. These have grown and have been nurtured for years giving prominence to the people. The sense of artistry, respect, and attachment to traditions are evident in the ardent performances.

The southern region of India is a trove of splendid and intrinsic folk forms of art. Today, we explore the brilliant assortment of talent, music, and color, and heritage that have been thriving in South India.

The peacock dance of Tamil Nadu, Mayilattam, brings upon the platform performers who are dressed in costume. The attires are adorned with movable beaks and elegant plumes. They pay tribute to Lord Subrahmanya’s most sincere attendant, the peacock.

Mayilattam is an extremely difficult form of dance that imitates the graceful style of the bird. The dancers require unfaltering focus and exquisite skill to execute the gliding movements. Wearing a piece of wood attached to each of their feet makes the performance more difficult. This artistic dance is usually performed in the temples of Lord Subrahmanya or the Murugan temples. 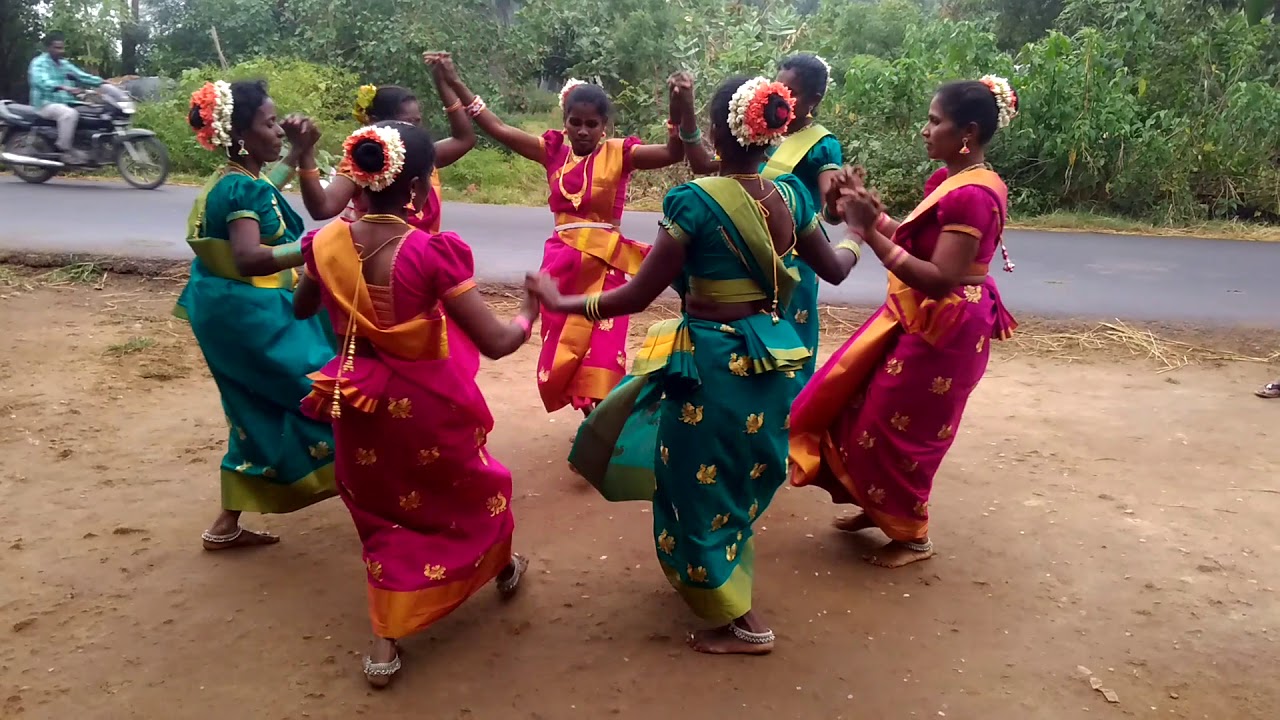 In the region of Tamil Nadu, the Kummi dance is performed by women, who dance in circles and to the rhythm of their claps. This ancient folk dance does not need the accompaniment of a musical instrument. The performers sing their songs and move to their gracefully synchronized lively beats. Other than familial ceremonies and occasions, it is performed during religious festivals. Harvest festivals like Pongal and the nine-nights-long Navratri are some of the important events. 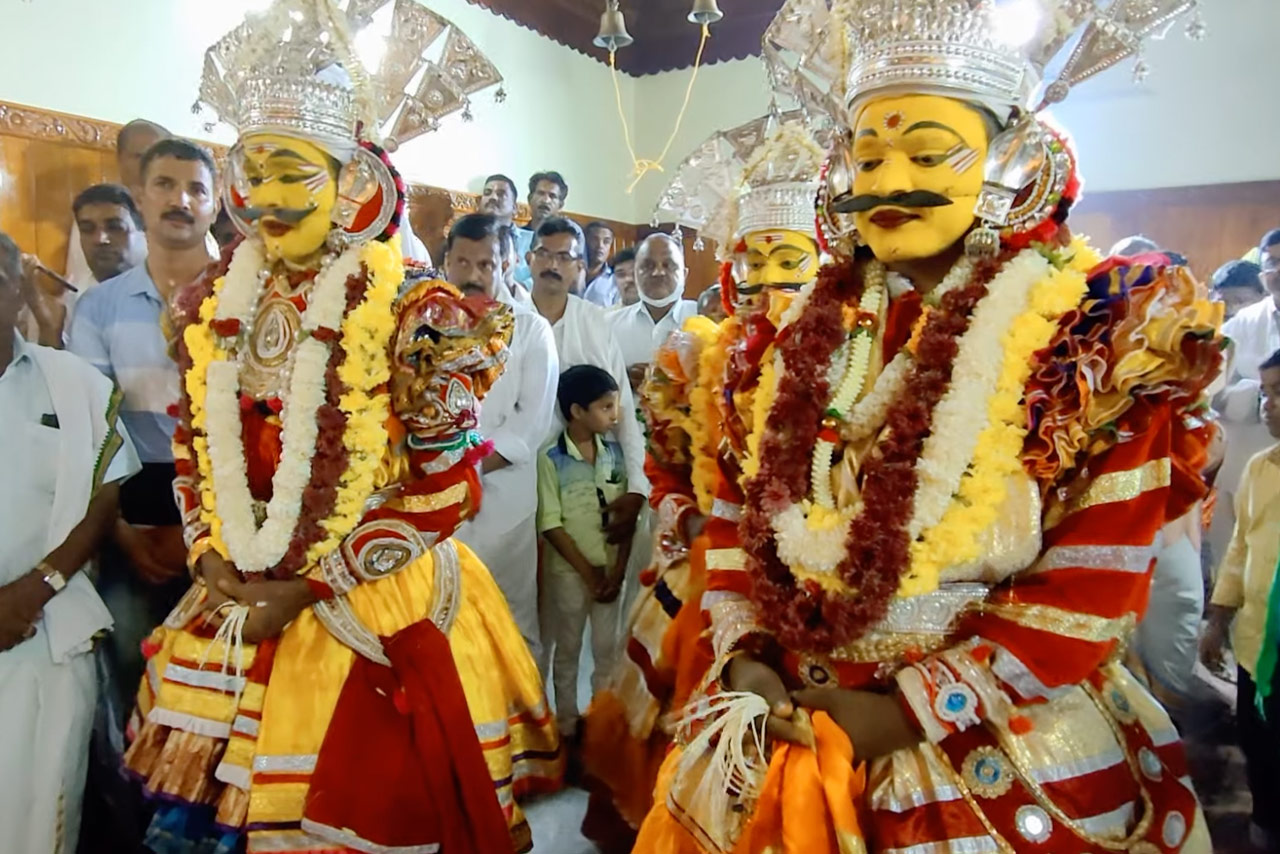 One of the main festivals held in Puducherry, the Garadi dance is performed in acrobatic style. Dancers are dressed as monkeys and produce similar movements and style. It originated from the great epic Ramayana, when the army of the monkeys in Sugreev performed this dance to celebrate their Lord’s victory and his safe return with his wife, Sita. The dancers wear ten iron rings called ‘Anjali’ on each leg and dance to the beat of the ‘Ramadolus’ drums. The intricate performances last for up to five or eight hours and often throughout the night.

Padayani is a folk dance that is regarded as a communal activity where the locals take part in the preparations. It is performed in the Bhadrakali temples, in places like Kottangal, Othara, and Kadammanitta, in south Kerala. This intensive performance is inspired by mythology. Commemorating the dance that was performed by Lord Shiva to appease a raging Goddess Durga, after she defeated the demon, Darika. The performers are required to take rigorous training to maintain their physical agility and strength.

Following a special diet routine that enhances the cleansing of the spirit and the physique is also a part of it. They wear spectacular masks and headgear, elaborately decorated with paintings done on the leaves of the areca nut palm. These terrific masks, called ‘Kollam’, are representations of spiritual energies and divine characters. These can be seen in the Ganapathi Kolam, the Yakshi Kolam, the Pakshi Kolam, the Pishachu Kolam, and the Bhairavi Kolam. The exciting songs of the Padayani performance enchant the atmosphere through instruments like the Chenda and the Kaimani.

Oyilattam is a folk dance that originated in the southern region of Tamil Nadu. It is performed during festivities and important occasions. Initially it was only performed by men. Oyilattam requires the performers to move to the rhythm and harmony of the percussion instrument Thavil. With colorful kerchiefs or flags held in their hands and bells tied around ankles, the dance is a bright spectacle of jingles and vibrancy that demands powerful and intricate leg movements. Performed with enthusiasm, the primary themes are molded from the ancient epics of Mahabharata and Ramayana. It divulges to the audience knowledge and wisdom that are passed onto the next generations.

Majestic artistry, detailed adorning and ritual folk dance of absolute splendor define the Theyyam performances popular in north Kerala, specially Kolathunadu. Through graceful mime and uplifting music, the dance brings to life the stories of ancient times that are special to the culture of the State. It is believed to be a way to appease and make peace with the gods who ensure good harvest and prosperity in return.

The performers of Theyyam belong to communities like Vannan, Malayan, Anjunnoottan, and Kopalar to name a few. The first part which is the introduction to the Theyyam performance is known as Vellattam or Thottam. The wonderful dance is accompanied by the ceremonious music of Chenda, Veekan Chenda, Ilathalam, and Kuzhal.

There are over four hundred sets of Theyyam performances, each with their unique music and style that shape their story. The most prominent among these are Raktha Chamundi, Theechamundi, Muchilottu Bhagavathi, Wayanadu Kulaven, and Gulikan. Every performer gives diligent attention to represent and depict the legends of heroes as well as honor the spirits of their ancestors. Their flamboyant costumes and gorgeous makeup are both daunting and sublime.

It encompasses the colors and tradition of Kerala. The ornamented headgears stun the audience into awe, and none can take their eyes off the splendid stage. The paraphernalia of the dance, comprising facial make-up, costumes, and ornaments, all depend on the nature of the Theyyam performance.

The street theater of Theru Koothu, mainly performed in the villages of Tamil Nadu. It is inspired and derived from the Puranas, the Mahabharata, and the Ramayana. The narrative and dialogues ary improvised and songs and music prevail through the performance. The play is led by a Sutradhara or director called ‘kattiakaram’.

It includes stock characters like that of the buffoon or ‘komali’ for entertainment. Most of the melodies are based on Carnatic Ragas. These are produced across an orchestra of instruments including drums, pipes, and cymbals. The costumes and makeup of the actors are ostentatious and extravagant. Vivid colors are used to paint the face of some of the characters. There are ornamental designs flourishing the headgear, jacket, and lower garments or skirts. The classical ‘lokadharmi’ mime is incorporated for the acting technique and the scenes often include enactment of gore and violence.

Since recent years, there has been an increasing priority on monetizing such performances. Despite the restraints, the performing groups do not lack in spiritual devotion and showcase the rich heritage of their culture. These dancers and musicians are not just talented, but also take pride in their hard work to include minute details of significance in the performances.