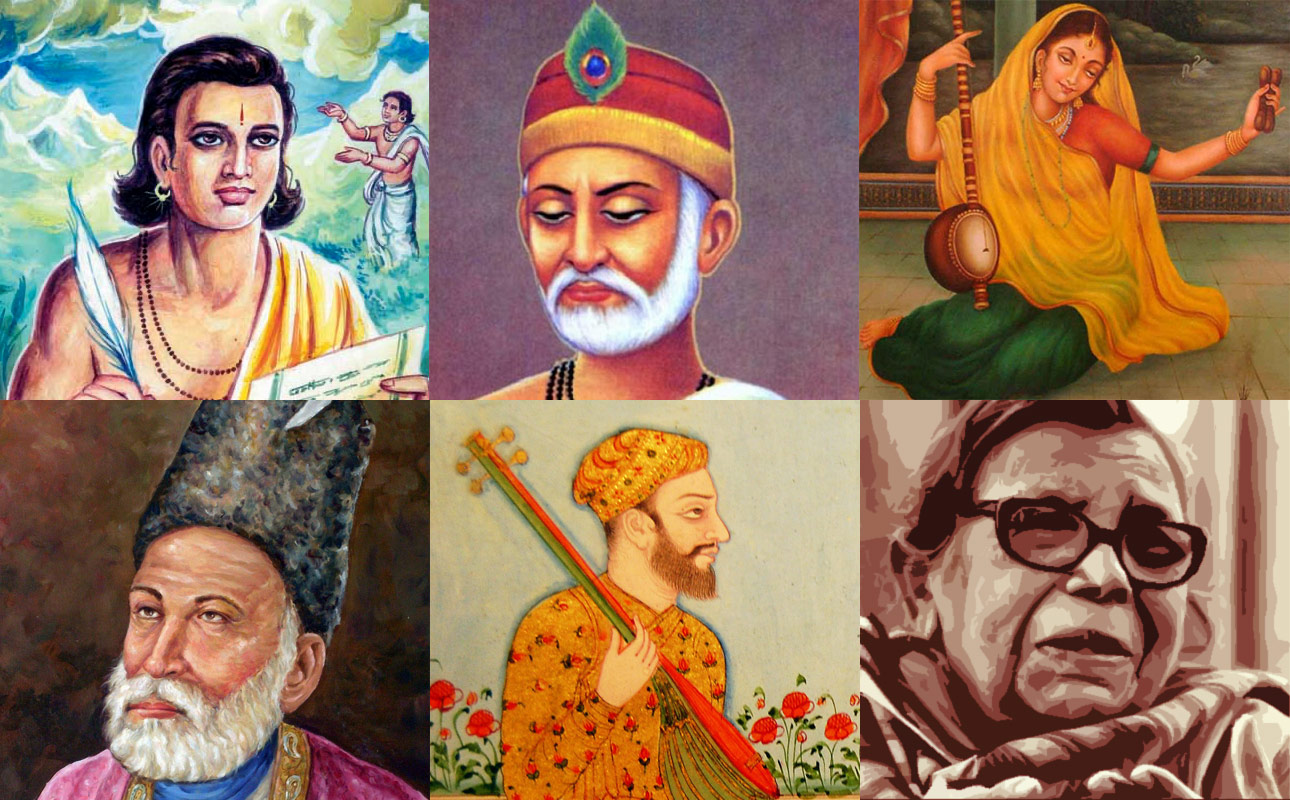 Indian Poetry needs no introduction as this form of art has already accomplished much and is ever since pacing towards greater heights.  This blog is dedicated towards such skill and such poets who had completely immersed themselves in this art and have come out shining the brightest.

Poets like Kabir, Glaib, Meera Bai and many others great Indian poets have created history and have moved the world with their prolific writings.

Is this poetry to your ears? A look at the great Indian poets who still warm our heart with their epic literary creations.

There is something about poetry. In the age of Twitter and texts, little means more. The power to express more in less is what poetry is probably about. However, that is not entirely true because poetry is less about the number of words than about their quality. It is more about thoughts and emotions that flow with a fluency that is many times unmatched by anything else. The ebb and tide of words are not short of a musical fervor that sways the reader in a trance. A trance that they usually come out of feeling more wiser and more into themselves.

Pick up any lines from the greatest of poets and you will be left with a sense of aloofness, as well as rootedness. Some poetry moves in rhythm, some in jerks of hard-hitting punches. Some breeze to the tune of what lies on the outside. And some dig deep into the trenches of the heart and mind. Poetry in all its forms and kinds has the power to touch not just individuals, but societies at large. It has the power to invoke, evoke and provoke.

The culture of poetry in India

India has not been bereft of the most exceptional poets. There have been and continue to be renowned artists whose way with words has remained as legacies forever. Of course, poetry as a form of art has been blessed to have artists all over the world. Artists whose works have been the pillars on which in many ways, literature found shape and form. Also, irrespective of space and time, poets have risen across ages and periods, across different languages and regions.

India has a rich tradition, glorious history, and the artistic advances have been extraordinary. From ancient times, through the medieval ages to modern times, poetry has been expounded in its purest and deepest forms. Whether in Sanskrit, Urdu, Hindi, or any other languages, such as Tamil, Kannada, Bengali, etc. up until in English, poetry has found honest connoisseurs everywhere through all times.

And so here we take a look at the 10 most influential poets through Indian history. Don’t be mistaken into thinking that there were none others. For there were and will be. But we sieved through to bring some of the best known and renowned poets whose influence through their medium of poetry has been far-reaching.

Regarded as the greatest Sanskrit poet of all time, Kalidasa’s works date back to the 5th century. His works were based on ancient stories and texts from religious content, such as the Vedas, Puranas, and epics. Some of his works include the legendary Shakuntala and other plays, such as Malavika, Urvashi, and more. He also wrote epic poems, such as Kumarasambhavam, Raghuvamsha, etc. Kalidasa is one of the exceptional literary figures because he influenced many subsequent poets to come. He was widely acknowledged and recognized by western poets and writers too. He is often referred to as the Prince of Indian poets.

It was in the 15th century that India found one of its most profound poets of all time. Kabir ke Dohe are perhaps read by all even if it meant reading them in school. The depth of Kabir’s poetry is by far its most defining aspect. The writings on life, faith though simple are steeped in revelation and substance. He is also revered as Saint or Sant Kabir and he was critical of the dominant religions during the time, namely Hinduism and Islam. He believed in a true God and devotion. His writings are in Hindi mixed with certain other dialects, such as Braj, Awadhi, and Bhojpuri.

Ghalib started writing at the young age of 11. He was one of the most prominent poets during the end of the Mughal Empire. Known as Mirza Ghalib he wrote in Urdu and Persian and was well versed in Turkish and Arabic. His writings center on the various mysteries and philosophies of life. Though he wrote in many forms, the ghazals written by him are his most famous works. He spent most of his life writing for the Mughal court, though his fame and influence had far more reaching effect after his death than during his lifetime. Some of his famous ghazals include Hazaron Khwahishen Aisi, Dil E Nadan Tujhe Hua Kya Hai, and more.

Also called the Father of Urdu Literature, Amir Khusrow was born in the 13th century. He is also credited for introducing the qawwali. However, his poetry had many forms, such as ghazals, masnavi, rubai each of which later was incorporated as an important part of Urdu poetry. Some of his works include Wast ul-Hayat, Ijaz e Khusravi and more.

Mirabai is well known for her absolute devotion and romanticism to Lord Krishna. However, it was her poetry that acted as the medium to reach unfathomable connection and affection for Krishna. Her writings were laden with love, mysticism, and celestial spirituality. Yet, her contribution to the literature and style of writing holds its own and remains an integral part of Indian literature.

Born in the 18th century, Mir Taqi Mir in many ways shaped Urdu poetry. His writings were centered on spirituality and love and were heavily influenced by his personal life tragedies. Some of his works include, Dard be Ikhtiar, Chaman main gul ne jo ka and more.

The Noble laureate in Literature, it is unlikely to have a list of the most influential poets and not include Rabindranath Tagore. Though most of his poetry is written in Bengali including the ethereal Gitanjali, many of his works are in English too. The Bard of Bengal has been credited for translating most of his works into English. Some of his best-known works include Birpurush, as well as composing the national anthems for India and Bangladesh.

Known by the pen name Madhavikutty, Kamala Surayya or Kamala Das is a tall figure in Indian poetry. Born in Kerala in 1934 her writings revolve around love, sexuality, politics, etc. The portrayal of women in her poems is perhaps her biggest contribution to the art. She is in fact, also often referred to as the Mother of Modern English Poetry because her writings were direct and often path-breaking. Some of her works are The Looking Glass, In Love, etc.

Known as the Modern Mira, Mahadevi Verma’s poems are rich in emotions and natural surroundings. She has been awarded the Padma Vibhushan and is often regarded as one of the most important stalwarts of Hindi literature. Her works are often a part of the school curriculum and she was involved in academics becoming the Principal of a women’s college in Allahabad. Some of her famous poems include Aa Gaye tum, Murjhaya phool, and more.

The Nightingale of India, Sarojini Naidu began writing at the age of 13. Her poems dwelled upon a large expanse of subjects, such as patriotism, death, love, and nature. Her metrical forms earned her respect from all across the world and the mastery of her art became fundamental in modern Indian literature. She was also a prominent figure in the Independence movement. Some of her works include Nightfall in the City of Hyderabad, Autumn Song, and more.

There are a lot more poets who have influenced and shaped the literary foundations and spires in various ways. Tulsidas or Rahim, Sri Aurobindo Ghosh, or Suryakant Tripathi Nirala. The names continue to roll, be it A.K Ramanujan, Bishnu Dey, Sumitranandan Pant, Michael Madhusudan Dutt, Jayanta Mahapatra, Nissim Ezekiel and many more.

Poetry is perhaps a song, a rhythm, or also just a thought. It is an expression, a demand, a command, and sometimes just a wishful dream. It is all of it rolled into a sense of being that often leaves one wanting more. If you haven’t been a poetic reader, maybe sometimes, it’s worth it to glance through a few couplets or lines. Who knows you might fall in love with them before you even realize it.