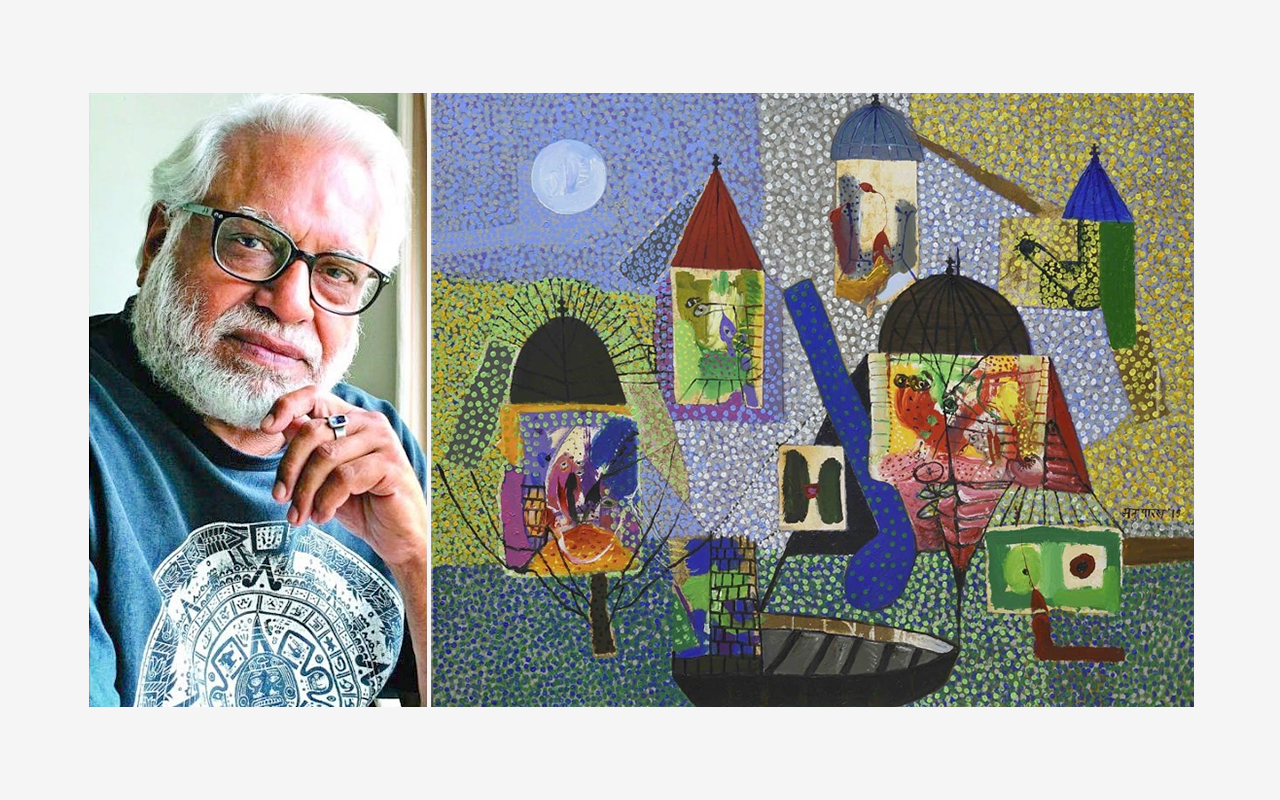 Artists pour their entire soul while giving life to a painting or piece of art. And their skill, perfection and mastery, finds expression on empty canvases. One such well-known and exceptionally talented artist is Manu Parekh. A painter for whom the city of Varanasi has been an incessant muse, it is Hedonova that has recently invested in Manu Parekh’s Banaras.

Parekh was born in Gujarat in 1939 and forged into art as a career in the 1960’s. Inspired by Rabindranath Tagore and S.B Palsikar, Parekh combines the expressionist techniques through the use of bright colors and pointillist elements. These art techniques are often used by indigenous artists and European impressionists.

He visited Varanasi after his father’s death and it is from then onwards that the city cast a spell on the painter. The city of holiness, hopes, faith, dreams and dead has many hues that have been captured over the years by Parekh in his many paintings. 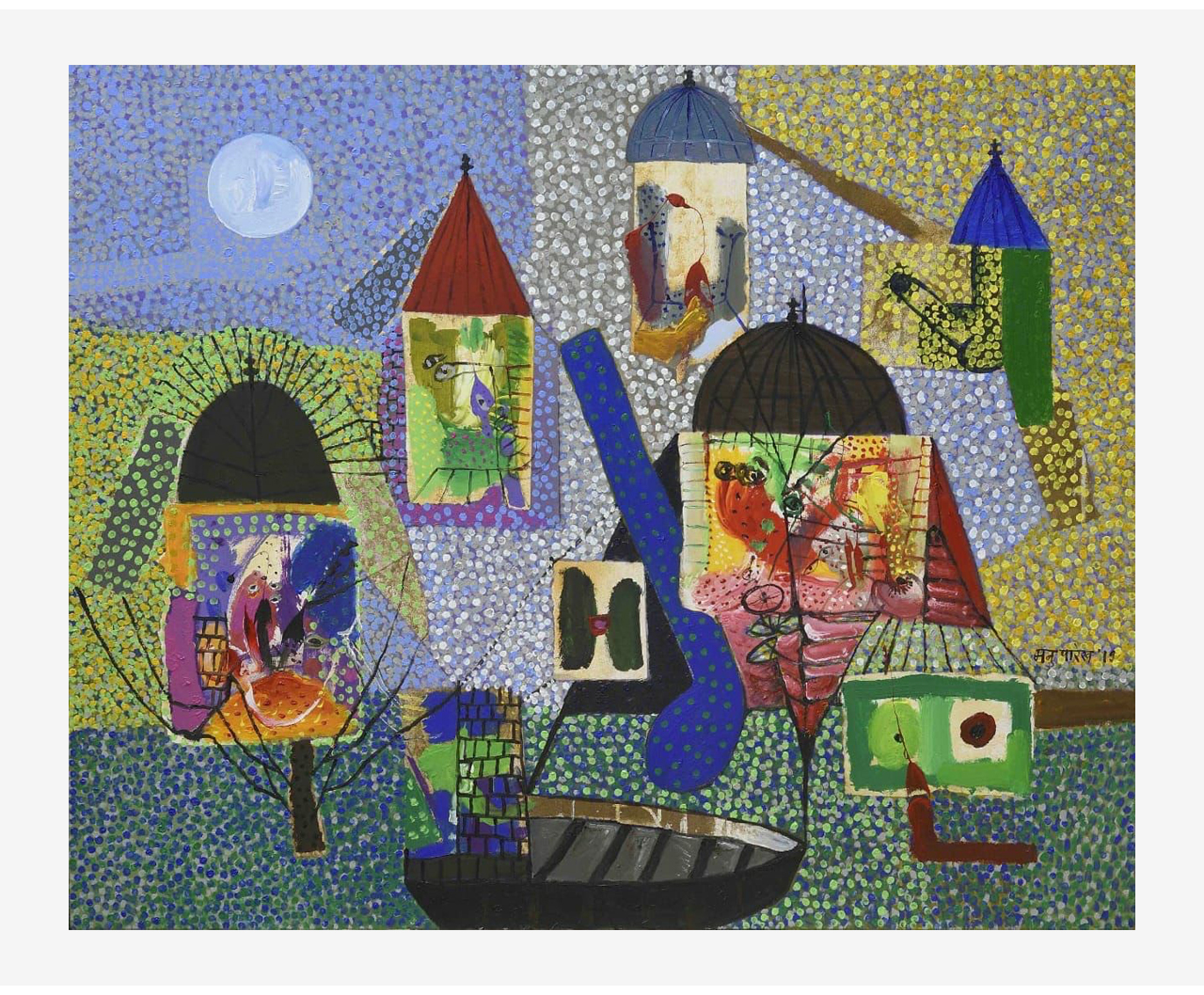 Banaras (2019) by Manu Parekh is an integral piece of his repository of art works. Prominent, sharp lines and the vibrancy of colors exude an energy and charisma that instantly hit the onlooker. The city of Varanasi is an embodiment of the cycle of life and death, strewn with its many contradictions and contours.

His work entices the viewer to observe the emotions that are screened behind the riot of colors and structures. The techniques of pointillist and tribal Indian art are all too visible as the temples, rivers, ghats and shrines all intermingle fluidly on the canvas. In this work temples appear inclined and he also experiments with sexual metaphors, constructs, color, figuration and more. In the words of Manu Parekh, ‘This artwork is my experiment with the technique of ‘pointillism’ and I thoroughly enjoyed working on this painting – as it gave me an opportunity to handle space very differently. The complimentary tones give the work a sense of joyousness and vibrancy.’

Hedonova has invested in Manu Parekh’s Banaras (2019). By investing in Hedonova, you too can invest in this brilliant piece of art. In fact, Hedonova boasts of investing in art paintings that are created by the best in the business.

Art is of course, all about creativity. Each piece is created with utmost energy and skill. And hence, the geniuses and maestros of the art world are highly valued. Their paintings adorn homes, offices and more. It is a valued treasure for connoisseurs of art and most often these painting are sold in millions if not less. Since their worth is much, they are not always affordable by all. And that is where Hedonova steps in!

Invest in Banaras – Invest in Art

With Hedonova you can begin investing with $1000 or Rs. 75000 and share a part of priceless art works. Also, there are many art enthusiasts, but they may not always have access to art auctions etc. Hedonova helps facilitate this and introduces art as an alternative investment asset.

Besides, investing in art is highly lucrative. It appreciates with time and can be sold in the future at a much higher profit rate. Also, multiple investors invest with Hedonova and this helps in buying the paintings and art works that are priced at millions and millions of dollars.

In fact, Hedonova also invests in many other alternative investment assets, such as real estate, data centers, litigation, P2P lending and more.

Lastly, if you appreciate true art, viewing Manu Parekh’s Banaras will definitely throw you in a space of enchantment and wonder. The vivid colors, the angles, the interpretations etc. will leave even the not so artsy, interested. And so its no surprise, if you would like to invest in this splendid piece of art, it is more than just about colors and brush strokes. It is but the viewing of a city that is steeped in history, dichotomy and a reality that is striking and inspiring.

Hedonova has invested in Banaras and awaits for you to join in.