To discuss Indian jewelry today, we must pan out to cover the wider region of the Indus River Valley civilization that stretches from West Pakistan through to Bangladesh. Eons ago, this entire region began what would turn into a vast trading network that would inform migration, economy, and technology around the world.

Jewelry has been a supreme artifact that offers glimpses into the ancient practices of the Mohenjo-Daro and Harrappan civilizations. Sculptures excavated from archaeological sites show men and women wearing necklaces and bangles. Incredibly, some jewelry pieces that date back to 2000 B.C. remain intact with intricate beading and stringing.

This jewelry has found its way across the region and to farther reaches across the Arabian Sea, indicative of widespread trade routes that included the exchange of precious jewelry. It’s no surprise that even today, jewelry from India is sought by wearers around the world.

The culture that surrounds adornments and jewelry in India tells unique stories about the diverse people that reside across the mountains, deserts, plains, rainforests, and seascapes that form this wide area.

Some of the most stunning jewelry pieces designed and created in India are reserved for women to wear. Even so, across diverse regional and tribal cultures within a single country, Indian jewelry marks important cultural traditions for men and women.

Women have been the beneficiaries of deep ornamental culture in India for millennia. Wearing jewelry accentuates and protects the female physique. The feminine body is considered the ideal form of beauty, and it is customary to imbue it with mystery, grace, and value through different forms of Indian jewelry.

In historical custom, Indian girls were deemed women near the age of 16 years and would thus begin to wear the traditional “solah shringar” – 16 adornments. Some women continue to incorporate these adornments in their daily wardrobe. Many have fallen out of custom and are worn only during special occasions and ceremonies.

The solah shringar covers the woman from head to toe. They are believed to offer protection, a delicate shield of armor over the female body. The 16 adornments are:

A fascinating aspect of Indian culture lies in its vibrant tribal affiliations and regional diversity. From north to south, east to west, languages can change significantly, not just by accents, within miles. India, since its independence, has tried to offer protection to tribal groups who continue to practice and protect their ancient cultures.

In the Indian state of Madhya Pradesh, in an area called Bastar, tribal people wear jewelry that incorporates peacock feathers and wildflowers. The state of Rajasthan’s many tribes are famed for their uniquely oxidized silver jewelry and gemstones. Jaipur, the capital of Rajasthan, is a Mecca for jewelry design and gemstones. In the eastern states of Sikkim and Meghalaya, red coral beads and turquoise are found in tribal jewelry.

As mentioned, some jewelry is reserved for special occasions, like marriage ceremonies. These adornments can also mark other significant life events, like births.

A fun example of the primacy of jewelry for celebration in India is seen through the holiday of Raksha Bandhan, which is all about adorning men with bracelets.

On Raksha Bandhan, sisters gift their brothers beautiful, beaded strings and tie them around their brothers’ wrists. This symbolizes the sisters’ prayers and wishes for the happiness and safety of their brothers and ensures that the brothers will in turn protect their sisters.

Thus far, we’ve introduced different types of Indian jewelry that harbor great cultural importance, but there’s more to the story. Much of the jewelry made and worn have significant connections to health and wellbeing.

Many of the pieces that make up Indian women’s “solah shringar” have roots in Ayurvedic healing traditions. Ayurveda is an ancient holistic healing system that seeks balance in the physical, mental, and spiritual bodies of an individual to bring optimum health. Ayurveda relies on balms, tonics, and elixirs made from plants and natural ingredients as well as stimulating different regions of the body.

In Ayurveda, the nose ring pierces a nerve connection linked to female reproductive organs. By wearing a nose ring, women promote their sexual health, and during childbirth, it is believed to help a woman find some relief and protection from pain.

Continuing with the emphasis on balance in Ayurveda, bangles have important circular energy that boosts blood flow through the body. The firm round shape of bangles and other bracelets that encircle the wrist and brush against the skin transfer energy to the body in an infinite loop.

Extending from Ayurveda, many other pieces of jewelry in Indian traditions touch certain nodes of pressure and nerves that can enhance the body’s functions. Indian jewelry in USA usually comes in the form of necklaces, earrings, toe rings, and bracelets, many of which have major acupressure applications.

The earlobe has been linked to the kidneys and brain. Sustaining pressure, especially in the right ear, can send cues to the endocrine system to filter out toxins from the body and maintain healthy enzyme balance. Thus, the pressure that earrings give can help promote kidney function.

Toe rings enhance female sexuality and intimacy. Nerves in the toe have connections to the female reproductive system and the heart. Targeting both points, toe rings can help generate healthy, nourishing intimate relationships.

Jewelry’s Role in Balancing the Chakras

Indian jewelry connects to the body’s chakra system in many ways. Linked to the system of Ayurveda and to one of the most widespread religions in India, Hinduism, the chakras fuel earthly existence with spiritual consciousness.

Silver is believed to react with the earth and soil, bringing grounding and steadiness through the lower chakras. Thus, toe rings and anklets are often made of silver.

Necklaces of varying weights and stones bring strength and control to the heart chakra, a central node to bring the upper and lower chakras into alignment.

Jewelry’s Significance in the Hindu Religion

In India, Hinduism is practiced by more people than any other religion, although the region is rich in many other belief systems as well.

The Hindu religion is born from the Vedic era in ancient history. During that time, there were 36 essential ornaments a Hindu believer should wear, and while not common practice in modern times, Indian jewelry still makes connection to the divine spirit world.

Jewelry in India carries myriad symbols of the divine, such as lotus flower charms and elephants for Lord Ganesha.

Throughout Hindu texts, like the Mahabharata and the Puranas, gods and goddesses were depicted with jewelry and adornments. These ornaments played important roles in the lessons imparted through the text. For example, Draupadi in the epic Mahabharata, wipes away the sindoor in her hair part as she feels disgusted and abandoned by her 5 husbands.

Indian jewelry, with its metals and gemstones, build protective fields around the wearer. These pieces especially deflect the power of evil spirits to take over a person’s thoughts and mind.

Vehicles to Bridge the Body to Divine Consciousness 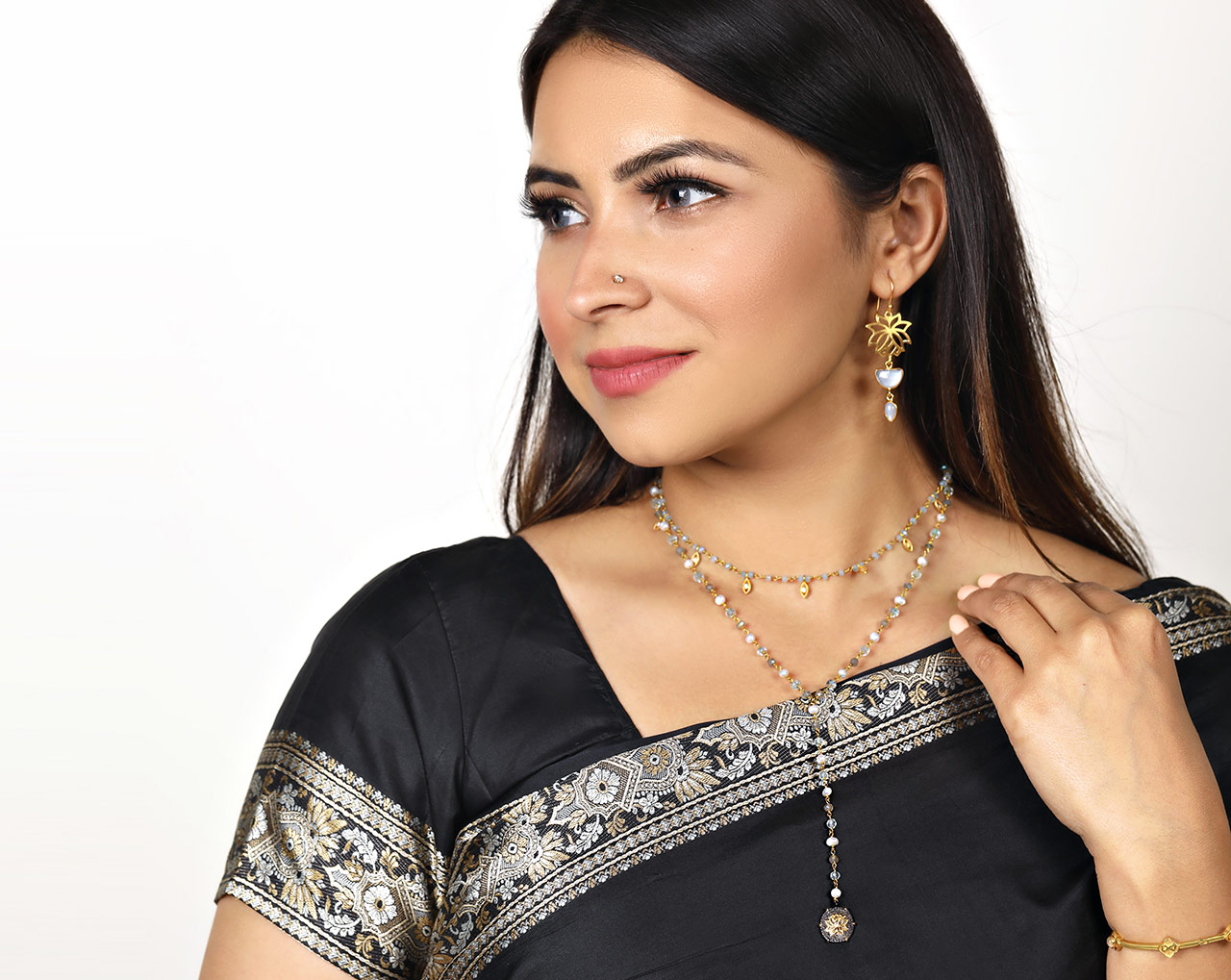 Interpretations of the role of jewelry in ancient Indian cultures link the wearing of jewelry to the invitation of divine embodiment. The divine spirits were believed to have inspired humans to create beautiful, material embellishments to wear so that the spirits could abide in the incredible designs and have human form.

Thus, it is believed that when a person wears certain jewelry, she seeks the energy of the divine to impart joy and abundance in her life. What’s more, the Hindu religion attests that certain stones and jewelry help facilitate the connection of divine consciousness with the human mind.

Indian jewelry in USA has grown popular largely because of the delicate details and stunning gemstones and crystals incorporated into traditional designs. Yet embedded in every piece of jewelry is a much deeper cultural connection to an ancient civilization.

From ties to specific regions to celebrations of femininity, jewelry from India carries important energy believed to bring protection and good health to its wearer.

Learning the meanings and significance behind each beautiful piece of jewelry can manifest an even greater understanding of the gifts an amazing place like India offers to the world.