The Indian Spices Board recently organised the 13th World Spice Congress in Ahmedabad with a  theme of ‘Target 2020: clean, safe and sustainable supply chain’. Spices are the main attractions of an Indian market. With a variety of climate in different regions, India produces a range of spices. Most spices are native to the sub-continent and some were imported initially. The main spice producing state is Kerala, which is also known as the ‘Spice Garden of India’.

Spices not only enhance the taste of our food, but also are an important part of our traditional medicine or the Old Naani’s Prescriptions. When most of the world was not even discovered, Indian spices were exported and used to enhance the flavors in different kitchens and were used as medicines worldwide. Spices are now grown and used across the globe in different ways and for various purposes. Here is a list of 10 spices that are a major part of Indian cuisine.

Hing or devil’s dung is one of the major spices used in almost every Indian dish. This pungent smelling spice is extracted from the dried gum secreted from the Ferula plant’s tap root, which gives a different aroma when used to make dal or rasam. It also acts as a digestive aid and is used as a condiment in food and pickles. This spice travelled to India and other countries from Iran and now holds a pride of place in every kitchen of the sub-continent.

Black pepper is the King of Spices, not because it is used for seasoning but for its medicinal properties. Usually found in South India, it has been a part of Indian cuisine since 2 B.C. It has various anti-oxidant properties and is a source of many usefulvitamins and minerals like potassium, vitamin A, and vitamin C.. It also fights cancer stem cells and stimulates your skin to produce pigments.

Ajwain or Bishop’s seed is often confused with the lovage seed. Ajwain is usually consumed after roasting or frying it in ghee after which it gives a complex aroma to the food. It has medicinal properties and can be taken to cure respiratory problems. This spice is probably a native to Egypt and travelled to India from near East, but is now only cultivated in Northern India and some parts of Iran.

Fenugreek or Methi seeds are one of the major ingredients of the various sauces and spice mixtures of not only Indian but Persian and Turkish cuisines. Fenugreek leaves are used fresh but its yellow colored-cuboidal seeds that can be preserved for later use. This is one sweet smelling spice with a slight bitter taste. It helps in reduction of body fat and enhances hair growth. Fenugreek seeds can be dried and then crushed for consumption to help women during menopause. 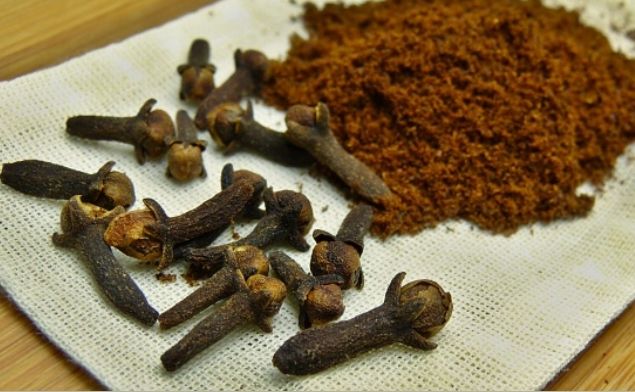 Cloves are dry, wood textured, nose-pin shaped spice, and its name is derived from the latine word ‘Clavus.’ This spice is comes from Maluku islands of Indonesia and is often consumed after roasting or frying it in ghee. It is also a major ingredient in the widely used spice mixture called garam masala in curries and is usually take to cure toothaches. Cloves are also considered sacred in Hindu mythology and are burned in pairs with camphor during rituals.

Cilantro or coriander or Dhaniya is a native to Southern Europe, North Africa and South Western Asia. It is an essential part of Asian and Russian cuisines. All the parts of the herb are edible. Its leaves are used raw as they can lose their fresh whiff if frozen or cooked. It is also widely used to treat digestive disorders and is highly beneficial in treating nausea and dysentery.

Turmeric is used in all kind of cuisines in India and its bitter taste gives a desired flavor to the food. Leaves of a turmeric plant are used to make different Indian sweets. It contains various types of powerful polyphenol curcumin, which can help in the treatment of all types of cancer with no major side-effects. Turmeric is usually found in India and has been a part of Siddha (Tamil) medicine for thousands of years. Because of its anti fungal and anti-oxidant properties, it helps in treatment of stomach illnesses, skin ailments, liver problems and wounds.

Saffron is the most delicate and most expensive of all spices in the world by weight. It originated from Greece and is mainly grown in Kashmir. It is used for seasoning and flavoring purposes in most of the Indian, Persian, European, Arab and Turkish cuisines. Saffron gives a beautiful yellowish-orange color and a fresh fragrance to the food and is obtained by drying the stigma of the flower from the plant saffron-crocus.

Cardamom or elaichi is one of the oldest Indian spices and the third most expensive spice by weight. Daily consumption of some cardamom seeds after meals or with tea can keep cancer away. It is a natural food preservative and helps in the reduction of tumor by blocking the growth of extra blood vessels in the human body. It is a major source of iron and calcium and is widely used to treat glaucoma.

Iran gave birth to the most common spice found in India. Today, India is the largest producer as well as consumer of cumin or jeera. It is believed to improve saliva secretion in the mouth and is thus used as a remedy for digestive illnesses and also works as a preservative. Cumin is also a part of traditional Brazilian cuisine and can be found in some types of cheese and home-made French cookies.