All You Need To Know About Vibrant Kalighat Paintings of Kolkata 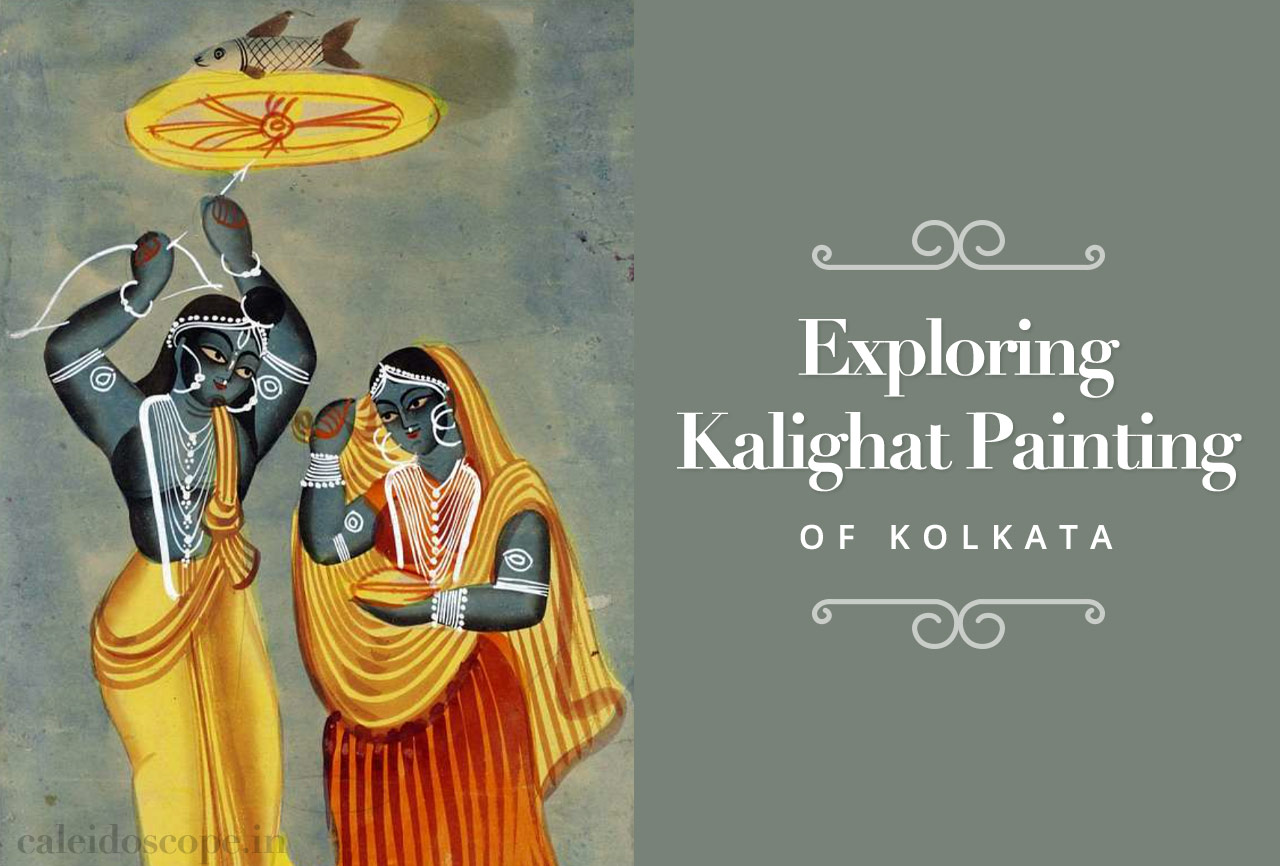 Over several centuries in literature, drama and visual arts, Kolkata has emerged as the unofficial cultural capital of India and has pioneered a number of movements and trends in the same. Kalighat painting is one of the rich legacies the country continues to retain.

Kalighat painting is a traditional Indian form of art that originated in the colonial atmosphere of Calcutta in the 19th century. The Kalighat Kali Temple is the birthplace of these paintings, and this traditional form of painting owes its name. Kalighat’s paintings have been mainly made of cloth or paper scrolls, and are named after the flourishing colony of the patuas or cloth artists at Kalighat temples in Kolkata. The focus for these paintings was mostly mythological characteristics that eventually evolved with other secular and contemporary themes into civil life in Calcutta. The style is characterised by the use of bold and vibrant colours and the strong and effective use of brush strokes. Experts consider the brushwork on these paintings to be soft, smooth, flawless and among India’s most seamless artworks.

Bengal’s earliest art was on clothes and patas and even on paper scrolls that represent scenes from Hindu holy epics such as Rama Charita Manas. The patuas were transported to the urban hub of Calcutta, to expand the client base for their art form. The way they settled down around the temples, in particular the Temple of Kalighat, was deliberate, as the subject of their art was most popular. Since Kalighat Temple was a renowned religious location, during their regular visits people would buy Kalighat paintings. The artists created paintings with a distinctive theme during the festivals, which was once again quite popular with temple goers. It is thought that around 1850 the particular genre of Kalighat painting emerged in India.

Jyotindra Jain, one of India’s most recognised art historians, believes that there was no discrete society of painters and artisans involved in making the Kalighat paintings. These paintings were done by artisans, potters, stoneworkers and men of other professions.

At the same time, Calcutta underwent incremental reforms in its British education system and began to accept fine art as a mainstream field of learning. This led artists to travel into the city, learn new techniques and appreciate contemporary themes, of which Kalighat paintings later show an influence. Two different styles, the Oriental and the occidental arose from Kalighat art, both popular in the country.

Motifs and Themes in Kalighat painting

The whole process of creating a painting from Kalighat depended only on the efficiency and amazing capabilities of the patuas. The paintings were made via a production line, and mostly by family members. The first was to copy the figures from an original crayon sketch, then passing them to the others who gave life to the painting by adding the basic colour to the flesh and muscles where required, further filling the other family member with colours, in different parts of the body and in the background. The final member, especially the master artist, would apply lamp black to the finishing touches. The background was kept unchanged or straightforward, eliminating all the necessary elements and therefore saving time. These were their skills that could readily create hundreds of Kalighat’s paintings in one day by a family of four to five members.

Colors and Hues in Kalighat painting

Kalighat Art is recognised for its brilliant, jewel-toned hues, powerful lines and its pristine visual harmony. Therefore, the use and availability of correct colours formed the basis of the whole artwork. The paintings were done using opaque colours, the paper and the brushes, based on water, were made from the hair of the goat or the squirrel. They used natural colours before the painters changed into cheaper manufacturing hues.

These colours, including crushed tamarind and bel gum, were blended in with a variety of binding agents. Colloidal tin was utilised in addition to the basic colours for decorating the paintings and giving them a sparkle.

If you walk into an average middle-class art-loving West Bengal household, you’re more likely to find a well-preserved portrait of Jamini Roy than a fancy-looking work by one of India’s many modern painters. The paintings had to be kept in good condition since Jamini Roy would not have sold his work if he had doubts about his buyer’s passion for art. While most Indian artists of the twentieth century were enthralled by modern art, which paid well, Jamini Roy stood out for his devotion to Indian traditions. He was so enamored with simple Indian folk art. Outside the famed Kalighat temple in Calcutta, he received his genuine calling in 1925. Jamini instantly recognised what he preferred and was interested in art after seeing a few Kalighat paintings on display outside the temple.  Jamini Roy threw up modern art and kept to his origins after being influenced by the simplicity of Kalighat paintings (Indian folk art), gaining millions of hearts in the process. He also abandoned the use of European pigments and even canvases in favour of more appropriate substitutes. He was awarded the Padma Bhushan by the Indian government in 1954 for his contribution to art.

Ramayana – His 1946 masterpiece, “Ramayana,” is widely regarded as his magnum opus by art lovers and critics alike. This particular work of his is a series of paintings spread across 17 canvases, created in the Kalighatpata style. To tell his interpretation of the old Indian epic, Roy employed vegetable colours and pigments obtained from natural ingredients. Sarada Charan Das, K.C. Das’s successor purchased the entire series, which currently hangs on the walls of his home, Rossogolla Bhavan. With 25 of the artist’s original paintings, the residence houses the artist’s largest private collection. Individual Ramayana episodes have also been created by Jamini Roy, some of which are displayed at places like the National Art Gallery.

Bride with two companions – This painting, which was completed in 1952, is notable for its magnificent Bengal indigo. Every feature of this painting, according to critics, has a meaning and a cause.

Krishna Balaram – In this picture, Lord Krishna is seen with his brother Balarama. Roy had employed earthy tones over a magnificent red background.

Radha Krishna Series Roy painted a series of paintings representing Radha and Krishna’s colourful lives. Along with his other Gopis, he depicted Krishna’s life.

Now the paintings of Kalighat are on display all throughout the world, from Britain to Philadelphia. It is a global testimony to one of the most famous modern Indian art styles. In the production of stylish ethnic Indian clothes, it is also used as an art form for a more modern motif. This type of art has inspired Indian designers to produce some of the most unique themes ever seen in a saree. However, this has played a major part in broadening and bringing the reception to younger people whose interest is more in distinctive fashion than in modern art forms.