Kashmiri Aloo Dum: From Kashmiri Kitchen to the Other Parts 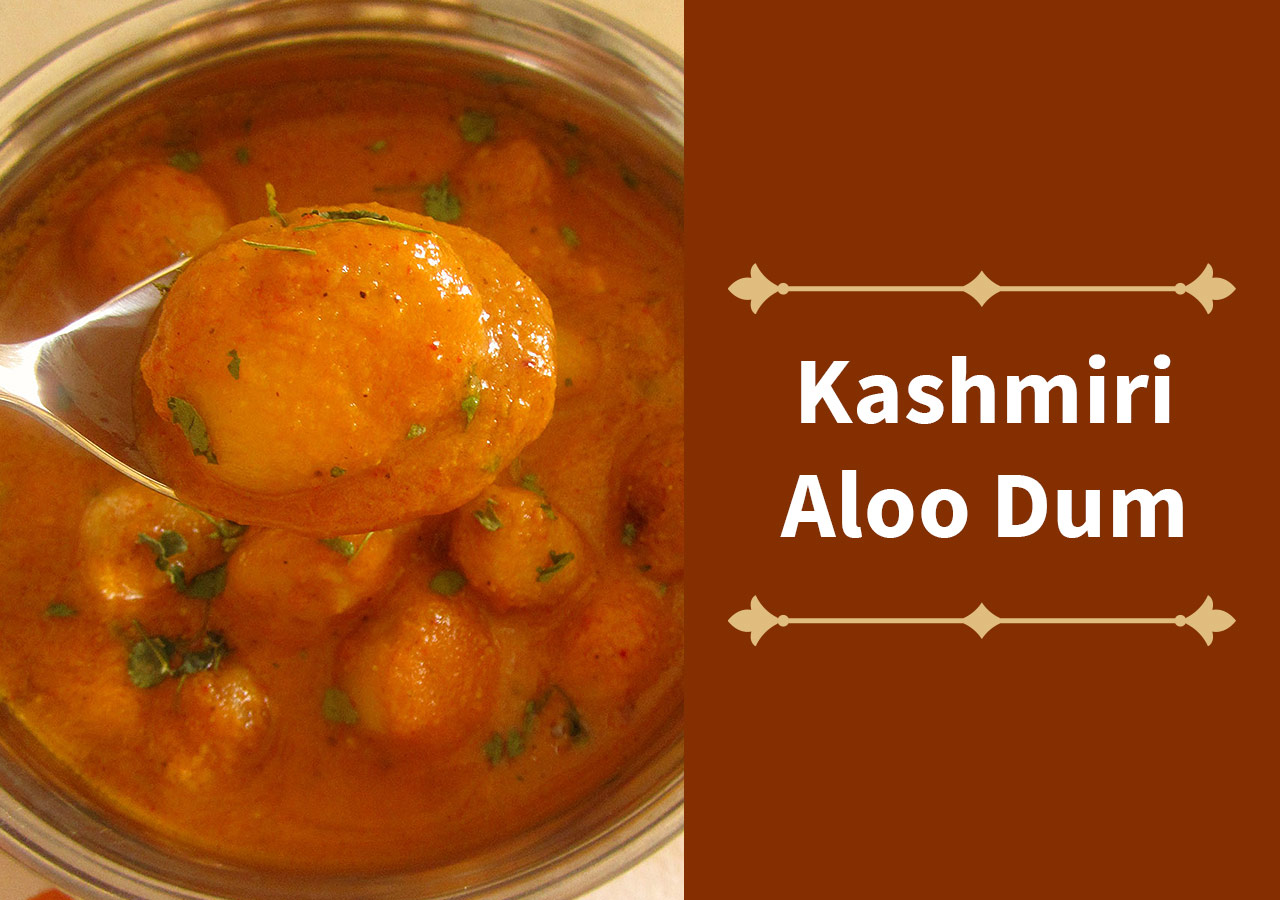 Are you a foodie too? Well, you clicked on the right page then! Answer honestly, which dish comes to your mind when I say ‘Baby Potatoes’? Most of you would answer ‘Dum Aloo.’ Well, that’s what we have on the platter for you today. Baby potatoes are not very popular in the Indian kitchen, and the best use one can put them in is Aloo dum dish. These tin root vegetables showcase their heavenly taste and texture in this dish. In addition to it, the thick hot gravy of Kashmiri Aloo Dum makes it even better.

Wear your apron and pick up your spoon because we are diving into the taste of the world-famous ‘Kashmiri Aloo Dum.’

Aloo Dum, the name suggests the use of potatoes and steam to cook the Kashmiri dish. The Indian dish, Dum Aloo, traces its origin from Kashmir.

Aloo or potatoes became a part of the diet of Homo sapiens about 7000 to 10,000 years ago. It became an essential part of the diet of various countries and regions of the world. First domesticated in Peru, South America, it traveled to India, and today, India is one of the largest producers of potatoes.

The advent of Portuguese and British ‘trade’ in India introduced vegetables such as potatoes (also known as batata or Alu) in the subcontinent. Following this, by the 18th century, the northern hilly regions of India began cultivating the vegetable. Potatoes soon became the all-rounder vegetable in the country; people started including curry, fried, steamed potato recipes in their regional cuisines.

The Kashmiri cuisine lays an inherent focus on meat dishes. The region has very few original vegetarian recipes, and Kashmiri Aloo Dum is one of those recipes. Kashmir, nature’s basket of life, incorporated various cuisine cultures into its own.

Our torchbearer, Kashmiri Dum Aloo, is also known as Aloo Olav’ in the region. The wazwaans, or the traditional cooks of Kashmir, use fragrant and hot spices in the recipe. This brings out the unique taste of the dish, which you cannot find in other parts of the country.

It is one of the simplest dishes to suit your taste buds. However, this simple dish has a lot of steps, and approximately the cooking time is one hour forty minutes. You need only the main ingredient- baby potatoes to make this mouth-watering dish. The main ingredient you need is the chef’s magic- love, and it takes love magic to cook a famous dish using only three vegetables.

The cooking process is a prolonged one and needs utmost skill and patience. Many chefs agree that the trickiest part of the cooking process is the boiling process. The cook needs to pay attention to that part. The potatoes are boiled enough to peel off the skin but note that they are not overboiled as they would cause trouble during the subsequent frying step. The second step, frying, also needs attention. The potatoes need proper frying to bring the crisp but should retain softness.

The traditional recipe of the dish involves cooking the dish on low heat in an earthenware vessel or handi. The handi enhances the taste of the dish. Kashmiris also use ginger powder in almost all recipes. Aloo Dum is no exception and stands at the forefront to continue this unique aspect of the kitchen tips of Kashmir. Third, the Deggi Mirch or Kashmiri chili powder gives an enriching color to the dish.

The gravy of the original traditional Aloo Dum uses yogurt or Khoya as the main ingredient and cashew nut paste. The Kashmiri gravy has no place for tomato-onion gravy, famous in other parts of the country. Spices such as red chilies, garlic, ginger, cardamom, and fennel, completes the taste.

The tip given by wazwaans is to prick the potatoes after frying them, which enables them to absorb the gravy, enhancing the flavor.

The recipe of Kashmiri Dum Aloo traveled from its Whenua to Uttar Pradesh. There, a new version of the dish came into existence, known as the U.P Style Dum Aloo. The gravy dish is fondly served with hot puris.

The Bengali story of the spread of taste of Aloo Dum is also famous. Bengal was unfamiliar with the vegetable ‘Aloo’ till the late eighteenth century. The Dutch first introduced potatoes in Bengal in the 1790s. The Bengali aristocracy loved the soft vegetable, and they adopted it as a symbol of superiority. Potato’s popularity grew inland, and the Nanbais of Wajid Ali Shah replaced the traditional ‘modified’ Dum Pukth. Potato replaced the turnips, introduced by Kashmiri cooks to replace beef, in the recipe.

This recipe involves dry steaming potatoes. The original recipe follows the lines of the ancient recipe of Dum Pukht of the Ain-i-Akbari. This version of the dish has a tangy taste of tomatoes.

This is how the Kashmiri Dum Aloo traveled the subcontinent, creating their baby versions with slight variations and enhancement in tastes.

Many cooks nowadays use sugar in the gravy. This step is optional, and the chefs only use it to bring in the sweet-tangy-spicy flavor in the dish. The use of sugar is nowhere mentioned in the traditional style recipe.

Although the original Kashmiri Aloo Dum is a ‘no-garlic no onion’ recipe, the new versions include onion and garlic. The Northern style Dum Aloo is incomplete without the use of onion and garlic.

Many people skip the boiling step and directly fry the potatoes after peeling them, which saves time; however, the real essence of the dish is lost.

There are many other variations and modifications in the recipe introduced by restaurants in different states and chefs over time. Many chefs serve the dish in their style. However, the primary Kashmiri roots of Dum Aloo are still loved and highly appreciated.