The 35th International Book Fair began with much fanfare in the city of Joy, Kolkata on the 26th of January 2011 and will continue till the 6th of February. The inaugural ceremony was graced by Pulitzer Award winning American novelist, Richard Ford, along with Indian writer Atin Bandyopadhyay. It is a huge fair with 550 stalls among which, 200 are dedicated to little magazines. This year’s theme is ‘America’ and a replica of the White House is displayed up to highlight it.

The ‘Kolkata Boi Mela’ (Kolkata Book Fair) is a ‘book lover’s paradise’ which celebrates a festive time when all the big and small publishers from all across the country and abroad descend on the city, to bring the literary community under one roof. The book fair caters to all ages and is a venue of knowledge and information for the bibliophile community including students, writers, artists, painters, journalists, professionals, hobbyists, homemakers and so many others. There is something for everyone here: books, comics, magazines, paintings, posters, DVDs. This fair is not one to be missed; especially if you love collecting books for your library. 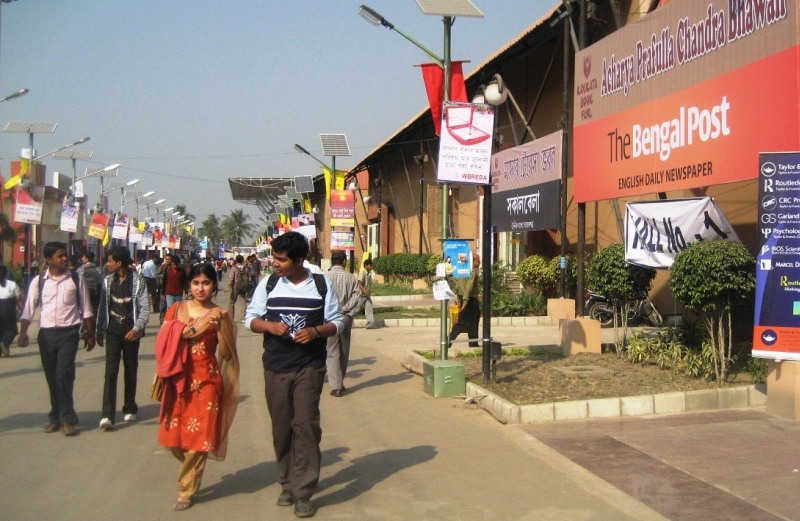 Not only will this pustak mela cater to the palate of the English literature enthusiast, but it also brings to you knowledge about literature from all across the globe. Selected book stalls like Uranita Books from Italy, Indo Latin American Association, books from Panama, Columbia, Peru, the Indo-Hispanic Society (Habitat Academy) display the collection of popular books from their respective countries.

Books by established and new authors are available as translations and original texts, in several languages including Hindi, Bengali, Urdu, Sanskrit, Kannada, Telugu, Tamil, Oriya, Maithili, Gujarati and Nepali. These books cover almost all possible themes including health, education, women, literature, art, history, science, philosophy, religion, self-improvement, sports and lots more. Even a cinema enthusiast can find something for themselves at the stall of Cine Central Calcutta.

At these stalls you can find a selective but wonderful collection of story books, posters, magazines (some in English and some translated into Bengali and Hindi). My eyes fell on some books on ancient Peruvian textiles and culture. After looking around for a while, I noticed something that looked like a ‘mini newspaper’. The stall owners corrected me saying it was a ‘little magazine’. I bought this interesting looking piece, and read it at the stall itself. Here was an intriguing article about a Jewish author called Inca Garcilaso, who translated Leone Ebreo’s work called Dialoghi d’amore and others.

An excerpt from the magazine called Chasqui (Peruvian Mail) that I must share:
“Love, in all its forms, is the divine engine of creation and the link which binds all mankind. In 1950, he published a Spanish Translation of the work in Madrid, signing as “Garcilaso de la Vega.” Faithful to its original text and written in an elegant prose, this translation, “the new fruit of Peru” is still considered authoritative.”
Quite a beautiful thought, isn’t it… coming all the way from Peru.

One of the stalls that caught my eye was an orange-black stall called Rabindra Chitravali. It truly represented the uniqueness of Bangla culture. It stocked paintings of Rabindranath Tagore and also other painters like Abanindranath Tagore, and Judhajit Sengupta. Volumes of plays, stories, and others by Rabindranath Tagore were also available at great prices. ‘Spirituality’ had its own special zone at the fair: Ramakrishna, Vivekananda and Vedanta Literature and stalls from other ashrams across the country were promoting the word of the divine via the essence of books. 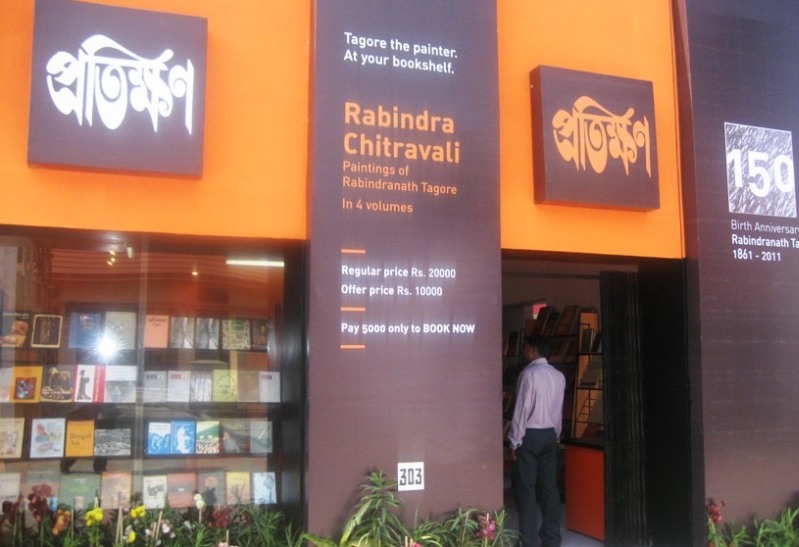 Apart from the stalls, the three main pavilions at the fair were named: Acharya Prafulla Chandra Bhawan, Mother Teresa Bhawan, and Santidev Ghosh Bhawan. The halls included some of the bigger stalls of well known publishers like the Oxford Bookstores, Penguin, Crossword, Jaico, Pustak Mahal, Isha Foundation, Taylor and Francis Group, Times Group Books and Pearson. The rest of the book stalls were out in the maidan, adjacent to the wondrous pavilions.

It seemed like the entire book publisher and reader community had flocked to this unique meeting point and for a book lover, nothing could be more exciting. Personally, I got more than I expected. A sense of nostalgia envelopes me now, not only because I brought back volumes of Rabindranath Tagore’s books from the Boi Mela but also because I discovered several new and amazing authors I had never read before. I am going back there tomorrow again; hope to see you there too.