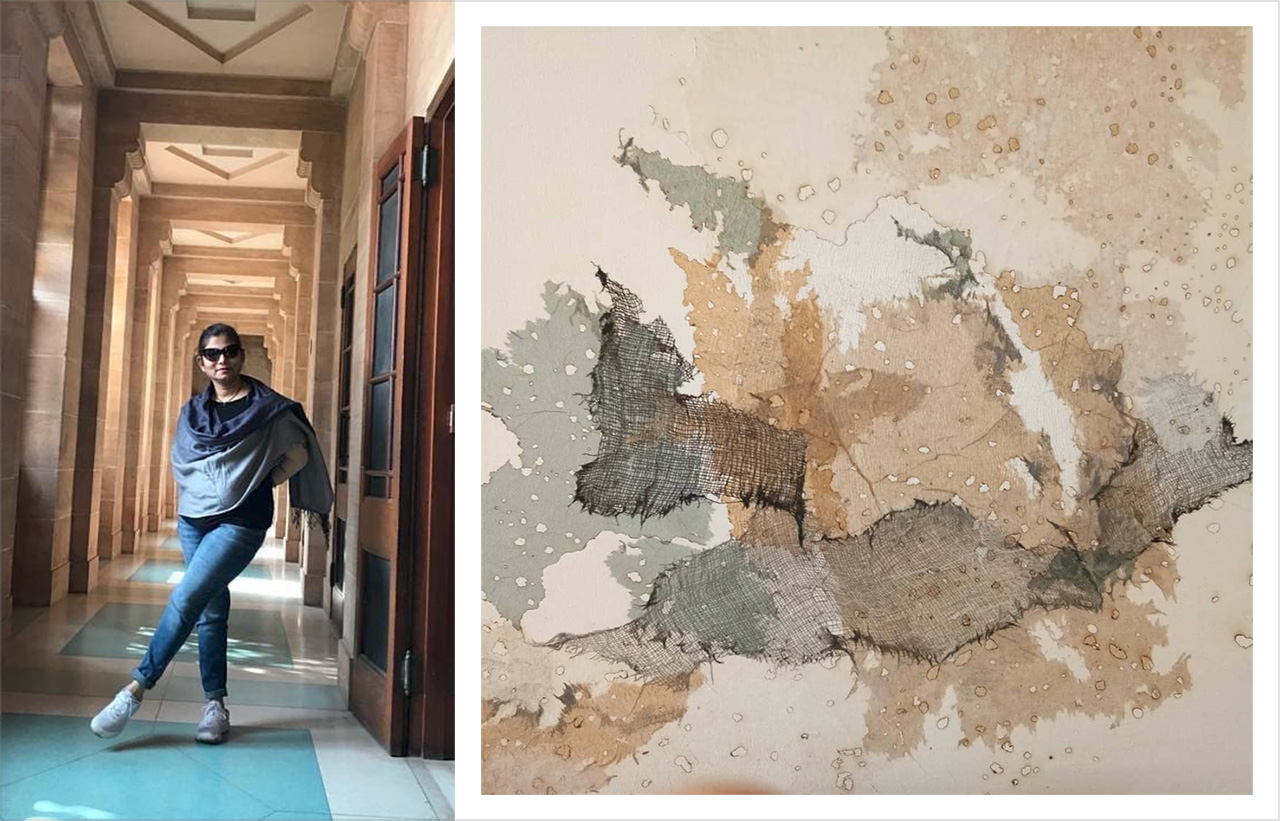 Any work of art, especially visual art, cannot be taken at its face value. One must dwell on matters beyond the immediacy of the complete work and take note of the factors that influenced it, the thought behind the work, the several layers of meaning and association attributed to it, and finally, the genre the artist adheres to. All this is a part of the artistic ethos of abstract art painter Madhuri Kathe, born in Madhya Pradesh, and currently one of the leading exponents in India of this kind of art. Having cultivated an artistic temperament from a very tender age, she has been trained in art, history, and culture, and in fact holds a doctorate in art history studies. A prolific painter, she has won numerous awards including one from Rashtriya Kalidas Samaroha, and has participated in several national and international conferences and art exhibitions (notably at the Busan International Art Fair in South Korea).

Madhuri Kathe has been known for the emphasis that her artworks are not premeditated, but are random and inspired combinations and play of colours. She has previously stated that her works are reflective of an unconscious deep rooted philosophy that has developed from her readings of the doctrines of Lord Vithala, Sant Dyaneshwar, and Sant Tukaram. There is thus a very characteristic spiritual aspect to her artistic sensibility. Her artistic and spiritual senses are inextricably linked together, and this is what urged her to move away from figurative works to an abstract style. The unpredictability and fluidity of her strokes can also be attributed to motions of a greater cosmic power. The lack of deliberation is apparent in the spontaneity of her creations, as Kathe has always stressed on the necessity of an appropriate mood and setting as the impetus to paint. 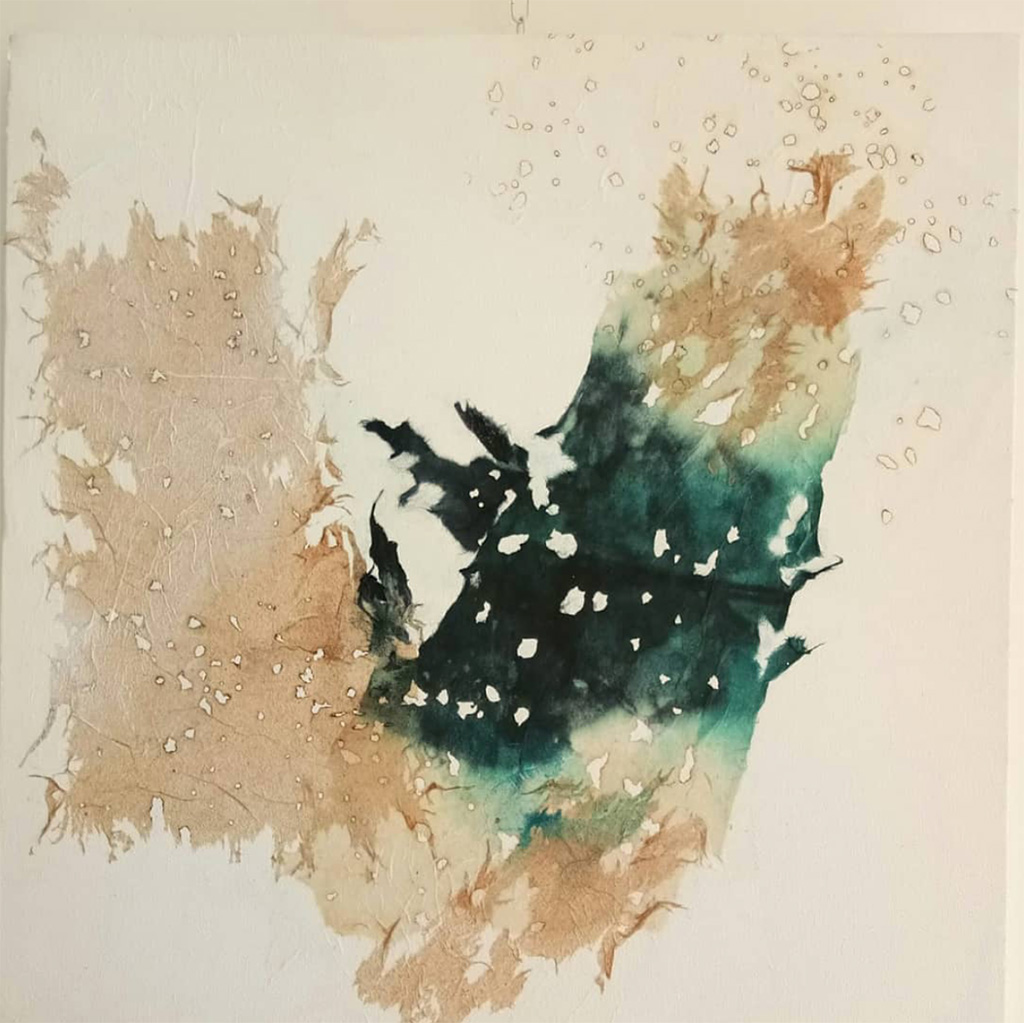 Her specialty lies in mixed media abstract painting, in the realm of the interplay between the natural and the human worlds. Highly unusual and unique tools are what make her paintings stand out – such as the use of the medical gauze. Typically modern methods are her forte, as is the deconstruction of materials to create an organic effect of layers of canvas fabric and paint to create a stunning visual and abstract effect. There is a strong use of symbolism that lends to the mysterious, spiritual tone of her works. The paintings collectively reflect powerful emotions and views on contemporary existence and the life of the soul. A “spiritual exploration” of her own life combined with shapes and forms in nature give credence to her finished artworks.

Her passion spills over onto the canvas in abstract forms and shapes, often without a particular direction in mind at the time of the creation. Texture is an important element in all of her works, which acts as a mediating point between two colours, determining how the mixtures are going to stand out on the canvas. While medical gauze features regularly in her painting studios for its unique mesh effect, other materials used frequently include tissues, handmade paper (primarily the Korean kind). Each painting has a delicate balance as several materials are used to bring out a unique texture, and there is no one set pattern that is followed. The materials are artistically ruptured before use, sometimes with its edges burnt off or simply torn by hand. 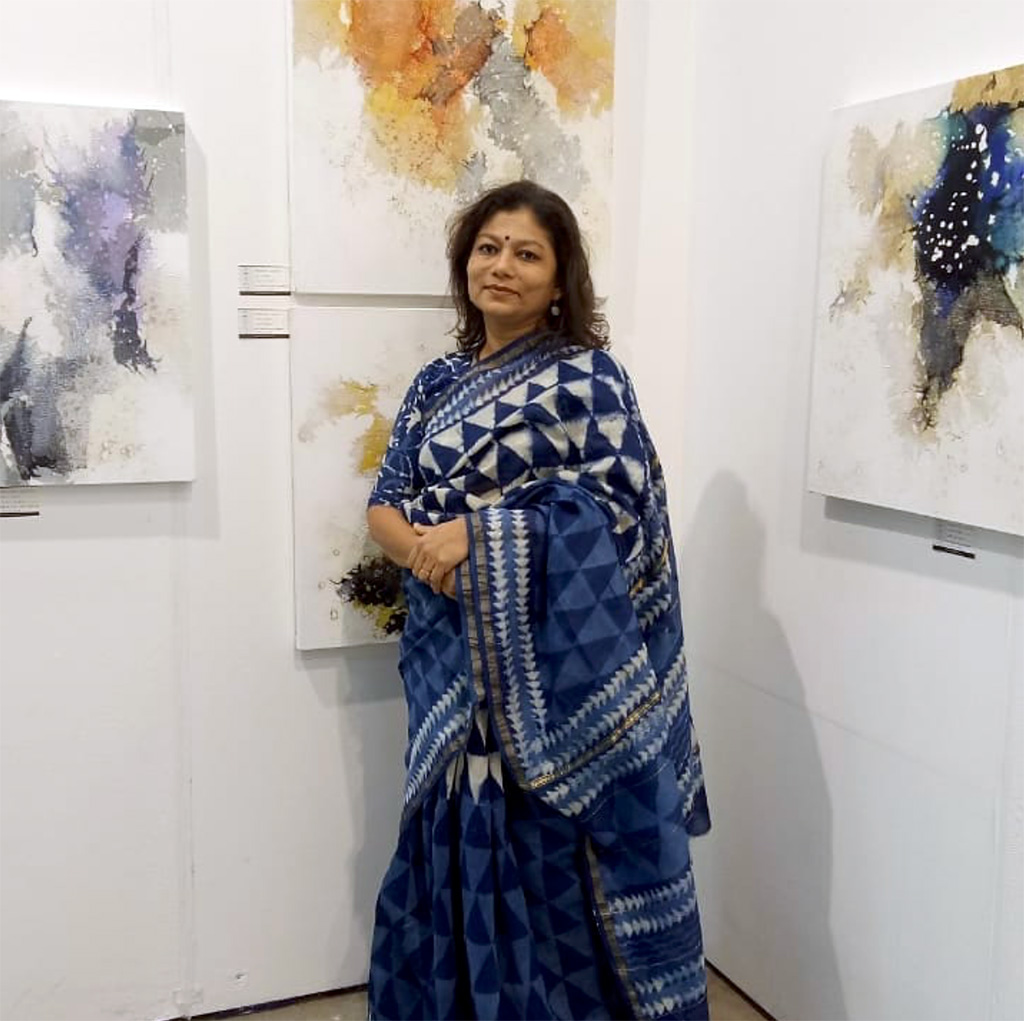 The painter firmly believes that each work of art is reflective of a deeper truth, or the motions of the cosmos are evident in it. As an artist the only goal she sets for herself is to make her audience feel the same emotions and convey the exact thought that lies behind the conception of the work. Hence, most of the process of creation is internalized and it the final painting is only the last stage of such contemplation. Since her work is deeply attached to the rhythms of the universe, the paintings are mainly inspired from plants and natural colours. The colours used by her are all fluid, typically earthy hues that are found in abundance in the natural world, such as shades of blue, pale gray or yellow, and deeper ochres. Usually steely or metallic colours are notably absent. Madhuri Kathe’s serene perspective on life and her philosophical beliefs have impacted her style greatly. Herself referring to such influences, she has termed her motto as that of ‘nirankar’, or a belief in formlessness. It is thus of no surprise that abstract art is her preferred mode of painting.