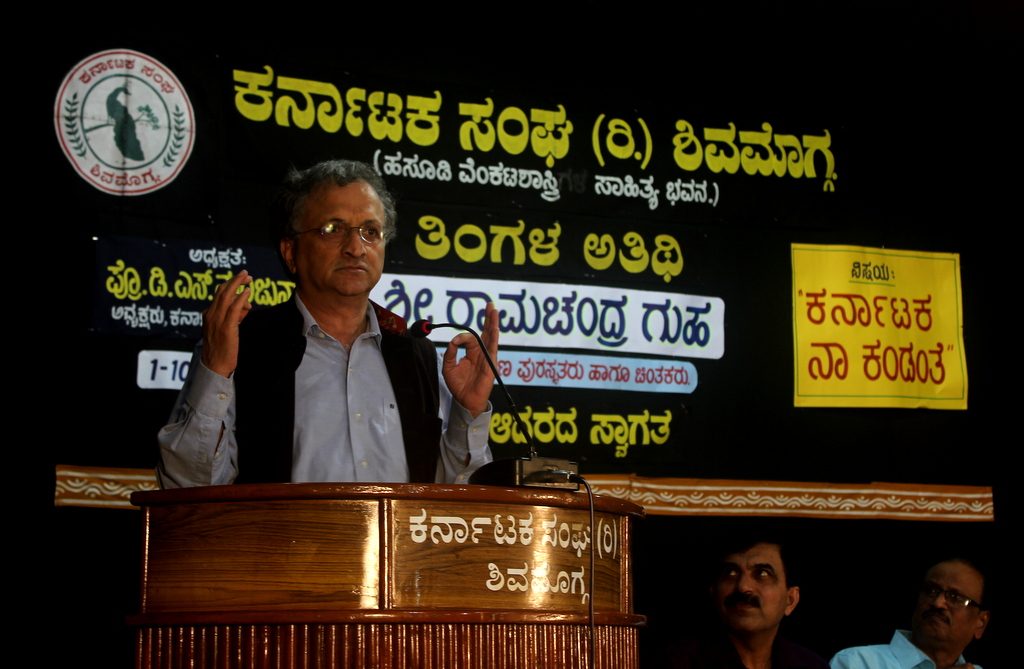 I was fortunate enough to hear the renowned historian Ramachandra Guha at a talk show organised by Karnataka Sangha in my hometown, Shivamogga. In his talk “Karnataka Naa Kandathe”, he spoke fondly about his nostalgic memories of coming to the state as a young boy and later residing in Bengaluru. Rather than give you my version of his thoughts, I would rather quote him verbatim (edited).

“Way back in 1960s, I used to come regularly to the state of Karnataka every summer to stay with grandparents. My first identification with Karnataka in the 1970s was through cricket. Although I resided in Dehradun, which was part of Uttar Pradesh, I became a big fan of the Mysore cricket team that played in the Ranji Trophy, which had three national players in it: EAS Prasanna, B S Chandrashekar and V Subramanya. That was an era of test matches happening once every two-three years. That was an era of Ranji Trophy matches when 20,000 people turned up to watch 3-day matches.

I was a witness to the match in Chinnaswamy Stadium when Karnataka cricket team beat Bombay for the first time in the semi-final of 1973-74 Ranji Trophy season. Bombay (later Mumbai cricket team which is different from the Maharashtra cricket team!) was a formidable cricket team winning 20 out of 22 titles, including 15 in a row from 1958 to 1973.  G R Vishwanath, my hero, walked in at one down after the opener Vijaykumar had departed quickly and the score was 0/1. Vishwanath was plumb LBW in front of the very first ball he faced, but the umpire ruled him not out and he then went on to score 162, along with Brijesh Patel who scored 100.

There was another miracle when Ajit Wadekar slipped and was run out. These two miracles set up the first ever victory for Karnataka against Bombay. The Bengali umpire, Ganguly, who gave Viswanath not out later went to Kolkata and boasted to Bengal cricketers at Eden Gardens, “I have done something you guys couldn’t do all these years, made sure Bombay didn’t win the Ranji Trophy!” After Karnataka defeated Bombay for the first time, every other Ranji Trophy team got the courage to beat this formidable team.

As a cricket lover, there was something about the quality of Karnataka cricketers that appealed to me: their fair play, their gentleman behaviour and their integrity. Not a single Karnataka cricketer was ever implicated in match fixing. I once wrote, “I don’t care if India wins or loses as long as Rahul Dravid gets runs and Anil Kumble gets wickets”. Rajdeep Sardesai once quipped “Guha’s excessive love for Karnataka team might cause another Cauvery dispute!”

Later my connection with the state was during my PhD study on Chipko movement and environmental movements across India. During 1980s, I travelled extensively across Karnataka and was closely associated with several environmental groups such as Samaj Parivartan Samudaya, Sahyadri Parisaravardini, CANE – Campaign for Alternatives To Nuclear Energy, etc. In those days fortunately, there were great leaders in Karnataka like Ramakrishna Hegde, who put scientists in charge of creating environmental policies.

During those days, I happened to interact with Shivarama Karanth who was fighting against for whom I have enormous respect. He was a multi-faceted personality who had 16 careers: a novelist, a playwright, a social reformer, an environmentalist, a politician, etc., and his autobiography is evidently called “Ten Faces of a Crazy Mind”.

In 1995, moved to Bangalore and became the permanent resident of this state and have had the great privilege of interacting with some great personalities, two of whom were literary stalwarts – U. R. Anantha Murthy and Girish Karnad. Particularly, I had great interactions with Anantha Murthy since he loved to debate with people younger than him. I have argued with him about Nehru, Lohia, and socialism. While we argued on many issues, our disagreement never led to hatred for each other. Recently, when Gauri Lankesh was killed, I went to meet Girish Karnad since she was a great friend to both of us. I said it is sad we are meeting now in a world that is no more conducting debates through arguments but rather through violence.

While Karnad and Anantha Murthy are big names in Kannada literature, I interacted with another little known writer, D R Nagaraj. We would regularly meet in Koshy’s café in Bangalore and discuss various issues. Nagaraj wrote a book “Flaming Feet”, which is a superb study on the Gandhi-Ambedkar debate on the issue of caste system and untouchability. Talking about this most important contemporary debate in Indian society, he felt that we can appreciate both of their views on Dalit emancipation and can find an underlying unity. He died suddenly in his 40s and I am still unable to overcome his death, whom I feel is the most influential cultural thinker emerging from this state.

The most remarkable aspect of the literary world of Karnataka is its linguistic diversity. Among the four remarkable writers in Kannada three did not even grow up speaking that language. D. R. Bendre’s mother tongue was Marathi; Masti Venkateswara Iyengar’s first language was Tamil; Girish Karnad spoke Konkani, while Shivarama Karanth most likely spoke Tulu and D R Nagaraj spoke telugu. Interestingly, of the four authentically ‘Kannadiga’ Jnanapith award winners, two, V. K. Gokak and U. R. Anantha Murthy, were by profession teachers of English!

India is the most ethnically, geographically and culturally diverse country in the world and Karnataka the most diverse state in India. If you travel from Bengaluru to Mysuru to Udupi, you will come across the historical temples in Somanathapura, dargahs in Srirangapatna, Buddhist stupas in Kodagu, Jain basadis in Mangaluru, temples in Udupi and their believers living in harmony. This is the thought I would like leave you with – Karnataka is a state that blessed with diversity.”

Factfile –
Image sources –
http://ramachandraguha.in
http://www.thehindubusinessline.com
K T Athaiah from coorg was a food historian who wrote books on the history of Indian food

Molakalmuru Saree: A Traditional Beauty Made in Karnataka!