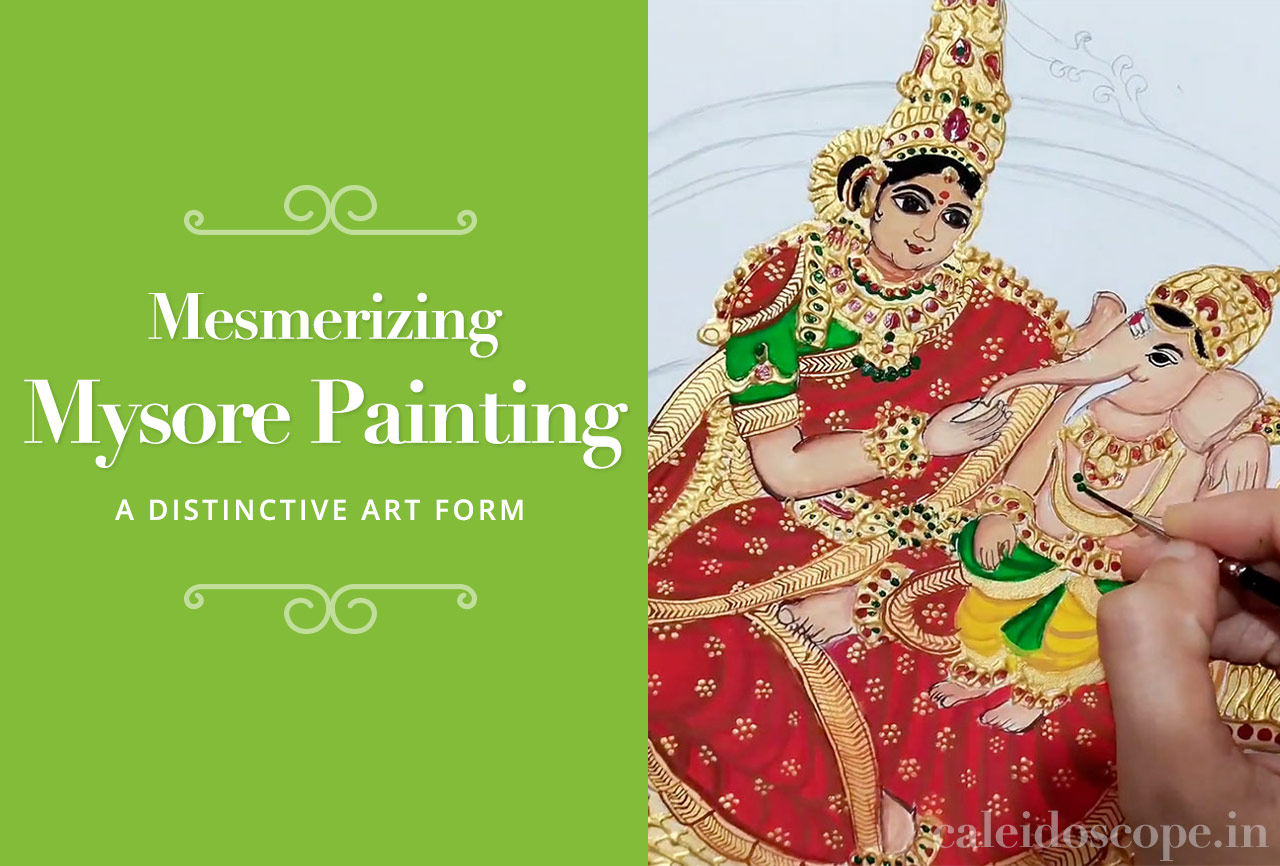 The Mysore paintings, as the name suggests, developed specifically in and around the Mysore town in Karnataka. Karnataka itself has a rich history of cultural arts that goes back to the Ajanta times or from the 2nd century BC to the 7th century AD. The Mysore paintings can find their origin in the paintings from the Vijayanagar Empire. The kings of Vijayanagar were in favor of the arts, however, with the fall of the Empire in the Battle of Talikota, the artists of the area scattered and took refuge in various places, such as Mysore, Surpur, Tanjore, etc. These artists then incorporated the local culture and references of these regions into their art to create distinct traditional art forms, such as the Mysore paintings and Tanjore paintings.

The evolution of Mysore painting

The Mysore paintings found patronage under Raja Wodeyar who took it upon himself to rehabilitate the artists and painters after the fall of the Vijayanagar Empire. His successors continued to encourage the art form by commissioning the artists to paint in palaces and temples. Sadly, none of these paintings have survived, both due to the destruction by the British and Hyder Ali and Tipu Sultan. However, during their reign, the artists also called chitrakars continued to create their paintings. An example of this can be seen in the Narasimha Swamy temple between Tumkur and Sira, built by a serviceman of Hyder Ali and Tipu Sultan, named Nallappa. Another example of the Mysore paintings is the paintings and murals at the palace of Tipu Sultan, the Daria Daulat Bagh.

After the demise of Tipu Sultan, the Wodeyars of Mysore were established as rulers again of the region. Muhammadi Krishnaraja Wodeyar in the late 18th and early 19th centuries brought in a new era of development for the Mysore paintings. Most of the paintings that have survived today are from this era. It is also during his time that a complete documented know-how of the Mysore paintings, called Sritattvanidhi, a manuscript of 1500 pages with illustrations and instructions was prepared. Today Sritattvanidhi is one of the most important learning tools for artists. The Mysore paintings that one can see today from this period are found in the Jagan Mohan Palace in Mysore. These paintings include rulers of Mysore, important personalities in history, self-portraits, and Hindu mythology.

Process and method of Mysore painting

The Mysore paintings are created carefully through a thorough and robust method. First, the canvas or the base is prepared. Earlier it used to be either wood, paper, cloth, or the ground. If it was made from the pulp of paper it was dried and then polished with quartz. If it was cloth, it was laid on a wooden board using a paste of gruel, gum, and dry white lead. Later artists would use layers of newspaper and paste a drawing sheet on top of them. The sheet was then covered with maida or refined flour. Today, however, cartridge sheets or mount cardboards are used as a base.

Once the base is prepared, a sketch is drawn. Earlier the sketches were made using twigs from the tamarind tree. Next, the objects in the sketch that were furthest away or not the main focus of the painting, such as the sky, river, hills, animals, etc. were painted. After painting these, the attention shifted to the main characters in the painting, with the detailing of the faces, ornaments, dresses, etc. It is also during this stage that the gesso work or gold covering is added to the painting.

One of the most distinct characteristics of the Mysore paintings is the gesso or gold work on them. Gesso is a mixture of gambose, powdered white lead, and glue on which gold foil is pasted. Gesso work is used to highlight jewelry, clothing, intricate designs, and details either on dresses or architectural objects, such as arches and pillars. For Mysore paintings, the gesso work is not too elevated or thick as seen in Tanjore paintings. This is perhaps the most marked difference between these two traditional, classical paintings from southern India.

The gesso paste made from Arabic gum and zinc oxide is first applied to give it a slight elevation. The gold foil is then pasted on this surface. The gesso work is usually done in the morning so that after the gold foil is laid, it is left to dry for 6 to 8 hours. The excess gold is then removed using a brush or cotton.

Since the gold foil is quite expensive, the excess is removed and reused in the next painting.

The basic colors are used in Mysore paintings. Initially, the colors were made from natural ingredients, such as vegetable extracts, flower extracts, etc. Today, of course, artificial colors and sometimes even acrylic are also used. Once the painting is complete with the colors and gesso work, and fully dried, a thin paper is used to cover it. A soft stone known as kalupada kullu is rubbed on the painting so that when the paper is removed, the painting acquires a glaze and shine that looks stunning with the goldwork.

Some of the different types of Mysore paintings include:

Themes and subjects of Mysore painting

The Mysore style paintings are paintings of Gods, Goddesses, and mythological figures. Some of the most common Gods that are painted are Goddess Rajarajeshwari, Dashavathara, Kodandarama, Chamundeshwari, Saraswati, Lakshmi, Shiv-Parvathi, etc. In the 19th century paintings of the royal family and kings were also painted. Heroes from epics, as well as real-life models, are also painted.

The figures that are painted in Mysore paintings have a few common characteristics. For example, the eyes are fish-shaped, there is a protruded round chin, and the hairstyle, jewelry, and dresses are based on the traditional attire and features of Mysore. The architectural backdrops are also mostly those for the Mysore palaces and the Gods and Goddess’s feet are placed on flowers as a mark of respect.

The artists of Mysore painting

Some of the famous artists of the Mysore paintings are Sri K.S Shreehari whose ‘Virata Vishwaroopa’ and ‘Panchanaari-Turuga’ are some of his famous works. M. Ram Narsaiah is known for his many paintings on the royal family of Mysore. His paintings also depict the culture, traditions, and society of Mysore.

Chandrika, daughter of M. Ram Narsaiah continues to carry his legacy forward and works with different mediums of oil, acrylic, and paints.

Some of the other renowned Mysore artists include Mr. Anand, B.P Ramakrishna, R.G Singh, and more.

Mysore paintings are classical Indian paintings that are unique and specific to the region they come from. Just like the many other traditional painting and art forms of India, the Mysore paintings are also a manifestation of the rich cultural and artistic heritage of this nation.