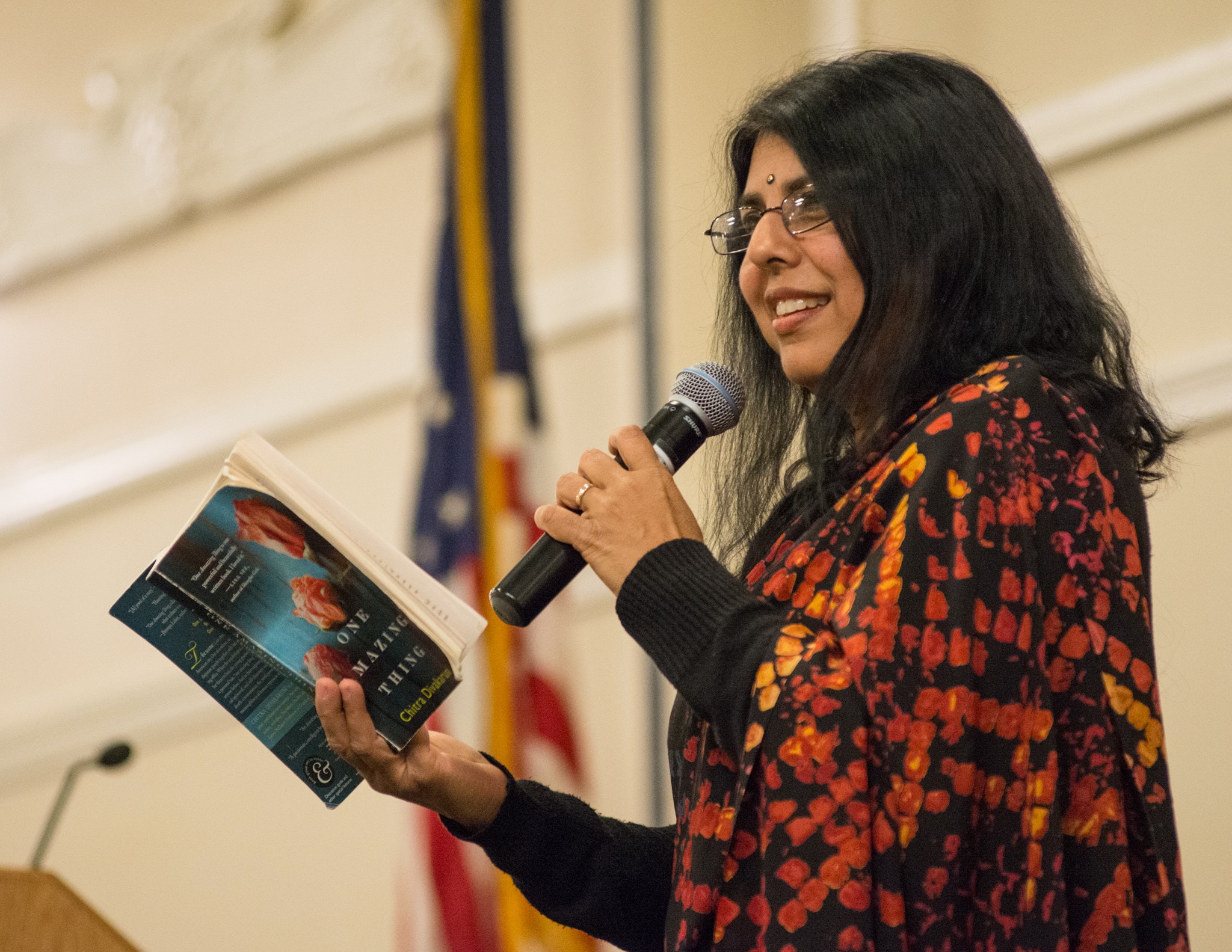 One fine day in February, I was enthralled to see Dr. Chitra Banerjee Divakaruni, an award winning Indian American author. She was at the Starmark (South City Mall) in Kolkata, celebrating and sharing her success with her readers during the launch of her latest books: Shadowland and One Amazing Thing.

Chitra Banerjee is best known for her novels such as The Mistress of Spices, The Palace of Illusions, The Vine of Desire, Sister of My Heart, The Unknown Errors of Our Lives, Arranged Marriage, Black Candle and Queen of Dreams. She has also written books for children namely, The Conch Bearer, Shadowland and Neela: Victory song. Her novel ‘The Mistress of Spices’ was made into a movie starring Aishwarya Rai, and ‘The Vine of Desire’ was turned into a televised serial. She has achieved so much success because there is something sublime, real and poetic about her writing. This review on one of her books ‘Sister of my Heart’ will shed light on the brilliance of her writing.

“Divakaruni’s talent and originality lie in her ability to discern [the] basic emotional motifs beneath the flashy ‘exotica’ of Indian, and American, lifestyles. She finds the real points of departure between the two cultures, and in putting her finger exactly there, activates the universal.” — LA Weekly.

Coming back to the book launch, Debnita Chakrabarty,the English department head at the Shri Shikshayatan College, was in conversation with the author. The atmosphere there was both electric and serene. After Chitra Banerjee read out a few passages from some of her popular novels, she interacted with Debnita and the audience, which included some of her ardent fans from all age groups, including little children, and also her family and friends from Kolkata. The audience asked her if there was any book of hers that she would ever redo. The lovely author said that she loved everything she has written so far, and in fact, whenever she goes back to some of her previous work, she falls back in love with it. I did not expect any other answer from Chitra Banerjee, because her optimism and zest for life are unmatchable, and can be felt in her work, and that is what makes her such a loved author, worldwide.

Chitra Banerjee also told us that ‘One Amazing Thing’ has been written in a minimalistic style which is in contrast to her usual elaborate style of writing. And to me and her fans, it is just as effective and beautiful. She also said that she has come a long way since her college days in Calcutta, because moving to the US in 1976 changed a lot of things for her. She spoke about some of her initial experiences in America, and how she had to work her way up to become the successful author that she is today. That is also why she writes so eloquently about the immigrant experience and the Indian Diaspora, which touches our hearts so evocatively.

The lyrical author also told us that her two sons are her inspiration for Shadowland. She said that there is a bit of myth, magic, and folk tales in the books she has written for children. She believes that research for a writer is very important, as well as creativity and hard work. The Palace of Illusions is her most successful book so far. It is based on the epic ‘Mahabharata’. She revealed that she had read several versions of the Mahabharata and researched various facets of this epic before writing the story from the point of view of ‘Panchaali’ (Draupadi). She wanted to portray the beauty of the epic through the eyes of a strong and feisty woman like Draupadi. Here is how Los Angeles Times has reviewed the book.

“The Palace of Illusions by Chitra Banerjee Divakaruni is as sprawling and bright a gem as the Hope Diamond – a mythic tale brimming with warriors, magic and treachery (and its brother, deceit)…. Who better to attempt the feat of transforming a centuries-old cultural icon into a personal, modern story than Divakaruni, a professor of English at the University of Houston and author of numerous award-winning works, including the luscious novel The Mistress of Spices and the bestselling Sister of my Heart. Divakaruni’s sentences dazzle; the images she creates are masterful….”

On being asked about Rabindranath Tagore, the exuberant author said that she was lucky to have read his work in Bangla as well as in English, and that he was a great source of inspiration for her. Towards the end of the interaction, she asked the audience if they would like her to write about Ramayana from the point of view of Sita in the future. As expected, everyone in the audience agreed. She also told us that her next creative project was called “Oleander Girl”, which was about the search of a young girl for her American father.