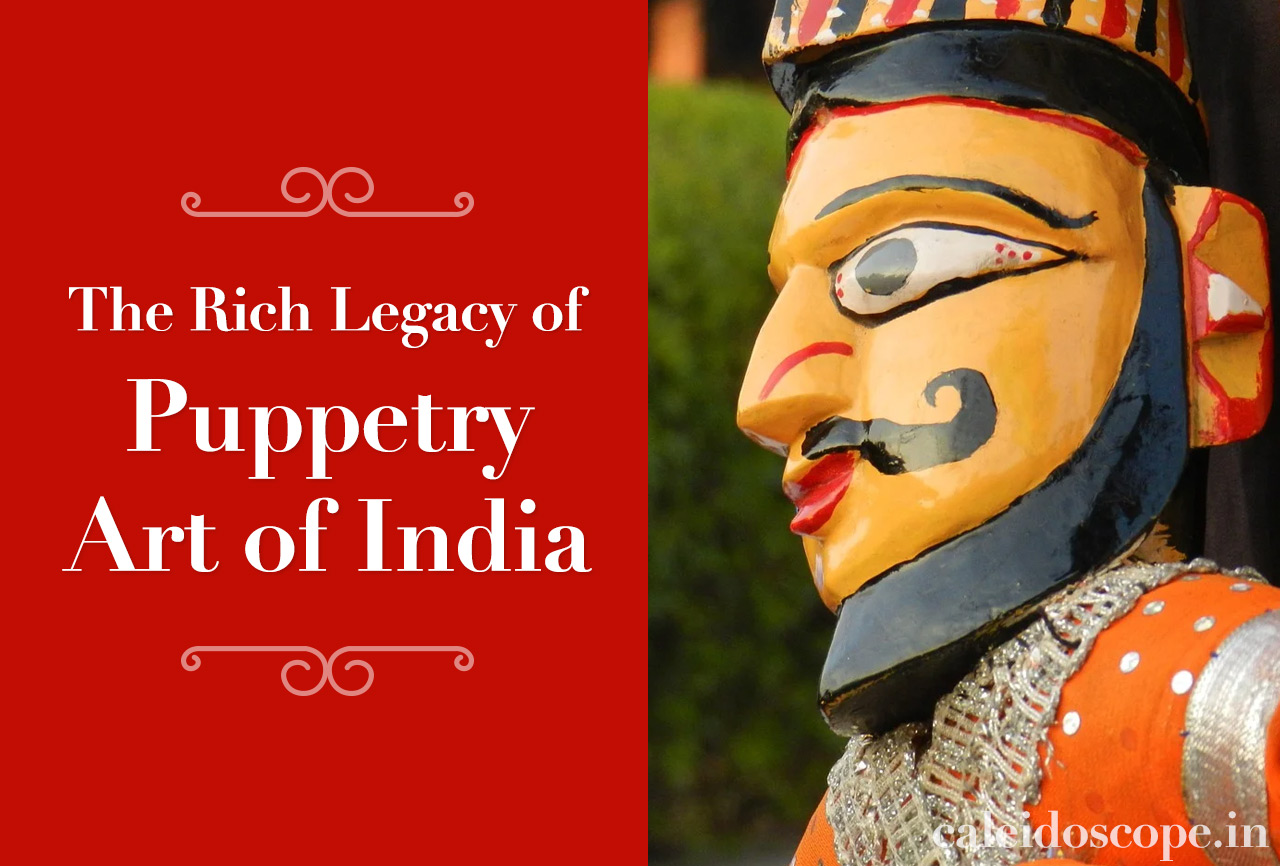 Puppetry is a fascinating art form that has always sparked curiosity from an audience of all ages. Contemplating the life sagas of great monarchs and heroes of this type in rural India is quite popular. Emerging from the grassroots level, the identification of puppetry in India varies from one location to the other. Over the years, a fusion of regional painting techniques and sculptures has become more holistic. But it’s a dying art, unfortunately. Puppetry has grown less respected and less well-known with other types of easily accessible entertainment. Knowledge of these old forms is generally confined to a small group, and if it is to be popularised again we must try to make it more accessible for the masses.

India’s puppetry tradition forms an integral part of the culture of performance in the country. Puppetry shows include the representation of graphic stories utilising puppets, live music, gestures and narratives. They’re therefore at the intersection of theatrics and storytelling. It has mostly been done at religious events, ceremonies and temple celebrations.

Beginnings of the tradition cannot be accurately located. There is nevertheless a narrative that says that Brahma the creator gave life to Adi, the first nat puppeteer who constructed his fellow goddess, Saraswati, the first puppet for enjoyment. Brahma was not content with his job and expelled the puppeteer to earth, starting the line of nat bhatt puppeteers. The oldest mention of puppetry was made in the Mahabharata in 9th century B.C.E., according to literary sources. Panini’s grammar(4th-century B.C.E), Patanjali’s works  (2nd-century B.C.E), are the other literary sources. Certain academics contend furthermore that puppetry arose even before theatre. The puppets show gods and heroic figures through epic poetry, theatrics and story-telling. They fulfil educational and entertainment functions. It was present throughout India as a popular medium of performance. There is a variety of puppetry traditions in India.

The various styles and types of Puppetry

Puppets come in many shapes and forms, as with everything else in India. The backbone of the craftsmanship is glove, shadow, rod and string puppetry although styles differ in the country from region to state. The puppets are virtually life-sized in the northern state of Bihar, they weigh up to 10 kilos in Bengal, but they are paper-thin in Karnataka and Andhra Pradesh. They are manufactured from wood in Rajasthan, from leather in Tamil Nadu, from terracotta in Bengal and from wood in Odisha.

Geographies, language, music and culture, together with hyper-local demographic choices, have an important part in determining types of puppetry. In spite of the distinctions, they may be tied to a similar topic – religion. The most popular narratives told using puppetry are Ramayana, Mahabharata and the Puranas. Native language, regional context and local accent ensure that stories continue to be relevant to the audience and the message is properly transmitted.

String puppetry remains the most frequent type of puppetry in India. It is also the most expressive with the use of cords tied to the limbs and head of the puppet. The cords are tugged from behind the screen by the Sutradhar and the dolls dance and follow his orders. The more strings the more difficult and intricate is the performance. Different variants of this form may be found throughout the country.

For example, in Rajasthan, string puppets are ornamented with tinsel and named kathputli. In tourist squares, both local residents and visitors can observe them dance to native music. They are named Putul in West Bengal where they recount local stories of Durga’s courage; most of them are found at exhibitions, festivals and in rural areas. The technique they use is called suter putul nach. Odisha utilises string puppets, gopalila kundhei, for portraying the narrative of Lord Krishna, and in Maharashtra, known as Kalasutri Bahulya, the episodes of Ramayana are depicted with cymbals and drums on the stage. Separate variants of the stringed puppets are also available in Karnataka (yakshagana gombeyaata), Kerala (nook pavakoothu), Andhra Pradesh (koyya bommalata) and Telangana (keelu bommalata and  sutram bommalata) and in Tamilnadu (bommalattam)

Two-dimensional and flat puppets make the most fascinating form of puppetry – the shadow puppetry. These puppets are often made from animal leather, first processed and later painted with natural colours and with traditional motifs, and depict the most popular legends like Ravana, Rama, Surpanakha, and Mahabharata.

In the southern states Shadow puppets are more popular; their styles are very similar but subtle. Some of these are constructed with one enormous piece of leather, like the Togalu Gombeyatta in Karnataka. Some are joined like the one in Maharashtra. The joints enable the puppet to move more quickly and more gracefully and to be agile. Large groups of men and women sing traditional folk tunes to the beats of mridangam and cymbal as the Sutradhar brings the stories live on the stage. Tholu Bommalata puppets performed in Andhra Pradesh and Telangana, are recognised for their powerful performances, most of them performed after darkness with the sound, light, and visuals working together to create a fascinating ambience. Odisha’s shadow puppets are smaller and made of deerskin; and mountains, carts and trees play a vital part of the plot and the scenes from these epics come to life with realistic visuals and lyrical shadows.

The ideal demonstration of how a mute limp doll may spring to life with the small movement of the hand is what glove puppets show perfectly. Used in Uttar Pradesh, Kerala, Odisha and Bengal, a simple approach is employed: a puppeteer places his hands into the head and arms of the puppet, manipulating the entire scenario. Uttar Pradesh’s Gulabo-Sitabo puppets mainly play social subjects in a fun and comedic style; they tell the story of Radha and Krishna in Odisha; however, Kerala’s glove puppets are the most captivating. These enormous, kathakali-like dolls, Pavakoothu, feature intricately wooden faces and garments in the fabric between one to two feet in height. Like Kathakali, the stories from both epics and dance to the enjoyable music of the chenda, chengiloa, ilathalam and shankha are also depicted. The performance of Pavakoothu is often as fascinating as the performance of Kathakali.

An extension for the glove puppet – the rod puppet are sometimes much larger than their hands and are manoeuvred by a rod. The most notable forms of these are Bengal Putul Nach and Bihar Yampuri. In Bihar, the puppets in one piece are made of wood. The movement needs higher skill on the part of the puppeteer, since there are no joints.

The rod puppet of Bengal is made of giant dolls and their stories and styles are borrowed from the traditional theatre, Jatra. They’re very dramatic and theatrical. They have a bamboo rod attached to the waist, manufactured in elaborate consumes, dazzling headpieces and typical Bengali Mask styles. The puppeteers stands behind a high curtain, singing and dancing while the puppets are being manoeuvred by them. There’s a festive atmosphere around the musical ensembles who accompany this performance, playing rhythmic local tunes about harmoniums, drums and cymbals.

Suresh Dutta is an Indian puppeteer, an eminent personality in the theatre and founder of the Calcutta Puppet Theatre, situated in Kolkata. Dutta  was born in Faridpur in 1934 in the then undivided Bengal of British India. He graduated from the Albert League Temple Art School and the College, where he studied dance, play and music. Also Dutta trained in Jatra and Kathakali under Balakrishna Menon and Phani Bhushan.He also learned Bharatanatyam and Manipuri. He stood in his parala puppetry at the Calcutta Children’s Small Theatre in 1954 and made numerous shows with puppets, Mithuya in 1955 and Dustu Indur (Naughty Mouse) in 1956. He then proceeded to Russia in 1962 to train with Sergey Obraztsov, the master of puppetry, under a scholarship. He continued with the Little Children’s Theatre until 1971 when he returned.

In 1973, together with his wife Devi and a few similar artists, he established his own  puppet theatre group, the Calcutta Puppet Theatre. The stage shows performances beginning with the Aladdin, followed by Ramayana , Sita, Gulabo aur Sitabo and natun Jeebon, raining to over 3000 shows. In 1978 he was awarded the Sangeet Natak Akademi Award. For his contribution to puppetry, the government of India gave him in 2009 the fourth highest civil honour of Padma Shri.

Mr. Rangatha Rao was Kannada puppetry’s pioneering artist. Born in 1932, he learned traditional art from a professional puppeteer, his grandfather Narasingha Rao.. He then left his position as a school teacher to teach puppetry as a full-time profession. Supported by an academic background in theatre and drama, Ranganatha rao’s use of puppets as a medium for teaching students at school, in particular in rural Karnataka institutions was a wonderful initiative. He specializes in Rod puppetry. In order to create a wholesome mini theatre of rod puppets in traditional folk music and culture, Rao has created a team of experienced musicians and singers.

Rao and his team went throughout the country to demonstrate the rod puppetry can be a great medium of entertainment and education, by means of lecture demonstrations and workshops. In 1981, the Sangeet Natak Academy presented a national prize to Rao to recognise his achievement and to help reconstruct the form of art. In renowned world museums such as the Victoria Albert (United Kingdom), Swiss Puppet Museum (Fribourg, Switzerland), Tokyo Puppet Museum (Japan), and China Puppet Museum Rao’s puppets are displayed. The 2016 Karnataka State Rajyotsva Prize and Kamala Award from the Indian Crafts Council speak loudly on his contribution to the field of puppetry.

Dadi Pudumjee is a renowned Indian puppeteer who was born on 15 September 1951 and is the founder of The Ishara Puppet Theatre Trust. In 1992 he received the Sangeet Natak Academy Prize. He is the president of the Union Internationale de la Marionnette i.e International Puppetry Association. Later on, he was educated in Pune at the NID National Institute of Design and in Darpana Academy in Ahmedabad under late Meher Contractor, where he learned puppetry under Michael Meschke and then he moved to the Marionette Theatre Institute in Stockholm (Sweden). The puppetry of Pudumjee is not limited to more frequent types of strings and hand puppets and rather has a wide range. He used semi-sculptural marionettes, which are attached to the bodies of the players and carried across the stage.

Dadi Pudumjee, a successful artist with a remarkable skill in puppetry , is credited alone for introducing the globe to Indian puppet theatre. He led a successful HIV awareness programme and drug abuse programme in conjunction with UNESCO through medium puppetry to communicate, in order to offer art that can alter social life. He wants to strengthen the art of the traditional puppetry in India and expand the appearance and the usage of puppetry as a means of expression with his foundation, the Ishara Puppet Theatre Trust.

Due to the efforts of individuals, cultural entities and local artisans, puppetry, which had almost perished in the post-colonial period, has been not only revived but became more popular in metropolitan areas. It is also utilized for teaching (for the differently-abled), communication (in urban villages and women’s groups), and entertainment in modern everyday life.