Rangoli – A riot of colours!

It was about 2.30 in the noon when my desk phone rang. The call came from my friend who was the HR executive at office. The next day was Ayudha Pooja, the pen-ultimate day of Dasara festival which is celebrated with religious fervour at most work places across India. She had called me to know if I could draw a traditional Rangoli pattern at the entrance of our office.  When I said “no” to her, the reply I got was quite annoying. “Sigh, there are about 64 women employees in this office and not even six of them seem familiar with the traditional folk art”, she said. I wondered “Why is it so?” 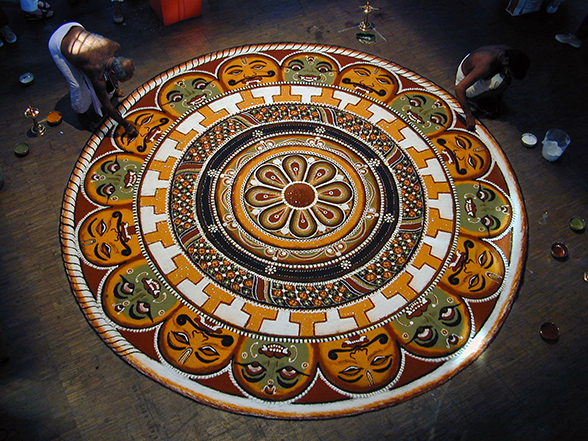 Rangoli, a traditional Indian folk art also known as ‘Kolam’ in the south, is a decorative pattern religiously created in front of the courtyard of all Hindu households every morning. Practiced since time immemorial, the Rangoli patterns are believed to be the ‘greeting zones’ for gods created at the entrance so as to invite their blessings into every home with a view to bring prosperity.

While Rangoli is created with simple patterns on regular days, they are elaborately drawn with intricate designs during festivals, weddings and other celebrations at home. With the floor itself acting as a canvas, women can bring their creative best to the fore, by drawing beautiful Rangoli patterns the first thing in the morning each day. I think these colourful patterns inspire the Indian housewife to take on the day-to-day challenges head on! 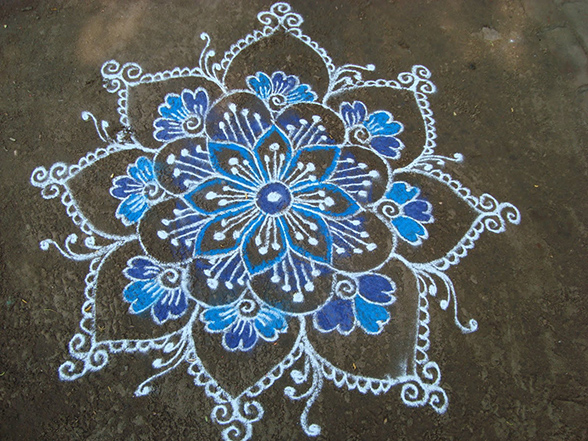 There are diverse types of Rangoli patterns made using rice flour or chalk powder that adorn the Indian households. Noteworthy among them are –

With evolving times and changing lifestyles, this age-old tradition has begun to slowly fade away. While it is quite a rare sight to see such decorative designs adorning the entranceway of Indian home these days, those living in urban apartments hardly bother to draw a Rangoli in their house doorway. Justifying the lack of knowledge, Sumana, a housewife residing in an apartment at Bangalore says, “Firstly, I do not know how to create a traditional Rangoli. From the time I started residing in an apartment, I could heave a sigh of relief about me not knowing the art form as no one gets to see even if I have drawn a rangoli before my door.”

While some people like Sumana do not know how to draw the patterns, others have not learnt the art, simply because of lack of interest. Nagashree, a homemaker in Mysore says, “Though my mother always stressed upon me learning to draw traditional Rangolis, from the time I was a school going kid, I showed no interest. But now, being a mother of two young girls, I feel sad that I am unable to pass on the folk art to my little girls as a tradition, since I myself do not know how to draw one.” 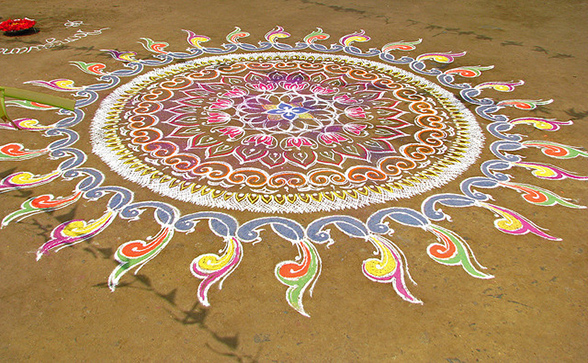 Gone are those days when we saw our mothers and grandmothers leisurely decorate their courtyards and doorways with these traditional line drawings and intricate, decorative patterns using rice flour soaked in water.  Today, the only thing we mostly get to see is the modern day avatar of ready-made Rangoli patterns created on translucent plastic sheets, which can simply be bought and pasted.