Music knows no boundaries. Yet, each region has its own distinct flavor and essence of rhythm and culture that flows into the musical veins of the land, beating in spirit and giving life to almost all forms. However, true magic happens when music from different regions amalgamates into a seamlessly glorious celebration of different symphonies, instruments and languages leading to the creation of something new or a stunning recreation of what already exists. Trikala, Simon Thacker’s latest album with his group Svara-Kanti, featuring 13 leading musicians from across different musical spectrums, such as Baul, Carnatic, Punjabi Folk and Hindustani music is a great testimony of exactly just this!

Scottish classical guitarist Simon Thacker is a renowned musician of our times. A guitarist, composer, improviser and ensemble leader he draws musical inspiration from diverse cultures. He is responsible for some great collaboration with traditional and classical artist from across the globe. His most recent collaboration has led to the emergence of the Svara-Kanti group, an Indo-Western association culminating in the double album called Trikala, as well as, various concerts at major festivals in India, Pakistan and Bangladesh.  The album has been selected for the Made in Scotland showcase.

So what motivates him to come up with cross cultural compositions? Music, like all arts, is a journey of self-discovery, says Simon who has never felt limited by language or geography or ambition. The inner world he creates in his mind is so powerful, exciting and intense yet incredibly difficult to render externally. One way of getting closer to it is by steeping himself in the aspects of traditions and cultures around the world that move him most, so that they become part of him, so that he can and have to go beyond his limitations. As he says, he does not try to copy, but these influences make him reconsider all that he knows, add new aspects to his understanding but also new aspects to what he already thought he understood. “I think we all have this desire to transcend, to go beyond the earthly and mundane and experience the sublime. Some people climb the highest mountain for an intense experience, others get lost in films, pursue religion, some might hope (wrongly) to find it artificially through drink and drugs, but I happen to create and perform music”, says Simon.

Svara-Kanti began as a quartet in 2011. What began as a way to develop new soundworlds from various influences across the Indian subcontinent developed into a community of different lineups. Though music of the future excites Simon, but traditions nourish his experimentation and give him inspiration to explore. Hence the creation of Trikala, meaning a Sanskrit word for past, present and future as the album title. The oldest lineup on Trikala is the Baul from 2015 and all the others developed since then. There are a total of 13 incredible musicians who have really connected with each other on a spiritual level to make magic happen.

‘Traversing over 2 hours and 18 minutes of some of the most advanced intercultural music ever recorded, Trikala is a work of rapturous forward momentum and a pivotal moment in the history of Indo-Western collaboration.’

Trikala takes inspiration from four different aspects of the vast musical macrocosm that exists on the Indian subcontinent: Hindustani classical (north), Carnatic classical (south), Punjabi folk (west) and the Bengali mystical folk Baul tradition of both India and Bangladesh (east). There is also a major solo work with a tangential Tamil inspiration, one of Bengali polymath Rabindranath Tagore’s best loved melodies reimagined and a moving transformation of India’s “National Song”.
For listening in to some of Trikala’s soulful melodies visit https://www.simonthacker.com/ and https://www.youtube.com/simonthacker.

The music of the sub-continent

But why collaborate with musicians from the sub-continent? 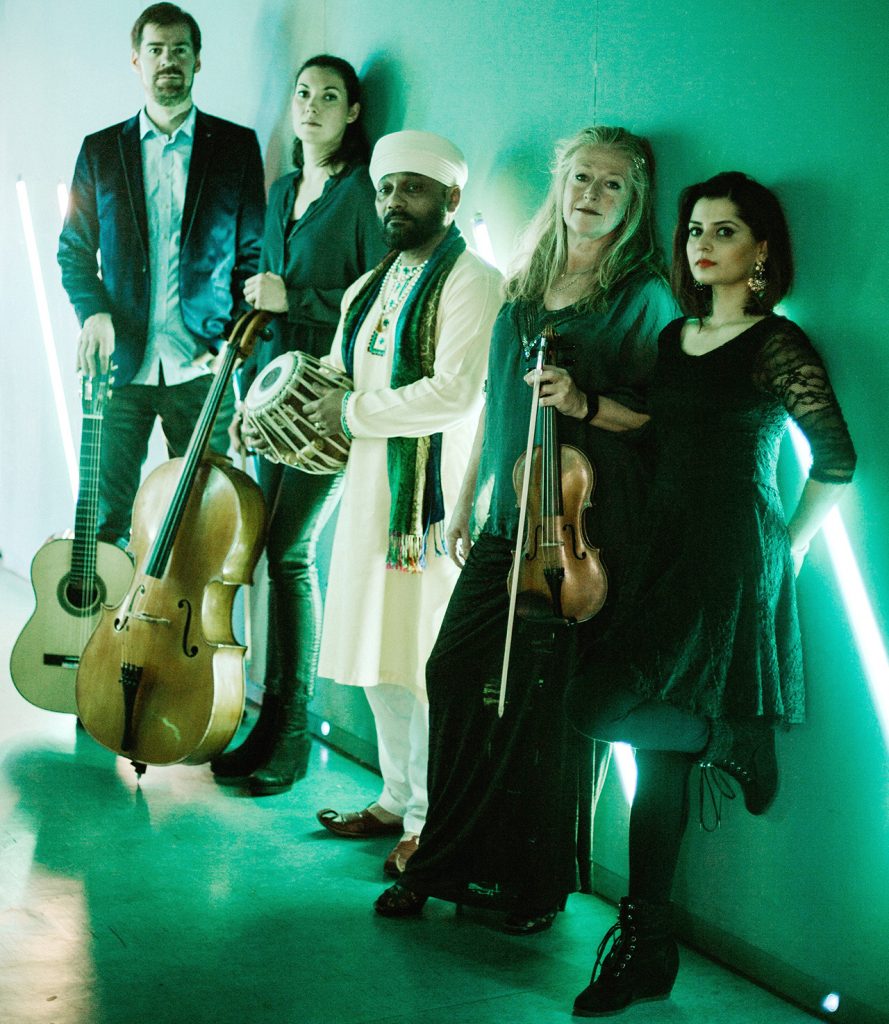 Simon has listened to countless genres from across the world, and some speak to him more than others, but the traditions of the subcontinent happen to connect with him particularly deeply. In Hindustani and Carnatic it was the limitless expression of ragas, exploring pitch linearly to create every nuance of emotion, and the forms and techniques of extemporization. He finds Baul music is searching for the same spirit as he is, hence the whole second album of Trikala is Bengali. His transformations of these songs are often radical but he has never seen them as “fusion”, a term he dislikes. They are an instinctive response and intended as an organic extension, not a middle ground. Finally, he has had a long obsession with “classic” Punjabi folk and thinks that Simon Thacker’s Svara-Kanti has established its own approach to Punjabi folk.”

Finally, we had to ask to Simon to share his thoughts regarding the rich heritage and repository of Indian music. His passionate reply seals his emotions for not only Indian but world music. “For me India has been a land of indescribably important musical, philosophical and artistic inspiration. The diversity, depth and history of the forms mean that one could never explore all the mysteries of even one of the smaller genres. But for me, even more than the “means”, the musical language, what is important is the “essence”, the genius of the great figures whose spirit lives on through everyone who has been touched by their music, whether it be Lalon, the Trinity of Carnatic music, Tagore, Bhimsen Joshi, Surinder Kaur, or countless others. India’s musical diversity also proves to me something I have long felt, that musical homogenisation is by no means inevitable and diversity can survive, and I hope that Trikala proves that it is possible to be totally distinctive and uncompromising in vision, that past present and future can coexist, and that music which connects with the “essence” that links us all can move anyone open to its message.

Top Indian Folk Singers Who Made Permanent Places in Our Hearts