I have spent a major part of my life in Kolhapur, an inconspicuous city in the southwest region of Maharashtra. Despite that it took me a long while to embark on a short ride to a shack-like, metal sheet roofed restaurant that specialized in a popular local breakfast dish. Although not a gastronomical adventurer, I always found solace in eating anything that was vegetarian. But here was a dish that was a hundred percent vegetarian, had no mention in any of the ‘scary food’ lists and was in fact extremely popular. Yet, it was still unable to find an admirer in me. Reason… the much revered and equally dreaded ‘Kolhapuri Mirchi’.

There are things Kolhapur has always been proud off – handcrafted leather chappals, wrestling, red mutton curry (Tambda Rassa) and white mutton curry (Pandhara Rassa). There is also another thing that the ‘Kolhapuris’ (not to be mistaken for the chappals!) absolutely dig and begin their days with – red hot ‘Misal Pav’.

Prepared using sprouted lentils, potatoes, farsan (akin to Bombay Mix) and plentiful of Kolhapuri Mirchi, it is served with chopped tomatoes, onions, sev and pav or bread. The ingredients in their raw nature all seem incapable of keeping any vegetarian away, but it’s the finished product that can set off a fire alarm. The bright red colour of Misal Pav was so vivid, that for a moment I mistook it to be a rendition of artificial food colour. But having lived here, I knew it was the handiwork of the infamous Mirchi. Now apart from a guaranteed scalded tongue, I was sure to have a blocked artery.

Floating on top of the rassa, or the curry, was a centimetre deep layer of oil, commonly referred to as ‘Kut’ (pronounced as cut). This arterial blockage-inducing oil layer is a must in almost all Kolhapuri and Konkani dishes. It is believed to not only entice the onlooker into eating it, but is also considered to be the deciding factor of its taste. Anything with Kut is regarded to be highly tasty and is considered to be prepared using the traditional cooking methods and spices. No fusion here. 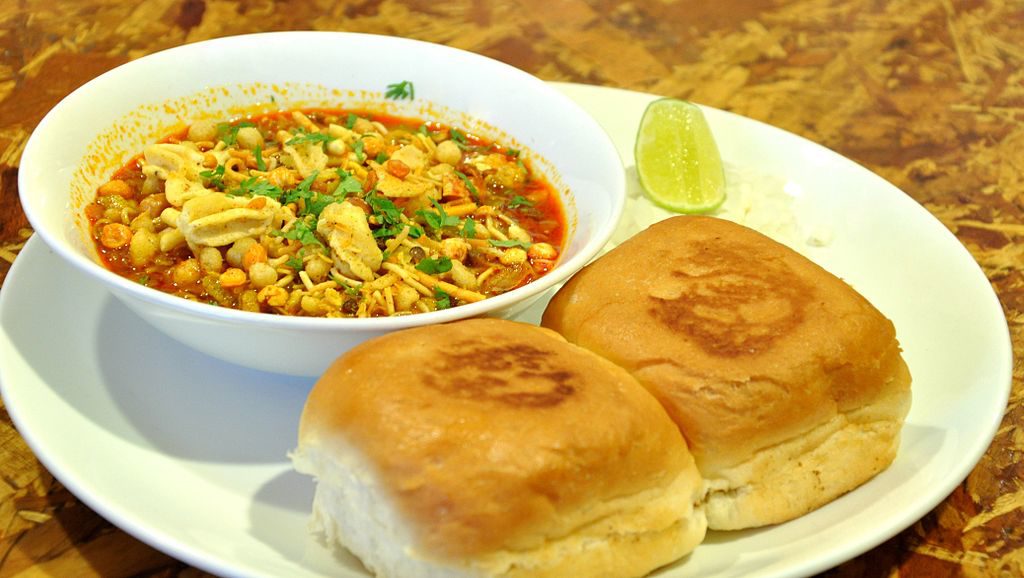 Nevertheless, it was hard not to dip my pav into the smouldering Misal and to take a large bite of the curry soaked bread. Before I knew it, I had run out of my pavs! The Rassa had definitely blown my mind but in the most deliciously amazing way! My worries of undergoing a bypass surgery before hitting 30 were gone. I had found a delectable quintessential Marathi breakfast that had sent my senses into a tizzy. The rassa, much to my disbelief, was incredibly light and with a great texture owing to the meticulously prepared spice paste with the Mirchi at its heart. The spiced lentil and potato mixture sitting at the bottom of the plate, soaking through the rassa provided a great body to the dish.

After a quiet session of ruing for the lost time and missed opportunities, the reason for the popularity of this lip smacking local delight eventually made sense to me. It was none other than the mirchi I had so vehemently avoided all this time! It brought forth a warmth, comfort and intensity that I had come to experience while living in the city of Kolhapur. After finishing the final spoonful of the missal in my plate, I sat wondering of all the possible ways to better the experience and before long I found my answer sitting in front of me — a second plate of smouldering Misal Pav!