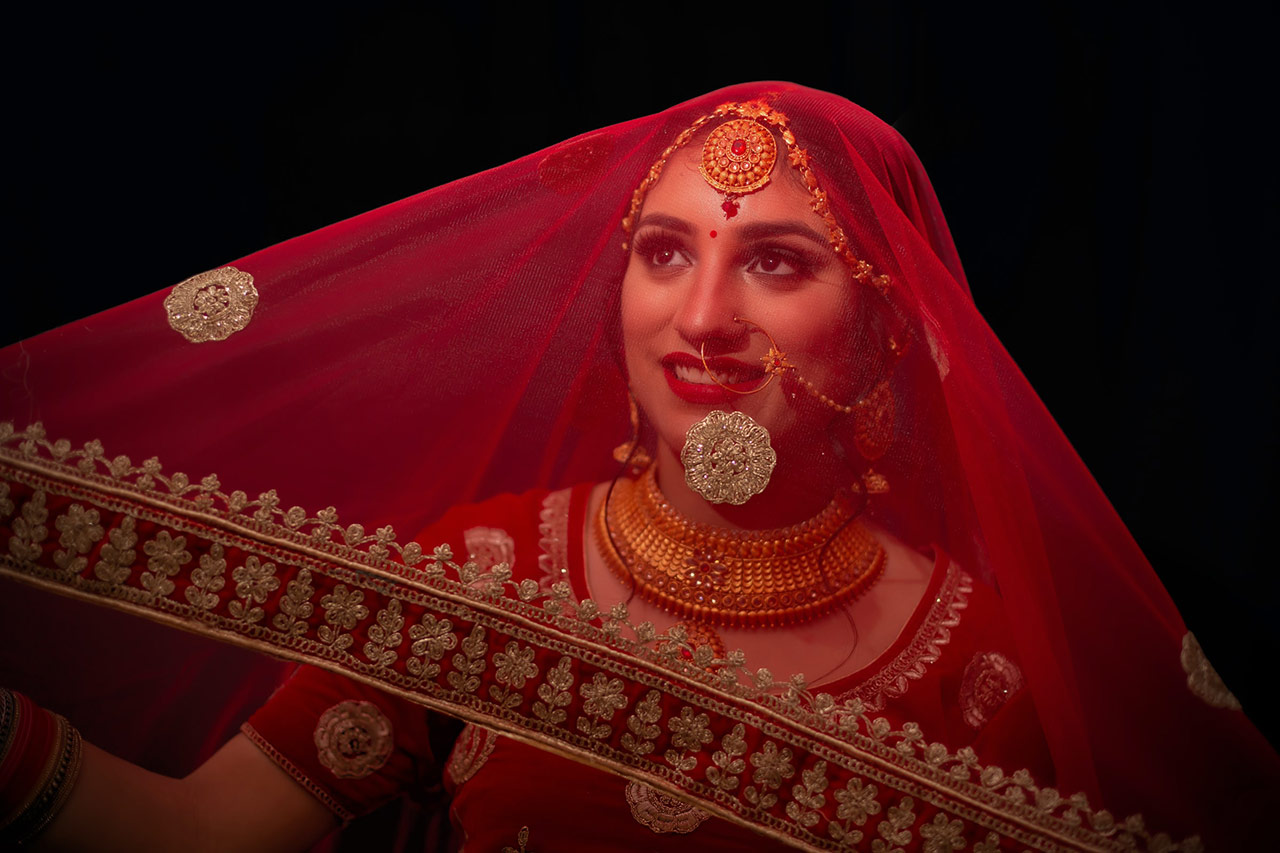 In Indian culture, the vibrancy of decorations, diamonds, pearls and gems has always been captivating. We just don’t only admire brilliance, there is a concept that it is wise to decorate ourselves with decorations through the ages. Many evidence indicates that early men and women wore jewelry.

In Indian literature, women are described with adornment while in all Indian classical dances shringar rasa is a major motif. Tagore’s Radha states in Bhanushinger Padavali who embellished herself to approach Krishna:

The scriptures also insist that there is a scientific reason for practising Solah Shringar. Though apparel is for modesty and accessories like perfumes are to be made attractive, the concept that the 16 adornments help for good health and well-being. Women are Shakti incarnations for Hindus. Ornaments are therefore traditionally used to protect orifices and limbs and control the power from these parts of the body.

The bindi, a decorative spot between the eyebrows, represents the mystical third eye, the two eyes are considered to be the sun and the moon, perceiving the past and the present. The symbolic third eye is light with the power of perception to see forward. 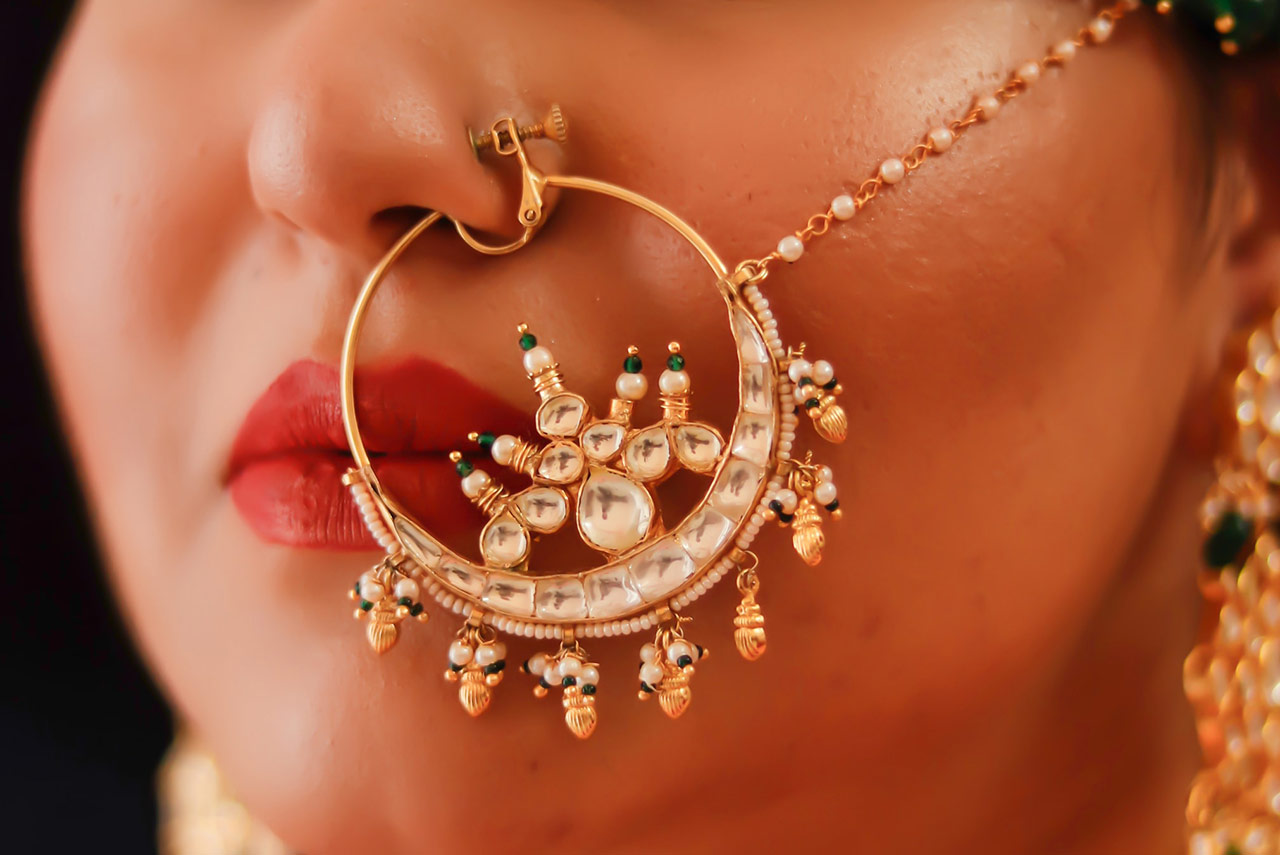 Most married Hindu women choose to wear the Nath on the left nose, as the nerves leading from the left nostril are associated with the female reproductive organs. It is believed, Women who get their noses pierced by the ring of the nose had less distress and ache during birth. Some argue it does not hypnotise women, as the wavelength of the brain is curbed. 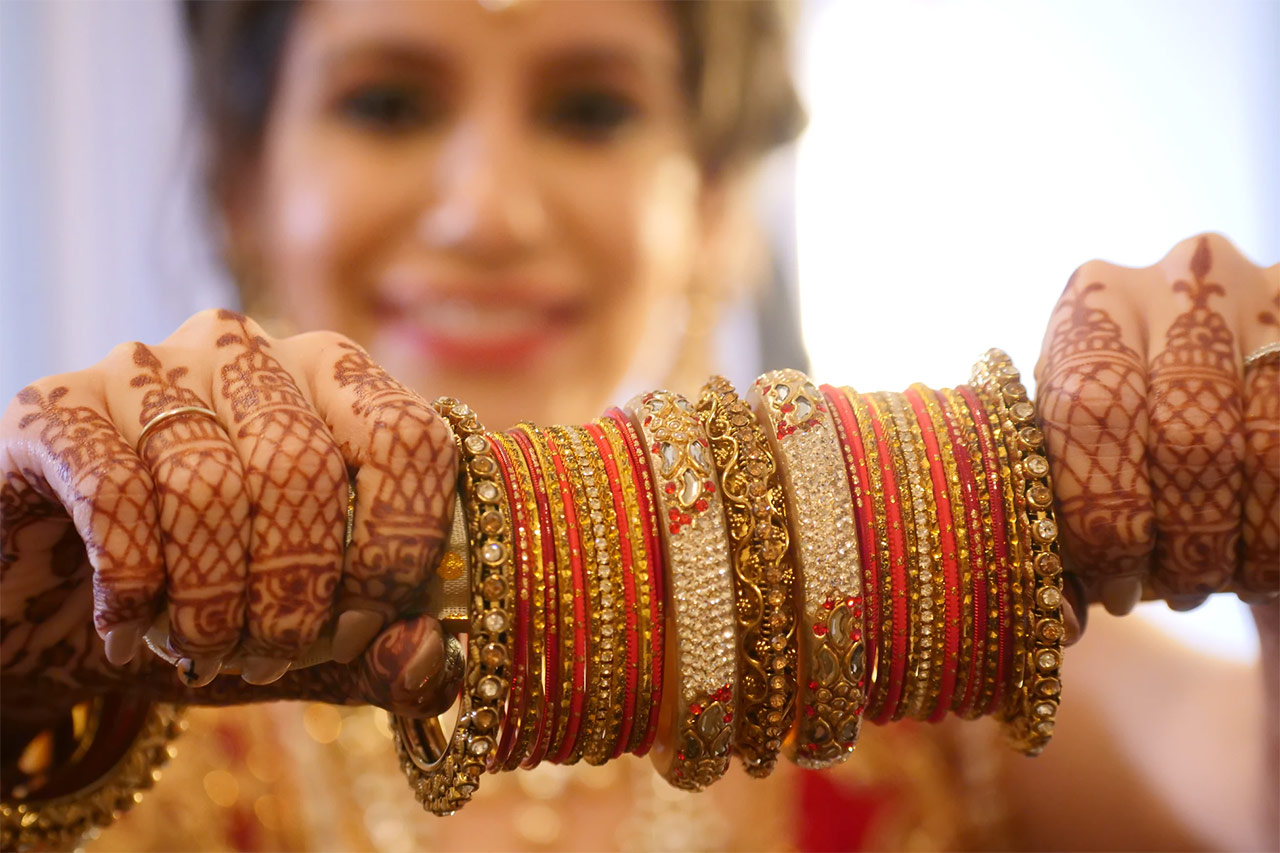 The word bangle comes from the traditional phrase ‘Bangri’ which in Sanskrit means ‘the adorning of the arm. Due to their round shape, the bracelets are supposed to stimulate a woman’s blood circulation and guide the cosmic energy coursing through her body back to her. The sound generates an aura around the body of women that protects them against all threats and evil spells. In various Hindu scriptures, this fact is presented quite discreetly. At the time when the bangles clash against each other, the Kriya Shakti (action waves) activate women’s Surya Nadi (sun channel). These waves spread over the female body and defend her against harmful atmospheric forces.

Toe rings are said to regularise the menstrual cycle of the woman. The nerves of the second toe are attached to the uterus and friction and when the rings are worn, the rings help the reproductive organ to heal. The bicchiya or toe ring is traditionally adorned on the second toe of a married woman’s feet, whereas unmarried women wear it on the third toe. Donning a silver toe ring on the third toe by unmarried women is alleged to aid them to evade or at least reduce period pain.

For women who wear toe rings on the fourth finger, the nerve that runs through this finger is connected with brain neuron cells and Wearers’ health benefits from repeated metallic friction, which allows them to approach life with ease and confidence. 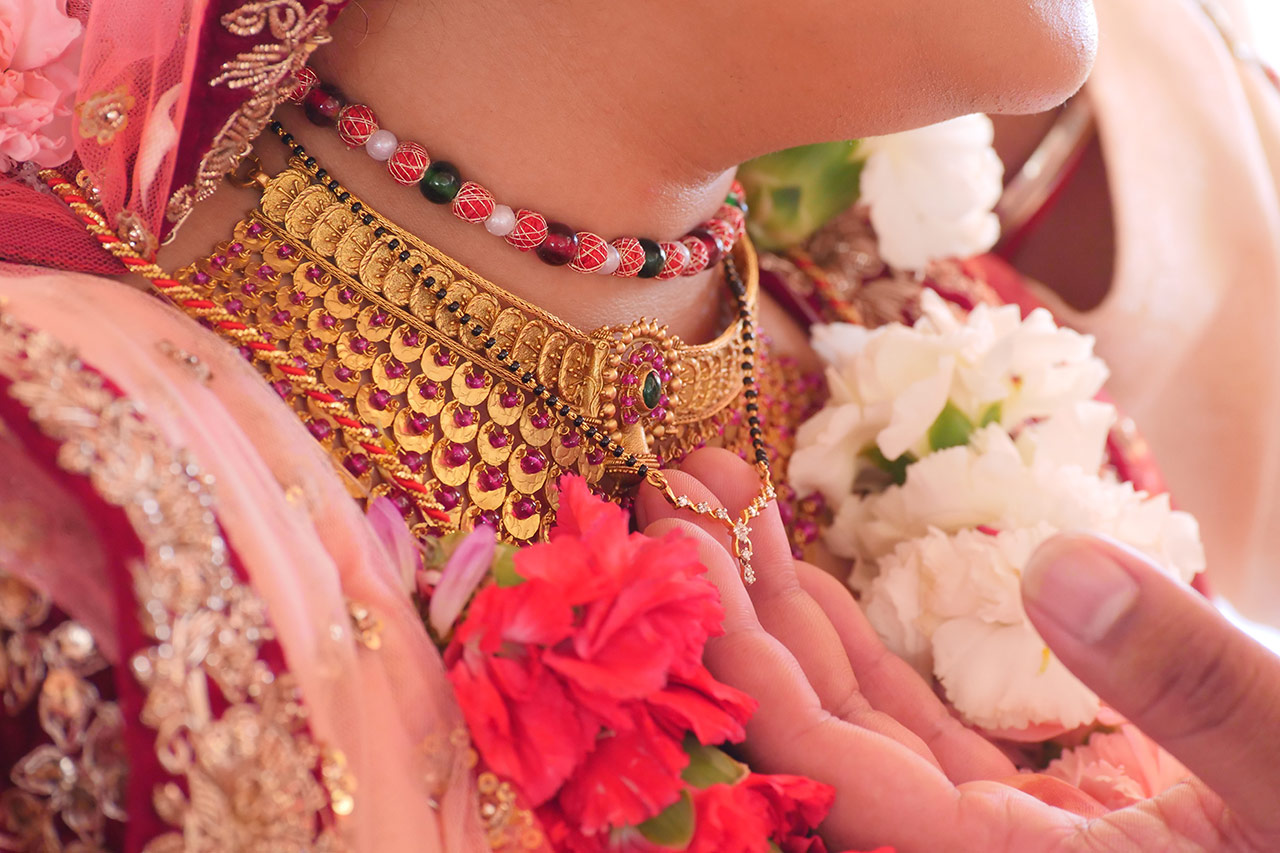 Necklaces of various lengths, some arranged in the shape of a collar or choker, are strung with pearls, armband designs for Indian brides in gold pieces, and gold beads. The bride also wears necklaces crafted from floral garlands. The mangalsutra is the most traditional necklace, presented by the husband on the wedding day. It’s crafted with black beads. It is believed that blood pressure is controlled and blood circulation is improved by wearing necklaces like the mangalsutra.

Waistbands are not commonly used these days, yet they help to keep a woman’s body by preventing fat saturation in the waist. Kamarbandhs are used to accentuate females’ elegant shapes. The waistband is composed of gold and silver and is embellished with gems. It is used to keep the sari in place. 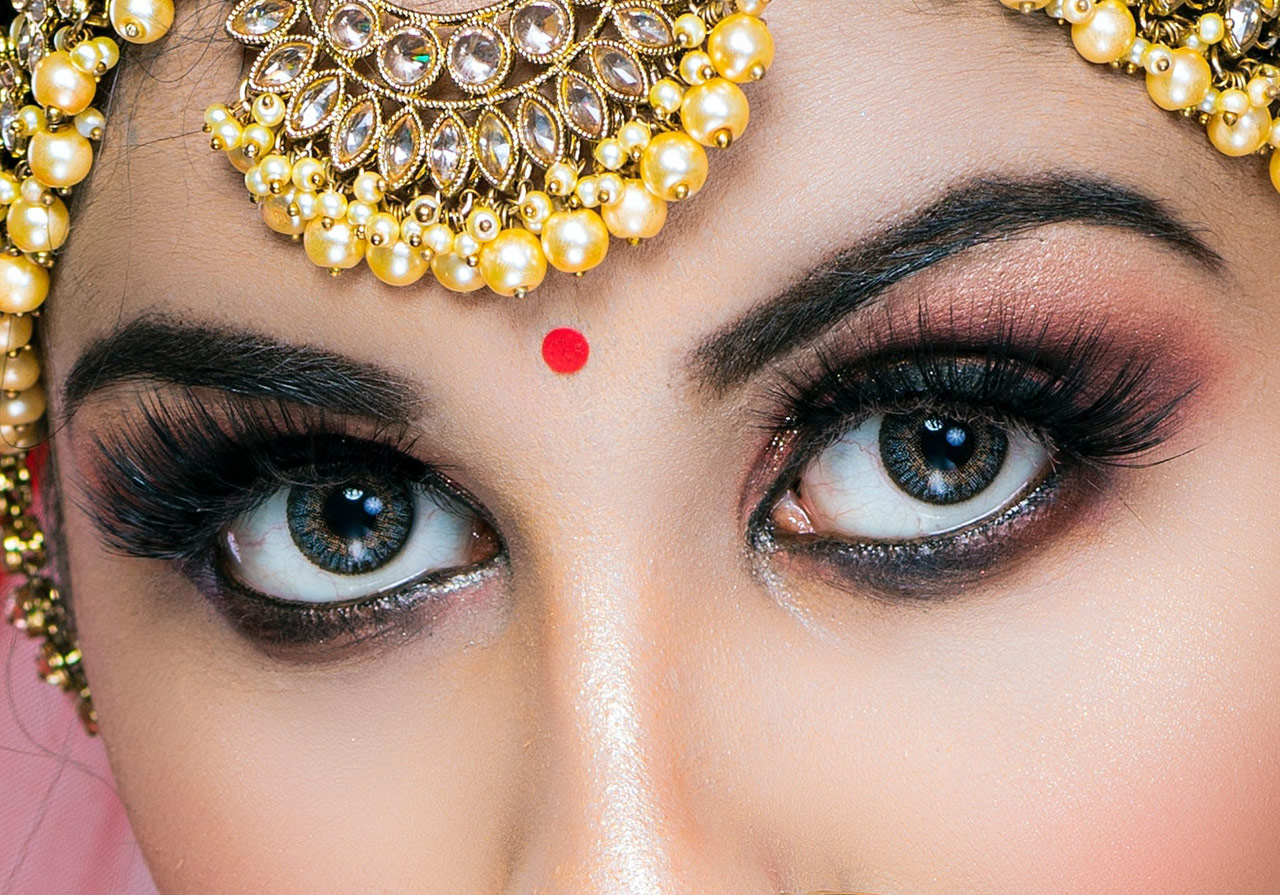 Kajal is solely used to highlight the size and appearance of the eyes. After all, the eyes are known as the soul’s windows because they express heartfelt emotions. Natural kohl or kajal can be made at home by collecting soot in a silver dish balanced above a candle burning in mustard oil. Camphor is sometimes added to the oil. This combination is applied to the outer rims of the eyes with a silver stick. It is stated that when it combines with natural tears, it protects the eyes from strong sunlight and dust. 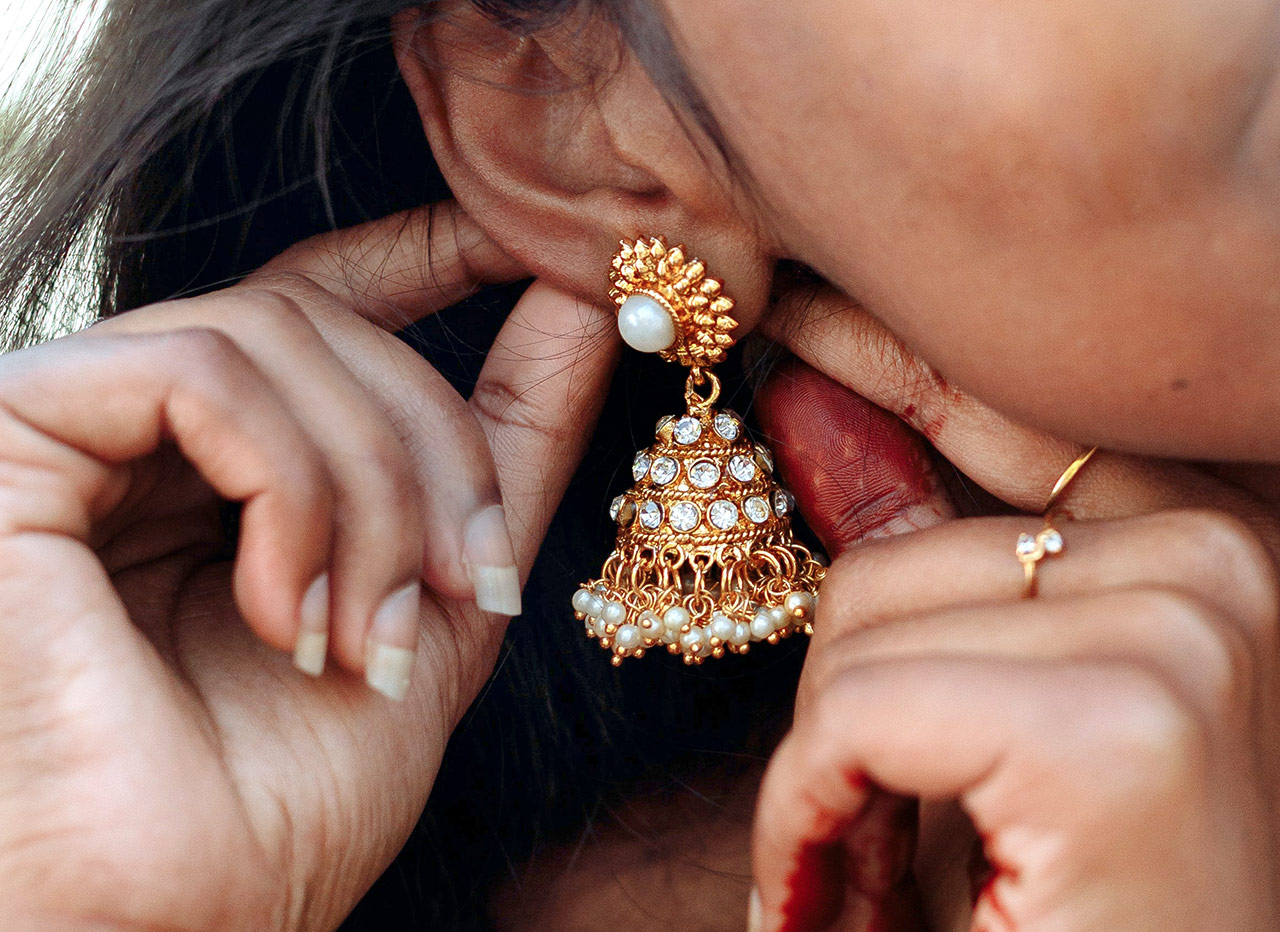 Earrings, such as Jhumkas, Danglers, Karn Phool, and Chandbalis, are a woman’s must-have beauty accessory. Earrings are ornately adorned pieces of jewellery made of gold or silver that are set with diamonds, Kundan, and other precious gemstones. Earrings with intricate ear cuffs and chains that hang from the lobe and ending with an adorned pendant are common. Karn Phool is thought to enhance the essential traits of the female form such as kindness and spiritual perfection.

An acupressure point is located on the outer region of the ear where the earring is worn. Wearing an earring has an acupuncture effect and aids in the treatment of menstruation difficulties and aids in the health of the kidneys and bladder. 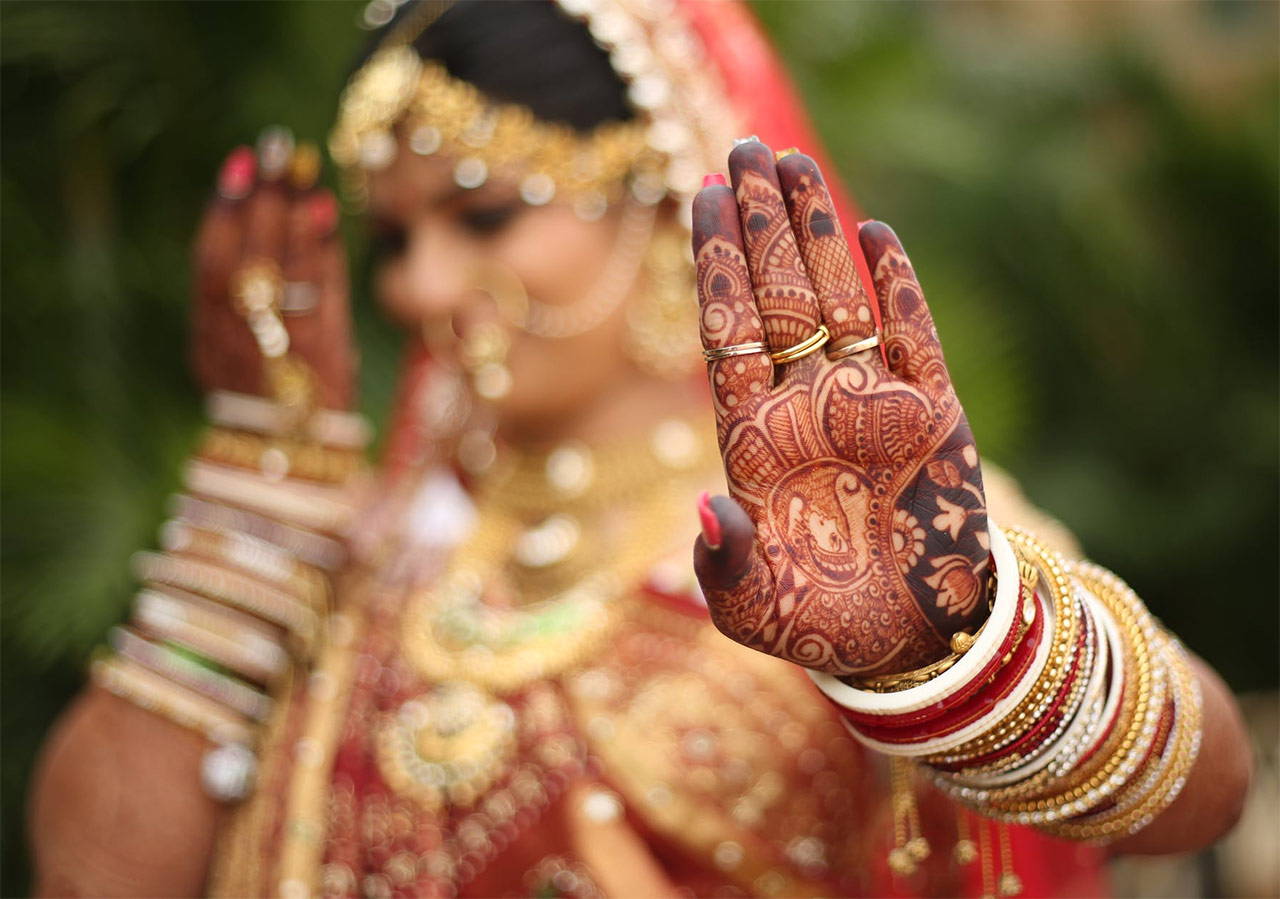 Henna is an indigenous herb that is ground into a fine paste and applied to the bride’s hands and feet. The intricate mehndi designs create a deep crimson hue that signifies love, luck, prosperity, and fertility. Mehendi has a cooling effect and helps to relax the nerves. It cools the body and heals injuries and wounds. 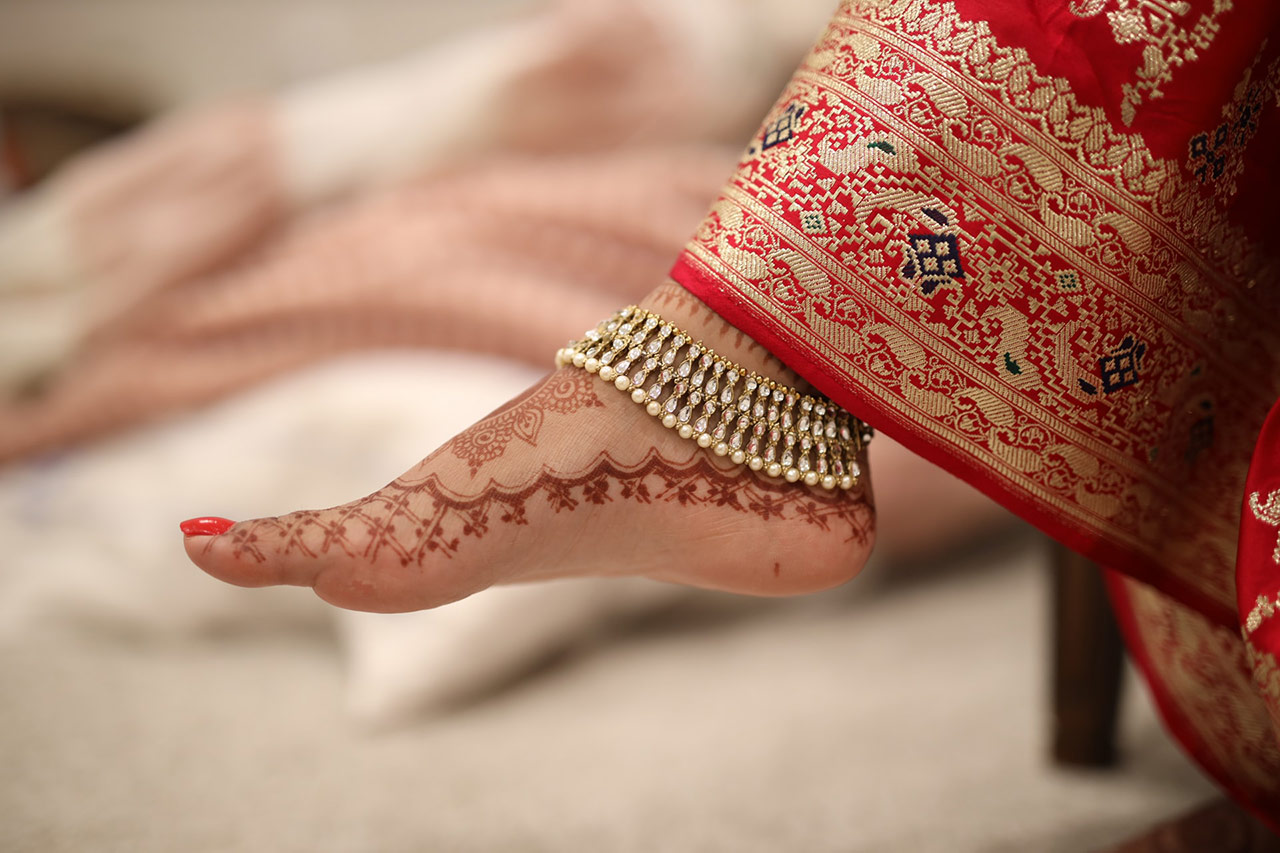 Anklets are typically made of silver and have a thin chain or a thick multi-layered pattern. A bride who wears anklets is deemed to be an incarnation of the goddess Lakshmi. Anklets cannot be made of gold since wearing gold on one’s feet is not considered good. Anklets provide relief from Sciatica, which is a discomfort caused by leg weakness. It is also supposed to aid with blood circulation and the treatment of swollen heels. Wearing anklets also improves immunity and aids in the treatment of menstruation disorders, hormone imbalance, infertility, and obstetrics. 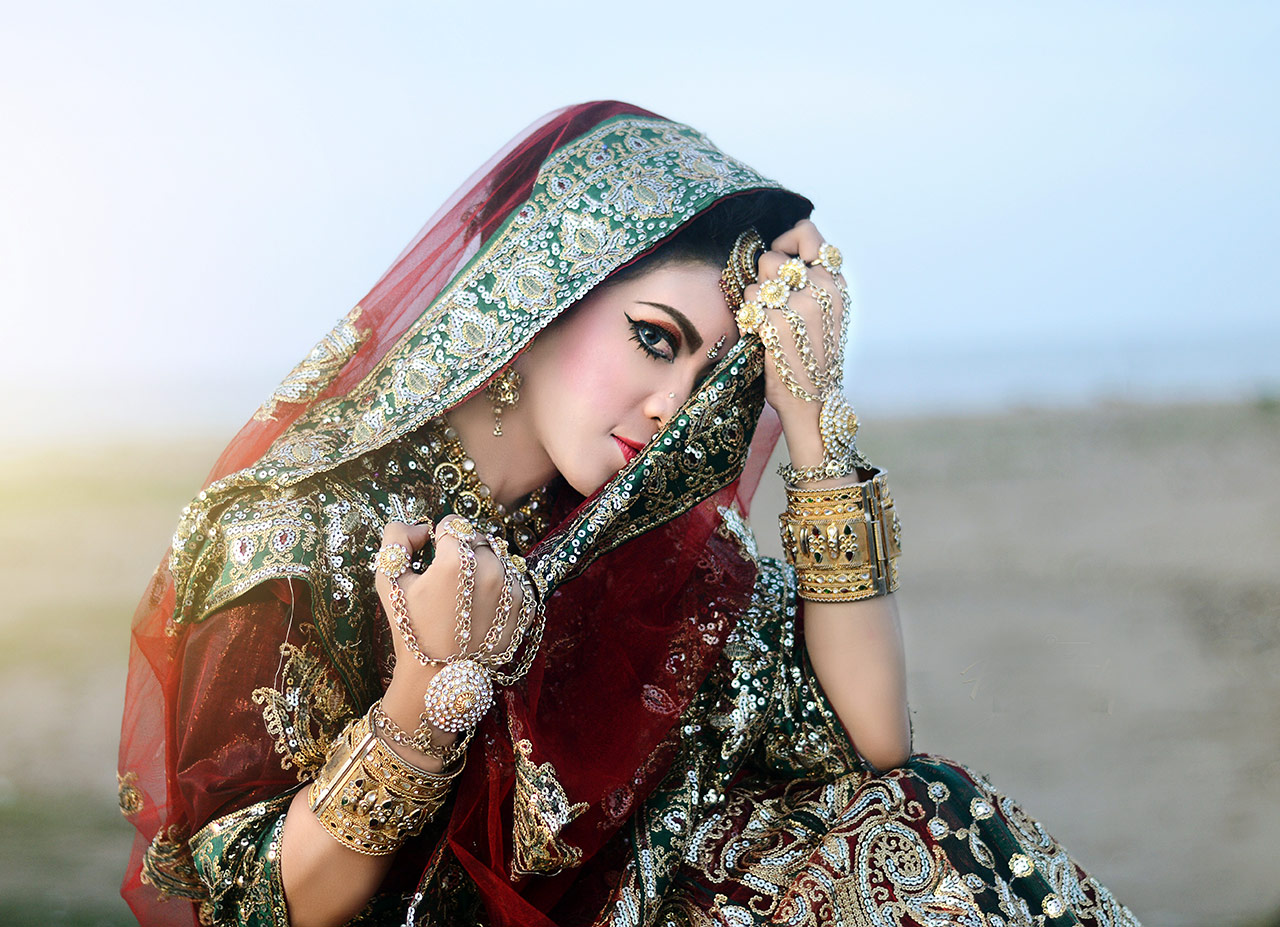 On her hands, the bride wears eight rings, each with a focal floral or medallion pattern that covers her palmer side. This is referred to as Hathphool. Three of the Hathphool’s chains join to a bracelet, and five to each of the fingers, and they are connected to finger rings. The rings on your fingers stimulate brain activity and are hence beneficial to your health.

Just like Mehendi, the evident use of mahur, which is a red dye, used by women to adorn their hands and feet, can be seen in the Hindu Upanishads. The red of the alta symbolises life, fertility and prosperity. Alta was traditionally produced from the juice of beetle leaves. At times, kumkum (powder) in liquid forms were used to paint the hands and feet red. Alta is also known as Mahur. The vibrant shade of alta is an essential feature of Bengali and Odissi celebrations. The Bengalis’ most prominent celebration, Durga Puja, would be unfinished without the use of alta by married women. Not just the women, but even the idols of Goddess Durga’s feet and hands are gorgeously outlined with the alta’s rich colour. In Bengali weddings, the alta becomes the centre of a significant ritual after the wedding. 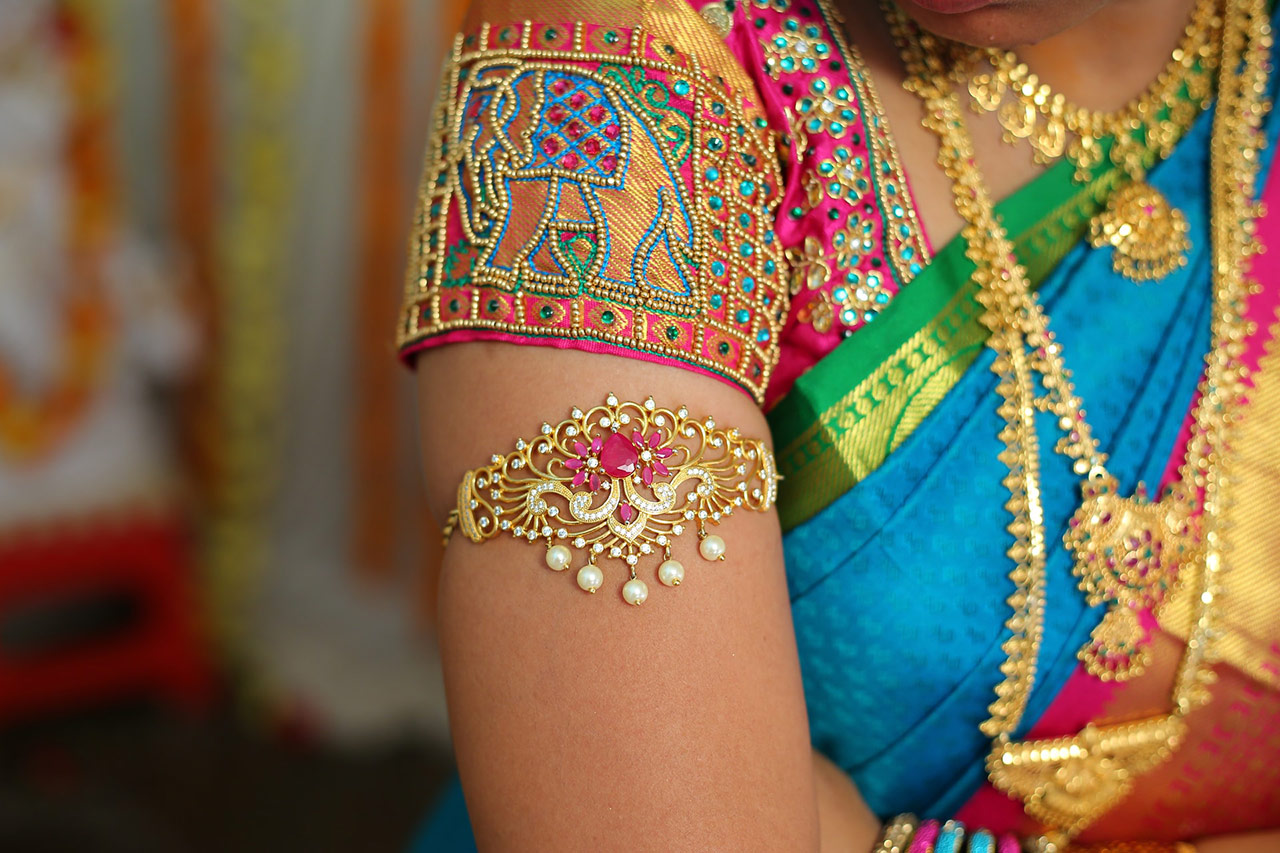 In Rajasthani, Mughal, and Jaipuri weddings, the Baaju-band is commonly observed. Armlets are constructed out of pearls or diamonds set in gold and wrapped on the upper arm. The Armband aids in the regulation of blood circulation in the arms and provides just enough resistance to keep your arm relaxed.

Sindoor is a red-coloured powder that is applied to the centre parting of a bride’s hair. This is a sacred symbol of a married woman (Suhaag) in the country, just like rings are in western countries. Young girls do not put Sindoor ahead of marriage. For the first time, the groom places vermillion on the bride’s head during wedding rites. In certain Hindu cultures, it is necessary to have Sindoor on a married woman’s forehead all the time. Sindoor, which is made from turmeric, lime, and a trace of mercury metal, cools the body and relaxes the bride. As the wife’s obligations grow, the stress on her body might be detrimental. Wearing a sindoor keeps her emotionally calm and in control.

The bride also wears an aarsi, which is a thumb ring. It usually has a stunning type of mirror work incorporated in it that allows the bride to see herself. It was also used to catch a glimpse of her future life partner because during wedding rites the woman wears a veil and cannot see the groom’s face.

Wedding hair accessories come in a number of styles and designs. Each culture has its own style in which hair is decorated. While Gajra, a few meters long, is utilized for some cultures, Keshapasharachana is one of the famous hair accessories to the south. The bride usually knots her hair into a traditional braid or bun, which is adorned especially with gold and floral decorations. Because of their long-lasting smell, jasmine flowers have been historically employed.

India is the land of numerous cultures, rituals and customs. The rituals are beliefs that have been passed down to us from our ancestors and our societal practices have developed around these ideas. It is a very usual custom to bless a newborn or a new bride by presenting gold jewellery of good fortune on them. Even kids and babies are made to wear jewellery to protect themselves from diseases. Despite traditionalists’ claims, the medical evidence does not support claims that ornaments improve the health of those who wear them.