India is renowned for its extensive selection of snacks and sweets. Indian states each have their own distinctive sweets and snacks. Additionally well-known nationwide are the traditional sweets produced in Andhra Pradesh. Traditional sweets of Andhra Pradesh are scrumptious and wholesome. The majority of the well-known sweets from Andhra Pradesh are healthy and made of dry fruits. Despite Andhra Pradesh’s reputation for spicy food, the state’s sweets continue to enjoy a strong following nationwide. There are many traditional sweets produced in Andhra Pradesh that are made for festivals and other special occasions. There are several types of sweets offered for different occasions. They have sweets for festivals, weddings, parties, and other occasions. Because they value quality cuisine and maintain a high standard of hygiene, Andhra Pradesh will always have fresh sweets available at all times. Aside from these sweets, they provide a variety of unique and tasty sweets for various religious ceremonies and rituals.

Putharekulu is a traditional South Indian dessert. The sweet is packed with sugar, dry fruits, and nuts and wrapped in a wafer-thin rice starch layer that resembles paper. The dish is popular in Telugu regions for festivals, religious rituals, and weddings. Dip a cloth into the liquid batter and spread it over an inverted kadhai to make it. The cloth is quickly removed, leaving a batter stain on the kadhai. It becomes paper-thin and crispy when cooked in a hot kadhai. Ghee and sugar are then sprinkled on top, and Putharekulu is folded into rolls. To make it even tastier, add crushed dry fruits before folding.

Ariselu is a traditional Andhra Pradesh dessert. It’s made with rice flour, jaggery, and ghee and served during the Sankranti holiday. Ariselu is related to Adhirasam, a Tamil Nadu delicacy. Sesame seeds are added to this version of the dish. Sesame seeds are a speciality in Ariselu because they aid in body temperature regulation, especially during the winter months. This is a delicious Indian treat to make for the holidays and share with family and friends.

Kajjikaya has a light, crisp shell, and when you bite into this crescent-shaped sweet, its crunchy texture expands into every bite, leaving you happy and wanting more. Before being deep-fried, small balls of maida dough are shaped into thin puris and packed with a mixture of dried coconut, sugar, semolina, and cardamom powder.

Kakinada Kaja was made in Kakinada in 1891 when Chittipedi Kotaiah, a native of Chinaparimi village near Tenali in Guntur district, moved to Kakinada and opened a sweet shop. It was carried on as a family legacy from then on, and the family’s entire generation still runs them from the city. It is still marketed in big quantities, and people go from all across India to sample it. They also sell a variety of sweets at their shop. It’s also available in a variety of cuisines throughout the city. Kaja’s main ingredients are refined wheat flour, sugar, and edible oils or ghee. 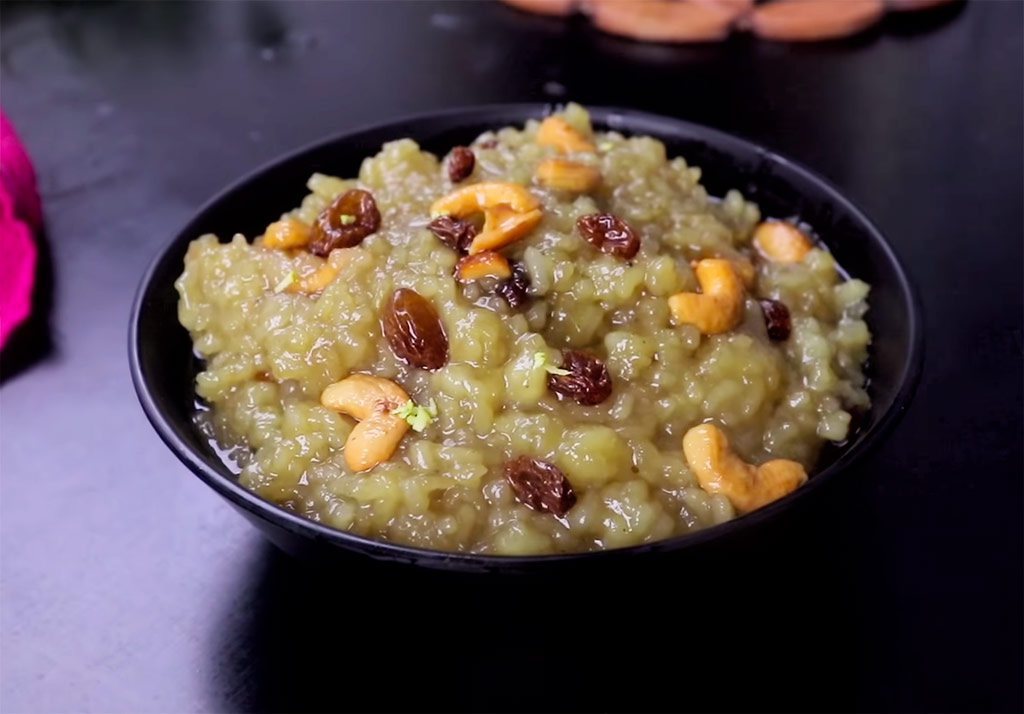 Andhra style rice payasam with jaggery is known as bellam paramannam. In some areas, it’s also known as Sankranti pongali or bellam pongali. This is made especially for the Sankranti holiday. Sankranti is the harvest festival. Rice, milk, sugar or jaggery, almonds, and ghee are used to make this sweet delicacy. Some people use a variety of grains, lentils, coconut milk, or other ingredients to make the original sweet Pongal or paramannam.

Poornam boorelu, also known as poornalu, is an Andhra cuisine delicacy made of chana dal, jaggery, cardamoms, urad dal, and rice. In most Telugu festivals and occasions, it has been a staple on the menu. Poornalu, like most other Telugu cuisines, employs urad dal as its main ingredient since urad dal has long been the most widely produced pulse in Southern India. Also it is  served at festivals, weddings, and other special occasions. For varalakshmi vratham and Durga Navratri, most telugu-speaking houses cook poornam boorelu to offer as naivedyam to the Goddess.

Kova Kobbari Laddu, also known as Kobbari Kova Kajjikayalu, is a traditional Andhra dessert. The outside layer of the sweet is prepared with khoya (milk solids) and sugar, and the filling is made with fresh coconut and jaggery, which is cooked together to form a thick paste. Many South Indian sweets, such as Kobbari Poornalu, Thengai Poli, and Vella Kozhukattai, can be made with coconut jaggery filling.

Sunnunda, also known as Sunni Unda, is a sweet delicacy from Andhra Pradesh. The main ingredient is Urad Dal, also known as Minapappu (skinned black gram). Roasted urad dal, jaggery or sugar, and ghee are used to make it. Cardamom seeds and your favourite nuts can also be added. In the old traditional recipe, jaggery or bellam is used instead of sugar. This delicious meal is high in antioxidants. They are high in iron, protein, and minerals.

Sweets are an important part of our lives, and they are provided at every happy occasion. These traditional sweets are also valued in Andhra and are prepared on a regular basis. These are the most well-known Andhra Pradesh sweets, however, the people of Andhra Pradesh also enjoy a variety of other regional sweets. Most of Andhra Pradesh’s famous sweets are made at home because they don’t require much precision and are simple to make.