The Beautiful Sand Art in India Will Leave You Amazed!

Most people might believe writing in stone is better because of its longevity. Those writings on sands are washed away, probably erasing the memory and its significance. However, with sand artists and sand arts increasingly showcasing their skill, the poetry crafted is definitely here to survive the sands of time.

We all have at some point or the other indulged in sand play. As kids and adults, either by building sandcastles or randomly zigzagging lines on sand. In fact, a visit to the beach is seldom complete without some retrospective ‘sand’ time. It could be passing the sand through our fingers, digging our feet into it, or making mini-mountains for really no reason. The feel and touch of the sand can surely elevate the spirit and its softness and fluidity give a sense of flow and movement. And hence it is no surprise that sand has inspired artists and creative minds all over the world. Sand art has many different techniques and aspects to it. And though the art form has its presence in many parts of the world, Indian sand artists are definitely making a place with their skill and creativity on both the national and international stage.

What is Sand Art?

According to online definitions, sand art is the ‘practice of modeling sand into artistic forms’. These forms include sand sculptures, sand brushing, sand painting, and sand bottles. Each of these forms has its own charm and value.

Sand sculptures – A sandcastle is a basic sand sculpture. However, artists that make huge sand sculptures on beaches require a bottomless plastic or wood form, into which the sand is poured and mixed with a lot of water. The process is repeated until the sand is totally compact. Similarly, these forms are placed above the base, and sculpting begins from the top, continuing downwards after the top form is removed. Sand sculptures can be made from any type of sand, including quarry and beach sand. However, clay and silt can also be used, so that it’s easier to mold and make the sculpture stand.

Sand painting – Sand Painting is when colored sand mixed with various pigments are poured onto a surface. The surface can either be fixed or unfixed. Native Americans, Indigenous Australians, and Buddhist Tibetans have mastered the art of sandpainting, which is also often known as dry painting.

Sandpainting has a very rich history and is said to have originated in Native America. Most famous in the Navajo Nation that occupies parts of Arizona, Utah, and New Mexico in the USA. The Navajo sandpaintings are ritualistic and rooted deeply in tribal traditions, customs, and beliefs. The Buddhists in Tibet compose mandalas made from sand painting. This is again a spiritual process where the lamas usually begin the painting ceremony by drawing the outline of the mandala. As days pass the colored sand is layered and poured from the traditional chak-pur or funnel.

Sand brushing – Sand brushing is the art of ‘brushing’ away the sand grains while creating shapes. It is commonly done in areas where the sand is fine and dry. Animal and human figures and shapes are usually made using this sand art form.

Sand drawings – These are popular in the South Pacific regions where the sand is volcanic in nature. Artists use a finger to create lines and create abstract art.

Sand animation – The newest form of sand art to foray into the field is sand animation. A lovely display of a series of images; the artist’s hands alone creates the art. The sand is applied to a surface and the performer uses either a lightbox or overhead projector. The animation is often accompanied by music and a live audience too.

The Role of Technology in Sand Art

Almost all sand arts are primarily done by hand. Some sculptures may require very basic tools but it is the hands of the artist along with the sand that creates magic. However, due to the very nature of its main ingredient or component, sand arts are hard to withstand the test of time. And thus, one has to acknowledge the role of technology in the spread of sand art. Today, sand artists can click and upload their creations or videos of their animations and their work can easily survive through the years. The longevity of the art is thus propelled by technology which helps it to remain in existence even when the art itself has washed away.

Social media also plays a big role in generating awareness and pushing sand artists and their creative skills at the forefront for a larger audience to see and acknowledge. Thus, though sand arts have been known to exist in ancient times, technology has a definite role to play in its growing popularity today.

Sand art in India has catapulted and made a place in the hearts of the people. There are primarily two reasons for which sand art is increasingly becoming popular in the country. One is because of the likes of some exceptionally talented sand artists, such as Sudarsan Pattnaik whose sand sculptures have become a medium of expression and creativity. The other is, of course, the use of technology.

Several sand artists from India are using sand art to create not only aesthetic illustrations but also to express and opine about current social, cultural, and political happenings. A look at Sudarsan Pattnaik’s many works throws light on the artist’s genius. But it also makes it clear that sand art is just not about beautiful figures and castles. His sand sculptures cover a wide range of topics, including pollution, COVID pandemic, saluting police officers, etc. His sand sculptures also center around landmarks, such as the soft landing of Vikram lander on the moon, elections, or commemorating deaths of personalities, such as Sushma Swaraj. In fact, one of the most recent of his works is his tribute to MS Dhoni on the announcement of his retirement. He, of course, holds the record for the tallest sandcastle of the world, in the Guinness World Record at the Puri beach. He has also been awarded the Padma Shri in 2014.

Where some forms of sand art can be done anywhere, such as sand animation, sand sculptures are usually done on beaches. In India, the two major sand art destinations are as follows:

Puri Beach – The Puri beach in Odisha has become the altar and hub for sand sculpture in India. Sudarsan Pattnaik hails from Odisha and it is here that he showcases his sand arts. He has also opened the Sudarsan Sand Art Institute in Puri. This open-air institute is one of the first in India to train budding sand artists.

Mysore Sand Sculpture Museum – Located in Mysore, this museum is one of its kind. It is home to several sand models and was founded by M N Gowri. M N Gowri is one of the finest female sand artists of India who has been working on sand art for several years now. 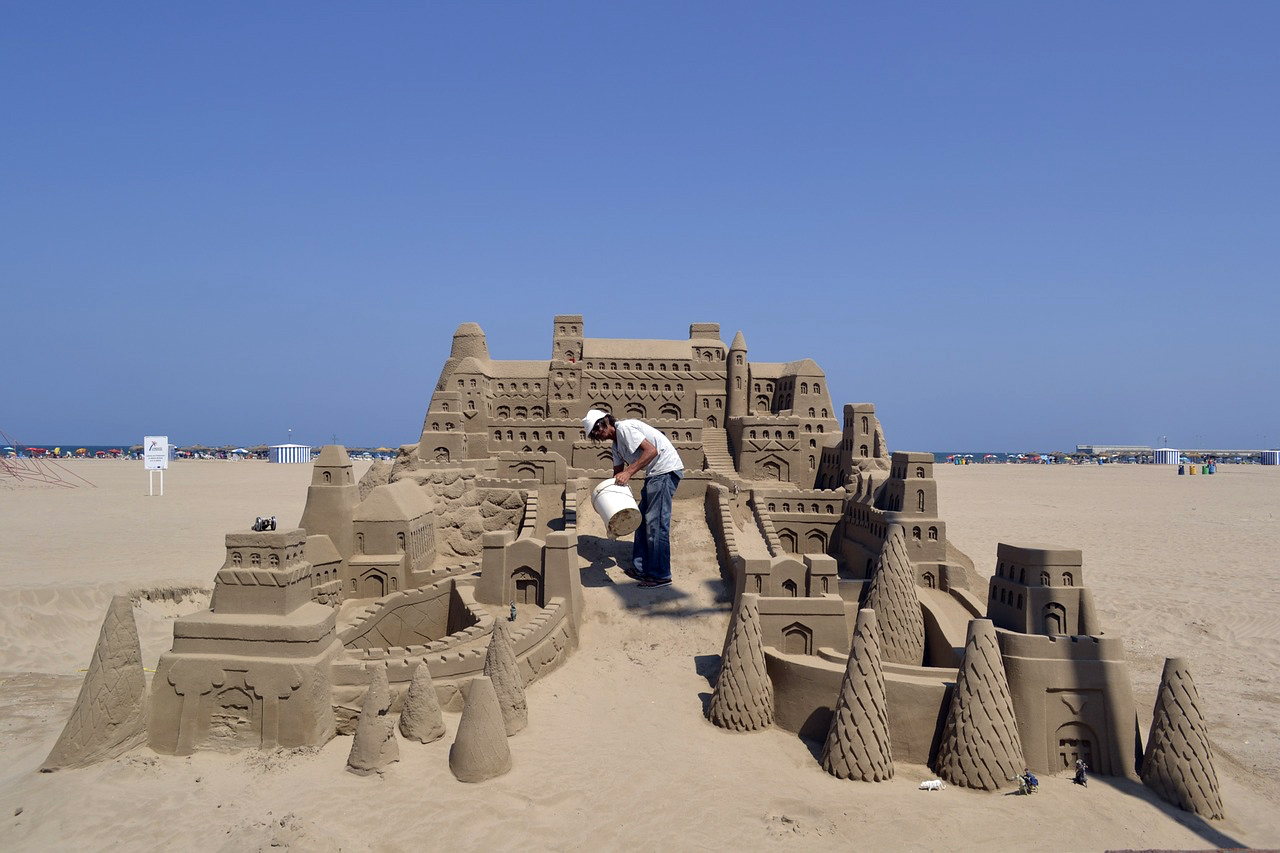 Sudarsan Pattnaik has won many of these competitions, including becoming the first Indian to win the Italian Golden Sand Art Award. He has won accolades in many sand sculpting competitions in Russia, Denmark, Bulgaria, and many more.

Sudarsan Pattnaik, of course, stands out as one of the leading sand artists in not only India but also the world. However, there are many other sand artists in India, such as Ranjan Kumar Ganguly, Badal Barai, Vivek Patil, Manas Kumar Sahoo, Ronnie Chibber, Nitish Bharti, Manisha Swarnkar, Venugopal, Narayan Sahu, and many more. Most of the younger brigades of artists are exceptionally well versed with sand animation and many more are increasingly finding recognition on social media or throughout media outlets, such as talent shows, etc.

The sand art forms are thankfully finding recognition as authentic and aesthetic artistic expressions. Sand artists, like other creative minds, are using their skill and imagination to talk about important matters, to address and spread harmonious messages, and using art as means to express, educate and inform people about various issues. However, unlike other major art forms, such as paintings or performing arts, sand art still has a relatively long road to cover in terms of coverage, acknowledgment, and promising new talent. But the future of sand art and its various forms looks exceptionally bright.