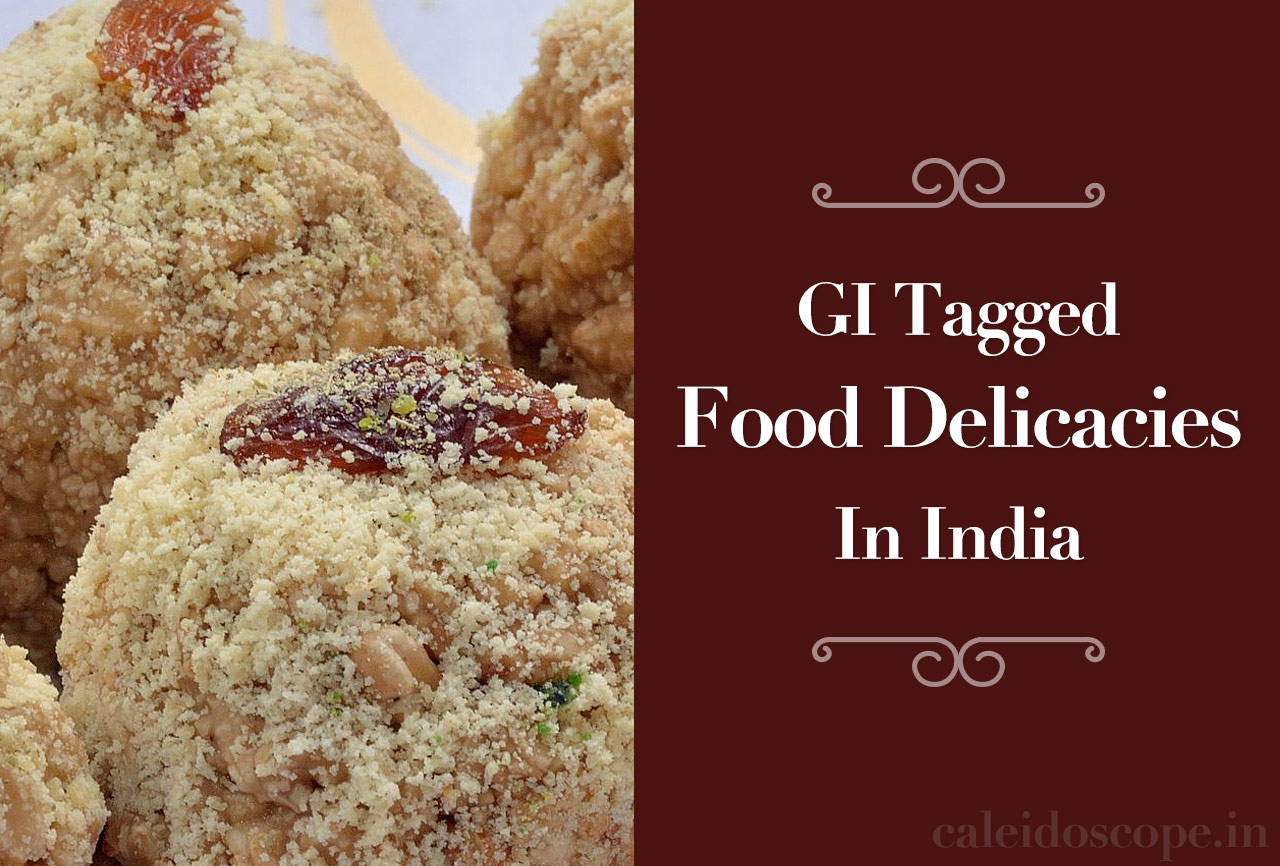 Geographical Indication is a marking that specifically defines items, commodities, and things as being native to a specific place. Even in the food industry, the accreditation of this badge is a certain indicator of expertise. Exploring the flavours of such culinary items found throughout India is an exercise in geography as well as gastronomy. Taking a look at such cuisine experiences that showcase the country’s rich identity:

The Bikaneri Bhujia of Rajasthan, a popular crispy snack among Indians, was designated as a Geographical Indication in 2010. This specific type of bhujia, which dates back to 1877, is a mixture of moth beans, besan, and spices with a peculiar pale yellow hue and fragrant flavour. This distinctive specimen of the very Indian snack takes its name from the town of Bikaner where it began and is popular enough to transgress amalgamating areas to emerge as a generic identity in itself.

Darjeeling Tea, often known as the Champagne of Teas, is a rich and fragrant combination of tea that is unique to the West Bengal areas of Darjeeling and Kalimpong. The first product in India to be given the Geographical Indication label in 2004, the status exclusively refers to tea cultivated at elevations ranging from 600 to 2000 metres above sea level, in 87 recognised gardens and tea estates in both of the state’s aforementioned districts.

The bandar laddoo or thokkudu laddoo is the most well-known sweet from the state of Andhra Pradesh. With its remarkably smooth and creamy texture, it may be difficult to realise that this specific sweetmeat is merely another variety of the besan ke laddoo that is popular across the country. A laborious six to seven-hour process yields these ghee-laden balls of deliciousness, which originated in Rajasthan but are now a staple of the city of Machilipatnam or Bandar, where it has been recognised as a GI product since 2017.

The Naga Mircha, one of the hottest known chilli peppers, is a product of the country’s north eastern region. With a sweet and slightly tart flavor, followed by slight undertones of woody, smoky flavors, this particular Nagaland chilli variant received the GI tag between April 2008 and March 2009 as the state’s first such recognised product.

Khaje, a centuries-old festival confection that is a mainstay of temple zatras and church feasts in Goa, is yet another delightful presence on the GI list of Indian gastronomy. Deep-fried traditional sweets of a state better known for its offerings of bebinca and feni, these are finger-sized sticks of gramme flour encrusted with ginger-infused jaggery and a dusting of sesame seeds. Mountain-high stacks of khaje are a common sight at fairs and festivals throughout the state, boasting a distinct flavour derived from its infusion of Goan ginger, local salt, and potable well water.

Srivilliputtur Palkova is a genuine Tamil Nadu sweetmeat that is pure milk bliss. Cow’s milk is cooked for hours on end over a slow wood fire to reduce it to the correct consistency before being sweetened with sugar. The quality of the ingredient is what distinguishes this specific sweet from the many other milk-based sweets popular in India. This region’s milk has a higher fat content, resulting in sweets that are naturally fuller in flavour. The natural saccharine content of it does indeed enhance the flavour experience. The milky yellow colour and smooth texture of this sweet that made its way to south India from the northern part of the country earned it the coveted Geographical Indication label in 2019.

Among the various sweets that West Bengal is famous for and that give the state its own flavour is the pretty distinctive Jaynagarer moa. A winter seasonal treat that provides for a decadent mouthful replete with the taste of date palm jaggery or, more often, nolen gur. Jaynagarer Moa was granted Geographical Indication status in 2015 and is a unique sweetmeat that incorporates Kanakchur Khoi as well as ghee, elaichi, and poppy seeds.

Chak hao or black rice, a glutinous rice variation from Manipur in India, has been designated as a GI product of India for 2020. Chak hao, which is fragrant and healthier than white rice, is notably popular in the northeast Indian state of Assam, where it is widely used, particularly in a variety of sweet recipes. 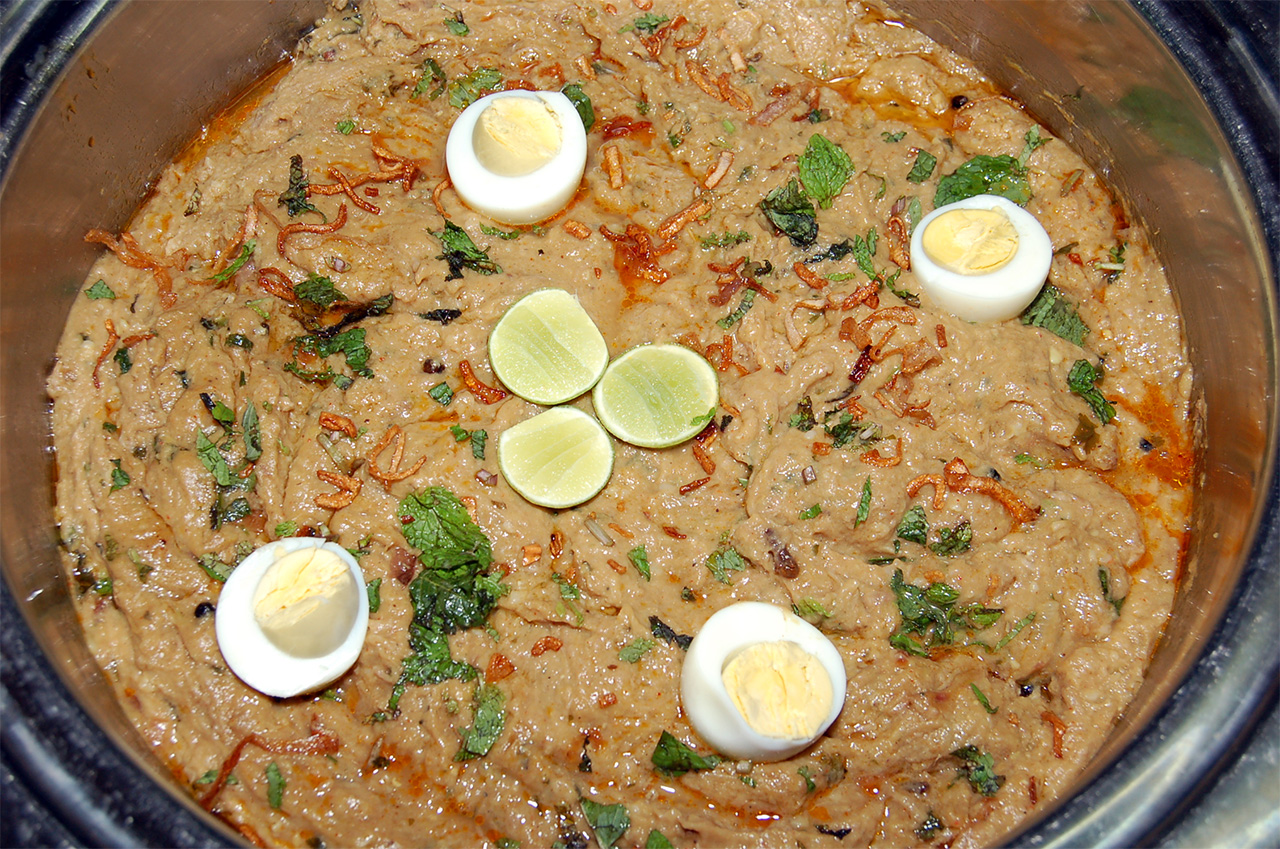 Hyderabadi haleem is the Indian variant of an otherwise Arabic cuisine preparation. It is the only meat-based dish with a Geographical Indication. The flavour and scent of the Hyderabadi recipe lends the meal its vast appeal, with an array of components ranging from meat and wheat to butter and milk to lentils and dried fruits and, of course, a large selection of spices. The Hyderabadi haleem, a mainstay at joyful gatherings as well as a meal often enjoyed as part of iftar and during Eid feasts, won the coveted position in 2010 thanks to its mind-blowing blend of flavours and taste.

The Dharwad peda is a sweet dessert native to the city of Dharwad in Karnataka. The delicacy, which has a history of almost a century and a half, is a delightful mouthful of milk, sugar, and dharwadi buffalo milk. This very popular Indian sweet got its GI status in 2007 with its trademark caramel flavour and also its tempting coffee brown hue, thanks to one Ram Ratan Singh Thakur who fled Unnao in Uttar Pradesh to come and establish down in Dharwad after a plague epidemic in the former.

Another new culinary addition to the Geographical Indication tag list catering to India is the Kovilpatti kadalai mittai, a really delectable peanut confection from Tamil Nadu. Originally prepared with palm jaggery and groundnuts formed as balls, the sweet is now a rectangular cut of sugarcane jaggery and peanuts. The use of fresh and pale, organic and distinctive Theni jaggery gives this mithai its distinct flavour. The usage of water from the Thamirabarani river, as well as local variations of its key components, adds to the peculiar flavour of this Tamil Nadu meal.

Betel leaves, which are native to the Indian subcontinent, play a vital role in Indian cultural traditions. However, Mysore has its own betel leaf variety known as the Mysore betel leaf or ‘Mysore Chigurele’ (Mysore sprout leaf). This kind of betel leaf, which was given Geographical Indication status in 2005, is distinctive in terms of texture and flavour. Grown originally in the gardens of the Mysore Maharaja, these betel leaves were known for their silky texture and spicy flavour, which is a result of the region’s soil attributes. The prevalence of black clay in the soil, along with the hot, humid environment of Mysore, gives this eponymous betel leaf its unique properties, befitting of GI classification.

The various delicacies of India that have acquired the Geographic Indication label feature a variety of religiously significant names. And one such name is the legendary Tirupati Laddu of Andhra Pradesh, which is revered as both a dessert and a holy sacrifice. The laddu is produced in the temple kitchen known as Potu from gramme flour, cashew nuts, cardamom, ghee, sugar, sugar candy, and raisins and served as Naivedhyam to Venkateswara at Tirumala Venkateswara Temple in the state. The offering of these laddus, which dates back to 1716, comes in three varieties. With an average daily production of 2.8 lakh laddus, the enormously famous treat was granted Geographic Indication status in 2009.

The sitabhog and mihidana, a renowned combo from the Bardhaman area of West Bengal combine for an appealing mix of sweetness. While sitabhog is a cottage cheese-based delicacy with a white and gritty look similar to pulao, mihidana is a rice flour and gramme flour-based dessert with a yellow hue similar to boondi pearls but smaller in size and stickier in texture. Both of these sweet dishes received Geographical Indication designation in 2017 at the same time, under the reign of Maharaja Late Mahatabchand Bahadur during British administration in India.

Tamil Nadu, like Andhra Pradesh, has its own sacred offering that has made it onto the list of India’s GI classified meals. That honour goes to the giving of Panchamirtham at the Palani Murugan Temple in the state, which was recognised in 2019. The panchamritam is a semisolid sweet tasting dish made of banana, cow ghee, cardamom, jaggery, and honey, with dates and sugar candies added for flavour. It is more religious than gastronomic in significance.

The basmati rice variety is perhaps India’s most popular GI tagged food product. Long grained and slender, and known for its fluffiness when cooked, this aromatic rice received a GI tag, making it cultivable only in the Indian states of Punjab, Haryana, Himachal Pradesh, Delhi, Uttarakhand, Western Uttar Pradesh, and Jammu and Kashmir.

Feni was the country’s first liquor to have its own GI label. It’s a coconut or cashew-based drink that’s linked with Goan identity and culture. Feni was initially produced in Goa in the 1600s, following the arrival of the cashew palm from Brazil by the Portuguese. In Goa, over 26 different types of feni are now produced.

This light-yellow, crunchy sev prepared from gramme flour and spices has an intriguing backstory. When Moghul rulers going through the Malwa area (now Madhya Pradesh) were unable to get wheat to manufacture seviyan (vermicelli), they urged the native Bhil tribe to create it with gramme flour. This ‘Bhildi sev’ is said to be the forerunner of Ratlam sev, which was first commercially produced in the early 1900s. Ratlami sev was designated as a GI in 2015.

It should come as no surprise that local people and scientists from various parts of India have been advocating for GI (geographical indication)-tagged culinary delicacies from their regions. Each geographical location has a significant influence on the cuisine/dishes of the area. Whether it is the naming of the dishes or the style of cooking, the location surely plays an important role in giving the food its identity.