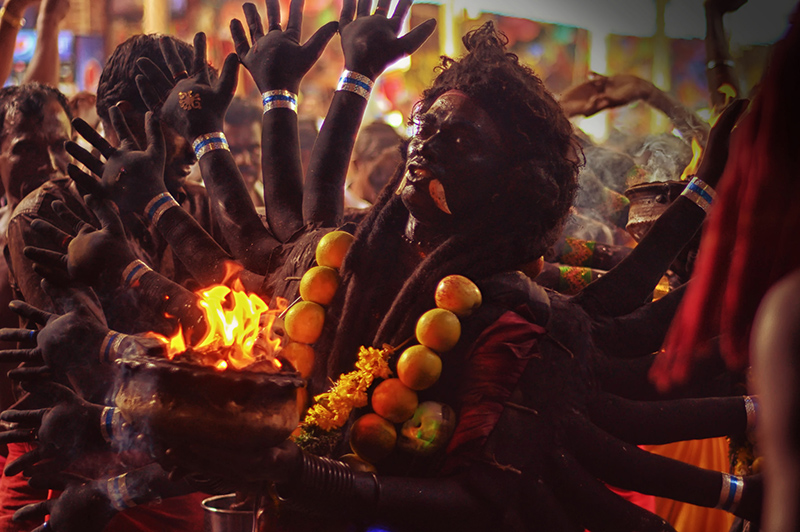 Vishal Rajendiran is a photography enthusiast who travels regularly across the country. Despite being a busy IT professional, Vishal loves to travel capturing the life of people in their natural environment. During last year’s Dasara festival, Vishal was in Tamil Nadu when he got to know about a different kind of a Dasara in Kulasekharapatnam. Vishal narrates his thrilling travel to this strange place through a photo feature –

Kulasekharapatnam or Kulasekarapattinam (aka) Kulasai, is a remote coastal town in Tuticorin district in Tamilnadu. Earlier, it used to operate as a minor port for pearl fishing and trading with neighbouring Sri Lanka. A 300 year old Mutharamman Temple resides in the town where a massive Dasara celebrations takes place every year. However, these Dasara celebrations are quite unique and outlandish!

As per the tradition of this temple, devotees are inspired to transform themselves as Goddess Kali, kings, monkeys, beggars, and have to beg in the streets of the town. Their collected money is then submitted as an offering to the presiding deity, Sri Mutharamman Goddess. Here you can see the various moments from start to end of the Dasara celebrations.

As soon as I heard about this event in mid-October, I decided to visit Kulasekharapatnam. I never had an idea that this trip was going to be unforgettable for the rest of my life. I traveled along with my three of my friends who were also avid photographers. We started our journey from Pondicherry towards Kulasai, which was more than 500kms away. While we were travelling in a bus towards Kulasai, we saw a bunch of people dressing themselves as Goddess Kali and begging on the roadside shops.

Finally after 10 hours of travelling from our starting point, we reached the place where we wanted to be, Muthumariamman temple. We saw young kids, ladies and men of all ages dressed up in diverse range of costumes right from Goddess Kali, Lord Shiva, gypsy, hunters, etc. Attracted by the colourful atmosphere, we started clicking pictures.

Suddenly we saw a group of men dressed as ferocious Goddess Kali dancing terrifyingly and walking towards the temple. We walked along with them holding back our fear and surprise, as we had no idea what was happening. As we approached the inner part of the temple, the devotees began dancing more vigorously and were in a state of trance. Fortunately, we were in the right spot to capture some of their raw emotions and we clicked some amazing pictures of the devotees who were in a ferociously possessed state.

Soon after that, we began to follow the devotees to see their end point towards the seashore, which was about 1 km away from the temple. Once we reached there, we could see hundreds of devotees who were literally in a possessed state do their final prayer and take a dip in the sea to end their journey. It was enthralling to see hundreds of devotees transformed as Kali who were all around us marching towards their climax. We took some shots till the sunset and left the place around 7.00pm. we surely we cannot forget those breathtaking memories in our lifetime!