Stepwell is an ancient scientific technique to store rainwater, that allowed usage at the time of drought. However, the medieval kingdoms that ruled the Indian subcontinent constructed these stepwells as a place of worship and social gatherings as well. Such fusion of science and culture is visible only in India, and we can experience this unique way of life by visiting these stepwells. Prolific traveller and stepwell documenter, Jatin Chhabra has visited the best of these Ancient Stepwells in India and recorded their historical value for posterity.

Unlike other stepwells, Agrasen Ki Baoli is a well-maintained stepwell site right in the heart of India’s bustling capital, New Delhi. This 60 meters long and 15 meters wide stepwell was originally built in 1132 AD by the legendary king Maharaja Agrasen. It was later rebuilt in the 14th century by the Agrawal community to provide a resting place for travellers, and even today, Agrasen Ki Baoli is a quite famous among tourists visiting of Delhi.

Agrasen Ki Baoli has a strange story tagged with it since 1970s. It is considered to be a haunted place and some claim that the water in this stepwell was black (currently it’s empty). The water had such negative energy that it could hypnotize visitors to commit suicide by jumping into the well.

Well, I don’t know if this scary story is true or not, but I did find out about a suicide incident that happened in 2007 when a man committed suicide by jumping in this stepwell. But today the site has security guards watching over the place that is filled with a large number of tourists visiting every day.

Neemrana was once an independent kingdom with enormous commercial potential and to provide shelter for its business commuters. The Maharaja of Neemrana built one of the deepest stepwells in India, the Neemrana Bawdi. Constructed in the 18th century, this stepwell is 500 meters long, built to provide water at the time of famine, and also a resting place for travelers.

Rani Ki Vav in Patan, Gujarat is the only stepwell that has gained the prestigious UNESCO World Heritage Site status. This stepwell is 27 meters deep and 64-meter wide, and is filled with 800 different sculptures of Indian mythology. The sheer dramatic look of this stepwell will give you a feeling that you are walking into an open-air art gallery.

Built in the 11th century, Rani ki Vav (means Queen’s Stepwell) was constructed by Queen Udayamati to honour her dead husband Bhima I, a famous king of Gujarat. This stepwell has a total of 4 platforms which have survived, and the final floor of the Vav is the main attraction as it has some of the best maintained sculptures that can captivate you.

Built in 1499 AD, the stepwell of Adalaj, known as Rudabai Vav, that has a tragic story behind its making. It is a beautiful stepwell constructed by a Muslim Sultan to fulfil his promise given to a Hindu widow, Queen Rudabai. The construction of this Vav was initiated by Rana Veer Singh who wanted to create a stepwell for his people who were suffering from drought. But sadly, Veer Singh was killed in a battle against Mahmud Begada, the Sultan of Gujarat. Mahmud Begada wanted to marry Rana Veer Singh’s widow wife Queen Rudabai, who put a condition that first the sultan needs to finish the work of the stepwell started by her late husband for their people.

Mahmud Begada was impressed with the queen’s concern for her people, and thus he agreed to this condition to build a beautiful Vav which today is an excellent example of Hindu-Islamic architecture. The Adalaj Vav has extensive carving work done on its walls, pillars, beam and many artifacts of plants, leaves, and flowers are carved out on its walls. Every corner of this stepwell is an example of stunning craftsmanship, but this never allowed the sultan to wed Queen Rudabai who refused to marry the Sultan and committed suicide by jumping in this stepwell! 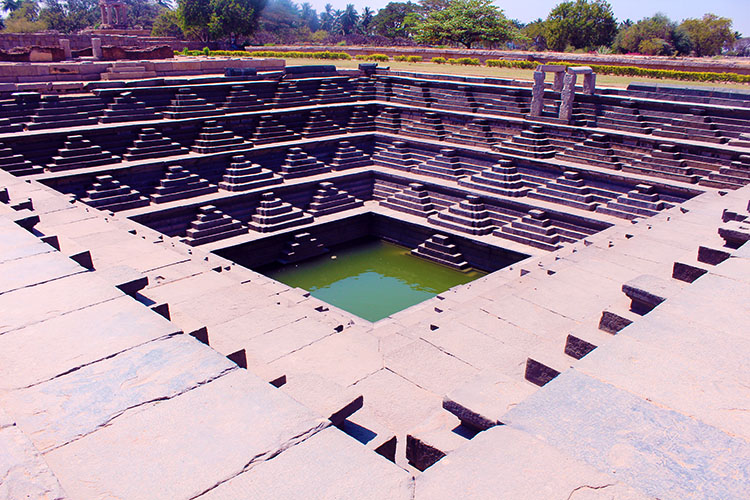 Most stepwells that I have seen in India are in the state of Rajasthan or Gujarat, since these arid regions face continuous droughts. But recently when I visited Hampi in Karnataka and I was surprised to see a stepwell here as well. In southern India, stepwells are referred as Pushkarani and are built alongside temples to store water used for religious ceremonies.

Hampi was once the capital of the Vijayanagara Empire, which has been described as one of the richest empires in the world. Hampi Pushkarani was built for the temple of Goddess Kali, but sadly, the temple was destroyed in a war which took place in 1565 AD, when the neighbouring kingdoms of Bahmani Sultans defeated the mighty army of Vijayanagara and looted Hampi. Thanks to the restoration work, the city of Hampi has been brought back to present its glorious history.