All those sports enthusiasts who love going to the stadiums to watch the game are secretly waiting for one other thing. No, it isn’t the popcorn and soda, it’s the “WAVE”. So basically a group of people get up from their chairs raising their hands up in the air, and quickly lowering them back and retiring back to their seats, then the group next to them repeats the same thing, this happens all through the stadium  making a wave sort of illusion. It is like a mass hysteria that takes over the crowd and suddenly everyone wants more. The social media too has its own version of waves. Every once a while there comes this huge surge of absolutely hilarious jokes related to one particular individual or incident and takes everyone by storm, something like the trending topics in twitter but this wave is everywhere right from FB, whatsapp, messages, tweets, memes and in some cases videos too. It is just impossible to ignore them; they are like an annoying Bollywood song that slowly grows onto you.

If you still haven’t understood what we are talking about then here it is plain and simple:

Do you remember those CID jokes? Almost everything from ACP Pradhyuman’s hand gestures to Daya’s antics were hilariously illustrated, and then came the ‘Thalaiva’ himself: Rajnikanth, this wave was more of a tsunami and the effects are still felt in a lot of places.

Today it’s all about Alok Nath, no one really knows how and why these particular characters suddenly get so much publicity but you can’t stop laughing your guts out every time someone forwards one to you. Have a look at these one-liners:

We found some really funny memes too.. 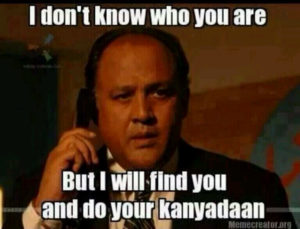 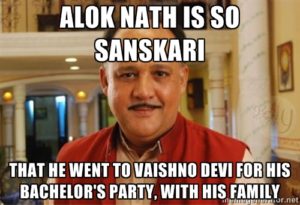 In fact it is not just about funny one liners and memes. These insanely creative people actually write a whole song.. Check these out:

Today, Neil Nitin Mukesh with his plural names is trending and Nirupama Roy with her soul wrenching sobs is soon catching up. Wonder whats in store tomorrow,  lets just hope that these waves never die down..