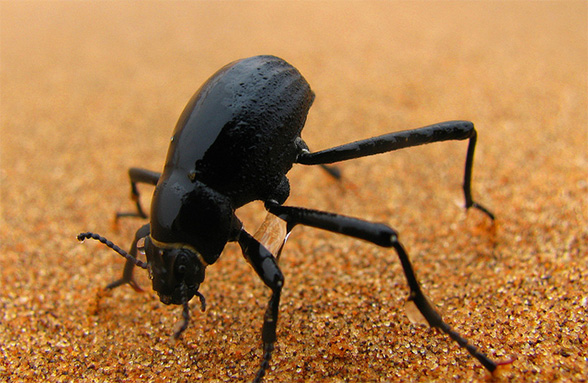 Materialising water in a desert

This animal antic is not for the faint hearted! The Namibian desert beetle has learnt to materialise water out of thin air! Onymacris unguicularis is a beetle found in the dry Namibian desert that has found the most unique way of procuring water. Early in the morning, when the dew enriched fog begins to settle over the sand dunes, the beetle goes to a dune peak and positions its body in such a way that it helps in dew formation. Microscopic bumps with hydrophilic (water attracting) tips and hydrophobic (water repelling) sides cover its hardened forewings, which it aims at oncoming fog each morning. Water droplets materialize out of thin air on its back, and slide down channels into its awaiting mouth. The smart beetle slurps up the drops of water thus formed.

Heard of the Aesop’s fable of a crow dropping stones into a water jar to raise the water level and drink it… Now, hear the modern tale of clever crows. The Japanese crows have found a new way of cracking walnuts. They pick walnuts from the adjoining trees on the road and wait until the traffic lights turn red. Then they place the nuts in the path of oncoming traffic. After the lights turn green, vehicles drive over the nuts, cracking them open. Then the crows join the pedestrians and pick up their meal. If the cars miss the nuts, the birds sometimes hop back and put them somewhere else on the road, or they sit on electricity wires and drop them in front of vehicles!

For those who think they have mastered their tools and have got their way through the money market, here comes some serious competition! Capuchin monkeys from Brazil have mastered the art of cracking tough palm nuts by using the best stones. The capuchins tap palm nut shells to make sure they aren’t empty – and are therefore worth the effort of cracking. If they think they have found a meal, they twist the nut until it comes loose, and then usually nibble away the soft outer covering until the woody shell is exposed. The monkeys use pits in logs as anvils, to lodge the nuts in place, while they use large stones as hammers to bash through the shells. Researchers have found that these monkeys select just the right stone and an appropriately sized pit as an anvil for nut-cracking. Now, if you think this is no big deal, Scientists from Yale University have found that capuchin monkeys can trade coin-like tokens for food items! The group of capuchin monkeys even appeared to grasp the concept of ‘bargain hunting’ by flocking to lower-priced pieces of fruit!

Wild animals may adapt to their environment using ingenious ways; while domesticated animals learn the ways of humans. However, the Honeyguides of Africa have innovated a way to use humans to suit their purpose! The Honeyguide feeds primarily on the contents of bee hives: bee eggs, larvae, pupae, and beeswax. Honeyguides are among the few birds that can digest wax. Honeyguides enter beehives while the bees are torpid in the early morning or scavenges at hives robbed by people or other large animals. Most remarkably, they also guide people to beehives to access their food. A guiding bird attracts a person’s attention with wavering, chattering notes and flying toward an occupied hive. If the followers are native honey-hunters, when they reach the hive, they incapacitate the bees with smoke and open the hive with axes. After they take the honey, the honeyguide eats whatever is left.