Are you a Hindu liberal?

Are you a Hindu? Do you consider yourself as a liberal? So are you a Hindu liberal? What is it about “Hindutva” that is un-secular or un-liberal? Can you lead a Hindu way of life and still mingle easily with your secular friends? Why should anyone get to call a Hindutwavadi a “Hindu-Taliban”? Pertinent questions for any Indian who is concerned about our ever-evolving constantly transforming society!

Ashwini, a well traveled liberal poses these questions on the Indian Republic, a popular news portal. Ashwini begins with defining the term ‘liberal’ as applicable in a global context. Then he moves onto defining what exactly is ‘Hindutva’. This reminded of the earliest attempt made by the renowned philosopher and teacher, S Radhakrishnan in his book, “The Hindu View of Life” way back in 1926.

Radhakrishnan wrote, “The challenge of Christian critics impelled me to make a study of Hinduism and find out what is living and what is dead in it. My pride as a Hindu, roused by the enterprise and eloquence of Swami Vivekananda, was deeply hurt by the treatment accorded to Hinduism in Christian missionary institutions.” Today in the post-modern context, when everything is irreverent and everything is questionable, it is high time to make an attempt to define Hindutva and come terms with it. Read on…

Who is a liberal?

A quick Wikipedia search will show you that the idea of liberalism is based on two concepts – liberty (the right of individuals to control their own actions) and equality (self-explanatory). I call myself a liberal because, like most liberals, I believe in: 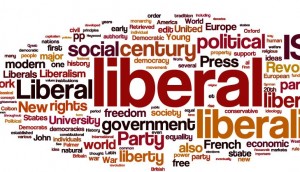 Hindutva, not to be confused with Hinduism-the religion, according to the Supreme Court, is “the way of life of the Indian people and the Indian culture or ethos” and is “not to be equated with or understood as religious Hindu fundamentalism”. The same Supreme Court judgment ruled that it is a fallacy to infer that the use of the word “Hindutva” per se depicts an attitude hostile to all persons practicing any religion other than the Hindu religion.

The vilification of Hindutva by pseudo-secularists

What is it about “Hindutva” that is un-secular or un-liberal? Why should anyone get to call a Hindutwavadi a “Hindu-Taliban”? One argument often cited by pseudo-secularists is that Hindutwavadis seek to establish a “Hindu-rashtra exclusively for Hindus (those practicing Hinduism) at the expense of Muslims/Christians and other religious minorities.”

This argument is ridiculous on so many levels. To start off with, the word “Hindu” in this context does not mean a follower of Hinduism-the religion. In fact, Veer Sarvarkar, the freedom-fighter who coined the term “Hindutva” was a rationalist and defined the term to mean “any patriotic inhabitant of Bharatvarsh (India)”. (Source: Savarkar, Vinayak Damodar: Hindutva, Bharati Sahitya Sadan, Delhi 1989 (1923)). Besides, this school of thought had its roots during the time of the British rule of India and the notion of a “Hindu rashtra” was in contrast to a nation of Indians being ruled by the British – which was what India was under British rule.

What are the key issues championed by the Hindutvawadis?

The key issues championed by the Hindutvawadis are:

Is there any merit to the issues that Hindutvawadis take up?

Uniform civil code – When people claim to believe in equality of all people irrespective of religion, race, caste and gender, shouldn’t it be a no-brainer that all people of India should follow the same set of laws? Yet, India has a different set of personal laws for Hindus, Muslims and Christians. The rules and laws governing Hindu marriage, Hindu divorce, Hindu inheritance and Hindu adoption are different from the rules governing Muslim marriage, Muslim divorce, Muslim inheritance and Muslim adoption. And yet, Sikhs, Buddhists and Jains have to follow the rules governing Hindus. Does this make any sense at all? Does it make sense for the government to allow a Muslim to marry twice but to prosecute a Hindu or a Christian for doing the same? Doesn’t this put the term “equality before law” to shame? What would a liberal say?

Abolition of article 370 – Article 370 of the Indian constitution accords a special status to the state of Jammu and Kashmir. It implies that except in matters pertaining to Defense, Foreign Affairs, Finance and Communications, the Central government cannot make any laws that apply to the state of Jammu & Kashmir without the State Legislature’s concurrence. Therefore, the residents of the state of Jammu and Kashmir live under laws that are different from those applying to the rest of India. I don’t know how this sounds to you, but it sure sounds pretty ridiculous to me.

Ram temple at Ayodhya – I am not really a practicing Hindu and don’t remember going to a temple to pray in the last year or so. Yet, I believe that all religions are equal and should be accorded respect. Therefore, I find it very strange that Hindus don’t get to have a temple at Ramjanmabhoomi in Ayodhya- one of Hinduism’s most sacred sites. Whether Lord Ram was indeed born in Ayodhya or not is immaterial here since religion is about faith and belief rather than anything else. Most Hindus believe that Ayodhya is the birthplace of Lord Ram and their beliefs should be respected. What is wrong about having a place of worship at a place that is considered sacred by almost a billion people? Wouldn’t it be strange if Jerusalem did not have a Church or if Mecca did not have a mosque? So, why should Ayodhya not have a temple?

So, am I a liberal or a Hindutvawadi?