Can Cartoons be Weapons of Political Activism?

The months of Emergency were the darkest times in Indian history, in more ways than one. Human rights were suspended and public liberty was at the mercy of an autocratic government. Censor officers were positioned in the editorial offices of magazines and newspapers to prevent any material, which could be deemed as critical of the government from being published. On June 28 1975, the Delhi edition of the Indian Express carried a blank editorial in protest. The Financial Express printed the poem of Rabindranath Tagore, ‘Where the mind is without fear and the head is held high’.

The Emergency threw India into a state of chaos and paranoia. It was in this eerie hush that Abu Abraham, one of the most celebrated cartoonists of India, asked with his trademark acerbic wit, “Don’t you think we’ve got a lovely censor of humour?”

In a press conference during the Emergency, the Information & Broadcasting Minister, V. C. Shukla stated that censorship was needed ‘to stop the spread of rumour’. Abu Abraham’s irreverent and sharp retort, which became a legend in itself, was “But why do you want to stop the spread of humour?” And in just a few days, the Prime Minister’s Office announced that cartoons need not be submitted to the censors anymore.

It was not only during the emergency period, however that the political cartoons played a vital role. During the formative years of the nation, cartoonists had played a major part, poking fun at the national leaders and their policies, stars and starlets, corporate magnates, godmen, the underworld’s seedy characters and even the common man – nobody escaped the stinging strokes of their wit.

“Don’t spare me Shankar”, Jawaharlal Nehru had once remarked when Shankar Pillai, the father of Indian cartooning, had depicted Nehru, tired and gaunt, competing in the last leg of a race while holding aloft a burning torch. Similarly, stark was an Abu Abraham cartoon, drawn during the era of caste vote-bank politics. Playing on the slogan ‘Cast your vote here’, it said ‘Vote your caste here’ – a truth so stark, that it has remained true even decades later.

Which icon has embodied the sentiments of the people as effectively as R.K. Narayan’s ‘Common man’? With his coat and dhoti, his slightly weary but hopeful expression, this emblematic character has come to represent an entire nation. The common man is a silent spectator of the antics of the rich and the famous, with a ringside view of the political tussles, but helpless to effect any change. He mirrors the feelings of most Indians, and hence strikes a chord with commoners. 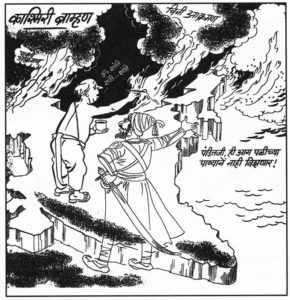 It is not only the caustic tones that cartoons take. Bal Thackeray, a mild-mannered cartoonist with few claims to ambition went on to establish a political party that became one of the cornerstones in the rise of regionalism. His cartoons, which were earlier critical of the government and deeply incisive, took on the form of war propaganda, when he resigned from his job began publishing his own magazine ‘Marmik’. His magazine gained firm footing among the middle class and lower class Maharashtrians, which fuelled the rise of distrust against immigrants from other regions of the country. What started out as a magazine, morphed into a movement – Shiv Sena – an aggressive political party that doesn’t take no for an answer!

One of the recent controversies involved Aseem Trivedi, a cartoonist with average talent, but deep rooted rage against injustice. Although his cartoons don’t have the evocative grace of Laxman or the subtlety of Mario Miranda, Trivedi was arrested a year ago on the charges of sedition and disrespecting the national emblem. Trivedi’s arrest came on the heels of the Lokpal Bill movement, and inspired a rash of protests across the country.

Cartoons speak aloud what the editorials can’t say, despite their verbosity. Pithy, precise but laconic, they put their finger on the crux of the problem. I feel cartoons are concise political commentaries in themselves, instead of being peripheral embellishments of editorial pages. Cartoonists, I believe, can bring the most powerful men and women of the country to their heels. With just a few strokes of their favourite 2B pencils, cartoonists reduce them to their caricatures. If the pen is mightier than the sword, then the pencil is mightier still!