Great Green Ideas are emerging from India that can be replicated across the country. Sustainable development is no more a buzz word among policy makers and activists; it is the underlying theme of every new jugaad innovated in the rural parts of the country.  Here are some additions  to the growing list of simple yet innovative ideas that are not only eco-friendly, but also are economical. This is in continuation of our Eco-friendly Ideas from India  series published earlier: 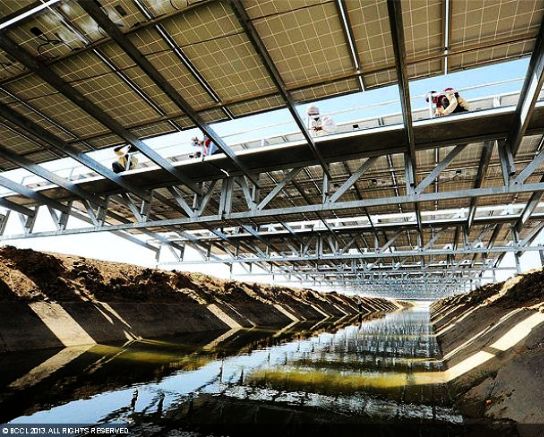 Problem – Solar power is abundantly available across India, but tapping this energy for power is a difficult task. Apart from the high cost of solar photovoltaic (PV) panels, availability of land is another issue. While many people suggest that vast stretches of barren land can be utilised, connecting the harnessed power to the electric grid is difficult. Meanwhile there is another problem of water evaporation in ponds and canals during summer.

Solution – Building a solar PV power plant on top of a water body not only would prevent evaporation, but also would utilise the land in the best possible manner. The Gujarat State Government took the lead in creating such a novel project on the Sanand branch canal near Chandrasan village of Mehsana district. US-based Sun Edison built the 1 MW solar power plant at a cost of Rs.17.5 crore for the Gujarat State Electricity Corporation Ltd. Set up over a 750 meter-long stretch of the canal, the plant generates 16 lakh units of electricity and prevents evaporation of 90 lakh litres of water from the canal per annum. 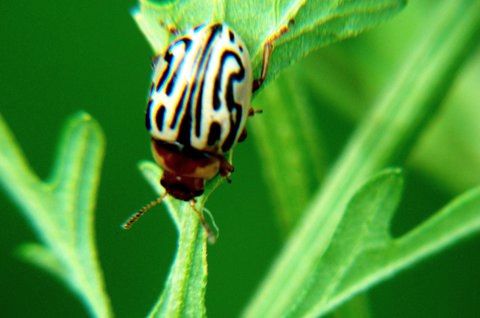 Problem – Controlling weed plant growth is an onerous task for farmers, but some invasive species such as Parthenium, Eupatorium, Lantana and others have become unmanageable. Particularly, Parthenium hysterophorus has prolifically spread across the country after its accidental entry into India through food aid sent during late 1950s. Manually plucking out these weeds is not feasible since they drop thousands of seeds which germinate soon. Chemical spraying is a not considered due to high costs and toxicity.

Solution – Biological control of weeds has emerged as a sustainable idea that eliminates weeds without harming other plants. Since Parthenium came from Central America, a type of Mexican beetle known as Zygogramma bicolorata was introduced in India. These Mexican beetles wither the plant by steadily devouring its leaves. However, the initial release of was not successful in controlling Parthenium due to its perennial growth throughout the year. Several augmentative releases were required to build up the insect population in sufficient numbers. Eventually, along with the propagation of another plant Cassia sericea, the Parthenium menace has been drastically reduced. 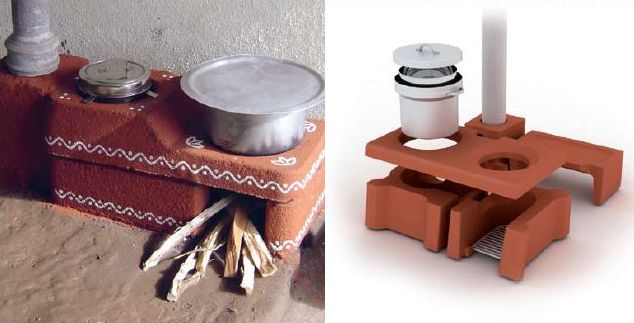 Problem – For millions of low-income people in rural India, firewood is still the primary fuel for cooking. Their stove (chulha) is a pile of stones heated by burning wood or cow-dung in their kitchens. However, this inefficient stove consumes a lot of fuel and emits thick smoke and soot. The smoke may cause acute respiratory diseases and eye infections. While these stoves are built under a chimney to ensure that the smoke rises naturally, much heat is lost due to inefficient design.

Solution – The Philanthropy by Design, a unit of multinational company, Philips joined hands with the Appropriate Rural Technology Institute to create a stove that does not pollute. Developed by combining creative skills with local insights, the Low Smoke Chulha drastically reduces smoke and increases fuel efficiency. The Chulha is a simple, modular concrete-block cooking stove covered in brown clay. It features two potholes: one for circulating hot air for steamed foods, and the other for heating flat pans. The Chulha’s chimney fitted with a special filtering device made of slotted clay tablets to trap toxic soot particles. This innovation is an upgrade on the ASTRA fuel efficient wood stoves developed by Indian Institute of Science way back in 1980s.

Problem – During the blazing heat of summer, we realise the value of tree shade. Tree cover in urban areas is so minimal that we experience heat pockets in congested locations with a drastic rise in temperature. A tree-lined avenue not only brings down the temperature, but also provides shelter for birds. However, the shade given by trees is not uniform, which forces us to erect a canopy for proper shade.

Solution – Hyder Ali Khan, alias ‘Green Pandal Khan’ of Mysore has innovated a tree weaving technique, which creates a pandal (canopy) of leaves to provide uniform shade across a large open space. He plants saplings at regular intervals and grows them straight to around 8-10 feet, while trimming the unwanted branches. Once they attain a certain height, he bends and intertwines the branches of one tree to another to create a vineyard kind of canopy. He first implemented his idea at the Idgah Maidan in Mysore, where he planted around 300 Honge (Pongamia) saplings and nurtured them for 12 years to create a lush green canopy of 1,000-feet length and 350-feet breadth. Hyder Ali Khan has now implemented his green canopy idea across various temples and schools using Honge and Singapore Cherry trees.