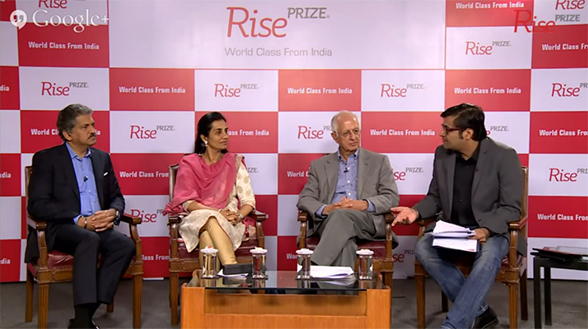 I was watching this interesting conversation between Anand Mahindra, Chanda Kochhar, Arun Maira and Rajan Anandan about how to make “’India – the next innovation superpower”. This Google Hangout webinar was organised by Mahindra Rise and was moderated by the infamous Arnab Goswami, who actually allowed his participants to talk!
While Arun Maira was of the opinion that an ad hoc ingenuity done frugally and swiftly to create a makeshift arrangement (Jugaad) cannot make India the next innovation superpower, Anand Mahindra felt that there must be a distinction between ad-hoc ingenuity and process driven innovation. Mahindra said “Frugal innovation is good, but we need to move from Jugaad to Jhakaas!”

That made me wonder, what is this Jugaad and why has it become such a buzzword in the Indian corporate world? I suppose the authors of the recent “Jugaad Innovation” are to be blamed for the surge in popularity.  By definition, Jugaad is a colloquial Hindi word that can mean an innovative fix or a simple work-around, sometimes pejoratively used for solutions that bend rules, or a resource that can be used as such, or a person who can solve a complicated issue. The term ‘Jugaad’ finds its roots in the Sanskrit word ‘Yukti’ which has been corrupted in Indian languages, roughly translating to “overcoming inconsiderate constraints by devising an efficient solution using limited resources”.

Examples include the Jugaad vehicle contraption popular in North India, the Mitticool refrigerator in Gujarat, or the Osho Chappals in Maharashtra.

There are two streams of thought on this Indian innovation –

One may call it as, ‘Indian style of creative ingenuity’, other may say it’s just an “crooked makeshift solutions”. Whatever you may call, Frugal innovation is a burning topic today as post-downturn business-oriented start-ups and companies seek ways to produce more, while keeping an eye for affordable inputs. This requires practicing the gutsy but enterprising art of frugality. Innovative, inventive, and ingenious, a Jugaad is probably has a key to all locks. All and sundry in India yearn to find a Jugaad an an option to solve a tricky problem. One can even have a broader perspective, like we do, and call it as “an art of creative improvisation constrained in a framework of profound knowledge and experience”. Seems quite interesting! Right?

Why Jugaad is a promising alternative?

The spirit of Jugaad is incarnated in the aptitude to work with limited available resources, nevertheless, also building something germane and valuable. It also personifies a spirit of clever impudence that commemorates workarounds, quite often at the expense of established and well-settled structures. When Napster came by the side of the viral populace, they over lied “peer-to-peer” sharing on top of customary digital infrastructure as well as thumbed their noses on the big music labels. Western corporations are lacerating multi-billion dollar R&D budgets, crowd sourcing research projects globally, and tasking teams to turn up with innovations quicker.

They are being skilled to apply Jugaad ideologies, which may be anticipated as a kind of bottom-up approach which involves just about rebuilding the product for the target-market. A live example running on streets around you is the $3,000 Nano car made by Tata Motors in India, which was developed from the bottom-up to put together an inexpensive car for an average middle-class Indian. The whole structure revolves around various Jugaad innovations from the Indian streets themselves. Hence, Jugaad is perhaps a promising alternative when it comes to cost-effective solutions, primarily focused in bringing up an inexpensive, eco-friendly (at times) and profitable product.

Psynergy whose music is written, composed and produced by Tao Issaro is a collaboration of various artists who come together for a singular cause.
Read more
Nostalgiphilia

A postman, delivering all kinds of messages, had found a significant place in the lives of people back then. But with time, he too faded into oblivion.
Read more
Eco-Ideaz

To see butterflies fluttering flights, you don’t have to wake up early with the birds. They are cold-blooded animals which means they cannot generate their own heat and need sunlight to warm their body. You’ll get to watch them basking late in the morning.
Read more
Eco-Ideaz

Indoor plants are not that hard to maintain like the plants that you grow in the garden. Here are a few plants that you can keep in your bedroom or living room.
Read more
Art & Culture

During Uttarayan, a manja maker prepares about 100-250 charkhis every day for kite enthusiasts participating in the International Kite Festival in Ahmedabad
Read more
Art & Culture

Thanks to globalization, the Indian tradition of Mehndi art had found its way into the Western culture.
Read more
Caleidoscope-Blog

Banana leaf technology is a cellular eco-friendly technology that preserves leaves and organic biomaterials for a year without the use of any chemicals. Naturally, leaves and most biomaterials degrade within a shelf lifespan of three days and are discarded as waste.
Read more