Odanthurai Powers Ahead with Entrepreneurial Zeal

Global warming, depleting natural resources, increasing carbon emissions, soil and water pollution; these are some of the issues that have become a major concern for countries across the world. While I was wondering how to change the present world which is filled with pollution & rapid development, I happened to visit a village with a difference rather filled with lush green.

As a part of my renewable energy field trip, I visited a village called Odanthurai Gram Panchayat situated 40 kilometers north of Coimbatore in Tamil Nadu. In a country where villages are still struggling with inadequate power supply and expect the government to fix the problem, Odanthurai has set an example by producing its own green power for its needs. We met the panchayat president Shanmugam who explained the details about his village’s clean energy sources.

The most notable among Odanthurai’s self-help ventures is the 350-kw wind power generator that it set up in 2006 under the direction of a well functioning gram panchayat. Having witnessed the government help many private companies acquire land in Coimbatore district at subsidized prices for setting up wind power projects, the enterprising Shanmugam thought, “Why not have a wind power project under panchayat ownership? After all a village community is the most legitimate owner of land and wind, the two natural resources that are enough for power generation.” 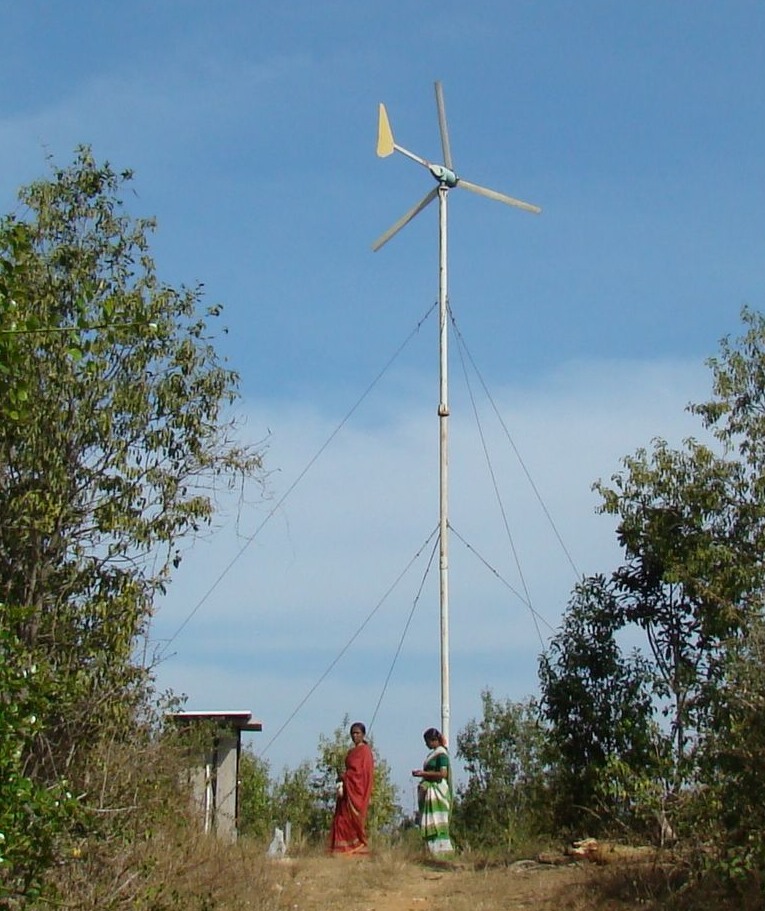 The economics of green power

Shanmugam worked out the costs; a small wind farm would cost Rs.2.3 crore. Odanthurai could generate Rs 35 lakh as down-payment for a bank loan. With the government support, the panchayat would need a bank loan of Rs 1.15 crore. The gram panchayat liked the proposal and gave its collective seal of approval. This one-of-its-kind proposal took the district administration by surprise. It was hard to imagine a panchayat could aspire to be as entrepreneurial as a private company. The state government sanctioned the project under the Remunerative Enterprises Scheme. Commissioned in 2006, the project became the first ever power project undertaken by a local body in India.

The wind-farm in the Odanthurai generates 7.5 lakh units of electricity in a year. While the panchayat’s need is only 4.5 lakh units, the remaining power is sold to Tamil Nadu Electricity Board, fetching the panchayat an annual income of Rs. 19 lakh. “After repaying the bank loan of Rs. 1.15 crore over seven years, the cost of generating electricity will be virtually zero,” beams Shanmugam.

Odanthurai Panchayat has made inroads in other renewable sources of energy as well. It has installed a 9kW biomass gasifier power generation system to substitute the grid electricity for pumping drinking water supply. The biomass gasifier system saves about 70% of pumping cost when compared to grid electricity (see table). Other renewable energy projects underway are solar street lighting and biogas using human and cattle excrement. The biogas system is connected to each house for cooking purpose, which helps to reduce firewood usage. The panchayat is purchasing waste wood pieces from a saw-mill in the village at low price of Rs. 0.3/kg ($6.7/ton) for the fuel of the gasifier. Low demand for waste wood for cooking purposes might have contributed for very low price. The village has found that total energy planning rather than just electrification can improve the efficiency.

Comparison of operational cost per unit for the power system of Odanthurai Panchayat:

Incredible Historical Places in Tamil Nadu For An Experience of a Lifetime!

The Exhilarating Experience of Trekking in Tamil Nadu!

Ten Dishes in Chennai Food That You Simply Must Try!