We human beings are literally beginning to choke on our own plastic consumption. Plastic polymers are used in food wrapping, baby bottles, beverage containers, food containers, shopping bags, children’s toys, house  appliances, computers, cars, and even in clothing. Plastic is a relatively cheap, durable, and versatile material. Resistant to moisture, chemicals, and decay, it has found many uses and has replaced many materials in existing products!
Being a non-biodegradable substance, Plastic is a major toxic pollutant which pollutes the earth, air and water. It should not be allowed to be dumped in landfills. Burning plastic waste will bring disastrous effects to the environment! Recycling plastic is the most practical solution to get rid of plastic waste, but this too is turning out to be more of a myth!

According to a nationwide survey conducted in 2003, more than 10,000 metric tons of plastic waste is generated daily in India, and only 40% of it is recycled. Plastic waste contributes to the solid waste streams by about 8-15% by weight and twice that by volume. The annual post-consumer plastic waste volume reached 3.6 million tons in 2005-06. At these alarming levels of waste generation, India needs to prepare for a lot of recycling. Several processes have been attempted till now; however, each process had its drawbacks and economical and financial limitations for practical implementation.

A large proportion of thin sheeting materials and moulded parts, plastic bags are not collected by rag pickers. These small bags /mouldings are soiled and are difficult to clean and they have no value as recycle feed stocks. This unutilized plastic waste remains uncollected and is littered in garbage dumps, often resulting in choking of municipal sewers and storm water drains.
To recycle plastic, for the first time in the country, Prof. Alka Zadgaonkar and her team in Nagpur have done significant work to dispose waste plastic material and thereby convert it into hydrocarbons.

All plastics are hydrocarbon polymers containing carbon and hydrogen and few other elements such as chlorine, nitrogen etc. When a long chain of hydrocarbon monomers breaks at certain points, it is known as degradation of polymer. This is the reverse of polymerization and when such a process occurs randomly it is called as ‘Random De-Polymerization’.

In Zadgaonkar’s process petrol from plastic waste, random de-polymerization is carried out in a specially designed reactor without oxygen and in the presence of coal and certain catalytic additive. The maximum reaction temperature is 3500C. Thus, there is total conversion of waste plastic into value added fuel products. 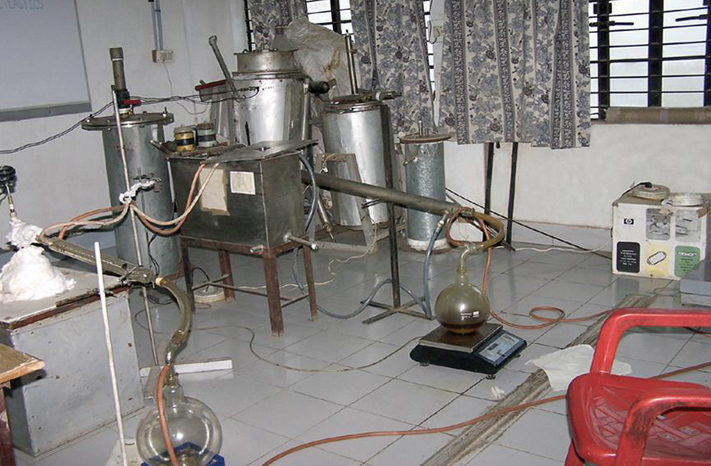 This innovative process involves degradation of waste plastic using proprietory ‘catalytic-additives’ invented by Prof. Alka Zadgaonkar and is different from the generally existing pyrolytic processes. The laboratory scale set-up was developed in batch mode in which specific as well as mixed plastic materials were successfully converted into fuels. The products and by products obtained in the process are liquid hydrocarbons, gas and residual coke.
The products of the process
The fuel oil product is a sulphur free equivalent of industrial crude. It can be readily used in furnaces or put through fractional condensation to obtain finer grades like petrol. The gas obtained is a LPG equivalent, which can run a modified genset to generate electricity. This is now standard practice at a Zadgaonkar plant, which is self sufficient for its power. The final remains are a solid fuel called petroleum coke.
Prof. Alka Zadgaonkar and her husband Umesh Zadgaonkar approached the Indian Oil Corporation for commercial production. But after years of delay, they were frustrated and tried other options. With complete faith in the techno-economical feasibility of her invention, Prof. Alka Zadgaonkar decided to go ahead on her own and approached State Bank of India for financial assistance for creating a commercial plant.
The Zadgaonkar couple are currently running a 5 metric ton plant in Nagpur and their fuel is used for running captive power generators in industrial units in and around Nagpur. This invention surely inspires others to develop simple and economically viable technologies for environment friendly disposal of waste plastic.