Natural disasters, otherwise known as ‘acts of God’, have known to cause irreparable damage to human life. In the last few decades, India and the world have faced major environmental problems such as global warming, rising food prices, growing water scarcity, falling groundwater tables, water pollution, biodiversity loss, soil degradation, etc. Our concern about such issues has provided ample material for many filmmakers. In the last 20 years, a few commercially successful fiction and non-fiction movies on the environmental issues have been made by Hollywood directors.

One such attempt is “Voices of Transition”, an independent documentary film by French filmmaker Nils Aguilar, which really goes a long way in us questioning our own individual contributions towards our ecology and eventually to our society. The film starts with a voiceover by renowned environmentalist Vandana Shiva speaking about world food prices and how the global economy is controlling local poor economies. The documentary sums up various issues faced by many countries all over and the issues that are discussed in the documentary. 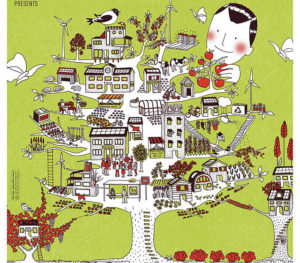 The WTO, IMF and the World Bank have been partners in managing the global economy and their policies are endorsed by economically dominant countries. Their neoliberal policies have been known to cripple the weaker economies. On the other hand, we have MNCs that use various means to control the world economies and resources. This grim situation forms the backdrop for the many transitions that the movie puts forth.

One line in the movie that really made me reflect is “if you are always running after something, you never see the end”. Over the last few decades, we have been concentrating our efforts on maximizing our food produce and have lost track of the processes or ways to achieve the end. Voices of Transition makes us reflect on our means and their long-term consequences. The documentary depicts who researchers who are fearful of a future where our dependency on crude oil, which leads to fluctuation in price and shortages of supply and to non-renewable seeds under monopolistic MNCs will lead us to the gradual destruction of soil and the eventual food loss.

The documentary film takes us through the experience of many farmers, agro-engineers and soil microbiology experts who speak about the failure of the Green Revolution over the years and how chemical fertilizers have killed the organic matter of the soil and eventually making it inert. Multinational firms control more than 50% of the commercial seed market and their business model is based on “patenting living beings and licensing non-renewable seeds”. Industrial agriculture is responsible for 40% of the global greenhouse gas emissions.

The film shows us the various ways in which transitions as argued in the film are possible and provides us details of such examples of France, the UK and lastly Cuba. Many solutions like agro-forestry, forest garden system, policy changes etc are advocated in many parts of the film.

In France, we see the issues of soil depletion, high yielding seeds and industrial agriculture due to the related effects of green revolution and MNCs. Monoculture and chemicals promoted by the MNCs in turn cause more environmental problems. Many French farmers have turned to organic farming to solve their issues. Organic farming also seems to offer solutions to farm produce pricing, since farmers do not get enough help from their government. Change in farm policies is a solution suggested in the film.

In England, we see the examples of agro-forestry and forest garden systems as solutions. An independent activist, Rob Hopkins speak on a where the disaster is able to spread out and eventually taken care of. I especially liked the part where he speaks of the transition culture that he co-founded – Transition Town Totnes and Transition Network. The success of such organizations offer enough hope for our collective future. This alternative viewpoint was an eye opener of sorts. Looking inwards and making ourselves stronger within. Becoming more practical and communicating with our environment can only enrich our lives!

Cuba’s example of achieving food autonomy and how it has achieved both the UN criteria for high levels of human development and the WWF criteria for a balanced ecological footprint are truly amazing. Cuba fought the “peak oil” crises and became an organic society in a self-sufficient and community-oriented manner.

At the deepest level, this documentary makes us question the accepted approach of our times where we fail to see the benefits of the traditional methods and are blindly guided by what the IMF and World Bank propose. A sense of community needs to be built over time, which will see us through – this is the transition that is needed. A major statement made by the movie that makes us question what we have been accepting for decades is, “The rules of WTO are incompatible with the principles of food sovereignty”.