There is no one way to explain the city of Bangalore, now referred to as Bengaluru; right from the time it was christened, it has been a multi-cultured, multi-ethnic and migrant city. Beginning from those Arab horse traders and barefoot citizens in a chariot procession during the British Raj to the present millions landing to find an IT/BPO job, this city has been an amalgamation of cultures and geographic diversities. This diversity has invariably left Bangaloreans in a constant state of evolution; if you look hard enough it is easy to find a typical Bangalorean; all you need is a little skill and lots of humour. 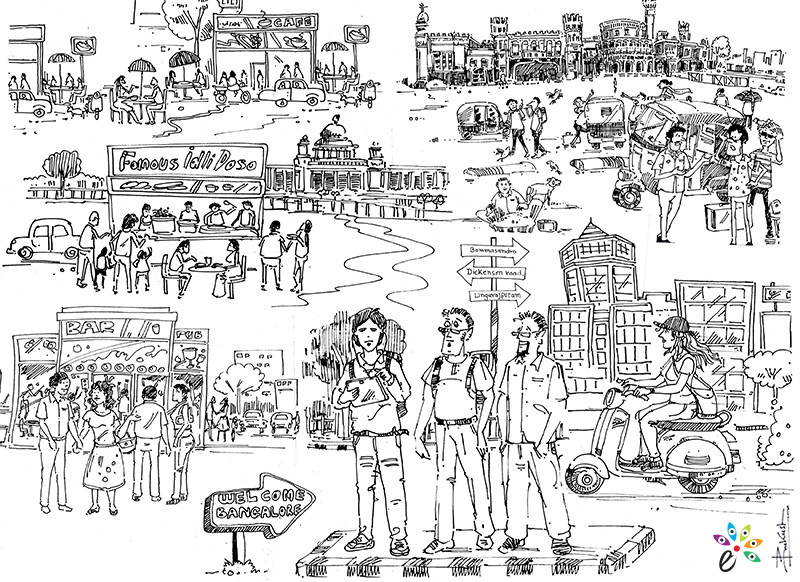 Bangaloreans are proud people; they love talking about the awesome weather of their city and the horrific tales about the traffic jams. That would be your first clue. If your neighbour’s chest inflates and become breasts while talking about the weather, then, you can be 100% sure that you have found “THE ONE”. Once you’ve spotted them and know that you have to interact with them then, remember that a Bangalorean doesn’t find ‘Bommasandra’, ‘Dickenson Road’, ‘Lingarajpuram’ and ‘Cox Town’ funny! These are real places in the city, which you will visit them quite often.

“Uuuuuuuu” is their favorite suffix; Bangalore has just become Bengaluru and almost every word in every language find itself followed by the famous uuuuu… for example: busu, caru, trainu, orderu, etc. Try asking someone for directions, the reply would be something like: “strrraaaighhttt hogi, aamale lefftttuuuuuu matthe rightuuu”. The length of the uuuuuuuuu should help you determine how far ahead you need to travel.

A typical conversation with your ever friendly Bangalore neighbour would like this:

You: Hi Aunty
Aunty: Hello, how are you? Where are you from? What do you do?

You: Oh is it? What does he work on?
Aunty: That and all I don’t know ma… Something he works and comes home verrrrryyyyy late at night… It is a big company you know…

You: where is his company?
Aunty: How do I know… he keeps jumping jobs every six months!

I can guarantee that out of your 5 neighbours, at least 3 would have the same questions and same replies.

Bangalore is probably one of those few places in India where you’d find the bar crowded at 7:30 pm and empty at 11:30pm. Yes, Bangaloreans got tired of everyone cribbing about the dreaded 11:30pm deadline for pubs, so they just decided to drag everyone along and hit the pub at 7:00pm instead.

If you’ve been in Bangalore for a while, then you would have given up on predicting the auto rikshaw fares or the weather. Auto Rajas have unanimously decided to surprise us with their fares; it’s almost like playing housie, you can never guess which magic number they will come up with. But never try to act smart by insisting on paying by the meter; Auto Raja will take you for a ride across the town and you will empty your wallet to pay the meter bill! But you can act smart and take the BMTC Volvo AC bus instead.
And yes, it is official, the weather gods in Bangalore are ever scheming; they love playing mind games with you, so always carry an umbrella, some warm clothes and a sun tan lotion in your bag. If you are really lucky, you will use all three the same day.
Just because you weren’t born in this city doesn’t mean you are not a Bangalorean. Samosapedia finds that most Bangaloreans dont seem to come from Karnataka at all! These days, anyone who isn’t from Bangalore is actually a Bangalorean, and as long as you can coolly say “Kannada Gotilla” (I do not know Kannada), “Swalpa adjust maadi” (please don’t mind), you classify to be in this category. It’s almost a style statement in the city, although the locals will just use this to rip you off, the ‘high-society’ thinks “you’re in, maccha”.
How can we talk about Bangalore and not talk about the IT revolution in the city? Every other person in the city is an IT professional. It’s easy to find them, they do not know how to drive, they not know where they are, and they stare at a menu card for 15 minutes before they figure out what’s on it. Of course not all of them are Bangaloreans but if you do find a Bangalorean in this ever increasing population of techies then just ask them how many languages they can program in and how many they can converse in. On an average the answer would be 4 in each category.

You will find people from almost every place on earth in Bangalore, most of them constantly complain, but the rest are more optimistic. However it’s interesting to note that all those people who complain about this city would never leave it. They’d brave the Auto Rajas, gulp down those hot idlis, sip by-two coffees, and add to the traffic woes instead of packing their bags and going home. Maybe that’s because even they know that as long as you are a Bangalorean, you’re part of the coolest crowd and everybody else on this earth is super jealous of you.

The Significance of Indian State and City Names

Books are said to be a person’s best companions and in my case some natural history classics and popular science books proved to be a life line, as I will explain shortly.
Read more
Nostalgiphilia

Mukherjee was a champion of “middle of the road”, light- hearted and humorous takes on the everyday struggles of a middle-class man. Here are Some Beloved Hrishikesh Mukherjee Classic Comedies
Read more
Nostalgiphilia

The paan, though not as sophisticated as the advantages and traditions associated with betel leaves, nonetheless, impacts a strong cultural landscape. There are however, two sides to it.
Read more
Nostalgiphilia

Chittorgarh, Rajasthan. Although an important heritage site in India, declared a UNESCO World Heritage Site in 2013, the renown of Chittorgarh is spread far and wide, more so because of the myths and legends associated with its history.
Read more
Nostalgiphilia