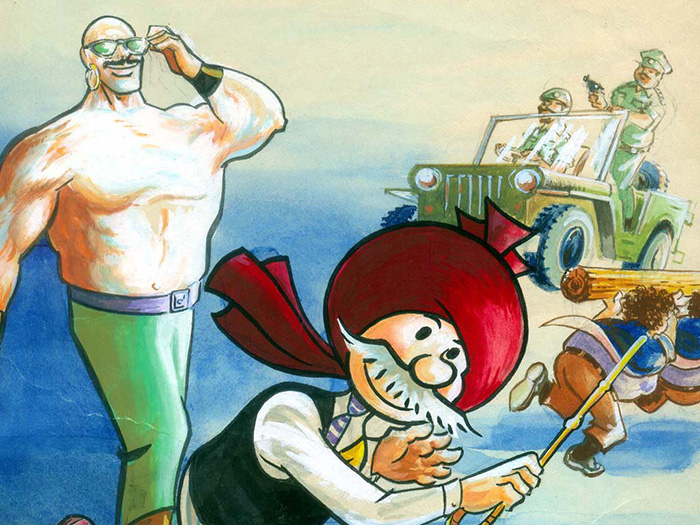 It goes without saying that with the demise of the father figure of Indian Comics – Pran Kumar Sharma, a part of our childhood would also be no more. Pran had created a fantastical world of Chacha Chaudhary, filled with delightful characters such as Sabu, Billoo, Pinki, Raaka, Shimatiji, Raman and Channi Chachi that had won hearts of millions. As children, we would eagerly wait for the next edition and grab a copy of his creation every month.

It was way back in 1969, when Pran first sketched Chacha Chaudhary for a Hindi magazine Lotpot, which made him well-known. Chacha Chaudhary was created at a time when the only comics available to Indians were foreign publications like Superman, Batman and Phantom. In the 1970-80s, these foreign publications created such an influence there was an illusory aura of muscular and good-looking superheroes. In order to break the stereotype, Pran desired to go beyond unrealistic characters. He wanted to create someone who was essentially Indian, down-to-earth, and not-so-powerful like his western counterparts. To craft such a unique inimitable character, Pran took inspiration from Chanakya – who is known for his intellect.

It was important for Pran to create an image of an Indian superhero, who was a simple and realistic commoner dealing day-to-day problems with ease. The initial image of Chachaji was that of a village simpleton who wore a turban with dhoti kurta and used to carry a laathi along with him. He used to fight off petty criminals, conmen and thieves. However, with changing times, Chacha Chaudhary’s image changed too.

Soon we saw him in his modern avatar – a man wearing vest, tie, shoes, sporting a walking stick and fighting present day burning issues such as plane hijacking, terrorism, bomb blasts and so on. Over time, his characters took on modern technologies like mobile phones and computers as well. The only thing that remained intact was Chachaji’s turban and his moustache.

Pran believed in embracing the changing times not just fearlessly but also elegantly. To keep up with time, he switched not only from manual colouring to digital tinting, but also used new media like computers, television and radio to reach out the masses.

Pran’s career graph was quite dynamic. In 1960s, cartooning was not considered a lucrative profession. Hence, there were no special courses to get into this field. Those cartoonists were already well-established like legendary cartoonists of India, R. K. Laxman, Abu Abraham and K. Shankar Pillai, were all self-taught. Their illustrations were serious, focusing mainly on social and political issues. Even though Pran took an inspiration from them, he wanted to try a different genre of cartooning, hence he opted for comics.

Pran began cartooning for a Hindi publication, Daily Milap. To start with, Pran created pocket cartoons that were mostly political. Soon he thought of creating something unique, and he came up with an idea to make cartoons using lines from poems by famous poets of his time like Ramdhari Singh Dinkar, Sumitranandan Pant and Nirala. When he approached Dharamveer Bharati, the editor of Dharmyug, he was thrilled with the idea and named the series Kavita Cartoon, which soon became popular.

To get his cartoons published, he approached newspapers as back then there was no concept of comic books. Initially, only a couple of newspapers showed interest in his cartooning, but soon leading dailies like Punjab Kesari, Navbharat Times, Karamveer began publishing his cartoons. Even though the pay was low, Pran enjoyed cartooning.

It was only in the 1980s when Diamond Comics approached him for compiling his cartoon strips that were published in various newspapers and magazines into a book form. To begin with, he gave them content for two 45-page comic books. He received good response with all the prints sold out within two weeks of their release. There was no looking back since then. Diamond Comics not only gave him a platform to be famous, but also gave him a stable source of income for survival.

Today, Pran has over 600 comic books and 200,000 drawings to his credit. In fact, two episodes of Chacha Chaudhary have been acquired by the International Museum of Cartoon Arts, USA. In 2005, Sahara TV, an Indian television channel approached him to adopt Chacha Chaudhary into a serial, in which Raghuvir Yadav played the lead role.

Over the years, Pran had become internationally well known that in 2006, Pran was invited by the Cartoonists Society of America in Chicago to deliver a lecture on the subject of comics. Two film documentaries – ‘Chitrakatha’ and ‘No Kidding’ had rough cut interviews of Pran in which he talked about his creation Chacha Chaudhary, how and why he became a cartoonist and how the plots as well as characters of Chacha Chaudhary kept adapting to the changing times. This year at ComicCon Delhi, Pran was awarded the Lifetime Achievement Award.

Today, my heart fills with sorrow when I realise that the man who made our childhood so memorable is no more. His creations not only made us curious when he incorporated various features like Aankh-Micholi, Saptu, Chor Police and Beer-Bhahuti into his comics, but also brought immense happiness in our childhood, which is irreplaceable!

The significance of Indian State and City Names

Books are said to be a person’s best companions and in my case some natural history classics and popular science books proved to be a life line, as I will explain shortly.
Read more
Nostalgiphilia

Mukherjee was a champion of “middle of the road”, light- hearted and humorous takes on the everyday struggles of a middle-class man. Here are Some Beloved Hrishikesh Mukherjee Classic Comedies
Read more
Nostalgiphilia

The paan, though not as sophisticated as the advantages and traditions associated with betel leaves, nonetheless, impacts a strong cultural landscape. There are however, two sides to it.
Read more
Nostalgiphilia

Chittorgarh, Rajasthan. Although an important heritage site in India, declared a UNESCO World Heritage Site in 2013, the renown of Chittorgarh is spread far and wide, more so because of the myths and legends associated with its history.
Read more
Nostalgiphilia