Children and Technology – a childhood lost? 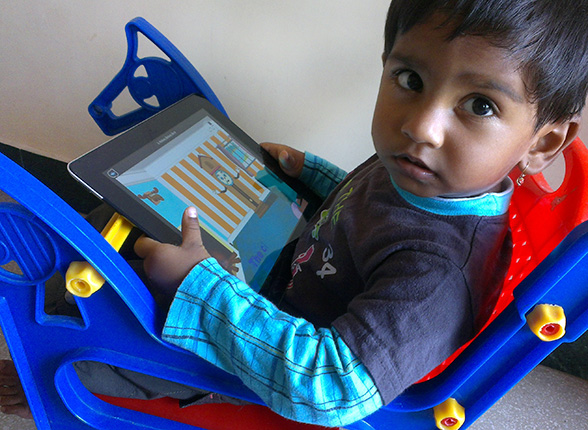 Any parent belonging to the current generation will agree that technology is playing a major role in a child’s upbringing. To think that till 1980s (early 1990s too), there was practically nothing else a child could do except playing out with friends or going out to a movie with family. Only other entertainment was of course comic books and teenage books (like Enid Blyton, Nancy Drew and Hardy Boys). Coming to the current Millennial generation, what options do our kids have? If we start listing them we can easily fill out a book.

Technology has sort of opened up lots of ways in which children can ‘entertain’ themselves. Now, every other child over three years knows what an iPad or a Smartphone is. A child of five understands that he/she can search his/her keywords via a search engine on the internet! How about games? We all know how children love their PlayStations, Xboxes, Nintendo Wiis.

Children and technology have become inseparable and to add this collection is the idiot box! Adults have no choice but to give in to their children demand for TV and gadgets, because they have become a part of their lives as well. (what with most of them being software engineers!) . Where is all this leading to?

Past times of childhood

The children of an older generation had very few options. How many of us remember finishing our homework and going out to play with friends… Be it cricket, volleyball, carom, or any new game, or those get-togethers in the park. The television entered our lives in the 1980s, but with a single channel – Doordarshan! Cartoon programmes came just on Sunday mornings and we as children waited eagerly for this hour of entertainment and cherish it till the next Sunday. Even other children programmes (like Vikram-Betaal or Malgudi Days) were telecasted only once a week. No wonder none of us have forgotten even one episode of those programmes. They were like the few pearls found in a vast ocean, which had to be cherished. And indeed it is still being cherished.

Nancy Drew was like a buddy to everybody even though none of us had met her! Amar Chitra Katha, Tinkle comics and Diamond Comics led from the front in entertaining the child. Characters like Chacha Chaudhary, Shikari Shambu, Suppandi are etched in our hearts like the carving on a stone. The shelf life of these comics was that strong. They were not only entertaining, but also added to the child’s knowledge bank. A friend states about how he learnt the whole Puranas by reading Amar Chitra Katha alone! So there you have it – occasional TV, books and lot of friends. Quite enough wasn’t it? But things changed drastically right?