Delhi University has been finding its name in the newspapers almost regularly these days: be it due to the confusion regarding the Four Years Undergraduate Programme (FYUP), or because of the Vice-Chancellor’s “to resign or not to resign” issues, or because of the high cut-off percentages that can formidably challenge Dettol’s 99.9% germ-killing assurance. So, as a DU-alumnus, it becomes necessary for me to highlight the non-academic aspects of the varsity. Yes, DU is not just about sky-high marks and lectures in derelict buildings; it is also a foodie’s paradise.

FOOD! Cheap food. Yummy food. A wide range of food. All of it can be found in DU. Having been a part of the north campus, I shall focus primarily on the variety of food haunts in Delhi University that the seeker of both high-end and downright cheap food can visit.  To begin with, the area between the Faculty of Arts and the Faculty of Law was our favourite haunt. If you are looking for proper meals, you will be disappointed. This is where students go between classes to drink cardamom tea, dig into piping hot samosas and bread rolls, munch on chips and cold sandwich and hold lengthy discussions on every topic under the sun. 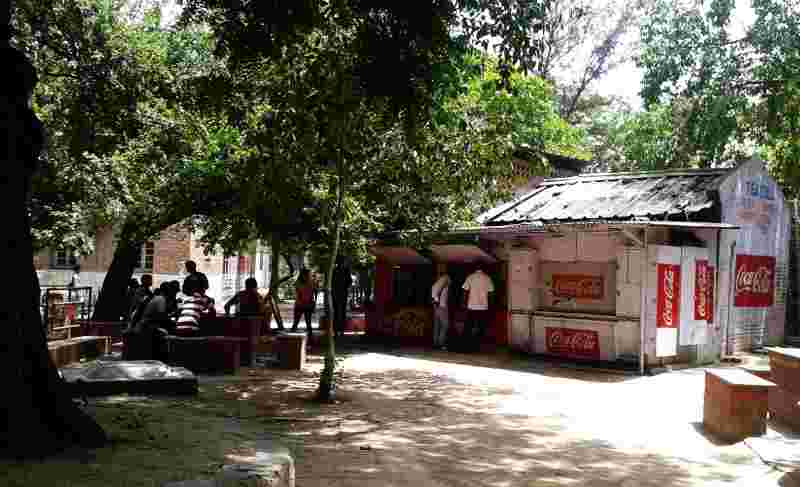 There are two or three benches, a few circular metal tables that are not yet broken and cement slabs where students sit and pontificate on Marxism, Feminism, Modernism, Writ jurisdiction, the Civil Codes, and gossip about who is dating whom, whose car got impounded etc., while the campus dogs sniff the bins looking for leftover. The two best advantages of this place are: it is shaded by a number of trees and is close to the classrooms for those who don’t wish to be late for their lessons.

The tiny shop that sells the tea and snacks is referred to as Nandu ki Chai although who Nandu is, remains unknown to most of us. Just next to this is a juice-wala whose pomegranate juice (at least that’s what he called it) was a favourite with many of us. These places are cheap not only in terms of cost but also in appearance. Clearly not a place for snobs; but experiencing this cheapness is also being a part of DU. Plus, with the money that a student has saved, he/she can buy clothes in the Kamla Nagar roadside stalls! 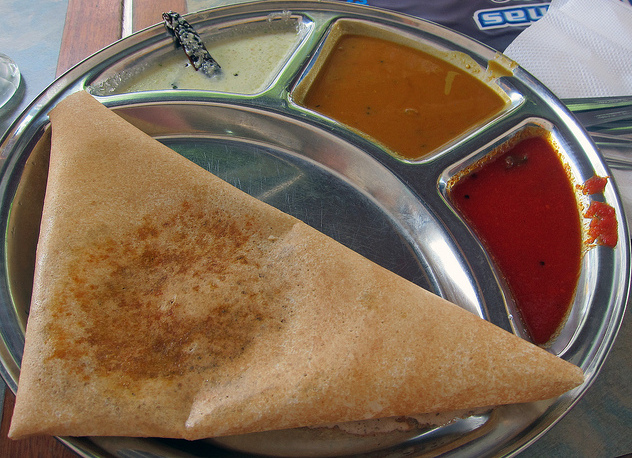 Another place that was a favourite back when I was a student is the canteen at Delhi School of Economics. Among others, you will find a man popularly called Baba who serves meals, calculates the balance and shares quips with the horde of hungry students. The DSE canteen has proper seating arrangement and is quite hygienic as compared to other places in the campus. Students also take their plates and sit on the steps or under the trees sometimes.

This place is famous for its mutton dosa and egg fried rice. While the quality of the dosa is debatable, the very fact that you get mutton dosa at such a nominal rate will make you return to DSE canteen over and over again! The atmosphere, too, is warm and welcoming, regardless of which college you belong to. The J. P. Tea Stall just a few paces away from the canteen is also worth checking out.

Irfan’s Maggi Point is another must visit for foodies. This tiny joint is in Shri Ram College of Commerce (SRCC). So what if you couldn’t make the cut-off and join SRCC? You can still enjoy its maggi. This is not a part of the canteen or the college establishment; it is simply an overcrowded thela that delights students, especially in bone-chilling winters, with uniquely flavoured maggi noodles.

St. Stephen’s is one of the few colleges in DU which has a canteen with a non-veg menu. It is known as ‘breakfast café’ by the students and it appeals to the taste-buds of everyone who belongs to DU North Campus. The café is pleasantly lit, clean and has proper seating arrangement. However, do check the timings before you visit because unlike most other college canteens, the breakfast café does not remain open throughout the day. This place is known primarily for its spicy cutlets that can be enjoyed with strong coffee.

A quick reminder to the first time visitor: do not miss taking a look at the church of St. Stephen’s. While it is neither large nor grand, its gothic architecture and beautiful stained glass windows are worth seeing. So, eat those cutlets, sip that coffee and gaze at the warm, red-brick architecture of the college and the church which is far superior to the derelict, falling-apart buildings of the rest of the university.