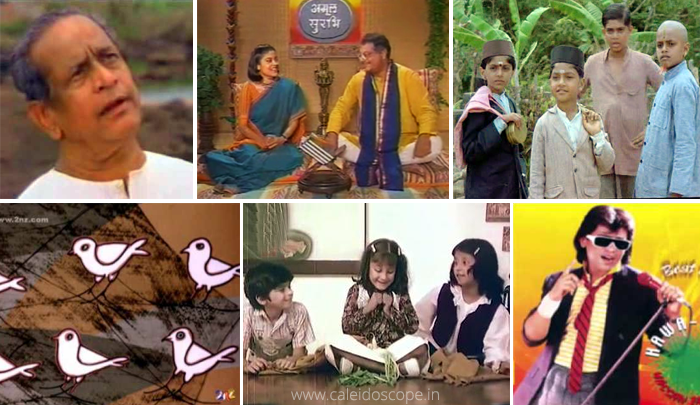 Rain always takes us back to our childhood and gives us the goose bumps of nostalgia. Breezy weather and mouthwatering hot pakoras; what a time it was! As young kids we were connected to many little things which gave us immense pleasure. One such pleasure was watching our favorite TV shows on Doordarshan, the only Television Channel back then.

Here is a list of TV shows and snippets that gave us the meaning of true entertainment in our childhood and now, became the reasons of nostalgia.

One of the best shows produced by Doordarshan. The anchors Siddarth Kak and the lady with a Million dollar smile, Renuka Shahane presented the show in a down to earth manner. This is the best show which spread gyan along with entertainment. And the heaps of letters that people wrote for the contest, hoping to be a winner at least once.

This song echos in my ears to this day. I believe most of the youth who connects with this era can sing the whole song with ease, though we used to be annoyed sometimes when Doordarshan guys would play it at a few crucial times.

How can one forget “Ta na na nana nana ne…”? Swamy’s pranks were so much fun to watch; and even though this show was aired late in the night, I bet most of our generation woke up to watch every single episode of Malgudi Days.

This song with animated visuals was just like a pickle, it used to come once in a while but the jingle stayed on the tip of our tongue. Most of our pals used to murmur this on the school campus “Ek gilahari…Anek gilahariyan…”

This song is a favorite one for many of us due to its peppy music and the wooden horse in the video. I bet most of you danced for this song even without your knowledge.

He was the Indian Sherlock holmes, Each episode of this show created a big debate on school campus and each one wished he was a detective just like Byomkesh Bakshi..

TaleSpin was the best cartoon series that aired on Sunday afternoons, in fact a good Sunday special meal is prepared to go with the show,as even our parents seemed to enjoy it. Characters of this show Baloo, Madam Mahalingam, Kit, Carnage the Villain, and last but not the least, Baloo’s Seaplane still hold special place in our hearts.

Another show that aired along with Talespin, DuckTales included adventures stories of the Richie rich,  Uncle Scrooge and his three nephews Huey, Dewey, Louie, and the Beagle Boys always after Uncle Scrooge treasure chest.  This still remains one of those shows we still watch on youtube.

I have strong connection to this song, it fills my heart with positive energy even today, and I hope it does the same for some of you as well.

Last and the most special one, this is  the only pop song that was mostly performed on stage. I bet all the music systems back then had played this song at least once in their life span.

Went back down the memory lane? Well share your nostalgic experiences with us leave a comment to support..