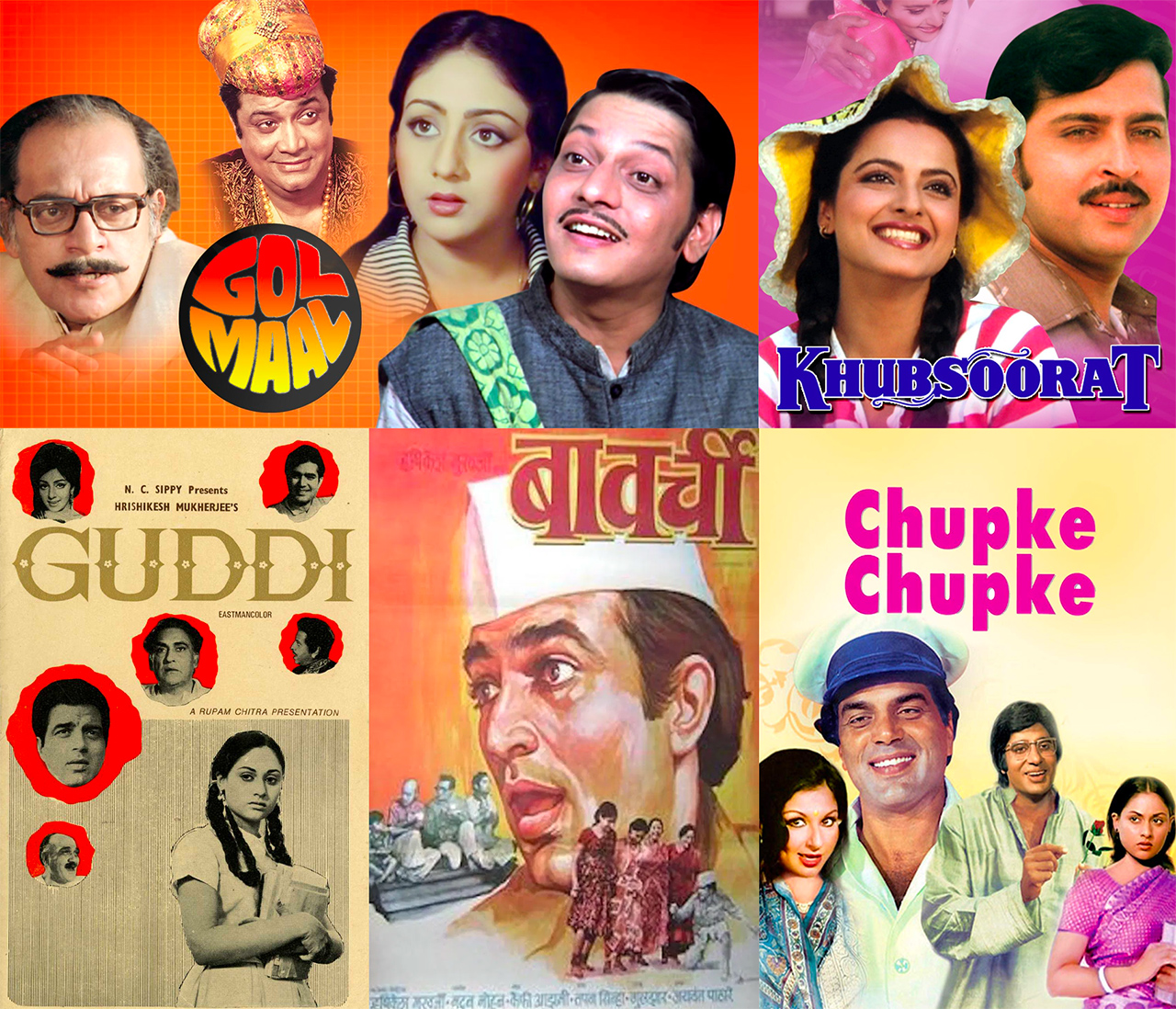 A school girl catches another show of Anupama even if it meant lying at home. In her unwavering love for the yesteryear heartthrob, Dharmendra, notions of right or wrong often faltered. She has a girl-next-door look about her. Not peeling her eyes, she stares fondly at the screen as the actor melancholically sings out Ya kil ki suno duniya walo.

Crooning the famed lyrics, she dashes home and stumbles in. Taken aback is her elderly father who was playing a game of chess with himself. Books strewn across the bed, perched upon one is a thick rimmed glass, fresh breeze swaying curtains back and forth in a silent rhythm.

The father breaks into a conversation with her on the wide screen, slowly fading the lines between real and reel. The 1971 blockbuster, Guddi was one of the many evergreen gems amongst a score of surreal directional masterpieces by the revered filmmaker, Hrishikesh Mukherjee. He was credited for pioneering a timeless new age cinema centring regular people.

Mukherjee was a champion of “middle of the road”, light- hearted and humorous takes on the everyday struggles of a middle-class man. He started off his career by working with the great Bimal Roy and later on helmed 40 plus films.

While Mukherjee’s tearjerker, critically acclaimed films highlighting life’s tragedies inspired hope, his comedies emerged out as a separate winner where there was no place for slapstick or vulgar humour.

Instead, they were a simplistic, soulful laugh fest about a bygone era that is years apart from the tech obsessed times of today. These films draw a nostalgia lover in with a relevant social message wrapped in warmth as though coming from a doting grandparent, gently nudging one down an emotional memory lane.

Listed below are some such beloved comedies from Mukherjee.

The masterpiece that still holds profound life lessons, is a story of many homes. Outside this residence, it says, Shanti Nivas. Hilariously ironic as it is rather a chaotic household held together by cooks, different each time, till they grow tired of the members’ biddings and run off! The film gives a true taste of an extended family. From every object under their roof to their demeanours, banters, bickering, covert affections, all seem to be plucked out of reality. The sarcastic grandfather constantly tries to straighten his sons out. Chanced upon is their new, multitasking cook, portrayed by the flamboyant Rajesh Khanna, turning their lives around with his charisma. 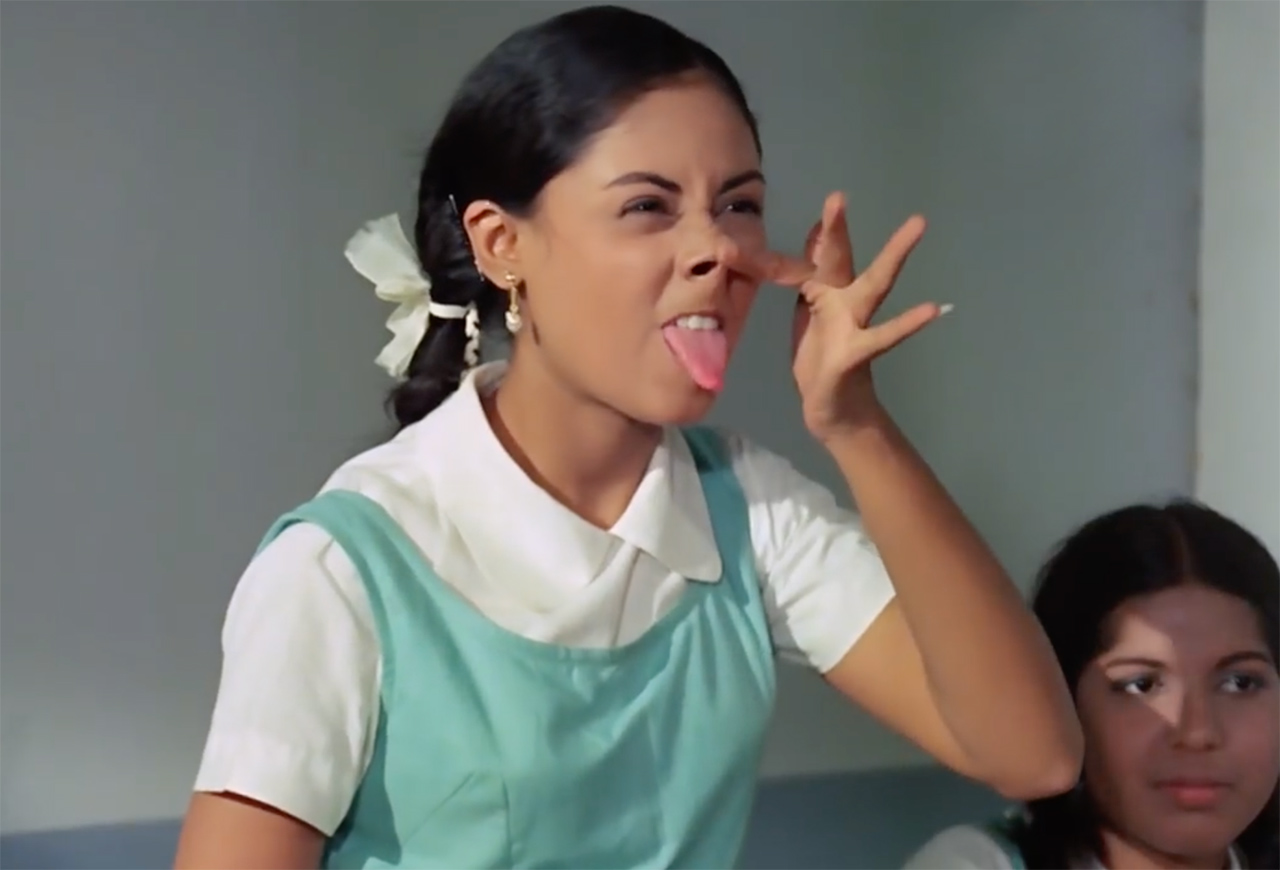 Crushing on a superstar is almost synonymous with adolescence, but in her first outing in Bollywood as an adult, Jaya Bachchan as Guddi, takes it a up a notch. That strains her relationship with the boy who has lost his heart to her. Utpal Dutt and Dharmendra team up secretly in this feel-good family entertainer to rescue the anguished lover as well the sweet, naïve girl, who is oblivious to the obscured realities of the world behind the camera. 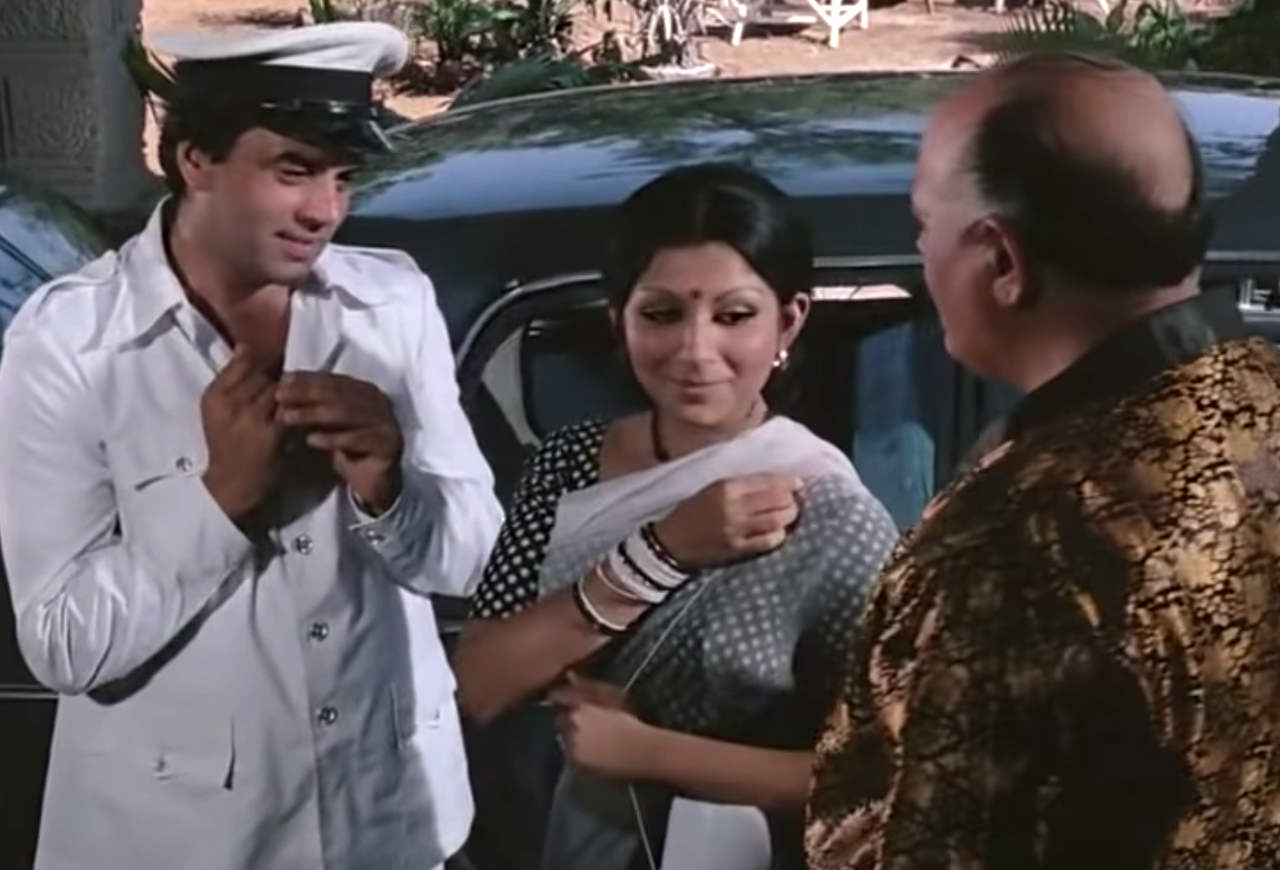 Much happens on this multi-starrer journey, equipped with wit and quirkiness in the appropriate ratio. Most people have a soft spot for Chupke Chupke, a remake of a Bengali film starring Uttam Kumar, rendering it an ever-growing fan base. Many admirers of Mukherjee’s work, go all praise at the sheer genius of this comedy. With his famous beaming smile, Dharmendra, who is an upbeat professor, resolves to playfully one up his wife’s multitalented brother-in-law, Raghavendra (Om Prakash), who speaks and likes unadulterated Hindi. A few scenes after, Dharmendra enrols as Raghavendra’s driver, chit-chatting in Hindi of a surpassing proficiency, irking the brother-in-law. Amidst the leg pulling, pranks, confusions, Prakash’s exasperation is through the roof when Dharmendra suddenly starts rattling out Urdu, leaving the fans in splits! 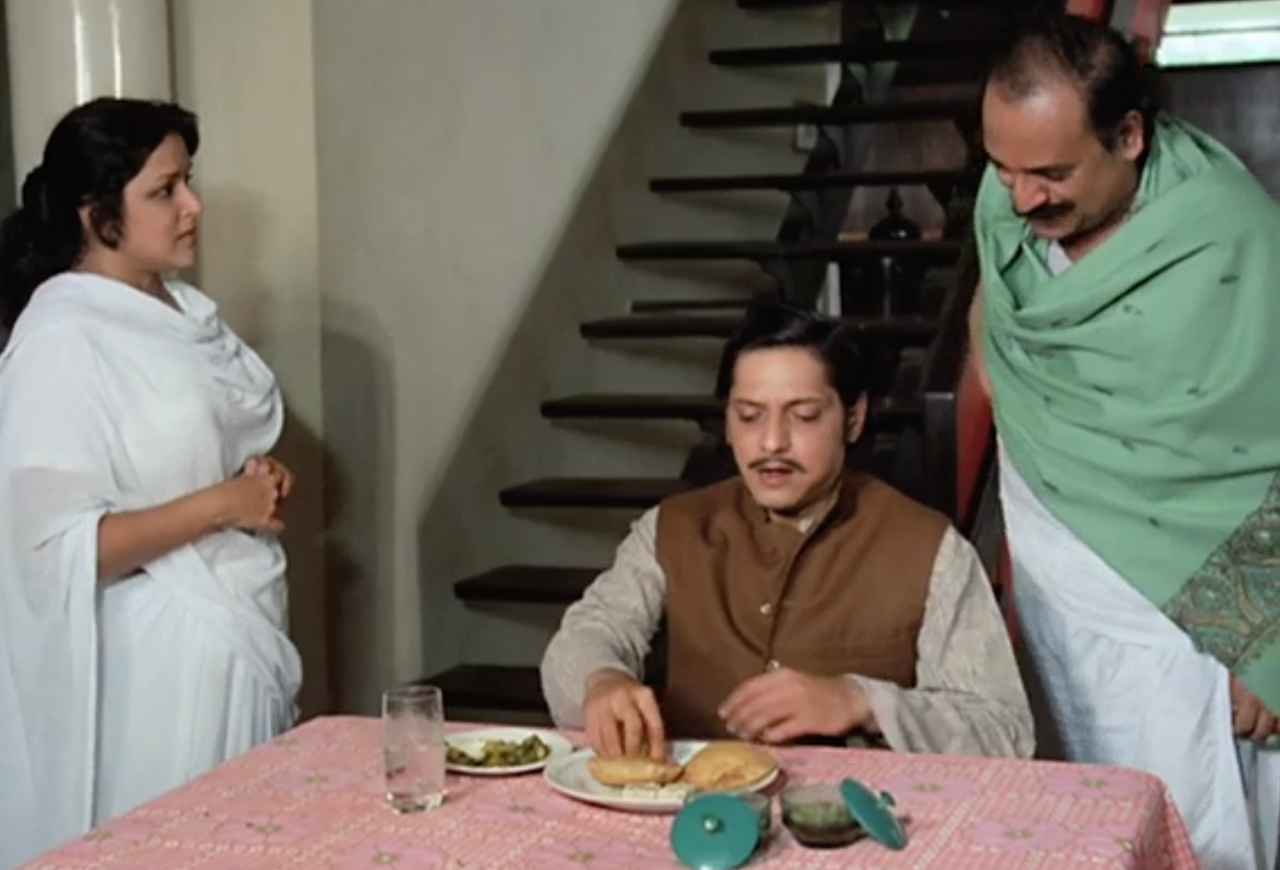 Amol Palekar, the realistic cinema superstar leads this rib-tickling ride in two opposing roles. Unemployment forces Palekar to turn to lies for winning over potential boss Bhavani Shankar (Utpal Dutt). Dutt’s stunning grip on his roles and unmatchable crafty comedy often takes people on a wistful nostalgic journey. Shankar detests westernised thinking and men without moustaches! So, when a pencil moustached Palekar appears for the interview, donning kurta-pyjama and a dislike for sports, he is hired immediately. Trouble in paradise arises after Shankar spots a no moustached Palekar engrossed, all smiles and relishing a game of hockey! 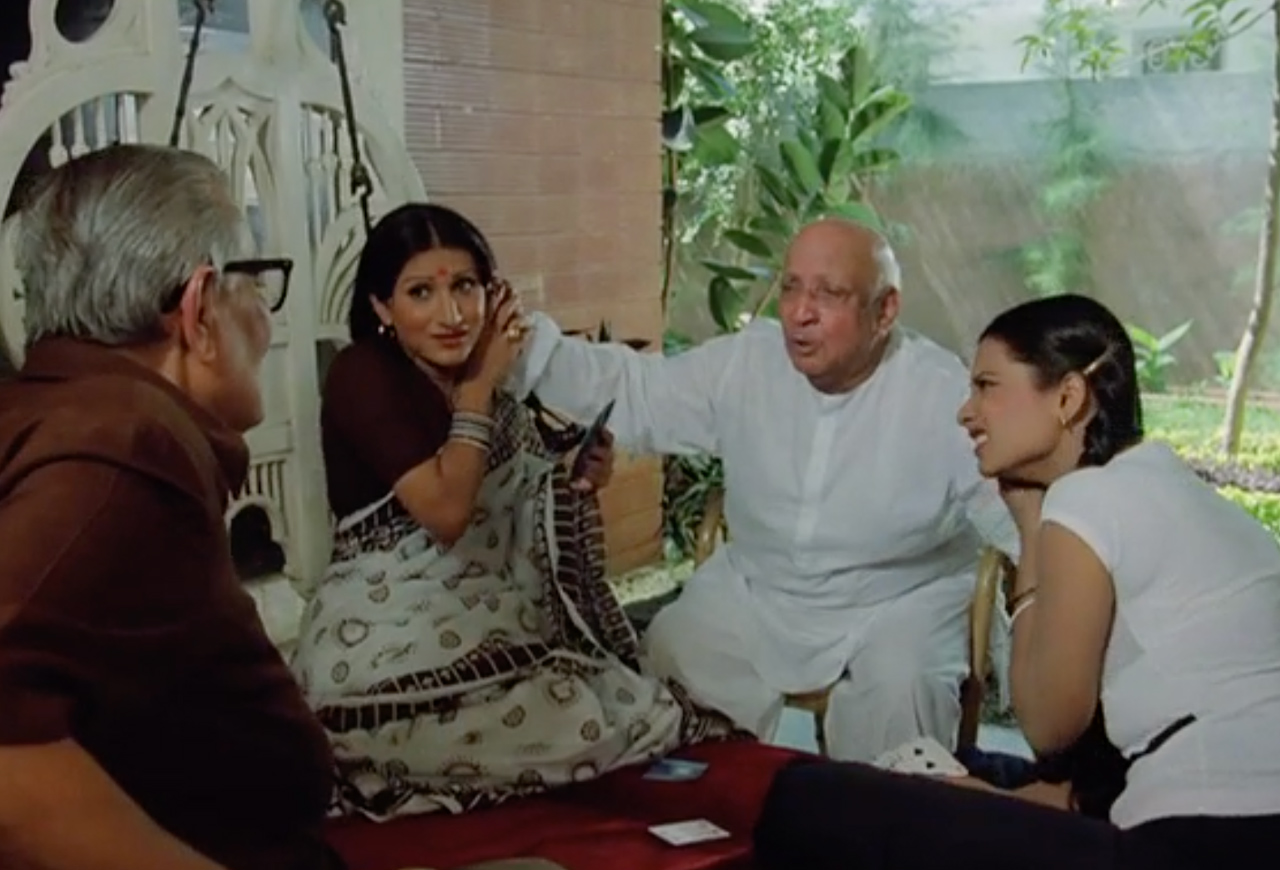 Dina Pathak as Nirmala Gupta, is a stern, overtly disciplined lady of the house who keeps everything under her supreme control. This obsession stems from the concerns for the well-being of her family. Enter, Rekha, a bubbly, happy-go-lucky girl and things begin to tumble. Abundance of never-ending rules catch her off-guard, tickling her rebellious side. She takes it upon herself to help members embrace their hobbies which had died down owing to strictness. Amidst laughs and gasps, somewhere in this film that had an advanced outlook owing to the changing times, Pathak leaves us with a thought-worthy musing. It is not that freedom is bad, but people usually tend to forget the responsibilities that come with it.