The Goddess of Monsoon 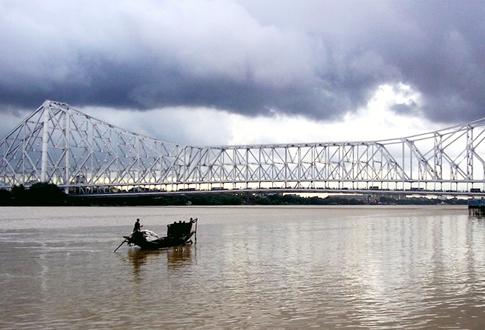 Wisps of hair glued to their foreheads, clutching multihued or black grandpa-umbrellas, rolled up trousers; wading through knee-high waterlogged streets; women in drenched saris frowning, eyebrows arching in slight annoyance; muddied wet shoes and sandals; these and hundred other such vignettes frame the city of Joy, Kolkata when the goddess of monsoon arrives. And she will be here anytime soon. Streets will overflow like Lilliputian-rivulets. Taxis and smaller cars will refuse to ply into inundated streets. Rickshaw pullers will almost swim across streets; buses, trams, larger vehicles will continue to commute as on any other day.

During the monsoon, life parades itself in half-a-smile and half-a-frown, through the busy bylanes of Kolkata, as everyone will now rush to their offices early in the mornings and scurry back home in the evenings. Small town and village dwellers shall peek through rain-smoked bus-windows, while travelling to the city; and any discomfort from crowding seats and bus alleys will evaporate in the first smell of wet mud.

Galleries of iridescent bougainvilleas, piled atop rising bungalows, perfumed jasmines inchoately hedging boundaries, flurrying nectar seeking bees and birds, house crows, will be forgotten in sheets of rain, as they too will hide under man-made windowpanes, abandoned huts, and perhaps will be remembered more so due to their absence, in the marginally annoying but immensely loved monsoon showers.

I can’t forget that Kolkata lives by the Hooghly, its mother. Hooghly flows along, mystically, in rhythm with the abundant dark clouds overhead. The residents of Kolkata coexist in harmony with their mother, who smiles and swells along with the dark clouds for four months between June to September, at a stretch, as though her own. Therefore, life by the Hooghly will continue to survive too. Steamers, wooden boats, will run along the monsoon currents; temples by the river will remain open; deities will bless those who come to visit despite the rain, and even those who don’t! Hooghly will transform from a docile goddess to Maa Kali, albeit, almost, in a loving manner. 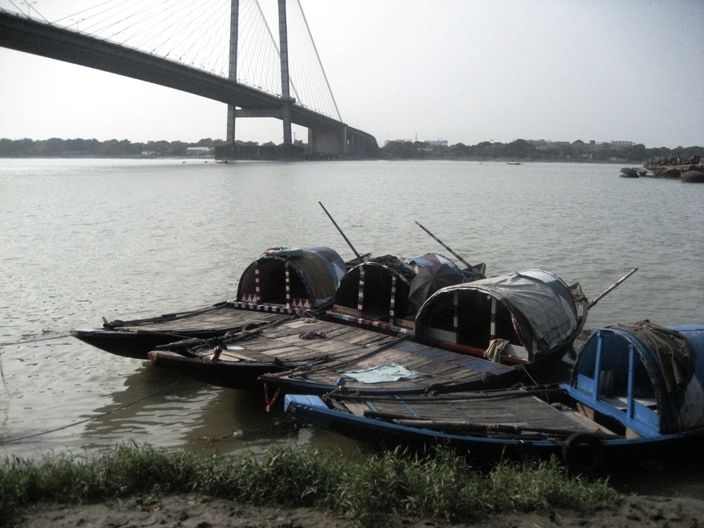 A boatman may smile, not sulk, when he speaks of the monsoon. His heart shall say, “The Goddess of Monsoon arrives – mounted on horse-like-clouds, dismounting in fury, week after week, in mayhem; but her mayhem we hope is sublime, because she seeks to soothe us too, giving us respite from the scorching months of summer.”

The fisherman must catch fish, the boatman must ferry his people from one side of the river to the other, even though it pours, even though Hooghly wells up in monsoon pride, because that is how it is year after year.

Bridges that seek to play upon Hooghly’s surface in an arch too, shall stand unmindful of any monsoon fury, their colossal size, bearing resemblance to Goliath’s or Samson’s heroic feats of yore. Just like the undiminished spirit of the city-people of Kolkata, in spite of incessant rainfall, chronic traffic jams, water-logged lanes everywhere, the spirit of the townspeople living close to the suburbs of Kolkata, by the Ghats of Hooghly, shall remain unscathed.

The winter months in Kolkata, are perhaps the most liked. The months of humidity and heat, are also something Kolkata-bashi bear with a smile playing across their lips. After being part of the city for several years now, and having witnessed the city’s survival ploys in some extreme weather conditions, I do understand how each season tests the eternal spirit of Kolkata. And the Monsoon Goddess, perhaps, is a not-so-soft invigilator. Yet, every year, the people of Bengal, thrive in any condition.

Every year, the monsoon leaves an imprint; it makes not only me, but every other city-and town-village-inhabitant, anxious. The first showers have almost begun. This evening I saw lines of translucent beads drawing waves in the air, and a film of water on the ground. The Goddess at present waits like a shy girl at the threshold, speaking in low tones, but I do know, the blue skies will soon lift her up, and in the greying clusters of strong mist, she will rain upon Hooghly and on the city that lives by it. And magic will ensue.

All You Need To Know About Vibrant Kalighat Paintings of Kolkata